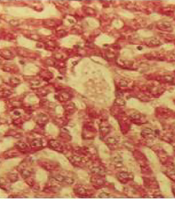 An association has been reported between hepatitis and glycogen storage problems. Glycogen storage disease (GSD) type I is induced by G6PD deficiency. Silymarin and baicalein, as herbal agents, have hepatoprotective and antioxidant potentials.

In this study, we assessed the effects of these herbs on liver glycogen storage problems and hepatitis.

Twenty male rats kept under standard laboratory conditions were divided into four groups, including healthy (control) and hepatotoxicity treated with silymarin, baicalein, or none. The levels of ALT, AST, ALP, LDL, HDL, VLDL, TG, Cho, IL-1β, IL-6, and TNF-α were measured, and the expression levels of G6PD, CTGF, HMGB1, and P53 were determined. Also, liver histopathology was examined.

Baicalein and silymarin showed anti-inflammatory effects and could control inflammation and necrotic factors, but they did not affect hepatic glycogen storage.

Hepatitis is the inflammation of the liver. Several factors can cause hepatitis, such as viral infections, fatty liver, glycogen deposition in high amounts, etc. Glycogen storage diseases (GSDs) are among the primary liver diseases that can lead to hepatitis. Carbohydrate-rich diets further contribute to glycogen accumulation and hyperinsulinism. A central function of hepatic glycogen, the storage form of glucose, is to regulate blood glucose and fasting homeostasis.

Glycogen storage diseases’ pathophysiology is related to inborn errors of glycogen metabolism. Based on the deficient enzyme and affected tissue, there are at least 24 categories of GSDs (1, 2). Glycogen storage diseases are characterized by deficiencies in the enzymes involved in glycogenesis and glycogenolysis. Among the various types of the disease, GSD type 0, I-IV, VI, IX, XI, XII, and XIV affect the liver. For example, GSD type I is characterized by glucose-6-phosphate dehydrogenase (G6PD) deficiency, and patients with this type of GSD are unable to break glycogen into glucose because of having inadequate G6PD or its mediating transporter. Type III GSD is a metabolic problem caused by thee deficiency of the glycogen debranching enzyme, amylo-1,6-glucosidase, resulting in glycogen accumulation, hepatomegaly, and cardiomyopathy, and in turn, cardiac failure. Type XV presents with myocarditis and even evokes left ventricular arrhythmogenic cardiomyopathy (2-4).

Silymarin as an essential component of Silybum marianum (milk thistle), has hepatoprotective and antioxidant potentials and interferes with apoptotic signaling pathways in liver cells. Silymarin prevents hepatotoxicity by modulating hepatic apoptosis and necrosis by regulating the expression of proteins such as Bcl-xL. Silymarin as a phytochemical is a standardized mixture of flavonolignans and scavenges free radicals and stabilizes cell membranes. Silymarin has been shown to increase hepatic glutathione and contribute to antioxidant defense in the liver (7, 8). Baicalein is a component of a traditional herbal medicine known as Chinese skullcap and a flavonoid of Scutellaria baicalensis Georgi root that can protect hepatocytes against oxidative stress and death (9).

For the management of chronic liver diseases, more effective treatments need to be developed.

In this study, we investigated the effects of silymarin and baicalein on liver functional parameters and glycogen storage capacity in an animal model.

Twenty male rats (160 - 180 g) were kept according to animal care ethics guidelines for one week before experiments to be acclimatized to the standard laboratory conditions (24 ± 1°C, 50 ± 10% humidity, 12 h light-dark cycle and free access to food and water). The rats were randomly divided into four groups. Healthy (control) group was given no treatment. Three hepatotoxicity groups were treated with silymarin (50 mg/kg/day, p.o.), baicalein (50 mg/kg/day, p.o.), or none of these herbs for 14 days.

Hepatotoxicity was induced in the animals as previously described (10). Briefly, paracetamol (100% purity) was used for inducing liver toxicity. Paracetamol was suspended in 0.5% Tween-80 and given orally (750 mg/kg body weight) to the animals.

3.4. Determining the Levels of Inflammatory Cytokines

The serum levels of IL-1β, IL-6, and TNF-α were measured using ELISA kits according to the manufacturer's instructions.

Table 1. The Sequences of the Specific Primers Used to Determine Target Genes’ Expressions by Real Time-PCR

On the 15th day of the onset of treatments, liver tissues were taken. Half of the tissues were kept in formalin to prepare histopathological sections, which were stained with hematoxylin and eosin (H&E)/ periodic-acid-Schiff (PAS). The other half was frozen at - 80°C for RNA extraction and gene expression analysis.

The data are shown as mean ± SD. Means were compared between the groups by ANOVA in SPSS (version 20) software. Histopathological features were analyzed by the non-parametric Mann-Whitney U test. A P-value of less than 0.05 was considered statistically significant. Graphs were drawn in GraphPad Prism (version 5).

Treatment with silymarin and baicalein significantly reduced the serum levels of ALT, AST, and ALP in the rat models of hepatotoxicity (P < 0.05). Also, the serum levels of LDL, VLDL, TG, and Cho decreased in silymarin and baicalein-treated groups compared with the non-treated group, but these reductions were not significant (P > 0.05). Serum HDL level showed no significant changes in the experimental groups (Table 2 and 3).

aTreatment with silymarin and baicalein had no significant effects on the serum levels of VLDL, LDL, HDL, TG and Cho (P > 0.05). 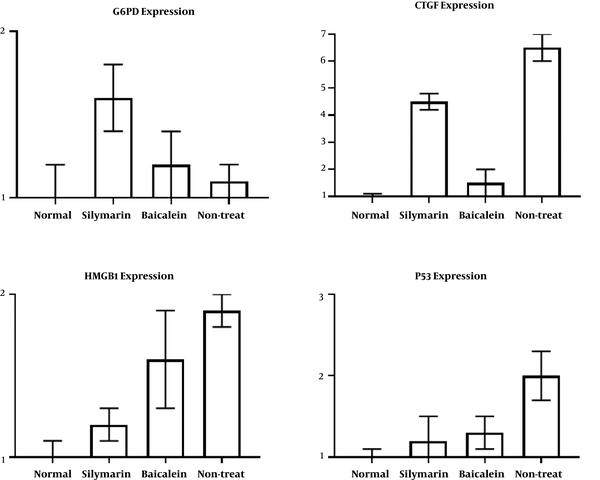 Figure 1. The expression of G6PD, CTGF, HMGB1, and P53 genes was studied by real time-PCR using specific primers. The 18s rRNA was used as an internal housekeeping gene. Silymarin treatment increased G6PD expression (P < 0.05). Both silymarin and baicalein decreased CTGF, P53, and HMGB1 gene expressions. Baicalein had a stronger effect on CTGF than silymarin had (P < 0.05), while its effect on HMGB1 expression was not statistically significant (P > 0.05). 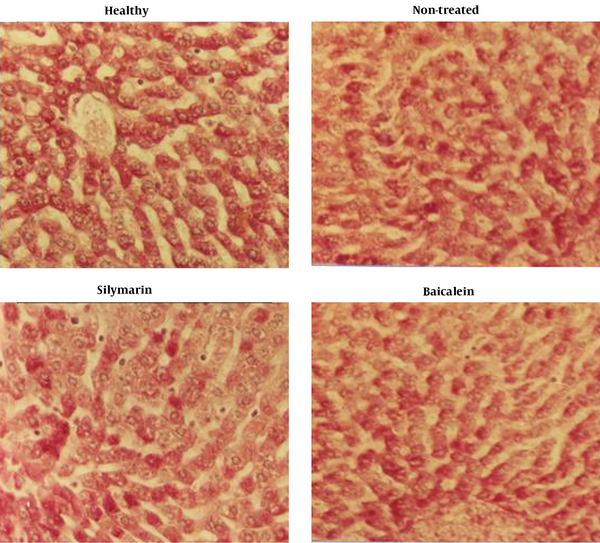 Figure 2. Liver histopathology. Liver tissues were stained with H&E/PAS. Glycogen was stained by PAS. There were no significant changes in glycogen content comparing the silymarin- and baicalein-treated groups with the non-treated group (P > 0.05).

Silymarin is an antioxidant stimulating detoxification pathways. Reactive oxygen species (ROS)-induced membrane damages to hepatocytes can lead to the release of ALT. Silymarin is an effective free radical scavenger that attenuates the production of detrimental bio-active agents and prevents ROS-induced toxicity and ALT leakage. Mitochondria is the primary generator of superoxide that initiates ROS cascades. Silymarin protects cells against oxidant attacks by mitochondrial-released ROS, prevents mtDNA damage, inhibits membrane-active lipases, and preserves the mitochondrial electron transport chain for adenosine triphosphate (ATP) production. Also, silymarin protects intracellular organelles against oxidative stress by conserving antioxidant components. Silymarin stimulates Bcl-xL expression, which regulates Ca2+-release channels to antagonize apoptotic cell death (7). P53 is a sensor of DNA damage and cell death, which is elevated in fatty livers and chemically-induced hepatocellular injury. P53 has been noted to return to normal levels by silymarin, highlighting the role of this agent in DNA and hepatic protection (7). In this study, we found that treatment with silymarin and baicalein reduced P53 expression, indicating that these compounds can protect hepatocytes against injuries and apoptosis.

Silymarin hepatoprotective properties are in part related to the role of this agent in regulating PKCε, ROS, Akt, and mTOR phosphorylation via the NF-κB pathway. Silymarin acts as an antioxidant and radical scavenger and increases the mPTP threshold, which prevents oxidative damage. Silymarin inhibits mitochondrial ROS generation and triggers anti-inflammatory reactions (8). Liver fibrosis occurs due to hepatic injuries and is assessed by measuring liver enzymes. Silymarin, as a hepatoprotective herb, promotes the growth of new hepatic cells and stimulates liver regeneration and detoxification (10). We observed that silymarin and baicalein decreased CTGF and HMGB1 expressions. While CTGF reduction was more pronounced in the baicalein-treated group, HMGB1 showed a higher reduction in the silymarin-treated animals. It was reported that baicalein inhibited the differentiation of fibroblasts to myofibroblasts and prevented pulmonary fibrosis and the production of type I collagen, the main type of collagen fibers, by suppressing TGF-β-mediated type I collagen synthesis in lung cells and inhibiting the expression of CTGF in TGF-β1-stimulated cells. Baicalein also down-regulates CTGF expression via decreasing Smad2 phosphorylation (14). HMGB1 is a non-histone-binding protein and a key player in late inflammatory responses. In hepatic failure, HMGB1 is released from damaged cells and during immune cells’ activation. The inhibition of HMGB1-related inflammatory responses by baicalein improves markers of liver function (15). It was shown that baicalein could regulate 50 hubs of differentially expressed genes in eight signaling pathways (16).

Elevated ALT and AST serum levels can be attributed to the structural damages of the liver. These enzymes are located in the cytoplasm of hepatocytes and are released into the blood circulation after cellular damages (20). Silymarin, after reaching inside the nucleus, activates RNA polymerase enzymes and increases the formation of ribosomal RNAs, restoring normal liver function. Silymarin interacts with cell membranes and prevents abnormal lipid metabolism. Furthermore, silymarin reduces serum nitrite levels in the case of fibrotic liver (20). Baicalein and silymarin were shown to attenuate elevated ALT and AST serum levels secondary to hepatocytes’ apoptosis and necrosis, which are characterized by caspase activation and cell shrinkage (7-9). In this study, silymarin and baicalein decreased serum ALT, AST, and ALP levels in the rat models of hepatic injury. These compounds also reversed elevated LDL, VLDL, TG, and Cho serum levels. Regarding liver histopathological features, we observed that silymarin and baicalein had no effects on glycogen storage in hepatocytes. Although silymarin increased G6PD expression, which can have a potential effect on hepatocytes’ glycogen content. We did not observe any change in the glycogen storage of liver cells in the silymarin-treated rats.

Some studies have indicated that silymarin and baicalein are safe compounds without any dangerous side effects (7, 8, 19). Baicalein and silymarin have anti-inflammatory effects and improve liver function by controlling inflammatory and immune mediators and modulating lipid profile and necrotic factors. Although silymarin can increase G6PD expression, its beneficial role in treating glycogen storage problems should be further investigated.

Regarding the limitations of this study, we did not investigate all liver function parameters, inflammatory markers, immunopathologic mediators, and tissue injury markers. It is recommended to address this limitation in future studies.