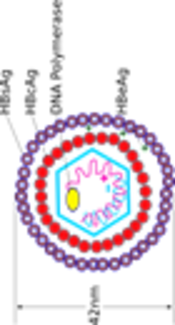 The serum hepatitis B virus (HBV) RNA is suggested as a potential new biomarker of HBV infection. However, it is not fully understood.

The current study aimed at characterizing serum HBV RNA in patients with untreated chronic hepatitis B (CHB) and genotype B and C HBV infection.

A large cohort of 483 patients with hepatitis B e antigen (HBeAg)-positive and -negative was performed. The routine serum biomarkers of HBV infection were tested. HBV genotyping was carried out by direct sequencing. Serum HBV RNA levels were quantified using a method described in the authors’ previous study (lower limit of detection: 66.7 IU/mL).

Serum HBV RNA was detected in 92.5% (394/426) of the patients with HBeAg-positive and 31.6% (18/57) of HBeAg-negative ones; a positive association was observed between HBeAg and HBV RNA statuses in the subjects. Alanine aminotransferase (ALT), HBV DNA, and genotype were the independent predictors in patients with HBeAg-positive CHB (P = 0.024, 0.001 and 0.014, respectively), while it was HBV DNA in the negative ones (P = 0.000) for serum HBV RNA detectability. Serum HBV RNA was positively correlated with ALT, aspartate transaminase (AST) and HBV DNA, regardless of HBeAg status, and with hepatitis B surface antigen (HBsAg) in HBeAg-positive ones (P < 0.05).

Serum HBV RNA may be affected by HBeAg status, serum HBV DNA, HBsAg levels, HBV genotype, ALT, and AST levels. There might be some similarities between the characteristics of serum HBV RNA, and serum HBV DNA and HBsAg, regardless of its distinctive features. The roles of serum HBV RNA in viral replication, infection, survival, disease progression, and antiviral responses need to be investigated in further studied.

HBV is known as a unique DNA virus with a reverse transcription step during replication cycle. The pregenomic RNA (pgRNA) is an important intermediate molecule connecting the parental and offspring HBV DNA. Theoretically, any host or viral factors that increase the production of pgRNA or block the reverse transcription of pgRNA in relaxed circular DNA may cause excess of pgRNA. Accumulating evidences suggest that excess pgRNA might present in virion-like particles and represent the majority of detectable HBV RNA in sera (3) and supernatant of HBV cell cultures (4, 5).

The serum HBV RNA are reported detectable in patients with chronic HBV infection (3, 6, 7) and its clinical significance are also suggested (8-10). It showed that serum HBV RNA dynamics had a strong correlation with HBeAg loss in patients treated with nucleoside-analogue or peginterferon (PegIFN)-α (9). It also showed that serum HBV RNA level is a valuable early predictor for the occurrence of antiviral resistant mutations (10) and reactivation of chronic hepatitis B (CHB) after antiviral therapy cessation (8). Serum HBV RNA is a novel biomarker of HBV infection and is useful to optimize antiviral strategies (9, 11). However, to understand the factors affecting its serum level and detection, and its biological and clinical significance, large cohorts of untreated patients are required.

The current study aimed at analyzing serum HBV RNA in 483 patients with untreated HBeAg-positive and -negative CHB genotype B or C infection, the most prevalent HBV genotypes in China and Asia (12, 13). The study also aimed at finding the potential factors affecting the levels of serum HBV RNA and revealing how it is correlated with the other viral factors, such as serum HBV DNA and HBsAg. The study also aimed at giving a better understanding of this potential new biomarker for HBV infection.

Serum samples were provided from 483 patients with untreated CHB recruited in the current study. They were from registered and ethically approved clinical trials (NCT01088009 (13) and Institutional Review Board of Peking University: IRB00001052-14005). Each patient signed the informed consent. The diagnosis of CHB was according to the 2010 guidelines of prevention and treatment for chronic hepatitis B in China (14). None of the patients had autoimmune hepatitis, hepatitis C virus (HCV), hepatitis D virus (HDV), or human immunodeficiency virus (HIV) coinfection, primary biliary cirrhosis, and alcohol or drug abuse.

The HBV subgenotyping by reverse transcriptase (RT) sequencing was performed following the standard operating procedure of the laboratory as described in authors’ previous reports (12, 15). The phylogenetic trees construction and nucleotide divergence analyses with clinically isolated and reference sequences for known subgenotypes were carried out by MEGA 7.0 software using neighbor-joining method and Kimura 2-parameter algorithm with bootstrapping 1000 replicates. Twenty-four subgenotype reference sequences were extracted from GenBank.

The procedure of serum HBV RNA quantification was carefully described in the authors’ previous paper published in 2017 (16). The procedure included serum HBV nucleic acid extraction, DNA digestion, RT of RNA to complementary DNA, and real-time PCR. Due to the limitation of word counts, the readers are referred to the reference 16 or Appendix 2, patients and methods to this paper, for the detailed information. The lower limit of detection (LoD) for serum HBV RNA was 66.7 IU/mL (1.8 log IU/mL).

Statistical analyses were performed with SPSS version 20.0 (SPSS Inc., Chicago, USA). The Student t test as well as nonparametric and Chi-squared tests was used to evaluate the appropriateness of the data. Logistic regression analysis was used to test the demographic characteristics as well as virological and biochemical factors that might influence the detectability of serum HBV RNA. Correlation analysis was used to study the relationship of serum HBV RNA with transaminases, HBV DNA, and HBsAg levels, in which the LoD values were used for those reported lower than LoD or undetermined. P < 0.05 was considered as statistically signiﬁcant.

Of the 483 patients with CHB, 426 were HBeAg-positive and 57 HBeAg-negative (Table 1). The patients were infected with either genotype B or C CHB. In patients with HBeAg-negative, the regression analysis revealed that serum HBV DNA was the independent predictor (P = 0.000). Although ALT and AST were also found as predictors in univariate analysis (P = 0.000), they were not confirmed in multivariate analyses.

The results showed a significant positive correlation of serum HBV RNA with ALT, AST, and DNA levels (P < 0.05), regardless of HBeAg status (Figure 2). Positive correlations with HBsAg were only found in HBeAg-positive cases (P < 0.0001) (Figure 2D), and not the negative ones (P = 0.454) (Figure 2H). 4.5. Comparison Between Genotype B and C in Patients with HBeAg-Positive CHB Infection

Aforementioned results revealed HBV genotype and HBeAg statuses as the important factors affecting serum HBV RNA detection. However, the distribution of HBV genotypes B and C amongst the 2 groups of HBeAg-positive and -negative samples was not homogeneous. Thus, the confounding factors might affect the data interpretation. The present study provided the phylogenetic trees (Appendix 4 and 5) and nucleotide divergence data (Appendix 6 and 7) for the sequences with defined subgenotypes by the evolutionary analysis. All the sequences obtained in the current study were also submitted to GenBank with accession numbers from MG714927 to MG715409.

The current study found an 85.3% (412/483) detection rate for serum HBV RNA in the studied patients. However, 2 other reports by Huang et al., showed that serum HBV RNA was undetectable in all the 19 studied patients and only found in 40% (21/52) of the untreated ones (11, 17). The difference between the results of the current study and those of others may be attributed to the differences between the studied populations. The patients in the current study had a significantly higher HBeAg-positive ratio (426/483, 88.2%) compared with their patients (33/71, 46.5%) (P < 0.0001). The present study also showed that the ones with HBeAg-negative had a lower serum HBV RNA detection rate compared with the HBeAg-positive ones (P < 0.0001). After excluding the confounding factor of HBV genotype, the impacts of HBeAg status on serum HBV RNA level in genotype C and subgenotype C2 were also confirmed (Appendix 3). It is evident that HBeAg level might be affected by HBV precore G1896A mutation and core promoter A1762T/G1764A mutations (18, 19); A1762T/G1764A mutations were also reported to enhance viral replication in vitro. Patients with HBeAg-negative were more prone to such mutations compared with HBeAg-positive ones. Although the difference of serum HBV RNA detection between the patients with HBeAg-positive and -negative can be attributed to such mutations, further studies on patients with different HBeAg statuses and genotypes may better reveal the underlying mechanisms.

In addition to HBeAg status, the current study indicated that serum HBV DNA level was the only virological factor showing statistically coherent impact on serum HBV RNA level in both groups of patients with HBeAg-positive and -negative CHB infection. Positive correlations were also observed between serum HBV DNA and RNA levels in the study groups. However, the detection of serum HBV DNA could not guarantee the detection of serum HBV RNA, suggesting their intrinsic relationship, but different properties. Results of the current study suggested that the HBeAg status and serum HBV DNA level are the important viral factors affecting serum HBV RNA. Hence, it is necessary to characterize serum HBV RNA during the natural history of HBV infection in order to better evaluate its usefulness as a new biomarker of HBV infection in the clinical settings.

The origins of serum HBV RNA are still under investigation. The current speculations include the immature RNA-containing virion as a byproduct of normal HBV replication and exosome secretion (20). The current study data showed that the serum HBV RNA level was positively correlated with serum ALT and AST levels (Figure 2). This association was more obvious for ALT in patients with HBeAg-positive (Table 2). The high ALT and AST levels were the indicators of hepatocyte injury by human immune responses (21). In this scenario, HBV replication intermediates containing both HBV DNA and RNA are released from the injured hepatocytes. Results of the present study revealed the effect of hepatocyte injury on HBV RNA release. The detection of serum HBV RNA might reflect the outcome of complex viral and host interactions. More investigations are needed to fully understand this.

HBV genotype was identified as another important factor affecting serum HBV RNA level in patients with HBeAg-positive (Table 2). The finding was also verified in the subgenotype B2, C1, and C2 (Figure 3). It has long been known that different genotypes had marked differences in HBV natural history, disease progression, treatment response, and in vitro replication efficacy (22, 23). In terms of genotype differences, the authors’ previous study found that the core promoter transcriptional activity of genotype B was significantly higher than that of genotype C, hinting more production of pgRNA in genotype B (19). Similarly, the log HBV DNA/RNA of genotype B was significantly lower than that of genotype C in the present study (Figure 3B). The genomic makeup of HBV and subgenotype-related mutations might affect the viral DNA, RNA, and protein production.

Interestingly, the serum HBV RNA was never considered as it is today. Studies suggested that it might be a significant clinical novel biomarker (5, 8, 9). Halgand et al., showed a correlation between the detection of pgRNA and cccDNA in tumors, and the absence of tumorous microvascular invasion and better patient survival (24). Wang et al., revealed that the serum HBV RNA level is in correlation with the intrahepatic HBV RNA level, intrahepatic HBV RNA, cccDNA, and the histological scores for grading and staging (25). The current study also found that the pretreatment intrahepatic cccDNA was positively correlated with serum HBV RNA (r = 0.25, P = 0.02) (16). The accumulating evidence suggests that the serum HBV RNA level might reflect the intrinsic characteristic of HBV replication resulting from the net efficiencies of pgRNA production, reverse transcription, and hepatocyte injury as well.

In conclusion, the current study found that the existence of serum HBV RNA can be a general virologic marker for patients with HBeAg-positive CHB infection, but not the HBeAg-negative ones during the natural history of HBV infection. The serum HBV RNA level could be affected by HBeAg status, serum HBV DNA, HBsAg levels, HBV genotype, and ALT and AST levels. As a new biomarker of HBV infection, it might have similar, but yet distinct, characteristics as serum HBV DNA and HBsAg. Its roles in viral replication, infection, survival, disease progression, and antiviral response should be investigated in further studies.

Copyright © 2018, Hepatitis Monthly. This is an open-access article distributed under the terms of the Creative Commons Attribution-NonCommercial 4.0 International License (http://creativecommons.org/licenses/by-nc/4.0/) which permits copy and redistribute the material just in noncommercial usages, provided the original work is properly cited.
download pdf 594.24 KB Get Permission (article level) Import into EndNote Import into BibTex
Number of Comments: 0