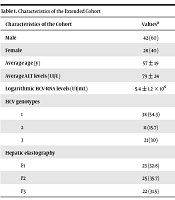 A large number of central nervous system impairments occur in subjects with chronic HCV infection regardless of liver disease. Brain-derived neurotrophic factor (BDNF) plays an essential role in the adult brain concerning its development and proper functioning. Our study aimed at contributing to the discussion on the involvement of BDNF in neurocognitive disorders associated with HCV infection.

Of 70 HCV-infected patients, 42 (60%) were males. The average age was 57 ± 19 years and the average ALT level was 79 ± 24 UI/mL; 38 (54.3%) individuals had HCV genotype 1 infection and 23 (32.8%) and 25 (35.7%) individuals had F1 and F2 fibrosis stages, respectively. Moreover, 67 (95.7%) individuals achieved sustained virological response. The MoCA score at baseline identified four groups of patients. Higher MoCA scores 24 weeks after the end of therapy highlighted the improvement of neurocognitive status in all groups. Serum BDNF levels in the same four groups, measured 12 weeks after the end of DAA therapy, appeared significantly modified compared to baseline serum BDNF levels, matching the improvement of MoCA score results obtained 24 weeks after DAA therapy.

The serum BDNF level may represent a useful marker of cognitive dysfunction in patients with HCV infection and a useful index for assessing the post-therapy follow-up.

A large number of central nervous system (CNS) impairments, including metabolic, inflammatory, and autoimmune conditions, occur in patients with chronic HCV infection regardless of liver disease (1, 2). Moreover, some reports describe the involvement of the peripheral nervous system and muscular tissue, as well (1, 2). In more detail, neuropsychological and neurocognitive functions are frequently reported as altered in individuals with chronic HCV infection, independently of liver fibrosis and severity of the liver disease. These abnormalities occur both in the absence and in the presence of structural brain damage or signal abnormalities on brain magnetic resonance imaging (3).

Brain-derived neurotrophic factor (BDNF), a member of the neurotrophin family, plays a key role in the adult brain respecting neuronal survival, synaptic plasticity, axonal guidance, cell morphology, memory formation, and cognition (4, 5). Brain-derived neurotrophic factor produced in brain neurons acts locally at a synaptic level (6). Variations in circulating BDNF levels may partly reflect its impaired secretion in the brain and reduced brain BDNF levels could be associated with lower circulating BDNF levels (7). The current study aimed at contributing to the discussion on the involvement of BDNF in neurocognitive disorders associated with HCV infection.

This study aimed (1) to evaluate the prevalence of neurocognitive disorders in a cohort of HCV-infected patients, (2) to measure serum BDNF levels in the same cohort according to the degree of neurocognitive disorders, and (3) to evaluate serum BDNF level modification in HCV-infected patients following direct antiviral agent (DAA) therapy.

We enrolled patients scheduled for DAA therapy in January 2018. The participants were recruited from three infectious disease units in Eastern Sicily, including (1) ARNAS Garibaldi Hospital in Catania, (2) Vittorio Emanuele Hospital in Catania, and (3) Policlinic Gaetano Martino in Messina. All patients underwent DAA treatment between February and June 2018. A post-treatment follow-up was extended in all cases between July and October 2018.

The exclusion criteria included (1) liver cirrhosis with Child-Pugh score B or C and/or liver fibrosis stage 4 (F4, liver stiffness ≥ 12.5) assessed by hepatic elastography, in order to attenuate any impairment coming from the presence of hepatic encephalopathy, (2) previous neurological disorders of any cause, (3) interferon-based therapies in the previous three years, (4) addiction to illicit drugs or alcohol for at least six months, and (5) concomitant hepatitis B or human immunodeficiency virus infection.

- From 26 to 30 points: no neurocognitive disorder

- From 19 to 25 points: mild neurocognitive disorder

- From 10 to 18 points: moderate neurocognitive disorder

- From 0 to 9 points: major neurocognitive disorder

A Human Free BDNF Quantikine ELISA Kit (R&D Systems) was used to measure the serum BDNF levels at baseline and 12 weeks after the end of DAA therapy, with a sensitivity limit of 20 pg/mL and an assay range between 62.5 and 4.000 pg/mL. We measured BDNF in the contest of routine blood sampling.

Table 1. Characteristics of the Extended Cohort

Table 5. Serum Brain-derived Neurotrophic Factor (BDNF) Levels of Five Patients with Major NCD at 24 Weeks After the End of Therapy

Laboratory results, showing the presence of HCV-RNA, NS5A, and NS3 in microglial cells and astrocytes, highlighted the fact that HCV has an independent life cycle in the brain (10). This may explain the significant impairments in executive function and attention and the chronic fatigue reported by HCV patients with normal liver function (3). The HCV associated neurocognitive disorders are unrelated to the stage of liver disease and therefore, the features of this condition are different from those complications observed in individuals with minimal hepatic encephalopathy (HE) (3).

Studies reported impaired levels of metabolites in the basal ganglia of patients with HCV infection and mild liver disease (11) and these alterations were different from abnormalities associated with HE (11). Moreover, neurophysiological tests revealed multiple alterations, such as reduced P300 amplitudes and delayed peak latencies, in patients with HCV infection compared to non-infected patients, measuring in this way the subclinical cognitive impairment (12).

This study, like others performed so far (13), documented the impaired CNS function in individuals with chronic HCV infection, independently of the fibrosis stage. Similar results were obtained by Hilsabeck et al. (14), who showed impaired performance in a cohort of patients with chronic HCV, particularly in sustained attention. Other studies have confirmed these findings by documenting the impairment of working memory, sustained attention, and processing speed (15, 16). Forton et al. (17) studied different groups of subjects with chronic HCV infection and found that the HCV-infected group was more impaired than HCV-clear group in neuropsychological tests, independently of the IVDU history. Kramer et al. (12) provided evidence of an association between cognitive impairment and HCV regardless of any history of premorbid substance abuse (18).

Psychiatric diseases such as anxiety, depression, bipolar disorder, post-traumatic stress disorder, and personality disorders are also common in patients with HCV regardless of active or prior psychiatric diseases (19-21). Particularly, all of these conditions may affect the neurocognitive status on measurements of concentration, attention, and processing speed (16). Our findings highlighted a late improvement in cognitive functions in patients who achieved a sustained virological response after DAA therapy, as shown by the MoCA score results.

In the adult brain, BDNF and its specific receptor are heavily expressed. It is involved in growth, differentiation, maturation, and survival of immature neurons, whereas in mature neurons, BDNF plays a key role in synaptic plasticity, augmentation of neurotransmission, and receptor regulation (22). The serum BDNF levels were reported to be significantly lower in patients with advanced dementia than in control subjects (23, 24). The majority of studies have reported reduced BDNF levels in subjects suffering from AD (25) and BDNF seems to be also involved in Parkinson's disease and Huntington's disease (4). Moreover, in healthy elderly subjects, higher BDNF serum levels were associated with better neuropsychological status (26, 27).

Concerning immediate and delayed verbal memory and visual memory, BDNF levels were found to be significantly negatively associated with the scores on these functions (28). Moreover, the BDNF serum level was positively correlated with performance on neuropsychological tests investigating executive functioning and attention (29) and it was recognized as a remarkable inhibitor of degeneration, apoptosis-mediated and neurotoxin-induced, of dopaminergic neurons. The BDNF dysfunction may contribute to, or be a consequence of, mental illnesses such as major depressive disorder (30). In the same way, human polymorphisms in the BDNF gene are related to a higher risk of bipolar disorder (4).

Although not statistically significant, probably because of the small number of subjects involved, serum BDNF levels measured after therapy were also higher in those patients who did not achieve viral eradication. This result shows that the positive effects of antiviral therapy go beyond the simple eradication of the infection, bringing systemic benefits to patients who use it.

It has been widely demonstrated that the eradication of HCV leads to the reduced progression of liver disease, reduced liver-associated and all-cause-mortality, and reduced extrahepatic manifestations, with a significant improvement in the quality of life (31, 32). Only a few studies have tried to match the serum BDNF levels and neurocognitive disorders in patients with HCV infection (33). Modabbernia et al. provided evidence of the association of BDNF with impairment of physical aspects of quality of life in patients with HCV (33) and Lotrich et al. showed that lower BDNF levels before IFN-α therapy were predictive of more serious depression symptoms during therapy with IFN-α (30).

Based on our data, we believe that dosing serum BDNF levels may represent a useful marker of cognitive dysfunction in patients with HCV infection and a useful index for assessing the post-therapy follow-up. Further studies are needed to assess the reliability of serum BDNF levels as a marker of neurocognitive status in HCV-infected patients and its variation after DAA therapy administration.

Copyright © 2020, Author(s). This is an open-access article distributed under the terms of the Creative Commons Attribution-NonCommercial 4.0 International License (http://creativecommons.org/licenses/by-nc/4.0/) which permits copy and redistribute the material just in noncommercial usages, provided the original work is properly cited.
download pdf 145.62 KB Get Permission (article level) Import into EndNote Import into BibTex
Number of Comments: 0