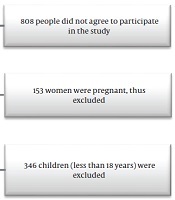 The Incidence and Risk Factors of Non-Alcoholic Fatty Liver Disease: A Cohort Study from Iran

Non-alcoholic fatty liver disease (NAFLD) is a condition with a global prevalence of 24%. A broad spectrum of liver complications has been attributed to this condition.

This study was conducted to determine the incidence of NAFLD and its potential risk factors in a seven-year follow-up study in Iran.

This is a prospective cohort population-based study conducted in the northern region of Iran. In phase I of the cohort study, 2,461 participants were selected, between 2009 and 2010, using the stratified randomization method based on the sex and age of individuals. Ultrasonographic examination was performed again after a seven-year follow-up between 2016 and 2017. The multiple binary regression analysis was applied to evaluate the association between the development of NAFLD and potential risk factors.

Non-alcoholic fatty liver disease (NAFLD) is characterized by the accumulation of fat in the cytoplasm of hepatocytes in individuals without a history of excessive alcohol consumption, drugs, genetic diseases, or other causes of steatosis (1, 2). Patients with NAFLD can experience a wide range of clinical manifestations from simple steatosis to liver cirrhosis or hepatocellular carcinoma (3). In addition to liver disease, NAFLD correlates with other non-communicable disorders. It has been reported that NAFLD is associated with type 2 diabetes, hyperlipidemia, and metabolic syndrome (3-5). The disease may also lead to an increase in the risk of developing cardiovascular diseases, chronic renal disorder, or even death (6). One study conducted in Iran showed a significant correlation of NAFLD with age, body mass index (BMI), aspartate transaminase (AST), alanine aminotransferase (ALT), triglyceride, cholesterol, low-density lipoprotein (LDL) and fasting blood sugar (FBS) (7). Several studies have indicated that physical activity, socioeconomic status, diabetes, and hypertension are strongly associated with the development of NAFLD (8).

Globally, there are longitudinal studies about the incidence of fatty liver disease and its association with other risk factors, particularly in developing countries. Thus, the estimation of the prevalence and particularly the incidence rate are of importance.

This population-based study was conducted in the northern part of Iran to estimate the incidence rate of NAFLD and related risk factors in a seven-year follow-up period.

Considering that the expected annual incidence of NAFLD is equal to 10% as well as a precision of 0.02% - 1%, as the main aim, and expected drop-out rate of 50%, it was estimated that a total of 1728 to 6912 subjects could be recruited to estimate a related proportion based on the below formula (the sample size formula for a single proportion) (16):

In this prospective, population-based cohort study, in phase I of the cohort study, 2,461 individuals participated who were without a history of NAFLD. A schematic view of the inclusions and exclusions criteria are displayed in Figures 1 and 2. The study procedures consisted of two phases; the phase I was performed in Amol: between 2009 and 2010, while the phase II was conducted between 2016 and 2017. Amol is a relatively populated city located in the mid-northern region of Iran. This city belongs to Mazandaran province and has 180 km distance from the capital of Iran, Tehran. Samples were obtained from district health centers related to primary health care settings in urban and rural areas. The primary data used to obtain an exact sampling frame are usually available in these settings. Based on these primary data, we stratified the sampling frame to 16 strata according to the sex and age of groups, including 10 - 19, 20 - 29, 30 - 39, 40 - 49, 50 - 59, 60 - 69, 70 - 79, and 80 - 89 years. The sample size in each stratum was calculated based on the size of individuals in the same stratum. The documented data of the primary healthcare settings were applied to obtain the sampling frame. Between the years 2009 and 2010, to begin phase II of the cohort study in 2016, we were annually in contact with the participants or their family members to provide the associated outcomes. We contacted households by means of telephone calls and cell phones. In the case of the unavailability of patients to respond to our calls, our team referred to where they lived in accordance with the district health centers where the sampling process was carried out. Next, the demographic, anthropometric, and clinical features of the former participants (documented in 2016) were recorded. Thus, former volunteers were actively invited to join in phase II of the cohort study. New cases of individuals with NAFLD were diagnosed by ultrasonographic examinations and a history of risk factors for each patient. Finally, 2,461 subjects who had not any history of NAFLD were included in the present study.

The demographic data, including the gender, age, marital status (single, married, and divorced/widowed), and residency status (urban and rural) were recorded upon the registration of participants in both phases of the study. A calibrated non-stretchable meter was utilized to measure the height of participants. The measurement was performed while participants were standing, and their heels and buttocks were in contact with a wall. Their weight was calculated by a calibrated scale with a precision of 100 g. The height and weight values of each subject were assessed after removing the excess cloths and shoes.

Approximately 10 mL of the whole blood was taken from each individual and placed in a serum separator tube (SST, tiger top tube). Samples were left until the clot appeared. All samples were centrifuged at 3000 rpm for 10 min. Thereafter, the serum was collected using the clean pipette technique and then kept at -80ºC. For the separation of plasma samples, the whole blood specimens were poured in EDTA-containing tubes and centrifuged at 2000 rpm at 4ºC for 20 min.

3.3. The Diagnosis of NAFLD

Ultrasonographic examinations were applied for the diagnosis of NAFLD in all participants between 2009 and 2010 and performed again between 2016 and 2017 as a follow-up procedure. This disease was defined as evidence of hepatic steatosis if participants had no history of excess consumption of alcohol, drug-related steatosis, and a history of hereditary steatogenic hepatic conditions. Ultrasonographic examinations were conducted by an expert radiologist was blinded to the study protocol and not directly involved in the study. The liver parenchyma was radiologically analyzed in different dimensions, including sagittal, longitudinal, lateral, and intercostal views using a 3 - 5 MHz transducer. The increased hepatic echogenicity, as well as the abnormal appearance of hepatic vessels and diaphragm in ultrasonographic images, was regarded as the required criteria to confirm the diagnosis of fatty liver.

The outcome measure was defined as the incidence of the disease in a seven-year period (as a percentage), assuming that NAFLD is a common disease. Thus, the incidence rate of NAFLD in this study was calculated according to the below formula:

[(No. of new cases of NAFLD in the population during a 7-year period) / (No. of individuals who were at risk of developing NAFLD (subjects without NAFLD at the beginning of study))] × 100

The simple and multiple logistic regression analyses were conducted in which the incidence rate of NAFLD (during a seven-year follow-up period) was considered a dependent variable. In multiple logistic regression analyses, age, residency, marital status, body mass index (BMI), homeostatic model assessment (HOMA-IR), triglyceride (TG), high-density lipoprotein (HDL), low-density lipoprotein (LDL), and the mean arterial blood pressure (MAP) were regarded as the potential predictors. The multi-collinearity test between systolic blood pressure (SBP) and diastolic blood pressure (DBP) indicated that these two factors are positively correlated; thus we considered the MAP factor, instead of SBP and DBP, into the logistic regression model. The logistic regression model was separately conducted in both genders. The statistical significance was defined as the P value of being less than 0.05. All of the obtained data were analyzed using the SPSS software version 21.

Table 1. The Mean Values of the Basic Characteristics of Individuals at Baseline (in the Phase I of the Cohort Study)a

Table 2. The Results of Simple and Multiple Binary Logistic Regression Analyses with Respect to the Incidence of NAFLD After a Seven-Year Follow-Up as the Outcome

bThe ratio of marital status to being single

As mentioned above, marital status had a significant correlation with the incidence of NAFLD in female patients without a history of NAFLD. It is worth mentioning that married women may have a higher age and pregnancy rates that can cause pregnancy-associated diabetes, leading to higher abdominal obesity. All factors mentioned earlier could be considered the risk factors of NAFLD. Although the age was not independently associated with NAFLD in women, higher age can influence the development of NAFLD as a result of other factors, including insulin resistance, abdominal obesity, physical inactivity, and other potential contributing risk factors. Furthermore, other potential mediators, in the correlation of marital status with NAFLD in women, can also play a role; however, these potential factors were not evaluated in this study. The lifestyle of female patients can vary since, upon the marriage, they mostly devote themselves to perform housekeeping activities. Notably, being “in shape” might be less priority to married women compared with single women according to Iranian culture. An imbalance between the intake of high-calorie foods and energy expenditure may also be involved in this regard (12, 23).

Overall, the present study showed that the annual rate of NAFLD is estimated to be approximately 4% in men and 4.3% in women. This estimation is statistically higher than those of some investigations performed in Western populations (11), and it may have some confounding factors to be considered. Our study was limited by some restrictions, as the time of NAFLD onset was not recorded, and thus we were not able to analyze the survival models, such as the Cox proportional hazard model; however, predicting the precise time of NAFLD onset would not be easily feasible in a population-based study. The annual evaluation of patients with NAFLD by ultrasonographic examinations would be valuable. The application of this technique for the diagnosis of NAFLD was another limitation of this study. This diagnostic method is not capable of distinguishing between the changes in adipocytes of the liver and fibrosis. NAFLD has a wide spectrum of clinical manifestations from simple steatosis to liver fibrosis. Although the liver biopsy is a gold-standard method for the diagnosis of NAFLD, this procedure is invasive and cannot be considered the best diagnostic tool in population-based studies. The evaluation of alcohol consumption as a self-report variable was another limitation of the study due to social desirability bias. However, utilizing an anonymous questionnaire would be helpful in overcoming this obstacle. The inability to consider other socioeconomic factors may be another limitation of this study, as it would not be possible to collect truthful information about some variables, especially in developing countries. Household income and educational status could provide valuable information.

All authors acknowledge the financial support of the Iran University of Medical Sciences, Tehran, Iran.

Copyright © 2020, Author(s). This is an open-access article distributed under the terms of the Creative Commons Attribution-NonCommercial 4.0 International License (http://creativecommons.org/licenses/by-nc/4.0/) which permits copy and redistribute the material just in noncommercial usages, provided the original work is properly cited.
download pdf 298.02 KB Get Permission (article level) Import into EndNote Import into BibTex
Number of Comments: 0