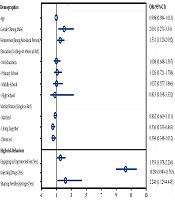 We aimed to describe the seroepidemiology of HCV infection in drug users at a Detoxification Center in Southeast China.

With approval from the Shantou Center for Disease Control, the archived data of drug users (n = 5,228) at the largest monitored-detoxification center in Shantou during 2011 - 2017 were analyzed for demographics, risk behaviors, and HCV serology.

This study reports the seroepidemiology of drug users in the monitored Detoxification Center in Southeast China. A relatively high HCV positivity rate, especially among PWID, their high-risk behaviors and low education, and lack of institutional interventions of HCV monitoring and transmission call for government-sponsored educational programs to raise drug users’ awareness of the risk of HCV infection and other co-infections and monitoring of the infectious status and treatment of HCV-infected drug users.

Hepatitis C, a blood-borne infection caused by the hepatitis C virus (HCV), poses a global healthcare burden, especially due to its consequences such as cirrhosis, hepatocellular carcinoma, liver failure, and death (1). People who inject drugs (PWID) are the main population with high HCV incidence and prevalence in most of the reporting countries (2-4). The regional prevalence of HCV infection in PWID varies widely, including 64.7% in Eastern Europe, 61.9% in Latin America, 57.1% in Australia, 55.2% in North America, 53.2% in Western Europe, and 38.6% in South Asia (3, 5).

Sharing needles/syringes or drug preparation and injection materials (such as cookers, cotton, water, ties, or alcohol swabs), duration of drug injection, using and injecting multiple types of drugs, unprotected sex, and male homosexual activity are considered the risk behaviors for HCV infection in PWID (6-9). Although these risk factors are variable depending on reporting countries, drug-injecting practices and sexual contact remain strongly associated with HCV infection (10).

Globally, there are around 13 million PWID, of which 67% have hepatitis C. Also, PWID account for more than half of the 2.2 million HCV/HIV (human immunodeficiency virus) co-infections worldwide (11). In China, there were about 2.4 million known drug users in 2018, with most of them residing in Guangdong Province in the southeast of China (12). Guangdong was reportedly one of the Chinese provinces with the highest HCV infection rate among PWID in 2008 (10) and drug users in 2011 - 2013 (13). The current status of HCV prevalence in Guangdong PWID is, however, unknown.

This study aimed to describe the serological prevalence of HCV among drug users during 2011 - 2017 in a Detoxification Center in Shantou City, Guangdong Province.

This study was approved by the Ethics Committees of Shantou University Medical College and the Shantou Center for Disease Control and Prevention (CDC).

The study population was the drug users in the largest monitored-Detoxification Center in Shantou City, one of the 87 national HCV monitoring sentinels with mandatory screening for HCV by serology in focus groups including PWID. Shantou is the prefectural city of Guangdong Province with a population of 5.6 million as of 2017 (14).

The HCV screening was done as an annual routine by the Shantou CDC. Two third-generation enzyme immunoassay (EIA) kits were used to test anti-HCV antibodies, one for screening (Kehua Biotech Co. Ltd, Shanghai, China) and the other for confirmation (Abbott HCV EIA 2.0 Abbott Laboratories, North Chicago, Illinois, USA). The samples positive in both tests were merely considered HCV-positive.

Self-reported data including demographics, drug usage and practices, and sexual practices were collected from all the participants by the Shantou CDC.

The data were analyzed by SPSS version 13 (SPSS, Chicago, IL). Categorical variables, such as gender, education, origin of residence, marital status, and HCV test results, were analyzed by the chi-square test. Continuous variables, such as age, were analyzed by the t-test (for normally distributed data) or Mann-Whitney U test (for non-normally distributed data). The normality of continuous variables was tested by the Kolmogorov-Smirnov test. A multiple logistic regression model (Enter method) was used to assess the effect of different variables on HCV positivity. All statistical tests were two-tailed and P value < 0.05 was considered statistically significant.

Table 1. Demographics of Drug Users and HCV Seroprevalence in the Detoxification Center, Shantou, China (2011 - 2017) a

cP < 0.01 by chi-square test for HCV-positive vs. HCV-negative, as diagnosed by two HCV-Ab tests (see methods for detail). This study reports for the first time the HCV seroprevalence and high-risk behaviors of drug users in the largest Detoxification Center in Shantou City, Guangdong Province, China.

Currently, PWID are the main target population for the prevention of HCV infection in many parts of the world. The HCV prevalence in PWID varies considerably across countries (3) or even within a country and over time. The HCV prevalence (67.2%) in Shantou PWID is slightly lower than that of Hong Kong PWID during 2013 - 2014 (76.4%) (16), and similar to the global prevalence (67%) (17); however, a very high prevalence up to 81.9% was reported during 2008 - 2011 in the southwest and central parts of China (7). One likely reason could be the special geographic factor, as southwest and central China is known as “the China Channel” for opium trafficking from the production bases in “the golden triangle” to other regions in China (9).

Some modes of HCV transmission among drug users are well recognized (18) as unsafe sex (13) and high-risk sexual practices such as homosexual activity (19). Sharing injecting equipment such as needles and syringes is also considered a significant risk factor for HCV infection in PWID (20). These also hold true for Shantou PWID.

Because of the shared modes of transmission, people at risk for HCV infection are also at risk for hepatitis B virus (HBV) or HIV infection. It is estimated that HCV-HBV co-infection affects an estimated 2.6 million PWID globally (17). Besides, HCV-positive PWID are at disproportionately high risk of HIV infection, as is evident from the fact that PWID account for more than half of the 2.2 million HCV/HIV co-infections worldwide (17, 21) and yet, 40% to 85% of persons infected with HCV are reportedly not aware of their HCV infection status (22). In China, 15% of PWID in Yunnan Province were co-infected with HCV/HIV during 2009 - 2011 (23). Therefore, the risk of HCV/HIV co-infection in Shantou PWID cannot be ignored and screening should be done.

Further, PWID not only are ignorant of their risk of HCV infection or necessity for testing (20) but also have no understanding of HCV test results and health implications (24). The high-risk behaviors of PWID in this study were most likely due to their low health literacy because people with less than high school education are known to have low health literacy (25) and the majority (> 89%) of the drug users or HCV-positive drug users in this study had low education.

It is concerning that our study setting only did HCV screening without offering interventions, such as risk-reduction education, HCV treatment, or HCV-RNA testing for monitoring the infectious period. Without intervention measures, there remain the risks of HCV infection in drug users who are still HCV-negative and HCV transmission among family members of HCV-positive drug users.

Although there are three Detoxification centers in Shantou, our study setting is the largest and the only monitored center for HCV infection. Therefore, the results presented herein represent only reported drug users in the monitored Center in Shantou. Besides, we could not report HCV incidence because HCV antibody tests used in this study could not distinguish acute from chronic HCV infection. The HCV/HIV co-infection rate was not known as relevant data were not available. We also cannot assure the credibility of self-reported personal behaviors about drugs and sexual activities.

This study provides HCV seroepidemiology and high-risk behaviors among drug users in the monitored Detoxification Center in Shantou. The study findings should lay the groundwork for future interventions such as government-sponsored educational programs to raise drug users’ awareness of HCV and other co-infections, and monitoring of the infection status and treatment of HCV-infected drug users.

Copyright © 2020, Author(s). This is an open-access article distributed under the terms of the Creative Commons Attribution-NonCommercial 4.0 International License (http://creativecommons.org/licenses/by-nc/4.0/) which permits copy and redistribute the material just in noncommercial usages, provided the original work is properly cited.
download pdf 734.65 KB Get Permission (article level) Import into EndNote Import into BibTex
Number of Comments: 0