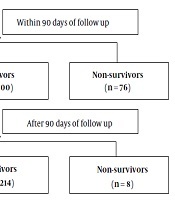 The purpose of the present study was to investigate the prognostic value of serum urea for 90 days and six months’ mortality in hospitalized patients with Decompensated Cirrhosis (DeCi).

We performed a single-center, observational prospective study with data from 456 enrolled patients with DeCi. The biochemical examination and patient demographics were obtained upon admission after 24 h. All patients were observed until death, loss to follow-up, or for six months. Univariate and multivariate analyses were used to determine whether serum urea was independently associated with the prognosis of DeCi patients. The AUROC was implemented to test the predictive accuracy compared to existing scores.

Serum urea was significantly higher in non-surviving patients than in surviving patients. Multivariate analysis demonstrated that the urea level was an independent predictor of 90 days’ (odds ratio: 1.084, P = 0.001) and six months’ (odds ratio: 1.070, P = 0.009) mortality. The ROC curves were established to evaluate the relative efficiencies of the urea level for predicting 90 days’ (AUROC: 0.728, P < 0.0001) and six months’ (AUROC: 0.715, P < 0.0001) mortality. The performance of the new scores, in which lg urea was added to the MELD score and the Child-Pugh score, was better than the MELD score and Child-Pugh score alone, respectively (P < 0.001).

Serum urea levels at admission may be useful for predicting long-term mortality in DeCi patients and the predictive value of MELD score and Child-Pugh score improved by adding lg urea.

Liver Cirrhosis (LC) is an important cause of mortality worldwide, especially in China. The primary cause of cirrhosis is HBV infection. Approximately 3% of patients with compensated cirrhosis progress to Decompensated Cirrhosis (DeCi) each year (1). Decompensated cirrhosis is characterized by several complications, including ascites, hepatorenal syndrome, and upper gastrointestinal bleeding, leading to poor prognosis and a five-year survival rate of only 14% ~ 35% without any treatment (2, 3). Decompensated cirrhosis carries a poor prognosis, as the median survival time is about two years, and it imposes a heavy burden on health care costs, mainly due to the need for repeated hospital admissions (3, 4). The mortality rates of patients with DeCi treated at Intensive Care Units (ICUs) or hospitals range between 20% and 60% (5-8). At present, different scoring systems are used to assess the prognosis of patients to improve clinical management and reduce the high rate of mortality in these patients (8, 9). Therefore, the discovery of a marker with high practicability, especially in patients with DeCi at the ICU or hospital, is of crucial importance to guide therapeutic measures.

Serum urea is the end product of proteins. It is consistent with the level of protein metabolism and has been extensively reported in kidney disease, diabetes, pregnancy-induced hypertension, and fever following Transcatheter Arterial Embolization (TAE) (10-13). In a previous prospective study, Lei et al. suggested that serum urea could predict short-term outcomes of patients with hepatitis B virus-associated Acute-on-chronic Liver Failure (ACLF) (14). Mjasnikova et al. suggested that serum urea was associated with the Model for End-stage Liver Disease (MELD) score in HCV-induced liver cirrhosis, as well as with esophageal vein bleeding (15). However, there are currently a few accurate markers to predict long-term mortality after hospital admission of patients with DeCi.

In the present study, we investigated serum urea as a predictor of 90 days and six months’ mortality in a cohort of DeCi patients.

This single-center, observational prospective cohort study was conducted on patients admitted to the First Affiliated Hospital of Nanchang University between January 2013 and December 2017 who met the criteria of DeCi during their hospitalization. The ethics committee of the hospital reviewed and approved this study. All study participants or their legal guardians provided written informed consent before their enrollment in the study. All of the patients were given comprehensive supportive treatment after admission to the hospital and were followed up until death or for six months, whichever was earlier. Patients aged < 18 years, patients who were pregnant, and patients with cerebrovascular disease, cardiovascular disease, hematologic disorders, or renal failure were excluded from the study. The data from the medical records of the selected patients were input in the form of case reports and verified with the clinical data system in our hospital. All patients were treated following accepted recommendations and guidelines after admission to the hospital and they were followed up until death, loss to follow-up, or for six months (16, 17).

In this study, DeCi was diagnosed by clinical, biochemical (e.g., low platelet count and detailed liver profile), and radiological (e.g., splenomegaly, coarse, nodular liver, and features of portal hypertension) performance, the presence of ascites, Hepatic Encephalopathy (HE), and/or endoscopic detection of esophageal or gastric varices or Portal Hypertensive Gastropathy (PHG), and liver biopsy results. Hepatorenal Syndrome (HRS) and ascites were diagnosed using the criteria proposed by the International Ascites Club and American Association for the Study of Liver Disease, respectively (18, 19). Moreover, ACLF was defined as patients with Acute Decompensation (AD) along with organ failure as per the Chronic Liver Failure-sequential Organ Failure Assessment scores.

The data are expressed according to the properties of variables. Continuous variables are presented as the median and interquartile range. Categorical variables are presented as frequency. Categorical variables were compared using the χ2 test and continuous variables were compared using the Mann-Whitney U test. The univariate and multivariate logistic regression analyses were employed to demonstrate the independent predictors of the mortality rate of patients with DeCi. All variables that were found to be associated with mortality (P < 0.10) in the univariate logistic regression analysis were included as candidate variables in a forward conditional stepwise logistic regression analysis to identify independent predictors of the prognosis of DeCi patients. The diagnostic accuracy of the prognostic variables was examined by Receiver Operating Characteristic (ROC) analysis using MedCalc version 15.2.1 statistical software (MedCalc, Ostend, Belgium). Statistical analyses were performed using SPSS version 16.0 software (SPSS Inc., Chicago, IL). All statistical tests were two-sided and a value of P < 0.05 was considered statistically significant. Figure 1. Study flow diagram showing each stage of inclusion, exclusion, and loss to follow-up of patients in our study.
Table 1. Characteristics of Patients in the DeCi Cohorta

aValues are expressed as No. (%) or median (interquartile range).

4.2. Association Between Mortality and Clinical/Laboratory Characteristics

Table 2. Association Between Clinical/Laboratory Characteristics and Mortality in DeCi Patientsa

aThe data are expressed as the median (interquartile range).

4.3. Risk Factors Related to Prognosis of Patients with DeCi

Table 3. Univariate and Multivariate Analyses of Risk Factors Associated with Mortality at 90 Days

4.4. Predictive Value of Serum Urea for Prognosis of DeCi Patients We conducted a single-center, large sample, observational prospective analysis to evaluate simple laboratory parameters as predictors of mortality of DeCi patients. Consistent with a previous study on patients with liver cirrhosis, approximately 20% of the patients died within six months in the present study (31). The study was conducted for establishing the role of serum urea as a prognostic indicator for DeCi patients. We found that serum urea was significantly higher in non-surviving patients than in surviving patients (Table 2) and served an independent risk factor for long-term mortality (Tables 3 and 4). More importantly, our results indicated that serum urea could predict long-term mortality in DeCi patients (Table 5 and Figure 1) and the efficiency of the MELD score and the Child-Pugh score improved by adding lg urea (Figure 2). Serum urea is a biochemical test item that is often simultaneously detected with albumin, bilirubin, and transaminase indicators in clinical practice. A combination of lg urea with the MELD score and Child-Pugh score could increase the predictive efficiency without increasing testing costs.

The underlying mechanisms of how serum urea can predict the prognosis of patients with DeCi are not well established. Previous reports indicated that gastrointestinal hemorrhage would produce urea through liver metabolism (32). In Mjasnikova et al.’s study, serum urea was correlated with the MELD score in HCV-induced liver cirrhosis, as well as with esophageal vein bleeding (15). The energy consumption of hepatocellular carcinoma increases the decomposition of proteins, which, in turn, increases serum urea. In our study, hepatocellular carcinoma was an independent risk factor for mortality of DeCi patients. The correlation between liver cancer, serum urea, and patient prognosis remains to be further studied. Hepatorenal syndrome, which is a common complication of patients with DeCi, can also increase serum urea. In Gerbes et al.’s study, serum urea could be a valuable tool in patients with cirrhosis for early diagnosis of moderately impaired renal function although the diagnostic efficiency of serum urea was lower than that of serum cystatin C (33). The results of Lei et al.’s study indicated that serum urea was significantly associated with the short-term outcomes of hepatitis B virus-associated acute-on-chronic liver failure (14). Hence, we assume that the level of urea is a comprehensive marker of gastrointestinal hemorrhage, protein metabolism, and kidney function, which strongly impacts the prognosis of DeCi patients.

There were some limitations to the study. First, the present study was a single-center investigation in China and some patients were lost to follow-up, which carried bias in the participant selection and had some residual confounding factors due to unmeasured/unknown confounders. These findings need to be confirmed in large multicenter studies. Second, the serum urea level is affected by many factors, such as blood volume, drinking, infection, wounds, and steroid corticosteroid therapy. Lastly, we could not evaluate the predictive role of dynamic changes in serum urea, as the long-term changes in serum urea were not routinely measured in clinical practice.

In conclusion, many factors may be useful to predict the mortality of hospitalized DeCi patients, including MELD score and Child-Pugh score. Our results indicated that serum urea strongly and independently predicted long-term outcomes in DeCi patients. In terms of prognostic value, serum urea levels demonstrated a similar discriminatory power as the MELD score and Child-Pugh score and the predictive efficiency of the existing scores elevated by adding lg urea. From a clinical perspective, it is conducive to rapid diagnosis and timely treatment to reduce mortality from a clinical perspective.

We would like to thank the National Natural Science Foundation of China and the “Gan-Po Talent 555” Project of Jiangxi Province for financial support.