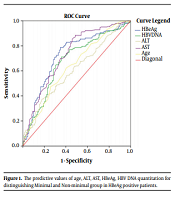 The HBeAg-positive patients with treatment-naïve hospitalized at Ditan hospital from January 2008 to January 2017 are investigated. Patients were separated into two groups of minimal and non-minimal (mild and moderate) histological inflammation group by liver biopsy specimens. Data were analyzed using the SPSS package.

Hepatitis B virus (HBV) is an important public health challenge worldwide. The prevalence of HBsAg (hepatitis B surface antigen) in the general population of China is 5 - 6%. HBV carries considerable morbidity and mortality in China so that there were about 70 million cases of chronic HBV infection, and the annual death of HBV-related cirrhosis and liver cancer reached about 600,000 (1).

Chronic hepatitis B is an infectious disease whose pathogenesis is closely related to immunity. After chronic HBV infection, the fight between human immunity and the HBV started. Initially, the human immune system was not able to identify the HBV because of immune tolerance. The HBV replicates in large quantities in the liver cells of infected individuals. However, the liver pathology remains in a normal state or with minimal inflammation (2). As age increased, the human immune system gradually identified the HBV, which resulted in increased inflammation of liver cells, which in turn caused elevated ALT. In patients with chronic HBV, inflammated liver indicates the necessity of imitating the antiviral therapy. The liver pathology is the gold standard for determining liver inflammation grade. Can noninvasive biomarkers such as HBsAg be considered as predictors of liver inflammation? Do chronic HBV-infected patients with ALT ≤ 1 ULN need treatment?

We followed the principle of the Declaration of Helsinki. Also, the project is approved by the responsible committee of Beijing Ditan hospital and informed written consent was obtained from all patients.

In Ditan Hospital, the HBeAg-positive patients who were treatment-naïve and underwent liver biopsy were retrospectively enrolled from January 2008 to January 2017. In the present study, all patients were infected by vertical transmission. Entry standards were as follows: patients infected with chronic hepatitis B for ≥ six months, HBsAg positive, received liver biopsy without antiviral treatment. Meanwhile, those patients had persistently normal ALT levels ≤ 1 ULN (upper limit normal, 40 U/L) and HBV DNA ≥ 103 IU/mL before the biopsy. Exclusion criteria: patients with combined other viral hepatitis i.e., HAV, HCV, HDV, HEV, or HIV, with hepatic cirrhosis, liver cancer, drug-induced liver injury, metabolic liver disease, alcoholic liver diseases, or autoimmune liver disease. It worth noting that those patients who were pregnant were not included. The following indicators were checked for all subjects: blood routine, liver function, and blood clotting function, the quantitation of HBV DNA, HBsAg, and HBeAg. All stained liver biopsy specimens were scored by three pathologists using the Knodell scoring system. The enrolled patients were divided into four groups on the basis of the pathological Knodell scores (0 - 18): minimal, mild, moderate, severe liver inflammation, respectively, with the score of 0 - 3, 4 - 8, 9 - 12, 13 - 18 (3-5). All patients were also divided into two groups of Minimal and Non-minimal (mild, moderate, and severe) according to clinical therapy needs.

The pathological slides of the liver biopsy were observed by Nikon Eclipse 80i Microscope (Nikon, Inc, Japan) and independently read by pathological experts in 367 HBeAg positive patients with chronic HBV-infection. The final Knodell scores were considered as average scores reported by three pathologists.

Data of serum HBV DNA, HBsAg, and HBeAg quantitation were logarithmically transformed before statistical analysis. The chi-square test or two-sided Fisher's exact test were used for the categorical data. The Mann-Whitney or Kruskal-Wallis test and the Student t-test or one-way analysis of variance were, respectively, used for nonparametric and parametric quantitative data. The independence of influential factors of liver inflammation was analyzed by stepwise Logistic regression model. Statistical significance was defined as P-value < 0.05. ROC (receiver operating characteristic) curve and AUC (area under ROC) were used to assess capabilities of serum parameters in differentiating Non-minimal from Minimal histological inflammation in HBeAg-positive patients. SPSS version 11.0 was used to analyze the data (SPSS Inc., Chicago, IL).

In this study, 367 subjects were included. The liver histopathological examinations revealed that 68.66% (252/367) of patients had minimal liver inflammation but didn't need antiviral therapy, while 31.34% (115/367) of patients had non-minimal (mild and moderate) liver histological inflammation and needed antiviral therapy. The gender, age, Knodell scores, serum ALT, AST, HBsAg, HBeAg, and HBV DNA quantitation of the two groups in HBeAg positive patients are provided in Table 1.

aData are shown as n or mean + Standard deviation. 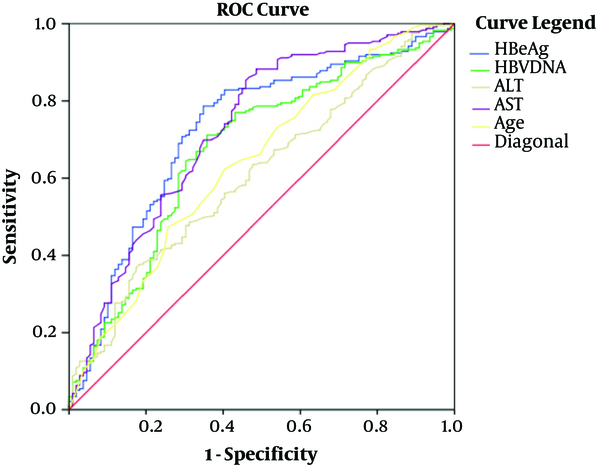 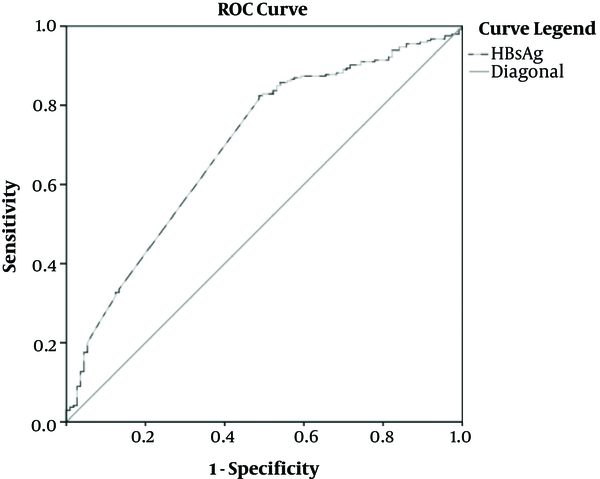 3.4. Multivariate Regression Analysis on the Independence of Factors that Contribute to Liver Inflammation Grades

In China, most of the chronic HBV infections are caused by mother-to-child transmission. The history of chronic HBV infection contains four periods of immune tolerant, immune clearance, immune control, and HBeAg negative chronic hepatitis. In all clinical guidelines for the treatment of chronic HBV infection, the former can be observed without treatment. Antiviral therapy is necessary for preventing the progression from chronic hepatitis B. Therefore, in HBeAg-positive patients, determining whether there is significant inflammation in the liver or not is of crucial importance. The existence of liver inflammation is often manifested by the changes in ALT level and HBV virological indicators. Meanwhile, it should be noted that sole consideration of ALT level may be misleading, as some chronic HBV infected patients may have normal levels of ALT despite significant inflammatory necrosis of liver cells. Therefore, clinically it is difficult to obtain liver histopathology for each chronic HBV infected patients, we hope to evaluate the liver inflammation of HBeAg-positive patients according to a series of noninvasive indicators, such as ALT, virological indicators, to identify patients in need of treatment.

In the first phase of chronic HBV infection, namely the immune tolerance phase, the virus replicates in large quantities. The serum HBV DNA, HBsAg, and HBeAg were up to tens of thousands or a thousand, respectively, and the inflammation of the liver was minimal. The immune clearance phase occurs with age increased to about 30 years, and the quantification of serum HBV DNA, HBsAg, and HBeAg decreases accordingly. In the HBV life cycle, HBV DNA was the direct indicator of HBV replication, while HBsAg and HBeAg were the indirect HBV replication indicators. HBsAg and HBeAg were roughly parallel to HBV DNA quantities in the absence of drug and virus mutations (12-15). It was recognized that HBsAg can predict CHB progression and can be used to monitor antiviral efficacy in chronic HBV infected patients (16-19). In our results, there were significant differences between the Minimal grade and Non-minimal grades (mild, moderate) group in age, ALT, AST, serum HBsAg, HBeAg, and HBV DNA quantitation by analysis of factors associated with liver inflammation. The minimal grade group had younger age and higher serum HBsAg, HBeAg, and HBV DNA quantitation than the Non-minimal group. Our relevance analysis confirmed that AST was a stronger factor (r = 0.390, P < 0.001), which was positively correlated with liver inflammation compared with ALT. In our previous study, using Logistic regression, it was proved that HBsAg and HBeAg quantitation were negatively associated with liver inflammation (20). In this study, we also found that HBeAg was the strongest factor (r = -0.419, P < 0.001), which was negatively correlated with liver inflammation, compared with serum HBsAg and HBV DNA quantitation. Many reports agreed that HBeAg is a better predictor of liver inflammation (21, 22).

The diagnosis of liver inflammation in patients with chronic HBV infection was often based on deciding whether antiviral treatment is needed. The key of this study was to identify the clues to predict the Non-minimal histological inflammation according to the ALT, virological indexes, and other noninvasive serum indicators in HBeAg-positive patients. The significance of this study was to help physicians to identify patients with normal ALT levels who required antiviral therapy in chronic HBV infection.

In short, HBeAg and AST were better noninvasive markers for predicting liver histological inflammation in HBeAg positive untreated patients by cut off values of 2.85 Log10S/CO and 28 U/L, respectively. Of course, we can establish a model of liver inflammation for chronic HBV infected patients as other researchers, but we admit that a single indicator is simpler and much more convenient in the clinical application. (27, 28)

The current study had three main limitations. First, it was a retrospective study. Second, if the sample size was enlarged, the ALT analysis could be divided by subgroups of sex. Third, in this study, HBV genotype was not detected in many patients. The association between the effect of genotype and liver inflammation was unknown, though previous epidemiological studies showed that the HBV genotypes in China are mainly genotypes B and C.