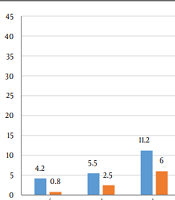 Congenital hypothyroidism (CH), as one of the most common endocrine disorders, is a preventable cause of mental retardation.

This study aimed to identify familial-related risk factors for CH in Iranian newborns.

A population-based case-control study was performed on the National Registry System of patients with CH in Iran. In this study, 906 controls and 454 cases were studied for one year. Familial related factors were investigated using logistic regression models. Population attributable fraction (PAF) was also calculated for each significant risk factor.

This study revealed that familial-related risk factors and consanguine marriages play an essential role in the high incidence of CH in Iran. About 15% of CH in Iran could be attributed to intra-family marriage alone.

Congenital hypothyroidism (CH) as a partial or complete loss of function of the thyroid gland affects neonates from birth (1). In this disease, the function of iodine-containing hormones that have an important role in metabolism, regulating growth, and brain development is disrupted due to inadequate thyroid hormone production that can be resulted from an inborn error of thyroid metabolism, defect in the gland, and iodine deficiency (2, 3). The clinical manifestations of CH are often subtle and, in more cases, not present at birth, likely because of the transplacental passage of maternal thyroid hormones. Increased sleep and decreased activity, feeding difficulty, constipation, and prolonged jaundice are common symptoms of children with CH (4, 5). According to new evidence, CH can be a risk factor for central hearing process disorders (6). This endocrine disorder can be detected on newborn screening, and infants who are identified in the first month have the best prognosis for optimal mental development (7).

Newborn screening programs for CH, which are primarily implemented in developed countries, provide the opportunity to investigate the pathogenesis and etiology of CH (8). Prior to the newborn screening program, the diagnosis of CH was based on clinical signs and symptoms, and the incidence was 1:7,000 to 1:10,000 (9). According to the current evidence, the recall rates of neonates, vary from 0.01% to 13.3% in different countries (10). Based on the reports obtained from data of national newborn screening programs in many regions, especially in the developed countries, CH occurs in approximately 1:2000 to 1:4000 newborns in many areas of the world, whereas CH incidence in Iran is higher. In Iran, where CH incidence is 1:650 live births, the national neonatal screening program for CH was established in 2004 and progressively developed all over the country (11, 12). All the Iranian public health centers that participate in the national screening program are responsible for newborn screening, treatment, and follow-up of children with CH. The success of CH treatment in Iran has been reported in a previous study (13).

The incidence of CH in Iran is much higher than in many other countries and the global average (14). Different familial and environmental factors can influence this high incidence. In fact, CH is a multifactorial disease, so that many environmental, familial, and autoimmune factors play a role in its pathogenesis (15, 16). Previous studies about the role of autoimmune factors in the Iranian population revealed no significant role in the pathogenesis of CH (17). Undeniably, identifying CH risk factors is crucial to improving the surveillance system of CH in the country and can help policymakers to plan and conduct pertinent intervention programs to control the high occurrence of this congenital disorder in the country. Regarding the environmental factors, the role of iodine deficiency or excess iodine intake was investigated. Iodine deficiency had no significant role in this regard (15).

The main aim of this population-based case-control study was to clarify the role of gestational diabetes and familial-related risk factors in the occurrence of CH in Iran.

The present research was a population-based case-control study conducted in Iran in 2018. The population included Iranian newborns (under 28 days) that were screened by the national newborn screening program. Study participants included 454 cases and 906 age-, sex, and socio-economic-matched controls who were enrolled from 18 medical universities located in 12 of the 31 provinces in Iran that observed a high incidence of CH. Approximately two age-matched (± 1 month) and socio-economic-matched (with same geographical location) controls were recruited per case based on specific criteria. The first control per case was sex-matched, and the second control per case was not sex-matched. The study enrolment started in June-2018 and was carried out for eight months. It is noteworthy that only newly diagnosed children with CH screened by the public health centers were included in our study. The screening test for CH in the Iran national newborn screening program is performed on dried blood spots on filter paper (S&S 903), and thyroid-stimulating hormone (TSH) is measured primarily as the screening test. The positive results in the first screening test were subsequently confirmed by serum TSH and T4/ Free T4. The controls were infants born in the same maternity clinic where a new CH case was born. They were recruited a month before or after the CH diagnosis was confirmed. As mentioned earlier, the socioeconomic factor is another significant factor by which we matched cases and controls so that cases and controls in this study were residents of the same region where the screening centers were located.

A structured checklist was administrated to gather the demographic and clinical data in the same way in cases and controls. All mothers of participants were tested for thyroid function through measurement of TSH and T4 hormones.

Other variables, including parents’ job, smoking status, newborn sex, gestational age at birth (term/pre-term), birth delivery type (vaginal/cesarean section), and familial-related factors such as congenital anomalies, history of mental retardation in the family, intra-family marriage, gestational diabetes/diabetes mellitus in mother, and having a hypothyroid child in the family, were gathered from hospital records and interviews with the children's' parents. To collect the latter data, the parents were interviewed by trained interviewers and provided their written informed consent prior to participation in the study. The design and protocol of conducting this study were evaluated and confirmed by the ethics committee of the Kurdistan University of Medical Sciences (ID: IR.MUK.REC.1396.153).

Data were analyzed by STATA software (version 13) using descriptive and analytical techniques. Univariate associations were explored using the Mann-Whitney U test, Pearson’s Chi-square test, and frequency table. To control the potential confounders, the possible association between familial profiles and CH were investigated using multiple logistic regression. Finally, the population attributable fraction (PAF) was calculated using Miettinen’s equation for each significant risk factor. All the statistical tests were two-sided, and a P-value < 0.05 was used to determine statistical significance.

Over the course of the study, a total of 1360 infants, including 454 hypothyroid (cases) and 906 healthy (control) children, were included in the research and analyses. Two-hundred and forty (52.9%) girls and 446 (49.2%) of the studied children were boys in the case and control groups, respectively. The participants were selected from 18 medical universities in 12 provinces of Iran (Table 1).

Table 1. Study Participants According to the Province and University of Medical Science Sampling

The distribution of various studied factors, demographic characteristics, and familial-related factors are summarized in Table 2. As observed in Table 2, the association between demographic variables and CH was not significant in the univariate analysis, while the relationship between CH occurrence and all the investigated familial-related variables was statistically significant (P < 0.05).

Table 2. Demographic Characteristics and Familial-Related Factors of Study Participants a

b Mann-Whitney U test.

Table 3. The Association of Gestational Diabetes, Some Familial-Related Factors and CH by Multiple Logistic Regression Modeling a

Since PAF is one of the most important parameters for assessing the effects of risk factors and evaluating the potential outcome of preventive strategies at the community level, the value of PAF was calculated for each significant variable based on the prevalence of each risk factor in the patient group. The prevalence of familial-related risk factors, according to the studied groups, is shown in Figure 1. Among all the evaluated risk factors, the prevalence of intra-family marriage is higher, 41.9%, and 33.2% in the case and control groups, respectively. The intra-family marriage risk factor had the highest PAF (14.15%) among all the seven investigated familial factors. The PAF values for other risk factors are provided in Table 4. 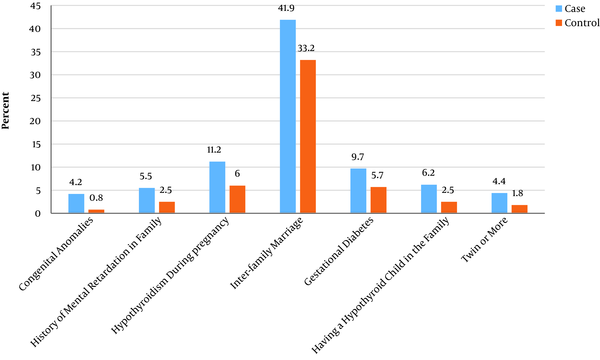 Prevalence of gestational diabetes and familial-related risk factors according to the studied groups.

Table 4. The Value of Population Attributable Fraction for Each Studied Variable

The results obtained from the present study, which is the first community-based case-control approach with adequate sample size, showed that some familial-related factors such as congenital anomalies, history of mental retardation in the family, mother’s hypothyroidism during pregnancy, intra-family marriage, gestational diabetes, having a hypothyroid child in the family, and twins or more, are considered significant risk factors for the high incidence of CH in Iran.

The other risk factor for CH in this study was a twin or multiple pregnancies, so that the chance of CH occurrence in twin or multiple pregnancies was 2.61 times higher than other infants. This finding is consistent with other studies conducted in the southwest Khuzestan province of Iran (21) and is supported by several studies in other countries (22-24). The results also indicated that gestational diabetes is considered a risk factor for CH. Although in a study conducted by Medda in the Italian population, diabetes was introduced as a risk factor for CH (18), we did not find further studies to support this finding in the literature. Hence, we suggest conducting further studies regarding possible relationships between gestational diabetes and CH.

We found that 36.19% of CH in Iran could be attributed to familial factors such as congenital anomalies, history of mental retardation in the family, the mother's hypothyroidism during pregnancy, intra-family marriage, gestational diabetes, and having a CH child in the family. Among these risk factors, the role of intra-family marriage with PAF = 14.9% is remarkable. In general, our findings actively addressed the role of familial factors as dominant etiologic factors in CH; albeit, it could not entirely ignore the possible role of autoimmune and environmental factors in the development and function of the thyroid gland and CH.

To the best of our knowledge, this is the first etiological research conducted with an incidence population-based case-control approach with the aim of identifying the most relevant familial-related risk factors for CH in Iran and other countries of the Middle East region. Another advantage of this study is that it assessed the hypothyroidism of mothers during pregnancy and its subsequent role in CH. Additionally, in this research, for the first time, we calculated the PAF for seven familial-related risk factors. As a limitation for our study, we did not have the data to evaluate other important risk factors of CH e.g., maternal iodine status by urinary iodine measurement and iodine supplementation with iodofolic that have been evaluated in previous studies (25).

This study provides evidence regarding the role of familial-related factors in CH. According to the obtained data, we can conclude that gestational diabetes and some familial-related factors such as congenital anomalies, parental consanguinity marriage, history of mental retardation in the family, mother’s hypothyroidism during pregnancy, having a hypothyroid child in the family, twin or multiple pregnancies, play an important role in the occurrence to CH in Iran. Although many risk factors are hardly modifiable, the calculation of PAF for each of the risk factors in this research can help health policymakers conduct pertinent intervention programs and improve CH surveillance.

The authors thank all surveillance staff at medical universities who helped us in recruiting the study subjects and collecting the required data.

Copyright © 2021, International Journal of Endocrinology and Metabolism. This is an open-access article distributed under the terms of the Creative Commons Attribution-NonCommercial 4.0 International License (http://creativecommons.org/licenses/by-nc/4.0/) which permits copy and redistribute the material just in noncommercial usages, provided the original work is properly cited.
download pdf 137.00 KB Peer Review Comments ( 287.86 KB) Get Permission (article level) Import into EndNote Import into BibTex
Number of Comments: 0