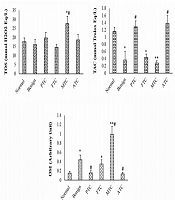 The TAC level was significantly lower in MTC and FTC subtypes than in controls. The TOS level was considerably higher in the MTC group than in the control and benign nodule groups. The TOS level was not changed in other groups. The OSI was considerably higher in MTC and FTC subtypes. The TAC and OSI in benign nodules were significantly lower and higher than those of controls, respectively. The OSI was higher in female patients than in males.

The OSI can not be considered a diagnostic biomarker for benign nodules and MTC. The diverse oxidative stress status between genders may be related to the elevated cancer incidence in females.

Oxidative stress is a kind of imbalance between reactive oxygen and nitrogen species, which results in the antioxidant defense. Free radicals can disturb important biomolecules such as DNA, lipids, and proteins (5). The redox imbalance can induce chronic diseases and cancer by affecting the oxygen species in molecular pathways (6). Although some oxidants contribute to mutation and growth, excessive oxidative stress can slow proliferation and damage cancerous cells (7, 8).

The oxidative status depends on endogenous enzymatic factors and exogenous factors such as diet, medication, and lifestyle (9-11). Thyroid hormones play important roles in regulating oxidative metabolism via adjusting the synthesis and degradation of enzymatic antioxidants such as catalase and superoxide dismutase and non-enzymatic antioxidants, including vitamin C and E (12). The oxidative stress is commonly accrued in thyroid tissue during utilizing H2O2 for thyroxin synthesis (13). However, only a few epidemiological studies have investigated the oxidative stress status in thyroid cancer (14).

Evaluating the levels of total oxidant status (TOS) and total antioxidant capacity (TAC) is an improved way compared to assessing oxidants and antioxidants separately, which is expensive and time-consuming.

Therefore, in the present work, we evaluated TOS, TAC, and oxidative stress index (OIS) in thyroid tissues of patients with thyroid cancer, benign thyroid nodules, and healthy control individuals in an Iranian population.

The current work was carried out in an Iranian population of Erfan Grand Hospital (Tehran). From 2017 to 2019, 138 selected individuals (98 females and 40 males) aged 27 - 74 years participated in the current work. The thyroid nodules of patients were detected by clinical examination. Fine needle aspiration (FNA) was performed for all individuals. Thyroidectomy was done for patients with malignant or repetitive indeterminate nodules. Among the selected participants, 108 had thyroid nodules, including 30 PTC, 30 FTC, 6 ATC, 12 MTC, and 30 benign nodules (Table 1). In addition, 30 individuals were selected to form a healthy control group. The Institute Ethics Committee (grant number: ajums.REC.1393.151) approved this work, and informed consent was obtained for all biopsy samples.

Total Antioxidant Capacity (TAC) was measured calorimetrically by the TAC kit (ZellBio GmbH, Germany). This assay is based on the reduction of Fe+3 to Fe+2, which can combine with phenanthrene to form a colored compound. The TAC was presented as mmol TROLOX Eq/L.

After overnight fasting, blood samples were collected. Approximately 5 ml of blood was collected for thyroid hormones analysis. After incubating the samples at room temperature for 10 min, they were centrifuged at 3,000 rpm for eight minutes, and the obtained sera were maintained at -80°C. The serum levels of thyroxine (T4), triiodothyronine (T3), and thyrotropic-stimulating hormone (TSH) were determined using available commercial kits (DiaSorin, Italy).

All statistical analyses were performed using SPSS 21.0 software. The normal distribution of data and homogeneity of variances were checked using the Shapiro-Wilk test and Levene’s test, respectively. A one-way analysis of variance (ANOVA), followed by Kruskal-Wallis post hoc pairwise comparisons, was used to analyze the data. All data were presented as mean ± standard deviation (SD). A P-value < 0.05 was considered significant. 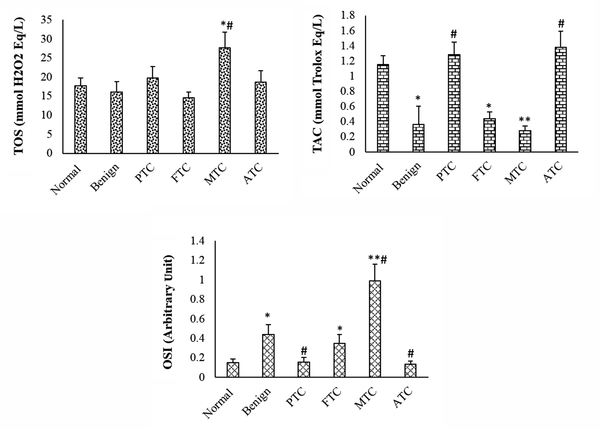 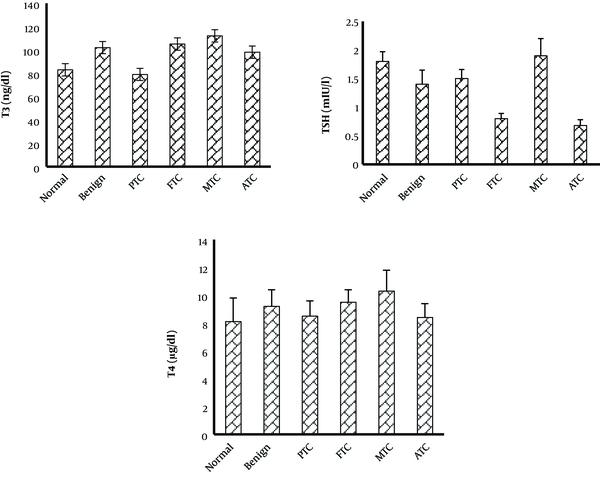 In humans, the complex antioxidant system can counteract free radicals and reactive oxygen species. This system includes different antioxidant substances such as enzymatic and non-enzymatic antioxidants, which may be known or unknown (16). Therefore, it is essential to determine the total oxidant and antioxidant levels to evaluate the oxidative stress status. Previous studies have examined the role of various individuals’ oxidative or anti-oxidative molecules in thyroid cancer.

Our results showed that oxidative stress status in patients with thyroid cancer is different from that of individuals with benign nodules and healthy individuals. Accordingly, TAC was lower in thyroid cancer patients, whereas OSI was higher in these patients. Akinci et al. compared the antioxidant enzyme activities between 43 patients with thyroid cancer and 43 control individuals. They reported that the superoxide dismutase level did not alter in thyroid cancer patients. However, malondialdehyde and antioxidant glutathione peroxidase changed with thyroid cancer (13). Among the cancer subtypes in this study, FTC and MTC groups showed a lower TAC level than other cancer subtypes. In mice with aggressive FTC, the upregulation of superoxide dismutase (SOD) reduced FTC proliferation, whereas SOD deficiency enhanced tumor growth (17). Hence, decreasing TAC may involve in the pathogenesis of FTC. In a study by Miri and Mohammadi (18), TAC and catalase levels were decreased in individuals with MTC. They suggested that oxidative stress may be associated with MTC or enhance the risk of developing the disease. Another study in 2016 in an Iranian population with MTC showed that serum TAC, catalase (CAT), and glutathione (GSH) levels were lower in MTC patients. Accordingly, oxidant/antioxidant imbalance could be associated with an increased risk of medullary thyroid cancer (19).

In our study, the ATC group showed no significant change in OSI and TAC levels. In the study by Wang et al. (14), the OSI value was not changed in ATC patients. Another study by Erdamar et al. (20) evaluated the oxidative markers in the serum of 41 patients with multinodular goiter and PTC. They examined malondialdehyde, selenium, total superoxide dismutase, and glutathione peroxidase in selected patients. Accordingly, superoxide dismutase, glutathione peroxidase, and selenium levels were found to be lower and malondialdehyde to be higher in both nodules and cancerous tissues when compared to patients with nontoxic multinodular goiter. They showed that lipid peroxidation was increased, and the enzymatic free-radical defense system was impaired in patients with multinodular goiter and PTC (20). In the study by Famil Sagharchian et al. (21), serum TAC and malondialdehyde contents were low and high in PTC individuals, respectively. Lassoued et al. (22) showed that oxidative status was highly disturbed in PTC patients. However, in the present work, OSI and TAC were not changed in PTC patients.

The opposite results may be because the levels of oxidative stress markers in blood samples are different from those in thyroid tissue samples. In addition, genetic variants may be influenced by oxidative stress markers in different individuals. Moreover, by considering only some of the antioxidant enzymatic activities, the role of the oxidative stress index could not be conducted, which was done in our study by measuring TOS and TAC levels. In 2011, for the first time, Wang et al. (14) recommended measuring the OSI in individuals with thyroid cancer. They reported that TAC and TOS levels were significantly different between healthy and thyroid cancer groups. However, they did not find any difference in the serum concentrations of TAC, TOS, and OSI between carcinoma subtypes (14). Nevertheless, in our study, tissue concentrations of TAC, TOS, and OSI were considerably changed in MTC and FTC cancer subtypes.

As the results showed, the OSI was higher in females with thyroid cancer than in males. Previous studies also showed that thyroid cancer is more prevalent in females than in males. High levels of H2O2 are generated in the thyroid gland that regulates cell survival, proliferation, migration, and death. The cellular oxidant-antioxidant imbalance may contribute to the more incidence of thyroid cancer among females. In addition, 17β-estradiol administration was observed to increase H2O2 generation in a thyroid cell line (PCCL3 cells) (22). In the process of thyroid cancer, estrogen receptors may be developed and proliferated (23). Fortunato et al. (24) showed that the thyroid antioxidant defense of female rats was weaker than that of male rats. In our results, TAC levels were also lower in female patients with thyroid cancer than in male patients. Besides, benign nodules showed a high level of TAC. In contrast, in the study by Stanley et al. (25), the oxidant-antioxidant balance was undisturbed in benign thyroid tumors, whilst in malignant tumors, the balance was altered.

Interestingly, the antioxidant system has a bi-directional role in tumorigenesis. In benign thyroid nodules of rats, the SOD level was enhanced but gradually diminished as cancer cells progressed towards a more de-differentiated phenotype (26). In mice, SOD overexpression elevated the burden of benign tumors but suppressed the progression of FTC. Hence, antioxidant/oxidant imbalance may contribute to the conversion of normal thyroid tissue to benign tumors.

Thyroid hormones play an important role in the generation of free radicals. Thyroid hormones modulate the production and degradation of non-enzymatic and enzymatic antioxidants (27). However, in this study, thyroid hormone levels of benign and all cancer subtypes were not considerably changed when compared to control individuals. In the study by Wang et al., the oxidative stress value was not correlated with the hormone profile (14).

This study showed that the OSI could not be considered a valuable prognostic biomarker because it was increased in MTC and individuals with benign nodules. The role of this index in differentiating various types of this cancer is debatable. The difference in the OSI between cancer subtypes indicates that oxidative stress may be more involved in the pathogenesis of MTC and FTC than in other subtypes. The diverse oxidative stress status between genders may be a critical factor in explaining the elevated cancer incidence in females.

Copyright © 2021, International Journal of Endocrinology and Metabolism. This is an open-access article distributed under the terms of the Creative Commons Attribution-NonCommercial 4.0 International License (http://creativecommons.org/licenses/by-nc/4.0/) which permits copy and redistribute the material just in noncommercial usages, provided the original work is properly cited.
download pdf 313.85 KB Get Permission (article level) Import into EndNote Import into BibTex
Number of Comments: 0