Effect of Growth Hormone Therapy in Patients with Noonan Syndrome: A Retrospective Study 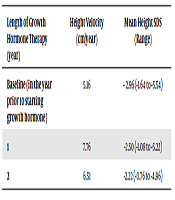 Noonan syndrome is an autosomal dominant condition with an incidence of 1:1000 to 1:2500. The disorder is associated with distinct dysmorphic features, cardiac anomalies, developmental delay and delayed puberty. Short stature is a recognised feature of Noonan syndrome.

The aim of this study is to assess the effect of growth hormone treatment in patients with Noonan syndrome.

Retrospective data was collected from patients with Noonan syndrome treated with growth hormone. The results were analysed with variables expressed as mean values and standard deviation scores.

Noonan Syndrome (NS) is a genetic condition with an incidence of 1:1000 to 1:2500 and is equal between males and females (1-3). The majority of cases are autosomal dominant, but it is thought that up to 50% of cases are sporadic (1-3). The disorder is recognised by distinct clinical features, which include hypertelorism, low-set ears and ptosis (2-4). NS is also associated with cardiac abnormalities, such as pulmonary valve stenosis and left ventricular hypertrophy, hypogonadism, developmental delay, chest deformities and delayed puberty (1-4). NS has also been associated with increased risk of benign and malignant conditions, such as leukaemia and solid tumours, most in patients with PTPN11 mutation (1, 5-9).

The pathophysiology for short stature in NS remains unclear. It has been proposed that individuals with NS could be growth hormone (GH) deficient, have neurosecretory dysfunction or GH resistance (1). Noordam et al investigated seventeen patients with NS and associated short stature and noted that 94% of their patients had optimal GH levels following stimulation (12). However, when overnight GH secretion was monitored, half of the patients had low GH secretion suggesting the possibility of neurosecretory dysfunction (12). Six male patients had an unusual pattern of GH with high trough levels. The baseline GH levels were always above 2.5mU/L, but the peaks were similar to other participants in the study suggesting the possibility of GH resistance (12). Limal et al found low insulin-like growth factor (IGF-1) levels, especially those with a PTPN11 mutation (13). These results were supported by Binder et al’s study (14) who found that GH levels were higher in overnight secretion and stimulation tests in patients with PTPN11 mutations, compared to those without (14). These results also suggest that GH resistance may potentially cause short stature in patients with NS (14).

The aim of this study is to evaluate the effect of GH treatment on a cohort of patients with NS and short stature during the first two years of treatment.

Patients with NS treated with GH at a tertiary Children’s Hospital in Liverpool, United Kingdom, were identified. Data was collected retrospectively from the paper medical notes and information was transferred to an electronic database. Research and development approval was obtained (number 6094) and informed consent was not required. Information collected included length of treatment to date and height velocity (HV) for each year on medication. The height measurements were undertaken during the outpatient appointments by trained health care professionals using a standardised stadiometer.

The results were analysed with variables expressed as mean values and SDS and statistics were determined using the t-test with a P-value of less than 0.05 being classed as statistically significant.

The results of the study show that the height SDS in patients with NS significantly improved in the first two years of GH therapy compared to baseline. HV improved significantly during the first year of GH treatment and remained higher than baseline for the second year.

Data regarding the effect of GH therapy on final adult height in patients with NS remains limited. As previously mentioned, Kirk et al found that the final height increased following treatment, but only a few patients gained more than five centimetres in height (10). In contrast, Romano et al showed an average improvement of 10.9 cm and 9.2 cm for males and females, respectively, following an average length of 5.6 years of treatment (16). Both studies used the same model to predict final adult height.

Seo et al reviewed twelve studies and concluded that GH treatment does improve height and HV (1). The authors concluded that factors such as longer course of treatment, starting treatment at a younger age and increased height at puberty were related to improved final adult height (1). These suggestions were also supported by Noonan et al following a review of fifteen studies (2). Giacomozzi et al published a systematic review on the impact of GH on the final adult height in patients with NS (3). The authors reviewed six studies and concluded that the evidence available is not sufficient to support the use of GH in the treatment of short stature in NS (3). The controlled trial used an average growth hormone dose of 0.047mg/kg/day, whereas the doses for the five uncontrolled trials ranged from 0.033 to 0.066mg/kg/day (3). The authors did not find a significant correlation between the dose of treatment and the response in height (3).

Finally, potential concerns have been raised about the safety of GH treatment in patients with NS, especially in those with cardiac anomalies. All the patients in our study tolerated the medication well and were regularly followed up by the cardiology and endocrinology teams. No specific side effects related to growth hormone treatment were noted in these patients. The reviews and studies discussed have also demonstrated GH therapy to be safe with no significant side effects (1-4, 15). GH has been thought to trigger proliferation of normal and malignant cells (9). Current literature has not found an association between GH therapy and increased risk of malignant disorders in patients who are not more likely to be predisposed to cancer from a genetic condition (9, 17). There is only limited data regarding the increased risk of cancer in patients with NS who are treated with GH. Krishna et al reported two NS patients who were diagnosed with brain tumours (18). Case one had a known PTPN11 mutation and was diagnosed with a dysembryoplastic neuroepithelial tumour fifteen months after starting GH treatment. His HV reduced at twelve months post tumour resection and GH therapy was restarted. The size of the residual tumour did not change over the next year and at the time of publishing, the patient remained on GH (18). Case two also had a known PTPN11 mutation and was diagnosed with pilocytic astrocytoma after eighteen months on GH treatment. The patient was fifteen years old at the time of diagnosis and then remained off GH permanently. One-year post resection, the tumour was stable. The authors are unable to conclude whether the tumours were present prior to GH treatment or whether they progressed following GH therapy. The authors recommend a baseline MRI scan of brain prior to starting GH treatment in patients with NS (18).

Limitations of our study include small sample size and non-availability of data regarding the final height and genotype. Therefore, we were unable to comment on the long-term effect of GH therapy on final adult height in NS patients and whether the genotype has influenced the HV during the treatment course.

Copyright © 2020, International Journal of Endocrinology and Metabolism. This is an open-access article distributed under the terms of the Creative Commons Attribution-NonCommercial 4.0 International License (http://creativecommons.org/licenses/by-nc/4.0/) which permits copy and redistribute the material just in noncommercial usages, provided the original work is properly cited.
COMMENTS