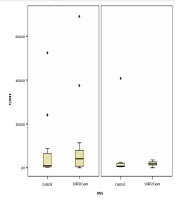 The 5 Alpha-reductase type 2 deficiency (5ARD2) is an inherited condition, which clinically presents as variable degrees of under virilization in affected 46,XY individuals. In the diagnostic pathway of 5ARD2, the testosterone/dihydrotestosterone (T/DHT) ratio is broadly employed before molecular analysis of the SRD5A2 gene. However, due to cost-benefit considerations, the DHT test in our country is routinely lacking in clinical settings; therefore, we considered applying the urinary etiocholanolone/androsterone (Et/An) ratio as an alternative test.

We aimed to determine the diagnostic value of the urinary Et/An ratio versus the T/DHT ratio in diagnosing 5ARD2 patients and carriers.

Sixty-six suspected 5ARD2 46,XY disorders of sex development (DSD) individuals and 95 family members were recruited in the study. Their clinical manifestations, T/DHT and urinary Et/An ratios, and SRD5A2 genes were analyzed. Using molecular analysis of the SRD5A2 gene as the gold standard, we compared the accuracy of both ratios in diagnosing 5ARD2 patients and carriers with receiver operating characteristic (ROC) curve analysis.

The testosterone/DHT ratio was inaccurate in diagnosing 5ARD2 patients. When molecular analysis for the SRD5A2 gene is lacking, the urinary Et/An ratio may be a useful test to diagnose 5ARD2 patients and carriers.

The SRD5A2 gene, which encodes the DHT enzyme, is located at chromosome 2p23.1. Various defects at the SRD5A2 gene have been reported to manifest clinically as 5 alpha-reductase type 2 deficiency. This condition is an autosomal recessive disorder characterized by variable degrees of under virilization in affected 46,XY individuals, ranging from micropenis, hypospadias, and genitalia ambiguity to the female external genitalia. Individuals with the classic phenotype are usually reared as female and become virilized during puberty. This may lead to gender changes and sociopsychological problems (1-3). Approximately 55% - 63% of 5ARD2 patients chose to be reassigned as male (4).

Since the reporting of the initial cases (3, 5, 6), there have been many reported 5ARD2 cases around the world (7-15), including Indonesia (16-18). For the diagnosis of 5ARD2, the testosterone/dihydrotestosterone (T/DHT) ratio is primarily used by clinicians in our country before ordering the molecular confirmation test. However, the DHT test is not readily available and has to be sent abroad, resulting in increased costs and delays in 5ARD2 diagnosis. Furthermore, the T/DHT ratio was reported to be inconclusive in detecting 5ARD2 cases, and currently, the consensus on the cutoff to interpret the ratio is lacking (14, 19).

Urinary steroid profiling (USP) is known to have a significant role in diagnosing several disorders affecting steroid metabolism, including congenital adrenal hyperplasia, Cushing syndrome, 17 beta-hydroxysteroid dehydrogenase, 3 beta-hydroxysteroid dehydrogenase, and 5 alpha-reductase type 2 deficiency (5, 6, 20, 21). Chan et al. (19) reported convincing results of USP using ratios of urinary 5β/5 steroid metabolites, including etiocholanolone/androsterone (Et/An), in detecting 15 cases of 5ARD2 and thereby, proposed the use of USP in the diagnostic algorithm of 5ARD2, replacing the use of the T/DHT ratio and molecular analysis. Furthermore, according to reports by Imperato-McGinley et al. (22), the urinary 5β/5α steroid metabolite ratios, including the Et/An ratio, might be useful in discriminating carriers of 5ARD2 and normal individuals. Since the Et/An ratio has never been employed in the diagnosis of 5ARD2 cases and carriers in our country, it is warranted to have supported data from our series.

We aimed to analyze the diagnostic value of the urinary Et/An ratio versus T/DHT ratio in detecting 5ARD2 patients and carriers.

The study was conducted concurrently with another study to characterize molecular defects in our 5ARD2 cases. The main results of the molecular study were published elsewhere (18) and revealed 37 of our 46,XY DSD subjects had pathological variations of the SRD5A2 gene in both of their alleles. Among those subjects, 20 carried severe mutations, while 17 had benign mutations (the p.Val89Leu).

We recruited 46,XY DSD individuals, who were suspected of having 5ARD2, and their eligible close family members (parents, siblings, aunts, uncles, and grandparents) as study participants. We excluded subjects, who underwent external and/or internal genitalia surgery without a written record on their clinical phenotypes, who had steroid treatment within four weeks before hormonal tests, and who had renal dysfunctions. Subjects’ characteristics on age, age at diagnosis, sex rearing, gender change, and pubertal stages were collected. The evaluation of external genitalia appearances (the phallus size, the location of gonads and urethral meatus, and the presence/absence of labioscrotal fusion) was performed using the external genitalia masculinization score (EMS) as defined earlier by Ahmed et al. (23).

The DNAs of the study participants were analyzed for SRD5A2 gene defects. Hormonal profiles, including T, DHT, and the urinary Et/An ratio, were also obtained. Furthermore, to compare the diagnostic value of the T/DHT and urinary Et/An ratios in diagnosing 5ARD2 patients and carriers, we used receiver operating characteristic (ROC) curve analysis by employing molecular analysis of the SRD5A2 gene as the gold standard. The study protocol followed the ethical standards of the Health Research Ethics Committee of the Faculty of Medicine, Universitas Indonesia, with regards to the protection of human rights and welfare in medical research with approval number 576/UN2.F1/ETIK/2016.

Sixty-six suspected 5ARD2 patients (age one month to 42 years) and 95 family members (age 36.3 ± 12.5 years) gave consent and took part in the study. Among the patient group, 37 were confirmed to have SRD5A2 gene variants in both alleles, and 53 family members were detected as carriers. A total of 46,XY DSD patients who were normal or heterozygous for SRD5A2 gene mutations (29 subjects) were included as controls in the ROC curve analysis for the patient group, and 42 family members who were normal for the SRD5A2 gene were recruited as controls in the ROC analysis for the carrier group. The characteristics of the subjects are summarized in Tables 1 and 2. Among the patient group, age, age at diagnosis, sex rearing, and pubertal stage were not significantly different between the patient and control groups, nor was the T/DHT ratio (Table 1). The EMSs were also comparable between the two groups. However, the urinary Et/An ratio was significantly different between the two subgroups in both patients (Table 1) and carrier groups (Table 2). 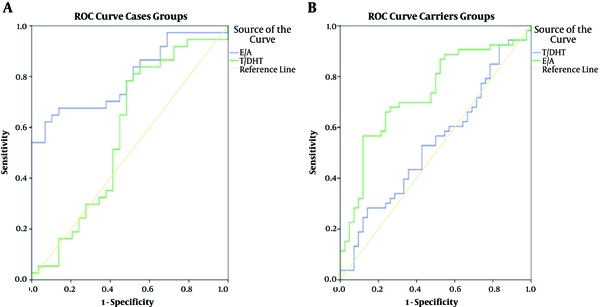 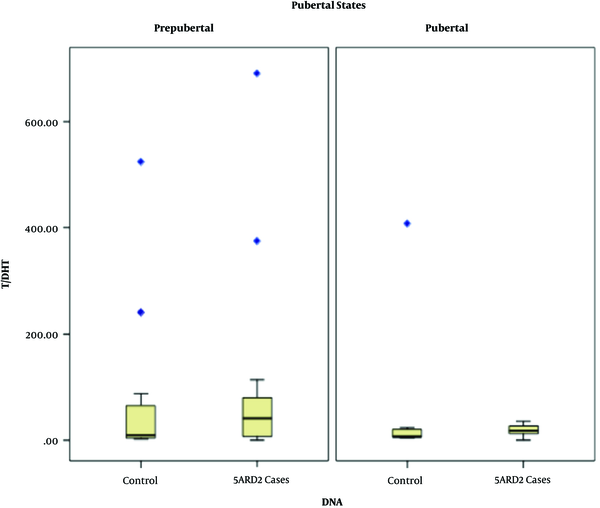 The accuracy of the T/DHT ratio obtained in this study was beyond our expectations (Tables 1 and 2, and Figure 1). First, we considered that not performing the hCG stimulation test for all prepubertal patients was the cause of this result. However, after analyzing the ratio separately by pubertal stage, the result was similar (Figure 2). In contrast, the urinary Et/An ratio revealed promising results. The urinary Et/An ratio is the only test available for assessing the urinary 5β/5α steroid metabolite ratio in Indonesia. Despite the low sensitivity of this ratio in detecting 5ARD2 patients and carriers, having this result may add evidence to implement the ratio in clinical practice, especially if molecular diagnostic services are not accessible.

Since we did not have any reference values for our normal individuals, we applied cutoff values, which were determined by a linear graph of sensitivity and specificity from the ROC curve data. Using these cutoff values for detecting 5ARD2 patients (≥ 0.95) and carriers (≥ 0.99), the sensitivity and specificity of the urinary Et/An ratio for diagnosing patients were 67.57% and 86.2%, respectively, while for diagnosing carriers, the sensitivity was 67.92% and the specificity was 73.81%. These results were lower than those in other published studies (19, 21, 28). This discrepancy may have been caused by different study methods, the severity of the cases included, and lack of controls in the studies. Twelve of the 16 5ARD2 patients reported by Chan et al. (19) carried deteriorating mutations in both alleles. Meanwhile, in Lucas-Herald et al.’s report (21), only two 5ARD2 patients, who lacked data on molecular defects, were detected among 84 patients. Approximately half of the cases in our series were mild (17 out of 37), which may have led to equivocal hormonal results (18). This might also explain the insignificant difference in cutoff values of the ratios for detecting patients and carriers. The p.Val89Leu variation in the SRD5A2 gene is considered a polymorphism because it is also detected in normal individuals. However, several studies have reported its specific characteristics, which could decrease enzymatic activity by 30% (9, 29, 30), and further reduction may occur if it is combined with other damaging SRD5A2 gene mutations.

In diagnosing 5ARD2, we proposed to use cutoff values of the urinary Et/An ratio based on the diagnostic value calculated in Table 3 instead of the reference values. Considering the influence of ethnic background on urinary metabolite ratios (31), we used the reference value determined by Chan et al. (19) to make a comparison with our results, as our patients were Asian. Using the cutoffs determined in this study, the sensitivity and accuracy of the test yielded better results.

The urinary Et/An ratio showed interesting results. Although the diagnostic value did not appear sufficiently convincing, we believe this may lead to a more obvious path in diagnosing carriers, especially when other 5β/5α steroid metabolite ratios are added. This study added informative data with cutoffs of the metabolite ratio, which may be implemented in clinical settings. To date, there have been no tests that can determine 5ARD2 carriers, except USP and molecular analysis. Since molecular analysis is not available in most regions in our country and still considered costly, the urinary Et/An ratio is an alternative test in detecting more patients and carriers and may contribute to genetic counseling of 5ARD2 patients.

Copyright © 2021, International Journal of Endocrinology and Metabolism. This is an open-access article distributed under the terms of the Creative Commons Attribution-NonCommercial 4.0 International License (http://creativecommons.org/licenses/by-nc/4.0/) which permits copy and redistribute the material just in noncommercial usages, provided the original work is properly cited.
download pdf 465.75 KB Peer Review Comments ( 126.30 KB) Get Permission (article level) Import into EndNote Import into BibTex
Number of Comments: 0