A Pediatric Parathyroid Carcinoma: An Unusual Clinical Presentation and Mini-review 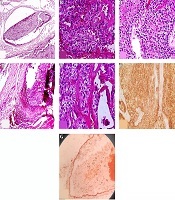 Primary hyperparathyroidism (PHPT) is a rare condition in the pediatric population. Parathyroid carcinoma (PC) is a very uncommon cause of PHPT, accounting for < 1% of pediatric PHPT cases. It is challenging to distinguish between parathyroid adenoma (PA), the most common cause of PHPT, and PC. In this report, we described a young female who presented with a history of progressive limping and was finally diagnosed with PC.

PC should be considered as a differential diagnosis of PHPT in the pediatric population, even in the presence of mild hypercalcemia.

Primary hyperparathyroidism (PHPT), characterized by hypercalcemia due to excessive parathyroid hormone (PTH) secretion, is now recognized as the third most common endocrine disorder in the adult population (1), with a prevalence of 8 in 1000 in the general population (2). On the contrary, PHPT is a very rare condition in the pediatric population, with an estimated incidence of 2 - 5 cases per 100,000 people (1, 3). Furthermore, young patients with PHPT usually present with clinical signs and symptoms of hypercalcemia, including fatigue, anorexia, vomiting, skeletal disorders, and renal stone, whereas adult patients are often asymptomatic (1, 4).

Approximately 80% of pediatric PHPT cases result from PAs (5). Other causes include different genetic syndromes, namely multiple endocrine neoplasia 1 (MEN1), MEN 2A, hyperparathyroidism-jaw tumor syndrome (HPT-JT), and familial isolated hyperparathyroidism (FIHP) (6). PC is a rare cause of PHPT (< 1%), with only a few case reports describing this carcinoma in pediatric PHPT cases (5-8). The challenging issue is to distinguish between PA and its rare malignant counterpart. The diagnosis of carcinoma is often made histologically, after a local recurrence, or when a distant metastasis is present (2, 5, 9).

In this report, we described a young female who presented with a history of progressive limping and was eventually diagnosed with PHPT due to PC.

A 15-year-old girl presented with a history of progressive limping for 8 years. Another symptom was diffuse bone pain for 3 years. Family and drug histories were unremarkable. On physical examination, a large, firm, and non-tender mass was palpable in the right thyroid lobe. Left hip range of motion was limited in all directions, both actively and passively, and tenderness was present on left femoral head palpation. The rest of the physical examination was normal. 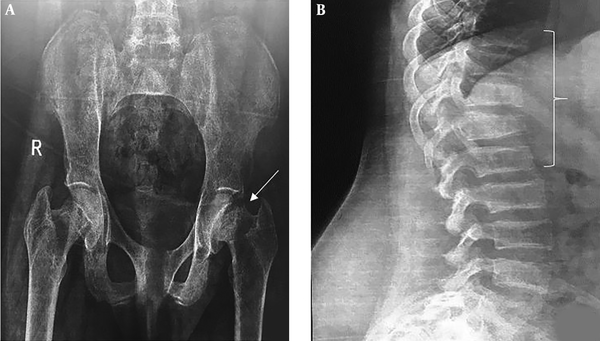 Dual-phase sestamibi scintigraphy was performed for the patient after intravenous (IV) injection of 540 MBq of 99mTc-MIBI. The early scan images (at 20 minutes) revealed high thyroid uptake in the right lobe with a suppressive effect on the left side. Increased radiotracer uptake was seen in the right lobe without proper washout on delayed images, which was higher and larger than is expected with PAs (Figure 2A). A thyroid scan was also done two days later, after IV injection of 185 MBq of 99mTc from the anterior view to rule out a thyroid nodule. This scan revealed a focal decreased uptake in the upper pole of the right lobe, which was smaller compared with the finding of the parathyroid scan (Figure 2B). The discrepancy between the two scans led to further investigation into the underlying pathology. Neck ultrasound revealed an enlarged right thyroid lobe compatible with intra-lobar necrosis and echogenic regions with the approximate size of 20 mm compatible with the parathyroid gland (Figure 3A and B). 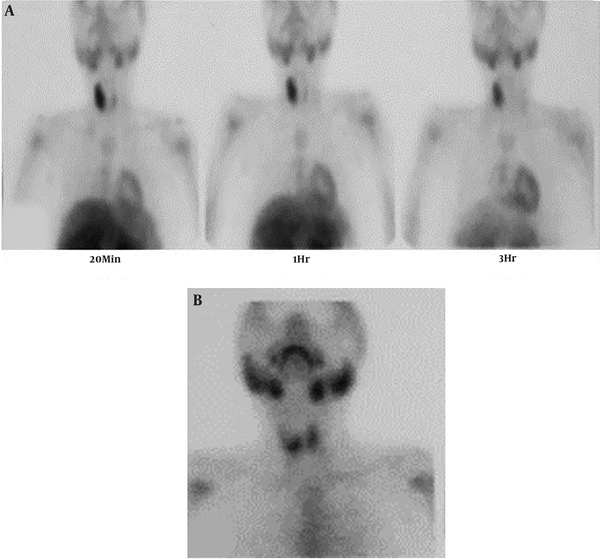 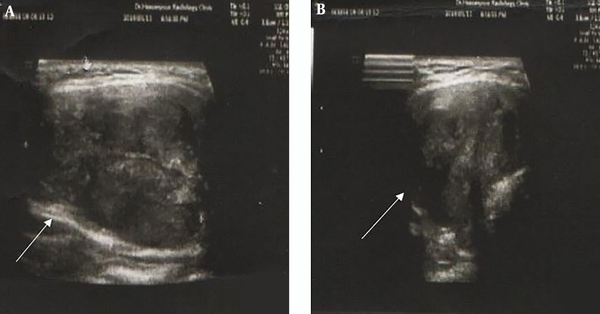 The patient was referred to an experienced surgeon for neck exploration and parathyroidectomy. She underwent open surgery. The parathyroid mass had infiltrated to the surrounding thyroid tissue; hence, right thyroidectomy, isthmectomy, and right inferior parathyroidectomy were performed. The remaining parathyroid glands were examined during the operation and were normal. She experienced hungry bone syndrome postoperatively, which was managed appropriately. Finally, serum calcium and iPTH levels decreased to a level of 8.7 mg/dL (8.5 - 10.5 mg/dL) and 24 pg/mL (15 - 65 pg/mL), respectively. The operative phosphorus level was 2.3 mg/dL. 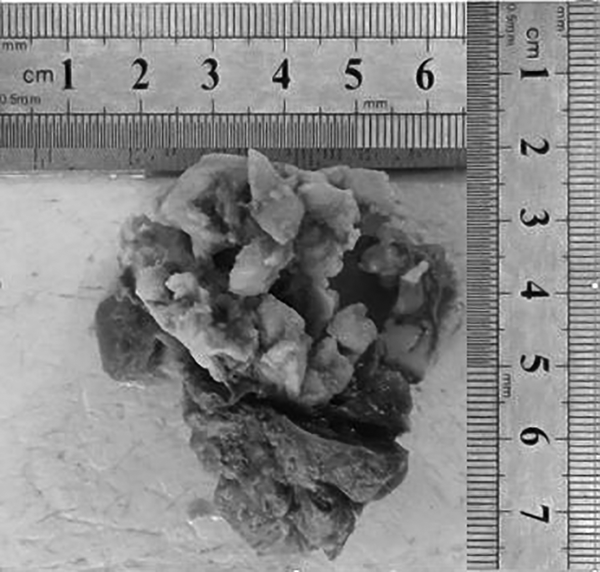 Histologic examination showed uniform chief cells presenting as nodules and sheet growth with proliferated blood vessels that were separated by a broad fibrous capsule from the adjacent thyroid tissue. The tumor had invaded the capsule and blood vessels. IHC staining for CD34 confirmed vascular invasion. IHC was also diffusely positive for CK in the tumor and tumor cells attached to endothelial cells. Ki67 was also positive in 2% - 3% of tumor cells. However, other markers, such as CD45, thyroid transcription factor 1 (TTF-1), and Pax5 were negative (Figure 5A-G). 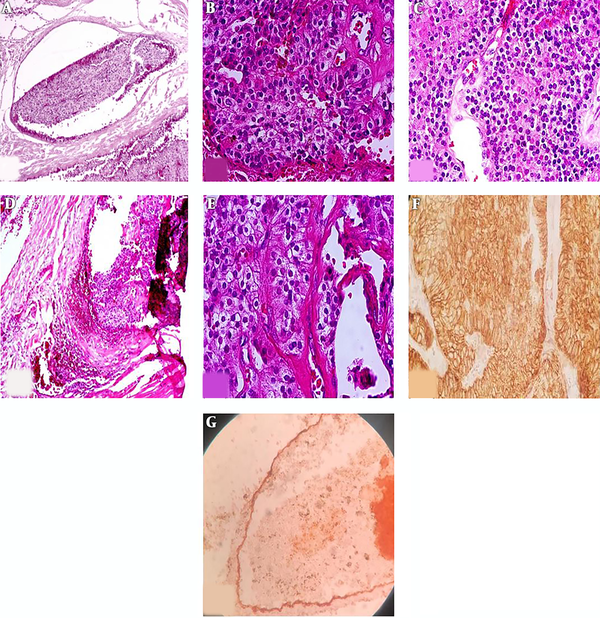 Whole exome sequencing (WES) study was done for the assessment of familial hyperparathyroidism and MEN1. The genetic study demonstrated no mutation in CDC73 and menin genes. However, there was an incidental mutation in the breast cancer 1 (BRCA1) gene.

We performed an extensive search using different databases, including Medline, PubMed, Scopus, ScienceDirect, and Google Scholar to find all published cases of PC in children and adolescents. We used the following combination of keywords: parathyroid carcinoma or parathyroid cancer or parathyroid neoplasm or parathyroid malignancy, and pediatrics or child or adolescent or boy or girl. We could find 16 papers reporting 17 cases of pediatric PC from 1972. Table 2 summarizes the published papers.

Table 2. Published Cases of Pediatric Parathyroid Carcinoma From 1972 to 2020

According to these reports, the male to female ratio was 0.6. The youngest and oldest patients were 8 and 16 years old, respectively. The most common initial presenting symptoms were related to hypercalcemia, including anorexia, vomiting, polyuria, polydipsia, fatigue, bone pain, and renal calculi. Sixty percent had a palpable neck mass. Nearly 50% had skeletal involvement, including fracture and deformity. Only three patients had experienced weight loss. Pancreatitis was a rare condition diagnosed in one case. Nearly 20% had metastasis, most common sites were lung and cervical lymph nodes, and all cases with pulmonary involvement had experienced relapse and hypercalcemia after the initial operation. The range of serum calcium and iPTH was 12 - 20.7 mg/dL and 300 - 8638 pg/mL, respectively. IHC had been reported in two cases, which were both positive for parafibromin (6). Three cases had deletion mutation of CDC73, and another case was negative with regard to menin gene mutation. Three patients had a positive family history of primary hyperparathyroidism. There was no predominant tumor location site at the neck.

Here, we presented an extremely rare endocrine disease. The aforementioned case was a girl who presented with longstanding limping and bone pain. The complementary examination revealed a palpable right neck mass and left hip fragility fracture.

Little evidence exists with regard to PC in pediatrics compared with adults; therefore, our review is mostly based on adult PC. This review article focused on the epidemiology, etiology, pathogenesis, clinical presentation, diagnosis, management, and prognosis of PC.

The estimated incidence of PHPT in children is 2 - 5 cases in 100,000. PC is responsible for less than 1% of the PHPT causes (1-3). It is considered an extremely rare malignancy among endocrine malignancies. The estimated incidence and prevalence of PC are 0.015 per 100,000 population and 0.005%, respectively (21). In most adult studies, PC accounts for less than 1% of PHPT cases; however, in Japan, Europe, and the United States, it is responsible for 0.017% to 5.2% of adult patients with PHPT (21, 22). There appears to be a female predominance; nonetheless, the reported cases of PC in the pediatric population are limited.

According to a meta-analysis, the pathophysiology of PHPT is different in adults and children. This may be due to increased sensitivity to iPTH at the level of target tissues and decreased negative feedback of the parathyroid gland to calcium (1).

The exact etiology and pathogenesis of PC are unclear. PC occurs sporadically. Although neck irradiation could be a risk factor for PAs, its role is less clear in PC (23). End-stage renal disease (24), underlying parathyroid hyperplasia, or adenoma are the uncommon causes (25).

A genetic marker associated with PC is the CDC73 gene that encodes parafibromin. It is related to HPT-JT and FIHP and is found in up to 80 % of sporadic PC cases. Other genetic markers include cyclin D1, retinoblastoma 1 (RB1), and BRCA2, which are abnormally expressed in some parathyroid cancers (26). Mutated MEN1 and rearranged during transfection (RET) genes have been shown in MEN1 and MEN2A syndromes, respectively. Yet, less than 0.01% of MEN1-related parathyroid tumors are malignant (27).

Of note, most cases of PC are functional and almost all of them are symptomatic (e.g. polyuria, polydipsia, anorexia, vomiting, weakness, weight loss, and neurocognitive signs or symptoms related to hypercalcemia and elevated PTH) (23). The review of the pediatric population with benign PHPT showed that children and adolescents are more often symptomatic than adults at the time of diagnosis. Besides, they present with more end-organ manifestations compared with adults (7). Nonfunctional PC is an atypical presentation and accounts for less than 10% of PCs. It often presents as a palpable cervical mass that can compress the surrounding structures and cause hoarseness and/or dysphagia (28).

Although benign PA is the most common cause of PHPT and it is difficult to distinguish between carcinoma and adenoma prior to parathyroidectomy, some remarkable clinical and biochemical clues can guide the clinician to suspect PC as a cause of PHPT. These include male gender, an average age of 50 years at the time of diagnosis (28), and serum calcium greater than 14 mg/dL or 3 - 4 mg above the upper limit of the normal range. PTH level is more than twice and is often 3 - 10 times higher than the normal limit in PC; however, it is less than twice the normal upper limit in PA. Clinically, PC patients often have both kidney and bone manifestations at diagnosis (i.e., nephrolithiasis, renal failure, renal colic, bone pain, pathological fractures, and osteitis fibrosa cystica) (23). Significant elevation in total serum alkaline phosphatase, which is a marker of synchronous skeletal and kidney involvement, is often seen in patients with HPT/JT and/or cases belonging to a family with HPT/JT syndrome. Ultrasonographic features of an extrathyroidal neck lesion, invasion to the adjacent tissue, local invasion, and metastases found intraoperatively or on parathyroid sestamibi scintigraphy and/or on computed tomography scans preoperatively, unilateral vocal cord palsy and/or a palpable neck mass, and concomitant hypercalcemia are other signs of PC (29). Pancreatitis, anemia, and peptic ulcers are other rare manifestations (23).

Studies have shown that human chorionic gonadotropin (hCG) and its malignant hyperglycosylated isoform are found in serum and urine of PC patients. However, further studies should be done to establish the clinical value of these findings (28).

Surgery is the treatment of choice, and the best method is en bloc excision with ipsilateral thyroid lobectomy and removal of involved lymph nodes; however, en bloc excision is only performed in 12% of cases (23). During the surgery, it is advised to examine all four glands because synchronous involvement of glands has been shown in some studies (30).

Survival depends on the presence of a variety of factors, including the type of surgery, (i.e., parathyroidectomy versus radical resection [en bloc]), high serum calcium and/or intractable hypercalcemia, local recurrences and/or metastases, CDC73 mutation, and/or loss of parafibromin staining or calcium sensing receptor (CaSR) protein, and finally, nonfunctioning PC, which are all poor prognostic factors for survival (23). Hypercalcemia-related complications are the main cause of mortality (28).

In conclusion, our case was a sporadic PC with fracture, which is really unique with regard to the long duration of symptoms and mild hypercalcemia. Despite a high level of PTH (44 times above the upper limit of normal), the patient had mild hypercalcemia. This might be due to low bone mass and/or low calcium intake. The results of this study suggest that the size of the tumor, the involvement of surrounded soft tissue by the tumor, very high serum level of iPTH, and ALP may be helpful to predict PC in children with PHPT before the primary operation.

We would like to thank the Hormozgan University of Medical Sciences, Bandar Abbas, Iran.

Copyright © 2021, International Journal of Endocrinology and Metabolism. This is an open-access article distributed under the terms of the Creative Commons Attribution-NonCommercial 4.0 International License (http://creativecommons.org/licenses/by-nc/4.0/) which permits copy and redistribute the material just in noncommercial usages, provided the original work is properly cited.
COMMENTS