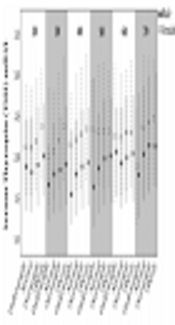 To investigate the associations of thyroid-stimulating hormone (TSH), free triiodothyronine (FT3) and free thyroxine (FT4) with body mass index (BMI) and the effect of age and gender on these relationships in a large Chinese population.

A total of 97,997 individuals from a health examination center were selected. The medians (25th and 75th) of TSH, FT3 and FT4 were used to explore the trends based on gender, 10-year age groups and BMI. The relationships of TSH, FT3 and FT4 with BMI were assessed by generalized additive models (GAM) along with adjusting the effect of age and gender.

After applying our exclusion criteria, 77,991 euthyroid participants (45,428 males and 32,563 females) were analyzed. The medians of TSH level based on BMI groups were significantly higher in female participants than those in males in all age groups (P < 0.05), and the median FT3 level was lower in female subjects; however, there was no significant difference between male and female subjects in median FT4 level. The GAM analysis showed the non-linear positive association of TSH and FT3 with BMI, and these relationships were markedly influenced by age and gender. However, FT4 had a negative relationship with BMI, with neglectable effect of age and gender.

Thyroid glands play an important role in the metabolism and growth of the human body by secreting thyroid hormones. Previous studies on thyroid-mediated regulation focused largely on patients with thyroid dysfunctions (1-4). Some studies have shown an association between thyroid hormone levels and body mass index (BMI), although the results are still controversial. In a 2006 study on 361 women and 40 men in the United Kingdom, Manji et al. reported lack of any relationship between either serum thyroid-stimulating hormone (TSH) or free thyroxine (FT4) level and BMI, since no difference was seen in the serum levels of either hormone between lean and obese subjects (5). In contrast, Sakurai et al. showed a significant positive relationship between serum TSH level and BMI among male subjects in a 2014 study on 1,044 men and 993 women in Japan (6). In contrast, Kitahara et al. found that TSH and FT3 were positively associated with BMI, while such an association did not exist for FT4 in neither gender in a study on 1623 men and 1491 women in the USA (7). Meng et al. reported a positive relationship between TSH level and BMI only among women in a study on 13,855 Chinese participants (8,532 men and 5,323 women) (8).

To address this ambiguity, we collected data from a large euthyroid Chinese population (77,991 individuals aged 20 - 80 years) in an iodine sufficient area and analyzed the relationship between thyroid hormone levels and BMI, age and gender.

In this cross-sectional study, 97,997 individuals were recruited at the health examination center of Sichuan Provincial People’s Hospital from October 2013 to April 2017. Essential demographic data like age, gender, height and weight and biochemical test results of TSH, FT3, FT4, thyroid peroxidase antibodies (TPOAb) and thyroglobulin antibodies (TgAb) were obtained from the patients’ medical records. In addition, body mass index (BMI) was calculated as weight in kilograms divided by height in square meters.

The study was approved by the Ethics Committee of Sichuan Provincial People’s Hospital.

Continuous variables were tested for normality by Kolmogorov-Smirnov test using histogram and Q-Q plot. Data with normal and nearly normal distributions are presented as mean ± standard deviation (SD), and those with non-normal distributions as median and inter-quartile range (IQR). The 25th and 75th percentiles were used for the definition of reference intervals and the medians. The 25th and 75th percentiles were calculated based on age/BMI groups in both genders. Independent t-test was used for parametric data and Wilcoxon rank sum test for non-parametric data when comparing age, BMI and TSH, FT3 and FT4 levels between men and women. The relationships between thyroid hormones and BMI with age and gender adjustment were generated using smoothing splines in generalized additive models (GAM) (9) by the “mgcv” package (version 1.8 - 24). All the statistical analyses were performed using R software (version 3.4.1) (10). P value less than 0.05 was considered statistically significant.

Table 1. Characteristics of the Study Population by Gendera

Figure 1 exhibits the percentiles (median, 25th and 75th) of TSH, FT3 and FT4 in the different BMI groups and age categories among male and female subjects. The median TSH levels were obviously higher in female participants compared to males in each age group (P < 0.05). The median FT3 levels were higher in males than in females before 60 years of age. However, the median FT4 levels showed no apparent difference between the two genders (Appendix 1 - 3 in Supplementary File). Table 2. The Result of the Generalized Additive Model on the Relationship of Body Mass Index with Thyroid Hormonesa,b,c

aThe level of complexity (nonlinearity) of each term of the model is determined by the estimated degrees of freedom (e.d.f.) of the smoother. An e.d.f. = 1 speaks of an almost linear relationship, while e.d.f. > 1 indicate a nonlinear relationship. Our study aimed to determine the association of TSH, FT3 and FT4 with BMI in a large Chinese population. GAM revealed that after adjusting for age and gender, significant changes were seen pertaining to the relationship of TSH and FT3 with BMI, but not regarding FT4.

For the relationship of serum FT3 level and BMI, Kitahara et al. performed a study of 1,623 euthyroid men and 1,491 euthyroid women and found that BMI was positively associated with FT3 level but not with FT4 level (12). Moreover, they reported an increase in FT3 level with every one-quartile increase in BMI in men (1.0%) and women (1.3%), after adjusting for age and other factors. In our study, FT3 had an rising trend with increasing BMI in men and women, which was consistent with Kitahara et al. findings.

As it is well known, TSH is secreted in response to feedback from circulating thyroid hormone, thyroid hormone regulates body weight balance and body fat mass after its activation from the T4 to the active form T3 (13). A higher TSH concentration may be the result of a lower thyroid function (14), which may lead to a lower basal metabolic rate and obesity (15). However, other studies found that thyroid function and obesity may affect each other, such that adipose tissue secretes leptin, which contributes to the alterations in the secretion of thyrotropin-releasing hormone (TRH) and affects the secretion of TSH (16). Thus, future biomedical studies are needed to assess the relationship between thyroid system and obesity. Walrand et al. found FT3 increased energy expenditure in both young and the old rats, but old rats lost more weight than young ones (17). Ortega et al. found FT3 was associated with absolute and annual percentage of changes in weight (r = -0.27, P = 0.02) in 89 euthyroid Indians, and the association remained significant (r = -0.28, P = 0.009) after adjusting for age and gender (18). These findings were consistent with our results regarding the fact that the relationships of TSH and FT3 with BMI were influenced by gender and age.

The limitation of this study was that smoking status, ethnicity, alcohol intake, dietary habits, education, physical activity, menopause, insulin, which could modify the relationship between thyroid function and BMI, were not considered (7, 11, 12, 19-21). Compared to previous studies, our study was stronger on account of the large cohort of participants, which enabled us to determine the association between thyroid hormones and BMI relative to age and gender. In addition, GAM is a flexible and effective method to determine the nature of such relationships.

Copyright © 2019, International Journal of Endocrinology and Metabolism. This is an open-access article distributed under the terms of the Creative Commons Attribution-NonCommercial 4.0 International License (http://creativecommons.org/licenses/by-nc/4.0/) which permits copy and redistribute the material just in noncommercial usages, provided the original work is properly cited.
2020-11-03 11:56:25
Very nice informative and impressive post you have written, this is quite interesting and i have went through it completely, an upgraded information is shared, keep sharing such valuable information.you can also checkBest Endocrinologist in Hyderabad