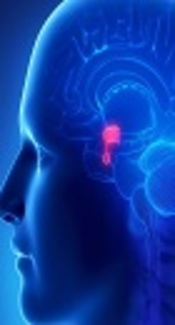 Schaaf-Yang syndrome (SYS) is caused by truncating point mutations of the paternal allele of MAGEL2, an imprinted gene located in the critical region of Prader-Willi syndrome (PWS). These patients present a phenotype with neurodevelopmental delay, hypotonia, joint contractures, and a particularly high prevalence of autism (up to 75% in affected individuals). The loss of function of MAGEL2 is suggested to contribute to endocrine hypothalamic dysfunction in individuals with PWS.

The current study presented the case of a patient with SYS and a novel de novo truncating mutation of MAGEL2 and phenotypic characteristics typical of this Prader-Willi-like syndrome and also including partial hypopituitarism, hypothyroidism, growth hormone deficiency, and hyperprolactinemia.

The clinical and molecular similarities between SYS and PWS suggested the need for a thorough endocrinological follow-up to improve the prognosis and long-term quality of life for patients with SYS.

Schaaf et al. (1) reported a series of individuals manifesting a phenotypic spectrum of neonatal hypotonia, feeding difficulties, weight gain, developmental delay/intellectual disability, behavioral abnormalities, hypogonadism, and short stature. In addition, some patients showed contractures of the finger joints. The complete genome or complete exome sequencing identified four individuals with truncating pathogenic variants in MAGEL2 gene. This gene is one of the genes encoding a protein in the maternally imprinted region of chromosome 15 (15q11-q13) with paternal copy lost or silent in children with Prader-Willi syndrome (PWS) (2). At least, a total of 34 new patients carrying deleterious variants in the paternal allele of MAGEL2 gene are diagnosed with Schaaf-Yang syndrome (SYS, OMIM #615547) (1, 3-7).

The current study presented a new case of a de novo heterozygous truncating mutation in MAGEL2 responsible for the so-called SYS. The patient presented the typical clinical features of this syndrome, including distal contractures (equinovarus foot), hypotonia with feeding difficulties in the neonatal period and autism spectrum disorder. She also presented digestive abnormalities, as well as partial hypopituitarism with central hypothyroidism and growth hormone (GH) deficiency. The latter are common in patients with PWS, but rarely described in patients with SYS, although both have common clinical and genetic findings.

A five-year and nine-month-old female was referred to pediatric endocrinology consultation for central hypothyroidism, short stature, and hyperprolactinemia. At first examination, her weight was 17.5 ± -1.19 kg (mean ± SD and height 94.8 ± -4.62 cm. She had a peculiar phenotype with rounded facies, micrognathia, broad forehead, strabismus, tapering/slender fingers, hypotonia of the lower limbs, muscle atrophy in the distal third of the lower extremities, and equinovarus feet. The patient did not walk independently until orthopedic shoes and walker were provided. The external genitalia were normal of a female.

She was born at term with a birth weight of 3550 g, height of 49 cm and head circumference of 36 cm. She required admission to the neonatology unit due to moderate neonatal depression, axial hypotonia with hypertonia of the upper limbs, weak suction with difficultly in swallowing, and frequent choking episodes with aspiration pneumonia.

The patient was followed-up by pediatric gastroenterology section for gastroesophageal reflux disease and recurrent pneumonia. She received omeprazole to treat the GI problem. She has recurrent crises of abdominal pain since the first year of life. These crises were preceded by presyncopal symptoms that include sweating, pallor, hypotonia, and decay, which occur every two or three months. Abdominal ultrasonography and brain magnetic resonance imaging (MRI) were normal. An upper gastrointestinal endoscopy was performed and confirmed a gastric volvulus; therefore, a gastropexy was performed. After surgery, she continued episodes of abdominal pain. In the last ultrasound scan, findings of intrahepatic portosystemic shunt were observed. These findings were confirmed with abdominal computed tomography (CT) scan evidencing an intrahepatic cavo-caval shunt with agenesis/hypoplasia of the intrahepatic inferior vena cava. Liver function and ammonium levels were normal.

She also presented signs of autism disorder, poor language development and a global developmental delay. Multiple genetic studies were performed without any etiological diagnosis: karyotype, array-CGH, and methylation test for Prader-Willi/Angelman alterations on 15q11-q13 as previously reported (8). Electromyography showed a myopathic pattern with continuous myotonia. Muscle biopsy was normal and genetic testing for myotonic dystrophy was negative. Genomic DNA from blood samples of the patient and her parents were collected for whole-exome sequencing. A DNA library was prepared using the Ion AmpliSeqTM Exome RDY kit (Thermo Fisher Scientific), and sequencing of the DNA library was performed with ion proton sequencing technology. The Ion Reporter version 5.0 platform was used to align the patient’s and her parents’ data to the reference genome and identify genetic variants. Variant data were filtered using population frequency, frequency in database of in-house samples, mode of inheritance, evolutionary conservation, functional predictors, and disease association, followed by detailed assessment for genotype-phenotype correlation, disease mechanism, and literature review, as described previously (9). After exome sequencing and variant prioritization, the presence of the heterozygous variant c.3019 C > T in the MAGEL2 gene resulting in the occurrence of a premature stop codon (p.Gln1007Ter) was detected. Since neither of her parents presented this change, this variant seemed to develop de novo in the patient. In addition, a methylation test was performed in order to determine if this mutation was present in the active or inactivated allele of the gene. The expression of this gene is subjected to imprinting, in such a way that the maternal copy is not active due to a hypermethylation of the CpG island present around the 5’ end of MAGEL2 gene. The analysis of the variant after using restriction enzymes sensitive to methylation allowed to conclude that this variant was indeed present in the allele of paternal origin, that is, in the only active copy of the gene. Accordingly, this change c.3019 C > T detected in the MAGEL2 gene was considered pathogenic and the cause of most, if not all, of the clinical manifestations present in the patient (Appendix 1 in Supplementary File).

From an endocrinological point of view, at the age of four, the patient’s blood test revealed signs of central hypothyroidism, hyperprolactinemia, and GH deficiency (thyroid-stimulating Hormone (TSH): 6.01 mU/L (ranged 0.5 - 4), free T4: 0.74 ng/dL (ranged 0.7 - 1.9), prolactin 452 ng/mL (ranged 2 - 29), insulin-like growth factor (IGF) - 1 < 25 ng/mL (ranged 32 - 259). Upon confirming these findings, she started treatment with L-thyroxine. When she was six years old she started treatment with recombinant human growth hormone (rhGH), 0.02 mg/kg/day, by subcutaneous injection, but the treatment was discontinued after one or two months because of benign intracranial hypertension. Therapy was restarted when she was nine years old with a height of 101.2 ± 5.74 cm. The first-year growth response was the following: height 109.6 ± -4.72 cm and growth rate of 9.1 cm per year (P100). After two years, her height was 120.3 ± -4.09 cm. Adherence to rhGH was positive with a rise in the IGF-1 levels ranging 97 - 150 ng/mL. Under treatment, the muscular tone also improved and the patient started to walk. Prolactin levels normalized, but high values of ACTH (aderno cortico tropic hormone) were observed with normal cortisol values (ACTH 370 pg/mL (ranged 9.0 - 40.0), basal cortisol 11.5 μg/dL (8h: 6.20 - 19.40) in the last blood tests. The patient is closely monitored.

In addition, the patient underwent surgery to correct her equinovarus foot deformity and is receiving rehabilitation treatment. She has also improved cognitively and is attending a special education school, presenting a good level of understanding although language continues to be dysprosodic. In sum, the patient has a moderate level of dependence in daily life activities.

The current study reported a patient with a pathogenic variant in MAGEL2 gene that caused SYS. Since this syndrome was described in 2013, there are very few cases published and still fewer in Spain (10, 11).

Although patients with SYS share some common characteristics with PWS, due to the few published cases, little is known about the endocrinological findings of such patients and their long-term evolution. Endocrine abnormalities are common in PWS due to hypothalamic dysfunction including GH deficiency, central adrenal insufficiency, hypogonadism, hypothyroidism, and complications of obesity such as type 2 diabetes mellitus (12). McCarthy et al. (13) reported the clinical characterization of nine individuals with SYS and their endocrine function. They suggested that a marked, but not complete, overlap existed between PWS and SYS. The combination of short stature, elevated fat mass/reduced lean mass, low bone density, and low IGF-1/IGFBP-3 levels suggested a GH deficiency similar to those of PWS. An increased prevalence of both glucose intolerance and diabetes mellitus among patients with SYS compared with PWS is also observed. The endocrine dysfunction presented by the current study patient as central hypothyroidism and growth hormone deficiency is not described yet. Other findings such as hyperprolactinemia and elevation of ACTH with normal cortisol at present are uncertain.

An important contribution of MAGEL2 is suggested in the pathogenesis of hypothalamic dysfunction (14). MAGEL2 is most highly expressed in the hypothalamus, which includes suprachiasmatic, arcuate, and ventromedial nuclei. Tennese et al. (15) proposed that MAGEL2 deficiency in PWS caused hypothalamic phenotypes through a mechanism that overlapped with congenital leptin resistance. In addition, the loss of other PWS genes, including SNORD116 and NDN, may also contribute to hypothalamic dysfunction and developmental failure, high levels of ghrelin, neonatal respiratory deficiency, pain insensitivity, pituitary abnormalities, and developmental delay commonly found in PWS, but not in individuals with mutations in the leptin receptor. In general, MAGEL2-null mice exhibit a higher ratio of fat to lean mass, low IGF-I levels considering their increase in fat mass, and in females, a reduced response in a GH stimulation assay, all of which are suggestive of a growth hormone deficiency of hypothalamic origin.

The rhGH therapy has multiple beneficial effects on growth and body composition, motor and mental development in patients with PWS. The rhGH should be considered for patients with genetically confirmed PWS along with dietary, environmental, and lifestyle measures (13, 16, 17). The clinical and molecular similarities between both entities could also recommend the use of GH in SYS. Although the Abernethy malformation is associated with some genetic syndromes, it is not uncommon to be a casual finding in symptomatic patients with portal hypertension or porto-systemic encephalopathy, but these conditions rarely occur until the patient grows up. Due to the novelty of this syndrome and the phenotype-genotype variety presented by patients with mutation in MAGEL2 gene, it is of utmost importance to improve the clinical data of such patients.

The lack of a correct diagnosis can worsen the prognosis and limit the treatment of such individuals due to endocrine-metabolic malfunction associated with PWS. Therefore, accurate genetic studies are needed to differentiate both entities. The challenge for clinicians is to differentiate both entities clinically, and also provide conclusive genetic explanations for such phenotypes to provide appropriate genetic counseling and treatment. Similarly, as in patients with PWS, an early diagnosis and systematic follow-up of patients with SYS, regarding the possible endocrine and behavioral manifestations it can present, can lead to a significant improvement in prognosis and quality of life of children and adolescents with SYS.

Copyright © 2018, International Journal of Endocrinology and Metabolism. This is an open-access article distributed under the terms of the Creative Commons Attribution-NonCommercial 4.0 International License (http://creativecommons.org/licenses/by-nc/4.0/) which permits copy and redistribute the material just in noncommercial usages, provided the original work is properly cited
download pdf 102.63 KB Abstract XML Get Permission (article level) Import into EndNote Import into BibTex
Number of Comments: 0