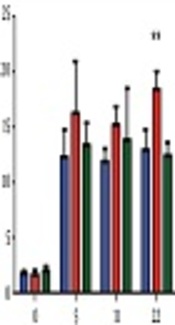 Vitamin D affects the pancreatic beta cell function and in vitro studies have shown that vitamin D may influence insulin secretion, apoptosis, and gene regulation. However, the outcomes have differed and there has been uncertainty regarding the effect of different vitamin D metabolites on insulin secretion.

The study was conducted in INS1E cells, an established insulinoma cell line from rat. The cells were divided into three groups; a control group, a group with 1,25(OH)2 vitamin D enriched medium (10 nM), and a group with 25(OH) vitamin D (10 nM) supplemented medium. After 72 hours of treatment, the cells underwent glucose stimulation at different concentrations (0, 5, 11, and 22 mM) for 60 minutes.

Diabetes is one of the most prevalent endocrine diseases worldwide, and the number of people with diabetes has more than doubled over the past 30 years (1). Diabetes is characterized by beta cell dysfunction and absolute or relative insulin deficiency due to both genetic and environmental causes (2-6), however, the exact pathophysiological mechanism is still not known. Genome wide association studies have described around 250 gene regions predisposing to type 2 diabetes (7), of which more than 90% are genes related to beta cell function (8, 9). Knowledge of beta cell function is therefore of great importance in understanding diabetes pathophysiology. Insulin secretion is tightly regulated by glucose, however, other nutrients and hormones also affect insulin secretion, including vitamin D (10). Vitamin D is primarily known for its vital role in calcium homeostasis, however, many extra-skeletal effects of vitamin D have become apparent the last years, including effects on beta cells (11). Vitamin D is synthesized endogenously in the skin by UV exposure or derived from foods and supplements. The major form of vitamin D in the circulation is 25(OH) vitamin D, which is metabolized primarily in the kidneys by 1-alpha-hydroxylase to generate the active form of vitamin D, 1,25(OH)2 vitamin D. 1-alpha-hydroxylase is also expressed in several extra-renal tissues in humans including skin, gastrointestinal tract, placenta, and in the pancreatic beta cells (12, 13). This enables local production of 1,25(OH)2 vitamin D and permits intracellular regulation of vitamin D levels, also in beta cells (12, 14). 1,25(OH)2 vitamin D performs the majority of its effects through regulation of gene expression in different tissues and cells through binding to the nuclear vitamin D receptor (VDR), which acts as a transcription factor (15).

We used the well-established rat insulinoma cell line INS1E and treated the cells with 25(OH) vitamin D and 1,25(OH)2 vitamin D prior to glucose stimulation. INS1E is a transformed cell line from rat insulinoma often used as a model for studies of beta cell function and presents an improved cell line compared to INS1. Studies have shown stable growth of INS1E cells over two years in culture and physiological insulin response to glucose, in contrast to INS1 cells (21).

The cell-line was a kind gift from professor Wollheim (21). INS1E cells were grown adherently in RPMI medium (Gibco by Life Technologies, Paisley, UK) with supplements (FBS 10%, Na-pyruvate 0.01 M, HEPES 0.1 µM, penicillin/streptomycin 10 mL and 2-mercaptoetanol 300 µL per 30 mL RPMI) in a humidified atmosphere at 37°C with 5% CO2. RPMI was changed two to three times per week and cells sub-cultured to 80% confluence. INS1E cells were grown for four weeks until stable log phase growth. Cells (105 per well in 12-well plates) were seeded in RPMI with supplements. We performed three parallel studies with triplicates.

3.2. Stimulation with Glucose After Pre-Treatment with Vitamin D Metabolites

After four passages, INS1E cells were incubated with RPMI with 10 nM 25(OH) vitamin D (Sigma-Aldrich, Netherlands), RPMI with 10 nM 1,25(OH)2 vitamin D (Sigma-Aldrich, Israel), or RPMI alone (control cells). The applied concentrations of 25(OH) vitamin D and 1,25(OH)2 vitamin D were chosen based on results from previous studies (18, 22). Vitamin D was dissolved in ethanol before the given amount was added to the medium. The RPMI, with supplements and vitamin D was replenished once during the 72 hours of preincubation. After 72 hours of preincubation, glucose stimulation was carried out. After gentle removal of RPMI, the cells were incubated with glucose-free Krebs-Ringer buffer for 60 minutes. Cells were subjected to stimulation with (1) Krebs-Ringer buffer or Krebs-Ringer buffer supplemented with (2) 5 mM glucose, (3) 11 mM glucose, or (4) 22 mM glucose in triplicates for 60 minutes. After stimulation, the medium was collected immediately to stop the incubation and centrifuged at 2000 g for 10 minutes. The supernatant was kept at -18°C prior to insulin measurement. The cells were collected by gentle mechanical release, resuspended until homogenous, and counted in an automated cell-counter (Countess, BioRad). The experiment was performed three times over a period of four weeks. The average cell numbers for each experiment are shown in Table 1.

Insulin was measured by a RIA kit (Millipore, Missouri, U.S.A.), according to manufacturer’s protocol.

None of the parallels were excluded in the calculations. The cells not stimulated with vitamin D metabolites were considered as reference cells in each group. All data were expressed as mean ± SD and analysed using IBM SPSS 23.0. To calculate P values, a two-tailed student t test was applied. P values below 0.05 were regarded as statistically significant. The INS1E cells treated with 1,25(OH)2 vitamin D showed a trend towards increased insulin secretion at all glucose concentrations. At 5 mM glucose, there was a 32% increase in the amount of insulin secreted compared to control cells. At 11 mM glucose, a 28% increase was observed. No significant changes were detected when comparing control cells with those pre-treated with 25(OH) vitamin D for any glucose concentrations.

In 2015, Jeddi et al., reported that preincubation of rat islets for 24 or 48 hours with 1,25(OH)2 vitamin D increased glucose stimulated insulin secretion at high levels of glucose (16.7 mM), however, no effects on insulin secretion at low glucose levels were found (19).

Contrary to our results, Wolden-Kirk et al., reported no significant changes in insulin secretion after treatment with 1,25(OH)2 vitamin D on mice islets (18). In this study, preincubation with active vitamin D lasted for 24 hours and the glucose levels were either 3 mM or 30 mM. It might be possible that the difference in length of preincubation with vitamin D, the chosen glucose concentrations, and the use of mice islets in this experiment led to the observed differences between their study and ours.

The mechanisms of the effects of vitamin D on glucose stimulated insulin secretion in beta cells are not completely understood and both direct and indirect mechanisms have been suggested. Bourlon et al., demonstrated in their study that 1,25(OH)2 vitamin D could activate the de novo biosynthesis of insulin in rat islets and suggested this could be caused by increased rate of conversion of proinsulin to insulin (25). They also showed that vitamin D required 48 hours in culture to increase insulin secretion from beta cells, which could indicate a genomic effect of vitamin D in beta cells (25). Another study from Bourlon et al. (26), showed that 1,25(OH)2 vitamin D might have a modulatory role on insulin release from beta cells via the cyclic AMP pathway in rat, suggesting also non-genomic effects of vitamin D on insulin release. Vitamin D may stimulate a second messenger system that includes phospholipase C and G-protein receptors, which leads to increased calcium influx and increased intracellular glucose within the beta cells, causing insulin secretion (27). In addition, simulation of vitamin D receptor by 1,25(OH)2 vitamin D might diminish the dedifferentiation in beta cells seen in type 2 diabetes (10).

INS1E cells are widely used as a model for pancreatic beta cells due to their stability in culture and their well-preserved glucose-induced insulin secretion within the physiological range (21, 28). However, it must be taken into consideration that the origin is a transformed cell line from the rat and will differ from islets regarding both function and mechanisms. INS1E cells lack the surrounding alpha and delta cells that normally reside in the pancreas. These are very important for the function of the beta cells and thus, for the secretion of insulin (29). Another limitation of the study is that the cells were preincubated with only 10 nM vitamin D metabolites. Future studies could possibly elucidate whether prolonged treatment of 1,25(OH)2 vitamin D, at even lower concentrations, would also increase glucose stimulated insulin secretion.

Vitamin D could potentially influence the number of INS1E cells in culture by increasing mitosis (30) or the apoptotic rate (31) and thereby, modify insulin secretion solely due to cell numbers. In order to avoid this bias, the cells were counted before and after treatment with vitamin D metabolites. The cell numbers remained stable throughout the study. A modest reduction of cell numbers was seen in the treated cells compared to the control cells.

Copyright © 2019, International Journal of Endocrinology and Metabolism. This is an open-access article distributed under the terms of the Creative Commons Attribution-NonCommercial 4.0 International License (http://creativecommons.org/licenses/by-nc/4.0/) which permits copy and redistribute the material just in noncommercial usages, provided the original work is properly cited.
download pdf 249.86 KB Abstract XML Get Permission (article level) Import into EndNote Import into BibTex
Number of Comments: 0