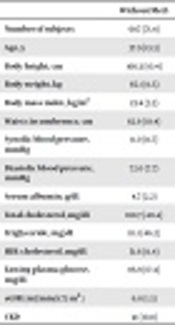 We aimed to determine the association of MetS and the number of metabolic syndrome components with the risk of CKD in the Iranian population in southern Iran.

A total of 819 subjects aged 18 - 88 years were enrolled using weight-based random cluster sampling. We constructed a logistic regression model to determine the adjusted odds ratios (ORs) and 95% confidence intervals (CI) of the association of MetS individual components and the number of these components with CKD.

Our study indicated a strong association between CKD and MetS in the Iranian population. It is also suggested that individuals with metabolic risk factors should be detected earlier; they should also undergo multidisciplinary interventions to hinder worsening of the individual components of MetS and development of CKD.

Chronic kidney disease (CKD) is a growing public health problem associated with age-related renal function failure (1). Today, the most common causes of CKD are obesity, diabetes and hypertension, all of which are components of the metabolic syndrome (MetS) and risk factors for cardiovascular diseases (2). MetS is a cluster of medical conditions consisting of abdominal obesity, hypertension, dyslipidemia and impaired glucose metabolism (3). While the association of each component of the MetS with the development or progression of CKD has been established, there is substantial discrepancy as to whether MetS is a novel risk factor for CKD (4).

CKD is more likely to develop in patients with MetS, and the risk of CKD increases with the number of MetS components (4). However, it remains unclear whether the clustering of these components can predict the risk of CKD. On the other hand, studies differ in the arrangement of MetS components, which is a stronger predictor of CKD (5). The clinical effects of MetS on the prediction of CKD vary among ethnic groups (6), and understanding metabolic risk factors and predictive values of each component affecting the relationship between CKD and MetS is essential in different ethnic populations.

In this study, we sought to explore the association of MetS with this condition and weigh the probabilities of the MetS components as an additional factor to capture the risk factors for CKD in the Iranian population in southern Iran.

This study was conducted in Shiraz, a main urban area in south of Iran, from November 2013 to September 2014. The study involved a randomly selected community sample of the general population in Shiraz. Multistage weight-based random cluster sampling was used based on home addresses and postal zip codes to draw the samples from all the seven municipality districts of Shiraz city. People aged 18 years and older from the randomly selected addresses were interviewed. Foreign residents, pregnant women or those who had history of delivery in the past six months were excluded. The research protocol was approved by the institutional review board and the Ethics Committee of Shiraz University of Medical Sciences. Written informed consents were obtained from all the participants before entering the study.

Demographic characteristics and medical history such as diabetes mellitus, hypertension, and history of cardiovascular or kidney diseases were recorded. A physician and two nurses performed the physical examinations.

The sample size was calculated according to previous studies and using the following formula:

Therefore, the standard sample size was calculated at 800 subjects.

Height and weight were measured by two experienced nurses using calibrated standard scales with participants dressed in light clothing and barefooted. Body mass index (BMI) was obtained by dividing weight in kilograms by the square of height in meters. Waist circumference was measured at the level midway between the 12th rib and the iliac crest using a measuring tape. Blood pressure was recorded in mmHg with a mercury device according to the standardized protocol (9).

After overnight fasting, 10-mL blood samples were taken and centrifuged within 30 minutes of collection and stored at -20°C until further analysis. Blood glucose was measured using a spectrophotometer. Serum total cholesterol, high-density lipoprotein cholesterol (HDL-C) and total glycerol (TG) concentrations were assessed by enzymatic reagents (Biosystems, Barcelona, Spain) with an A-25 BiosystemAutoanalyser. Friedewald equation was used to estimate the low-density lipoprotein (LDL) concentration indirectly from the measured levels of TG, HDL-C and total cholesterol. The intra- and inter-assay coefficients of variation were 0.8% and 3.1% for TC, 0.9% and 2.1% for TG and 2.1% and 3.4% for HDL-C, respectively. Serum creatinine was measured with Jaffe's kinetic method. Intra- and inter-assay coefficients of variation were 2.4% and 3.1%, respectively.

Table 1. Clinical and Biochemical Characteristics of the Study Subjects Stratified by Gendera,b

a Values are expressed as mean (SD) unless otherwise indicated.

b Metabolic syndrome was defined according to IDF guidelines.

Table 3. Clinical Characteristics of Those with and Without Metabolic Syndromea

a Values are expressed as mean(SD) unless otherwise indicated.

The study showed an age-dependent increase in the prevalence of CKD (16.6%). The prevalence of CKD increased progressively with the number of MetS components from 8.5% of the subjects with no MetS components to 30.6% in subjects with three or more of the components. Each trait of MetS was associated with a high OR of CKD, with the exception of low HDL and high blood glucose. OR was higher for individuals with hypertension and central obesity.

The overall prevalence of MetS observed in our study was lower than that reported in the United States (33%) (15). This discrepancy might be in part due to the differences in methods, population characteristics, age ranges and criteria used to define MetS among various studies. The frequency of individual components of MetS differed between various populations and ethnic groups (16). It is, therefore, necessary to assess the components of MetS to determine the pathogenesis of MetS in different countries.

In our study, abdominal obesity (63.6%) was the most common risk factor followed by low HDL-C (36.7%), high triglyceride level (31.7%), hypertension (25.6%) and high fasting blood sugar (21.9%). The most common component of MetS in the USA was obesity (84%) followed by hypertension (76%), low HDL-C (75%), high triglycerides (74%) and high glucose (41%) levels. Abdominal obesity was observed most frequently in individuals with MetS in our study, which is similar to the findings of a research performed in the United States (17).

To the best of our knowledge, this is the first study assessing the associations of individual MetS components, the presence of MetS and the number of MetS components with CKD among the Iranian population in southern Iran. The findings illustrated significant relationships between MetS, the presence of individual MetS components and the number of MetS components and CKD, independent of age or gender. MetS was found to be independently associated with an increased risk of CKD in population-based cohorts and cross-sectional studies (18). The prevalence of MetS in CKD patients was 30.2%; this result is consistent with those of prior studies that showed a high prevalence of MetS and significant association between MetS and CKD in individuals with CKD (19). In a study conducted in Southeastern Asia, the prevalence of MetS in advanced CKD patients was found to be 37.5% (20). Meta-analysis of MetS prevalence in patients with CKD showed that MetS was a significant determinant of CKD (4). Previous studies have linked each of the components of the MetS with an increased risk of CKD. However, these studies have yielded inconsistent results as to the association between MetS-related traits and the risk of CKD (21).

In multivariate methods with respect to age and sex, the results of our study illustrated that all the traits of MetS, except for low HDL and high blood glucose levels, were associated with CKD. Our finding was consistent with those of Landecho demonstrating no significant association between low HDL and CKD (25). Although it has been illustrated that low level of HDL is a risk factor for decline in GFR, low HDL-C (under 30 mg/dL) was associated with increased risk of the incidence of eGFR under 60 mL/min/1.73 m2. Moreover, the association of low HDL-C with the presence of CKD and microalbuminuria has not been ascertained (26).

This study showed that high blood glucose was significantly associated with CKD in univariate analysis. High blood glucose is closely related to age because the prevalence of diabetes increases with advancing age (27). In multivariable analysis, we further adjusted age and sex and found that the significance did not persist, indicating that the association between blood glucose and CKD was dependent on age. We confirmed the prevalence of CKD among individuals with MetS among the general Iranian population with a new and more validated CKD-EPI equation used for the first time in the Iranian population and provided new and important information regarding the relationship between MetS traits and the risk of CKD.

These findings warrant greater attention to policies and interventions, such as lifestyle modifications, intended to reduce the prevalence of MetS and its adverse outcomes. In this study, MetS according to the International Diabetes Federation (IDF) definition is associated with an increased risk of CKD. The Iranian National Committee of Obesity (INCO) has proposed revised criteria for MetS with three abnormal findings among five with the same variables of IDF criteria and cutoff points, except waist with regional cutoff value of waist circumference > 95 cm for men and women (28). Despite the similarity of IDF and INCO criteria, further studies using INCO criteria are needed to better understand the association of MetS and its various components with CKD in the Iranian population.

Our study had some limitations that are worth mentioning. First, as this was a cross-sectional study, it does not indicate any causality. Further prospective studies are required to confirm the associations and to investigate the potential impact of prevention and individual treatment programs for each MetS trait on MetS occurrence and progression of CKD in the Iranian population. Second, the level of kidney function was measured by estimated creatinine-based equation instead of measuring GFR directly.

In conclusion, the findings of our population-based study showed a high prevalence of MetS in southern Iran. The trend of gender vulnerability was towards the female sub-population. Our study illustrated MetS and its individual components, except for low level of HDL and high blood glucose, as strong and independent risk factor for CKD. There was a graded relationship between the number of MetS components and the risk of CKD.

Copyright © 2019, International Journal of Endocrinology and Metabolism. This is an open-access article distributed under the terms of the Creative Commons Attribution-NonCommercial 4.0 International License (http://creativecommons.org/licenses/by-nc/4.0/) which permits copy and redistribute the material just in noncommercial usages, provided the original work is properly cited.
download pdf 198.77 KB Get Permission (article level) Import into EndNote Import into BibTex
Number of Comments: 0