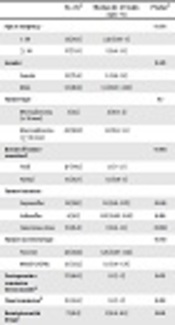 Acromegaly is a rare disorder resulting from benign growth hormone (GH)-secreting pituitary adenomas in 90% of the cases. In recent years, many researchers have studied the Ki-67 index level of pituitary tumors and its relationship with demographics, biochemical parameters, clinical behavior, and recurrence rate.

This study aimed to evaluate the correlation of Ki-67 index level with clinicoradiological and endocrinological parameters in confirmed GH-secreting pituitary adenomas, as well as with the surgical response and medical treatment after surgery.

We collected the medical and pathologic records of 49 patients with GH-secreting pituitary adenoma who underwent surgeries from 2008 to 2017 in Shariati hospital affiliated to Tehran University of Medical Sciences.

According to MRI reports, 94% of the tumors were macroadenomas. The MRI findings also revealed the median maximal adenoma diameter of 18.5 mm. About 40% of the patients achieved remission three months after the surgery. Younger patients had a significantly higher Ki-67 index level (P = 0.036). We did not observe any significant difference in the Ki-67 index level regarding gender, tumor type, maximal tumor diameter, tumor invasiveness, tumor secretory type, and remission. Interestingly, the Ki-67 index level was negatively correlated with the insulin-like growth factor-1 (IGF-1) level at the last follow-up (P = 0.02). In logistic regression analysis, patients with higher preoperative GH serum levels had a better outcome.

Acromegaly is an uncommon condition characterized by the hypersecretion of growth hormone (GH) and consequently, the elevated levels of insulin-like growth factor 1 (IGF-I). Over 90% of patients with acromegaly have a benign GH-secreting pituitary adenoma (1, 2).

Surgical resection is the first-line option for treating the adenomas, with the remission rate of 85% for microadenomas and 40% - 50% for macroadenomas at experienced centers (3). In case of surgical treatment failure, the accepted second-line therapy includes medical therapy with somatostatin analogs (SSA), GH receptor antagonists, and/or dopamine agonists (DAs) such as Cabergoline (4, 5). However, the recent literature indicates that biochemical control is achieved in < 40% of patients treated with SSA therapy (6, 7). Hence, due to inconsistent responses to surgical resection and postoperative medical therapy, investigators are seeking for probable parameters that could be helpful in predicting the clinical outcome.

In recent years, some researchers have studied the Ki-67 index level of pituitary tumors and its relationship with demographics, biochemical parameters, clinical behavior, and recurrence, without any discrepancy in the function of the tumor (11-13). However, a dearth of research exists for such a correlation in GH-producing adenomas (14-17).

The aim of this study was to evaluate the correlation of Ki-67 index level with clinicoradiological and endocrinological parameters in confirmed GH-producing adenomas, as well as with surgical response and medical treatment after surgery.

We retrospectively studied the medical records of 49 patients with GH-secreting pituitary adenoma who underwent surgical resection by three experienced neurosurgeons between 2008 and 2017 in Shariati hospital affiliated to Tehran University of Medical Sciences. This period was chosen because of access to pathology reports. The records were assessed to obtain their clinical, biochemical, radiologic, and pathologic data. The study was performed in accordance with the Declaration of Helsinki.

Acromegaly had been diagnosed based on clinical manifestations. The pituitary adenoma was detected by magnetic resonance imaging (MRI). The biochemical elevation of GH and IGF-1 levels and the lack of GH suppression were determined following the oral glucose suppression test (OGTT), which was conﬁrmed on pathological investigations by an experienced pathologist.

Preoperative GH and IGF-1 concentrations were measured by the enzyme-linked immunosorbent assay (ELISA) (Monobind Inc. USA) at the Hormone Laboratory of Shariati hospital and the results were expressed as ng/mL.

The patients' preoperative, three months postoperatively, and the latest available GH and IGF-1 serum levels were registered. The tumors were categorized in MRI studies according to their size as either microadenomas (< 10 mm) or macroadenomas (≥ 10 mm), and their expansion to extrasellar structures was determined. Partial tumor removal was deﬁned as tumor remnant at surgery and/or at MRI imaging three months postoperatively (18). According to the most recent acromegaly guidelines (19, 20), the criteria for remission were deﬁned as the normalization of IGF-I levels, adjusted to age and gender, and GH levels below 1 ng/mL.

Since the GH receptor antagonist (Pegvisomant) was not available in Iran, patients whose diseases were persistent after surgery underwent medical therapy with SSA and/or DAs. Surgically removed specimens were fixed in formalin and then embedded in paraffin. All tissue specimens were examined for anterior pituitary hormones (GH, PRL, ACTH, TSH, FSH, and LH). The Ki-67 antigen was measured using the MIB-1 antibody.

Based on the MRI reports, the median maximal adenoma diameter was 18.5 mm (IQR: 14.5 - 28.2) and macroadenomas accounted for 94% of the tumors. Unfortunately, we had no access to the follow-up data of eight patients at three months (or later) post-surgery. Among the remaining 41 patients, 31 (75.6%) had both biochemical and MRI follow-up data and 10 (24.4%) had only biochemical follow-up data at three months post-surgery. Sixteen (39%) patients achieved early remission three months after surgery based on the biochemical and/or MRI results. From among 25 patients who did not achieve remission three months after surgery, three subjects (one with SSA therapy post-surgery) met the criteria of remission in their final evaluations. Further follow-ups were available for 33 patients in the period ranging from three months to 10 years (median follow-up: 48.5 months, IQR: 13.25 - 67.25). Among these patients, 29 (87.9%) had both biochemical and MRI follow-up data and four (12.1%) had only biochemical follow-up data. The overall rate of final remission was 45.5% (15 out of 33). There were 13 postoperative complications, including eight cases of diabetes insipidus (DI), four cases with CSF leakages, and one patient with meningitis. Two patients died during the follow-up period because of septic shock and unknown origin.

There were 25 (59.5%) patients with remnant/recurrent disease based on their MRI and/or biochemical data at three-six months post-surgery. Interestingly, none of the adenomas with a Ki-67 index level of > 3% expanded cavernous sinus. Sixteen patients (37.2%) started SSA therapy after surgery, among whom 13 (81.25%) also received DAs.

4.2. Relationship Between Ki-67 and Demographics, Radiologic Data, and Outcome

There was not any significant difference in the Ki-67 index level with respect to gender, tumor type, maximal tumor diameter, tumor invasiveness, tumor secretory type, and remission (Table 1).

Table 1. Relationship of the Ki-67 Index with Demographics, Presurgical Data, and Outcomes in the Study Population

a Number of patients.

In multivariable logistic regression analysis, the higher preoperative GH serum level was a significant predictor of three-month remission and final remission (odds ratios of 0.88 and 0.93, respectively). The Ki-67 index was not related to short and long-term remission. (Tables 2 and 3)

a Data were available for 41 patients and criteria for remission were deﬁned as the normalization of IGF-I levels, adjusted to age and gender, and GH level < 1 ng/mL.

a Data were available for 33 patients and criteria for remission were deﬁned as the normalization of IGF-I levels, adjusted to age and gender, and GH level < 1 ng/mL.

This study revealed that the Ki-67 index level was significantly higher in younger adults while previous studies failed to demonstrate such a significant association (15, 16).

In this study, the Ki-67 index level was not correlated with pre- or post-operative GH and IGF-I plasma levels, which is consistent with the studies by Fusco et al. (15) and Sarkar et al. (17).

In this study, the Ki-67 index level was independent of tumor size. Previous studies have often failed to found such a relationship (15-17). Jaffrain-Rea et al. (24), in a large prospective survey of 132 pituitary tumors including 42 GH-secreting adenomas, also did not find any correlation between the adenoma size and the Ki-67 level index, particularly for GH-adenomas.

Over the years, researchers have been seeking pathologic factors to predict the invasiveness of tumors. Cavernous sinus invasion is common in GH-secreting pituitary adenomas (25). Some previous studies have revealed a significant relationship between higher Ki-67 index level and tumor invasiveness. In a study by Fusco et al. (15), 68 acromegalic patients were recruited and followed. It was observed that tumors with cavernous sinus invasion had a higher mean level of Ki-67 index. This finding was confirmed by a number of studies (16, 24, 26); however, other studies (17) including ours did not observe such a correlation. Botelho et al. (27) investigated the presence of tumor markers (p53, Ki-67, and c-erb B2) in 38 patients with GH and/or prolactin-secreting adenomas. According to their results, c-erb B2 was a better predictor of tumor invasiveness.

A number of studies evaluated the probable predictors of surgery outcome in patients with acromegaly, some of which reporting invasion to surrounding structures especially cavernous sinus (28-30), gender (29), older age (16, 31), tumor size (28), and lower preoperative serum GH (28, 31, 32) and IGF-1 (31) as the predictors of surgical remission. In a recent study by Antunes et al. (30), 69 acromegalic patients were recruited. They investigated if some tumor characteristics such as the Ki-67 index level are the predictors of outcome. They found that only was the presence of cavernous sinus invasion a predictor of disease persistence.

Probable reasons for the discrepancy between these results may be the small sample sizes and retrospective design of the studies. Hence, it is very necessary to establish prospective complementary multidisciplinary approaches in large series of GH-adenomas to achieve more consensus results.

This was a single center retrospective study with relatively small sample size; this might have caused a failure to obtain significant results, as well as to follow up all patients for the long-term. Moreover, no data were available on the agreement of the two radiologists respecting MRI reports. We also had limited access to other biomarkers such as p53, p21, sparsely/densely granulated somatotroph adenoma, etc., which have been mentioned in several studies.

We found little evidence to ascertain the association of a tumor marker with some tumor behaviors and outcomes. However, the existing data on such an association are not congruent. The only significant correlation appeared to be between younger age and higher Ki-67 level index. Further research is required to find further biomarkers to use for predicting GH- adenomas behavior and treatment outcome.

Copyright © 2019, International Journal of Endocrinology and Metabolism. This is an open-access article distributed under the terms of the Creative Commons Attribution-NonCommercial 4.0 International License (http://creativecommons.org/licenses/by-nc/4.0/) which permits copy and redistribute the material just in noncommercial usages, provided the original work is properly cited.
download pdf 124.34 KB Get Permission (article level) Import into EndNote Import into BibTex
Number of Comments: 0