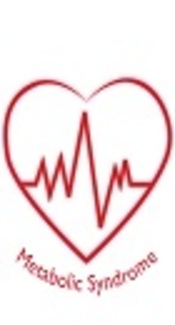 Health-Related Quality of Life in Tehran Lipid and Glucose Study

Beyond the objective outcomes of metabolic syndrome (MetS), the association between this syndrome and its patient-centered outcomes need to be investigated in Middle-Eastern countries. This report aims to summarize the Tehran lipid and glucose study (TLGS) findings regarding the association between MetS and health-related quality of life (HRQoL) and its influential factors through the past decade.

The current review has been conducted on the TLGS published data regarding different aspects of the association between MetS and HRQoL in adult participants through the last decade. To assess HRQoL, the Iranian version of short form health survey (SF-36) was used. To define MetS the most commonly used insulin resistance (IR)-and waist circumference (WC) - based MetS definitions have been applied in the publications reviewed.

As a whole, MetS was a determinant of poor physical HRQoL only in women (OR: 1.78; 95% CI: 1.21 - 2.61), particularly in those with more component of MetS (P < 0.001). Results further showed that only reproductive aged women with MetS were more likely to report poor PCS compared to those without MetS even after adjusting for age (OR: 1.7, 95% CI: 1.0 - 3.0; P < 0.05). Different structures of MetS and physical HRQoL constructs in men and women as well as age and smoking with significant gender-specific effects on mental HRQoL were factors responsible for the gender specific pattern observed. Considering the duration of MetS, only women with intermittent MetS indicated higher risk for reporting poor PCS (OR: 2.75, 95% CI: 1.19 - 6.37; P < 0.001) compared to those without MetS. The observed sex-specific pattern used to detect poor HRQoL in those with MetS was confirmed by all WC-based definitions except for the American Heart Association/National Heart, Lung, and Blood Institute (AHA/NHLBI) definition. However, none of IR-based definitions could detect poor physical and mental HRQoL in either gender.

In summary, in the TLGS population, the association between MetS and HRQoL followed a sex specific pattern, mainly significant only in women and in the physical aspect.

The metabolic syndrome (MetS), as a complex of metabolic abnormalities could directly increase the risk of cardiovascular diseases (CVDs) and diabetes type 2 (1, 2), with a prevalence fast increasing in different populations in both the developed and developing countries (3-7). Although national data on Iranian adults indicates a decreased prevalence of MetS from 35.9% in 2007 to 32.9% in 2011 (8), it is still a considered a major health problem in our population.

Considering the World Health Organization (WHO) definition of health (9) and revolution in the medical framework of prevention and treatment of non-communicable diseases (10, 11), improving health care and health-related quality of life (HRQoL) has become the ultimate goal of health promotion programs, beyond increasing the individuals’ life expectancy (12, 13). As a patient-centered outcome, HRQoL refers to individuals’ own perceptions of their health status and life satisfaction (13, 14). Beyond the objective outcomes of MetS such as mortality and clinical functions, the negative association between MetS and HRQoL has been investigated in other countries (15-18). Among the first efforts in this field the negative association between MetS and physical or mental HRQoL have been reported mainly in Western societies, including an obese Italian population (19), an elderly Brazilian community (20) and postmenopausal Ecuadorian women (21). Considering the fact that, quality of life takes on different meanings based on the area and culture of population, there was a need to investigate the association between MetS and HRQoL in non-Western countries. To the best of our knowledge, findings of the TLGS provide the first evidence regarding this relationship in an urban Middle Eastern population (22). In this report, a summary of the TLGS findings regarding the association between MetS and HRQoL and its influential factors has been provided.

TLGS data collected between 2005 - 2007, was used to assess different aspects of the associations between MetS and HRQoL. Participants were adults aged ≥ 20 y, who were diagnosed without diabetes type 2 and had complete socio-demographic, clinical and HRQoL data (Figure 1). To assess HRQoL, we used the Iranian version of the short form health survey (SF-36), which has been validated in Iran (23); this widely used questionnaire contains 36 questions summarized into eight subscales, i.e four physical health related subscales including physical functioning, role limitations due to physical health problems, bodily pain, general health and four mental health-related subscales including vitality, social functioning, role limitations due to emotional problems, and mental health. The physical subscales constitute: (1) the physical component summary (PCS) and (2) the four mental subscales are termed as the mental component summary (MCS) (24). The score attributed to each subscale ranges from 0 to 100 as the worst and the best conditions of health respectively. Calculation of the PCS and MCS scores was done using the Quality Metric Health Outcomes Scoring software (25). The most common MetS definitions applied in the TLGS reports have been categorized in two, the insulin resistance-based- (26-28) and the waist circumference-based definitions (29-32).

Mean age of participants was 46.5 ± 14.4 years and 64.3% of participants were female. There were significant differences in demographic and clinical characteristics between individuals with and without metabolic syndrome in both genders, except for fasting blood sugar, physical activity and smoking for women and except educational level, fasting blood sugar, physical activity and smoking and medication users in men. The findings of the association between MetS and HRQoL are presented in three main themes including: (1) the effect of gender, (2) the nature and duration of MetS and (3) the effect of definitions and measurements.

At first glance, comparing HRQoL between those with (n = 361) and without MetS (n = 589), our results showed significant differences in all HRQoL domains except for the vitality (P = 0.1) and role emotional (P = 0.06) sub-scales. After adjustment, these differences were observed only in women and not in men in all subscales (P < 0.05), except for role physical, vitality, social functioning, role emotional and MCS (Figure 2). In this regard a sex specific logistic analysis revealed MetS as a determinant of poor physical HRQoL only in women (OR: 1.78; 95% CI: 1.21 - 2.61). In addition in women, with increase in the number of Met.S components a significant decreasing trend in the PCS was observed (P < 0.001) (22). 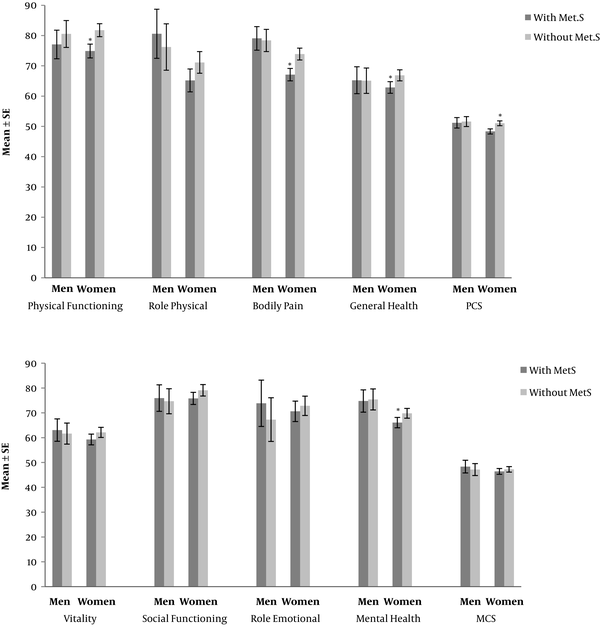 Previous findings of TLGS indicate that the impairment of HRQoL in those with MetS was observed mainly in women but not in men; therefore, potential influential factors responsible for gender differences in the association between MetS and HRQoL were further assessed. For this purpose, the structural equation modeling (SEM) approach was used, and findings indicated that the most physical subscales impaired by MetS in women were bodily pain and physical functioning. In addition, physical activity in both genders, age and education only in women and smoking only in men were factors directly associated with physical aspects of HRQoL. Marital status and physical activity in women and age in men were factors directly associated with mental aspects of HRQoL. Moreover, different structures of MetS and physical HRQoL constructs in men and women as well as age and smoking with significant gender-specific effects on mental HRQoL were factors responsible for gender specific pattern observed (21).

3.2. The Effect of Nature and Duration of MetS

Furthermore, the next question that arose in this regard was whether or not persistence of MetS has any influence on HRQoL. To answer this question, participants of the TLGS who had participated in all three phases of the study (n = 643) were categorized into four groups including (1) those without MetS in all three phases, (2) those with MetS in just one phase (transient) (3) those with MetS for two consecutive or intermittent phases (intermittent) and (4) those with MetS for all three phases and their HRQoL scores were then compared. The findings showed that after adjusting for confounding variables, the HRQoL scores in PCS, bodily pain and general health subscales differed significantly only in women of the mentioned study groups. However, for men, no significant differences were observed in HRQoL scores of four study groups. In the adjusted models, only women with intermittent MetS indicated higher risk for reporting poor PCS (OR: 2.75, 95% CI: 1.19 - 6.37; P < 0.001), compared to women without MetS. Whereas, men with transient, intermittent and persistent MetS did not show any difference in risk for reporting poor PCS and MCS, compared to men without MetS (33). 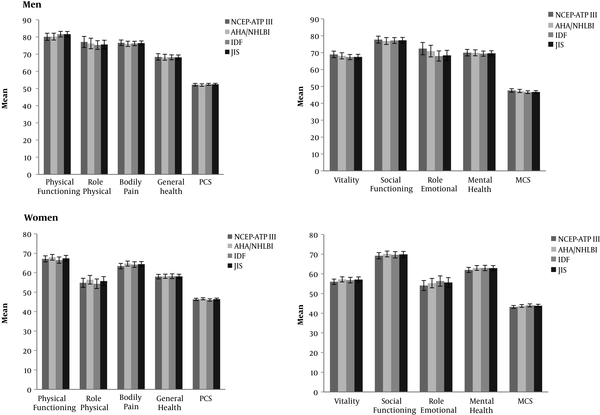 3.3. The Effect of Definitions and Measurements 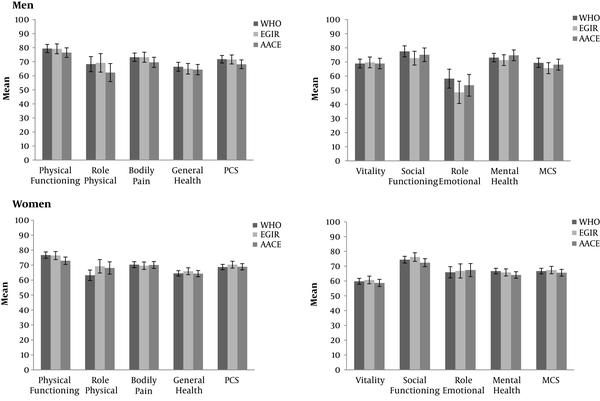 In summary, the current findings revealed that the association between MetS and HRQoL followed a sex specific pattern which was mainly significant only in women and in the physical aspect. Some of the gender difference observed in the association between MetS and HRQoL was due to differences in the structures of both MetS and the physical aspect of HRQoL in men and women and also, sex specific effects of age and smoking on mental aspect of HRQoL. Furthermore, the significant association between MetS and poor physical HRQoL in women, was limited to women of reproductive age. Gender difference in the association between MetS and HRQoL has also been reported in previous studies, some of which showed this association in women (15, 16) or in men (38). In addition, similar to TLGS findings, in some studies this relationship was significantly revealed only in the physical aspect (17, 39). However, other studies reported this association in mental (38) or both physical and mental aspects of HRQoL (40). Regarding the potential effects of duration and type of MetS components on the association between MetS and HRQoL, TLGS findings furthermore indicated that after considering both duration and presence of impaired glucose as an important component of MetS, the same gender specific pattern remained. In other words, irrespective of both duration of MetS and presence of impaired glucose regulation, this syndrome was still associated with poor physical HRQoL only in women. However, findings of another study in Finnish population, indicated that different glucose tolerance statuses were associated with impairment of HRQoL (35). In addition, in terms of using different definitions of MetS, findings indicated no significant gender differences in any of the applied WC-based and IR-based definitions of MetS in detection of poor physical and mental HRQoL. To the best of our knowledge, there is no similar study in this regard which has investigated the diagnostic value of different definitions of MetS in detection of poor HRQoL; based on our findings, while all WC-based MetS definitions detected poor physical HRQoL only in women with MetS, none of the IR-based MetS definitions could detect poor physical or mental HRQoL in either of genders.

The current review summarizes all TLGS findings regarding HRQoL which have been focused on MetS. This report could provide a comprehensive view regarding different aspects of the association between HRQoL and MetS in a Middle Eastern population. However, the cross-sectional nature of these studies, limits our ability to draw conclusions regarding the causal association between MetS and HRQoL. In addition not considering rural/sub-urban populations of Iran limits the generalizability of the current results. It is recommended that other possible confounders that could affect the present results, be considered in future research.

In the TLGS population, the association between MetS and HRQoL followed a sex specific pattern which was mainly significant only in women and in physical aspect. To confirm these findings further studies on different urban and rural populations in Iran seem essential.

The authors wish to acknowledge Ms Niloofar Shiva for critical editing of English grammar and syntax of the manuscript.

Copyright © 2018, International Journal of Endocrinology and Metabolism. This is an open-access article distributed under the terms of the Creative Commons Attribution-NonCommercial 4.0 International License (http://creativecommons.org/licenses/by-nc/4.0/) which permits copy and redistribute the material just in noncommercial usages, provided the original work is properly cited.
download pdf 145.57 KB Get Permission (article level) Import into EndNote Import into BibTex
Number of Comments: 0