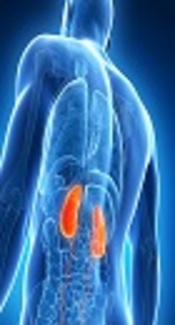 Nutrition and Diabetes, Cardiovascular and Chronic Kidney Diseases: Findings from 20 Years of the Tehran Lipid and Glucose Study

The high prevalence of chronic diseases can be prevented or managed by specific changes in lifestyle patterns of individuals of which dietary factors is emphasized. The objective of this study was to review all findings of the Tehran Lipid and Glucose Study regarding validity and reliability of food frequency questionnaire (FFQ), evaluating dietary quality and association of dietary factors in relation to diabetes, dysglycemia, cardiovascular (CVD) and chronic kidney disease (CKD).

Related documents were searched through PubMed and Scopus databases, in English language from 2000 to 2017. Finally, 52 relevant documents were eligible for inclusion in this review.

The FFQ proved to be an acceptable tool for assessing nutrient and food group intakes and rank individuals accurately according to the levels of their dietary intakes. After 8 years of follow-up, the western dietary pattern (DP) was fairly stable but there was instability of traditional Iranian DP. DPs of over two-thirds of Tehranian populations were not in accordance with the dietary recommendations. Higher dietary scores of variety and healthy DPs were also associated with reduced odds of dysglycemia. The main dietary factor related to increased risk of CVD in our population was western DP. Patterns of amino acid intakes may contribute to the development of CVD. Higher intakes of several micronutrients and macronutrients, DPs and some vegetables decrease the risk of CKD. In conclusion DPs of most Tehranian adults need improvement.

This review showed that higher adherence to healthy food choices was associated with reduced odds of dysglycemia and CVD. Dietary sources of renal-protective nutrients should be encouraged among the general population.

The high prevalence of chronic diseases such as type 2 diabetes (T2DM), cardiovascular (CVD) and chronic kidney disease (CKD) is becoming a major public health concern in most countries, although this can be avoided or managed by specific changes in lifestyle patterns of individuals (1). One such change is dietary factors; hence the accurate estimation of dietary intakes is crucial (2). To prevent inaccurate estimations of dietary intakes leading to incorrect data on the association between diet and disease, the reproducibility and validity of measurement tools is vital (3).

The importance of healthful dietary pattern (DP) has been emphasized using dietary guidelines and recommendations. The diet quality has been evaluated, by assessing adherence to dietary guidelines to identify inappropriate DPs, and implementing timely policy revisions and strategies (4, 5).

Dietary factors related to chronic disease may differ across populations because of cultural, social and genetic differences. In this regard limited and inconsistent data are available from developing countries (1). Recently the role of different DPs such as the Mediterranean diet (MD) (6) or dietary approach to stop hypertension (DASH) (7, 8), functional foods (9), nutraceuticals (10) and patterns of amino-acid intakes (11) has been emphasized in the prevention and management of cardio-metabolic diseases. On the other hand, in recent decades consumption of unhealthy foods like sugar sweetened beverages, fast foods, salty and sweet snacks, hydrogenated and animal fats has shown a fast increasing trend worldwide, which is associated with high incidence of chronic diseases (12, 13). The Tehran Lipid and Glucose Study (TLGS) is an ongoing study started in 1999 with a representative sample of 15005 individuals, aged ≥ 3 years, recruited from among residents of district no.13 of Tehran, the capital of Iran (14). This prospective study provides an opportunity to study different aspects of NCDs in this Middle-Eastern population.

The objective of this study was to review all findings of studies conducted within the framework of TLGS regarding the validity and reliability of the food frequency questionnaire (FFQ), used for evaluating dietary quality and association of dietary factors in relation to T2DM, dysglycemia, CVD and CKD to provide a deeper insight into these diseases in this population in order to design better preventive strategies for high risk individuals at high risk for these diseases.

In this review, related documents were searched in England language through PubMed, Scopus, and Embase databases, 2000 to 2017. To obtain studies focusing on reliability and validity of TLGS food frequency questionnaire, overall diet quality and nutritional behaviors of TLGS population, we used different combinations of “diet”, “nutrition”, “food frequency questionnaire”, “quality”, habit”, “validity”, and “reliability”. Following key words were used to search papers investigating potential relations between dietary factors and risk of cardio-renal diseases and diabetes: “diet”, “nutrition”, “cardiovascular”, “kidney disease” and “type 2 diabetes”. Finally, 52 relevant documents were eligible for inclusion in this review. Three papers focused on development of the TLGS, the FFQ, and its validity and reliability. Dietary habits and diet quality of TLGS population were described in 9 papers. The associations of dietary factors with the prevalence or incidence of CVD events, CKD, T2DM or dysglycemia were investigated in 6, 9 and 28 papers, respectively.

Moreover obtaining DPs yields a better perception of dietary habits and various combinations of foods consumed. Hence, the reliability and comparative validity of DPs using FFQ data shows precision and accuracy of extracted patterns; the stability shows the constancy of DPs when it may have changed. There was strong reliability between two FFQs and reasonable validity for the two extracted DPs; Iranian traditional and western DPs. After 8 years of follow-up, the western DP remained fairly stable whereas there was instability of Iranian traditional DP over the follow-up years (15). Hence this FFQ is an acceptable tool for determining DPs of Iranians to investigate the relationship of DPs with health outcomes in epidemiological studies.

Consumption of a wide number of foods and food groups (variety) was included as part of dietary recommendations. Mean dietary diversity score (DDS) was 6.25 ± 1.08 (ranged 0 - 10) in adolescents and had a positive correlation with mean adequacy ratio of nutrients (16). Mean DDS were 6.05 ± 1.02 and 6.01 ± 1.0 in men and women, respectively, both were associated with the nutrient adequacy (5, 17).

The mean ± SD score for dietary guidelines for American adherence index (DGAI) 2005 was 8.31 ± 1.9 (range 2.5 - 15.0); about two-thirds of participants achieved less than half of the possible scores of the DGAI (19). Compliance of the WHO/FAO nutrition targets for n-3 poly-unsaturated fatty acids (PUFAs), sodium, fruit and vegetable intakes was weak and the largest disparity with recommendation was seen for n-3 PUFAs (4).

Obese subjects had the highest rate of under-reporting of energy intake. The amounts of macro- and micro-nutrient intakes were lower in under-reporters compared to normal-reporters (22).

In a cross-sectional study of 581 healthy adults, mean FBG was significantly lower in those with the highest DDS quartile than in the lowest (86 ± 5 vs. 91 ± 5 mg/dL; P < 0.05). The odds of having FBG ≥ 110 mg/dL decreased significantly across quartiles of the DDS (Ptrend = 0.02) (29). Mean FPG and odds of having FPG ≥ 100 mg/dL significantly reduced across quartiles of the DGAI-2005 score (19). The effects of a weight reducing diet and DASH diet on metabolic components were compared on 116 adults with MetS in a randomized clinical trial. After 6 months adherence to the DASH diet, FPG decreased significantly in both men and women (30).

In two cross-sectional studies of adults, dietary fatty acid composition including intakes of SFA, oleic acids, linoleic acids (31), and PUFA either ω3 or ω6, and the ω6/ω3 ratio showed no significant associations with FPG and odds of having FPG ≥ 100 mg/dL (32). However, one cross-sectional study of 2750 adults, reported an inverse associations for FBG with total PUFA intake (β = -0.27) and with ratio of PUFA-to-SFA ratio (β = -0.05) (20). In a cross-sectional study of 2537 adults, FBG was positively associated with total protein intake (β = 0.06 in men and β = 0.11 in women, P < 0.05) and negatively associated with animal-to-plant protein ratio (β = -0.078 in men and β = -0.056 in women, P < 0.05) (33). Dietary total anti-oxidant capacity (TAC) was negatively associated with FBG after a 3-year follow-up of 1983 adults but odds of having FBG ≥ 100 mg/dL did not differ significantly across quartiles of TAC intakes (34). The odds of having FBG ≥ 110 mg/dL was significantly decreased across quartiles of flavonoid intakes (P < 0.005) and increased across quartiles of lignan intakes (Ptrend = 0.039) (35). An inverse significant association was observed between magnesium intakes and FBG concentrations (β = -0.08, 95% CI = -0.76, -0.017) (36). FBG or odds of FBG ≥ 100 mg/dL was not significantly associated with fructose intake (37), phytochemical index (38), glycemic index and glycemic load (39), or HEI-2005 (40). Higher adherence of LCD was not associated with higher odds of elevated blood glucose levels after 3.6 years follow-up in children and adolescents, aged 6-19 (41). After 3.6 years of community lifestyle modification aiming at improving nutrition intakes, physical activity, and smoking cessation, the number of participants with high FBG in the intervention group was significantly lower than that observed in the control group (23.7% vs. 29%, P < 0.001) (42).

Higher adherence to the traditional Iranian diet, and higher intakes of total dairy, milk, and nut were associated with reduced odds of T2DM, although the risk of T2DM increased with higher intake of dietary nitrite in those with low vitamin C intake (Figure 1). 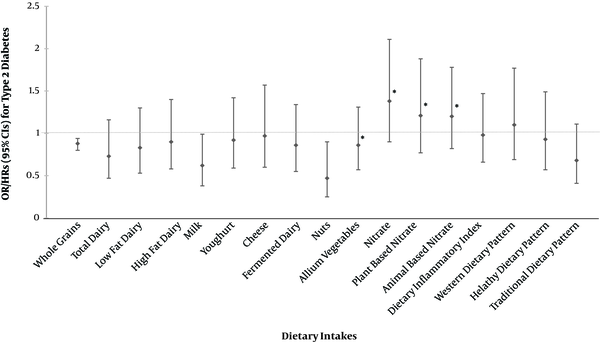 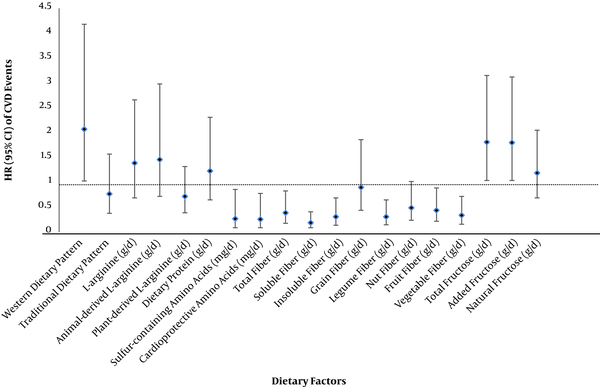 Main dietary factor related to increased risk of CVD in our population was western DP, whereas higher consumption of allium vegetables had a protective effect. Our novel analysis also revealed that pattern of amino acid intakes may contribute in the development of CVD.

Previous studies in the framework of the TLGS, conducted on the association of dietary factors with kidney function, estimated glomerular filtration rate (eGFR) was calculated using the modification of diet in renal disease study equation and CKD was defined as eGFR < 60 mL/min/1.73 m2.

Regarding food groups, in a cross-sectional study, compared to participants taking < 0.5 serving/week, consumption of over four servings of sugar sweetened beverages (SSBs) and sugar sweetened carbonated soft drinks (SSSDs) per week was related to increased OR of prevalent CKD (1.77 and 2.14, respectively). In a longitudinal analysis, risk of incident CKD increased by consumption of four servings/week, compared to less than 0.5 serving/week of SSBs (OR: 1.96, 95% CI: 1.23 - 3.15) and SSSDs (OR: 2.45, 95% CI: 1.55 - 3.89) (55). In a cross-sectional study higher risk (OR: 1.48, 95% CI: 1.05 - 2.13) of CKD was found comparing the highest tertile to the lowest one of nitrate-containing vegetables (NCVs); however, after 3 years of follow-up, there was no significant association between consumption of total NCVs and its categories with the occurrence of CKD (54). In a 6-year longitudinal analysis, the highest, compared to the lowest tertile of dietary nitrite was accompanied with a reduced risk of CKD (OR: 0.50, 95% CI: 0.24 - 0.89). However, dietary intake of nitrate had no significant association with the risk of CKD (57). In a cross-sectional analysis, the OR (95% CI) of CKD in the highest, compared to the lowest quartile of potential renal acid load (PRAL) of dietary intakes was 1.38 (95% CI: 1.02 - 1.83) after adjustment for age, sex, and body mass index. The positive association of PRAL and risk of CKD remained significant (OR: 1.42; 95% CI: 1.06 - 1.91) after additional adjustment for energy intake, smoking, dietary intake of total fat, carbohydrate, dietary fiber, fructose, sodium, T2DM, and hypertension (11). In a 3-year longitudinal analyses, compared to the first quartile of dietary AGEs intakes from fat, participants of the fourth quartile had higher risk of CKD (OR: 2.02; 95% CI: 1.16 - 3.54); the association between AGE intakes from meat and CKD was not statistically significant (55). In a 6-year longitudinal analyses, a higher habitual intake of allium vegetables was related to 32% lower incidence of CKD (hazard ratio: 0.68; 95% CI: 0.46 - 0.98; P for trend < 0.11) in a multivariable-adjusted model (1). 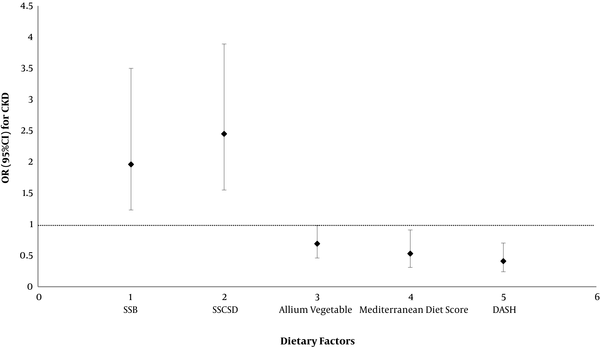 Dietary patterns of most Tehranian adults need improvement. The FFQ is an acceptable tool for estimation of nutrient and food group intakes and determining DPs of Iranians to study association between DPs and health outcomes in epidemiological studies.

Some micro- and macronutrients, healthy DPs and allium vegetables were dietary sources of renal-protective nutrients. Higher adherence to healthy food choices were associated with reduced odds of dysglycemia and CVD.

It is recommended to investigate time trends of conforming dietary factors in accordance with dietary guidelines and their relations to T2DM, CVD and CKD to ensure precious dietary recommendations.

The authors wish to acknowledge Ms. Niloofar Shiva for critical editing of English grammar and syntax of this manuscript.

Copyright © 2018, International Journal of Endocrinology and Metabolism. This is an open-access article distributed under the terms of the Creative Commons Attribution-NonCommercial 4.0 International License (http://creativecommons.org/licenses/by-nc/4.0/) which permits copy and redistribute the material just in noncommercial usages, provided the original work is properly cited.
download pdf 145.89 KB Get Permission (article level) Import into EndNote Import into BibTex
Number of Comments: 0