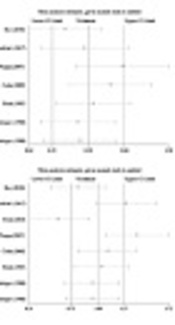 Recently, the relationship between branched-chain amino acids (BCAAs) and diabetes mellitus (DM) has attracted worldwide attention. However, the results related to plasma BCAAs concentrations and gestational diabetes mellitus (GDM) lack statistical power due to the small sample size of a single article.

A systematic search was performed to select eligible publications using PubMed and EMBASE databases until July 23, 2018. The references of relevant articles were also manually searched. The quality evaluation of included studies was according to the guidelines of the Newcastle-Ottawa Scale (NOS). Data were analyzed with Review Manager 5.3 and STATA 14.0 software. In total, seven articles (including eight studies) involving 432 subjects were included.

Plasma BCAAs, as potential biomarkers, might be associated with GDM risk, which provides useful information for the prevention and early diagnosis of GDM.

The increasing prevalence of diabetes mellitus (DM) is a serious public health issue worldwide, causing significant morbidity and mortality (1, 2). Approximately 415 million people aged 20 to 79 suffered from DM worldwide in 2015, and the prevalence of cases is expected to increase substantially in the coming decades (3). The number of patients is projected to rise to 592 million by 2030, bringing with it debilitating and costly consequences, including retinopathy, cardiovascular disease, kidney dysfunction, etc. (4). Among all types of DM, gestational diabetes mellitus (GDM) could be especially difficult on women because it may be a bigger threat to the women. Furthermore, GDM is diabetes that is first diagnosed in the second or third trimester of pregnancy and is not clearly pre-existing type 1 or type 2 diabetes (5). Gestational diabetes mellitus can cause unique difficulties (e.g., miscarriage, birth defect, preeclampsia heart attack, female sexual dysfunction, etc.) (6-8). These findings highlight the necessity to find effective therapies to prevent and treat DM.

Branched-chain amino acids (BCAAs), consisting of leucine, isoleucine, and valine, are essential amino acids that cannot be made by the body, and must be primarily obtained from the diet (9). Abnormal plasma BCAAs concentrations were associated with metabolic disease and several pathological states, such as obesity, metabolic syndrome, liver disease, chronic kidney disease, DM, etc. (10-12). Recently, the relationship between BCAAs and DM has attracted worldwide attention. Several studies found GDM have elevated plasma amino acids, especially BCAAs (13-16), while others reported that they were within normal ranges (17-19). Furthermore, the results related to plasma BCAAs concentrations and GDM lack statistical power due to the small sample size of a single article.

Therefore, the researchers conducted the meta-analysis to further investigate the association between plasma BCAAs concentrations and GDM.

The information from all eligible studies was independently evaluated by two investigators. A third person resolved the differences until all reached a set of similar statements. The following information was extracted from each eligible study: Name of the first author, year of publication, ethnicity, number of participants, demographic characteristics (e.g. number, age and body mass index (BMI)) of case and control groups, mean and standard deviation (SD) or median and quartiles of three individual or total plasma BCAAs concentrations levels in both the patients and controls.

The methodological quality assessment of the included study was independently conducted by two investigators according to the guidelines of the Newcastle-Ottawa Scale (NOS). This scale uses a star system (with a maximum of nine stars), which is composed of three domains (21): Selection of participants (including four items), comparability of study groups (including two items), and the ascertainment of exposure or outcome (including three items), which are used to judge the applicability and risk of bias (22). Each question was answered with “yes”, “no”, or “unclear”. A “yes” answer represents the low-risk of bias and is assigned a score of one, while a “no” or “unclear” answer represents a high-risk of bias and is assigned a score of zero. Thus, the quality score of studies ranged from zero to nine stars. Higher scores were a reflection of lower risk of bias (22). Studies that scored seven stars or greater than seven stars were regarded as lower risk of bias, and those scored less than seven stars indicated higher or moderate risk.

Meta-analysis was conducted using STATA 14.0 (Stata Corporation: College Station, TX, USA) and Review Manager 5.3 (Copenhagen: Nordic Cochrane Centre, the Cochrane Collaboration, 2014) software. Considering that the included studies used different measurement methods with various units for the same indicator variable, the researchers pooled the standardized mean difference (SMD) and their 95% confidence intervals (CIs) to detect the effect size between the two groups. Heterogeneity among studies was assessed using Cochran Q test and I-squared (I2) statistics index. A P value of the χ2 based Cochran Q test less than 0.1 or I2 index greater than 50% suggested the existence of overall statistically significant heterogeneity and the utilization of a random-effect model. Otherwise, a fixed-effect model was used (23). The stratified analyses based on age, BMI, and ethnicity were conducted on those comprising of two or more studies. Sensitivity analyses were performed by excluding one study at a time and recalculating the effect size. Moreover, publication bias was detected using the Egger’s test (24). Two-sided P value less than 0.05 was considered statistically significant.

Initially, 3041 potentially relevant articles from electronic databases and other sources were searched, of which 727 duplications and 2239 irrelevant articles were excluded. After full-text review of retained candidate articles, 68 potential studies were further excluded because of failure to accord with the inclusive criteria. Finally, seven eligible articles (13-18) including eight studies with 432 subjects were included in the meta-analysis (Figure 1). Among these articles, only one article focused on isoleucine and valine, and six articles (including seven studies) reported BCAAs. Thus, six articles with seven studies examined circulating leucine concentrations levels, and seven articles (including eight studies) detected circulating isoleucine and valine concentrations levels. As shown in Table 1, Metzger et al. (14) studied the role of BCAAs in two independent research samples, which were regarded as two independent studies and included in this meta-analysis. Thus, seven articles including eight studies covering 229 patients and 203 controls were published from 1980 to 2018. All studies were case-control studies. Studies were carried out in Sweden, Canada, Iran, Korea, Greece, Italy, and USA. The mean age of patients ranged from 27.0 to 38.6 years, and the mean BMI ranged from 25.70 to 30.43 kg/m2. The methodological quality of each study was evaluated using NOS. Each study received moderate or high quality with scores between seven and nine, as exhibited in Table 1.

Table 1. Characteristics and Quality Assessment of the Included Studies in the Meta-Analysis

To explore the sources of heterogeneity, stratified analysis based on age (< 30 vs. ≥ 30), BMI (< 28 vs. ≥ 28), year of studies (2005 and lower vs. 2007 and higher), and ethnicity (Asian vs. Caucasian) were performed. As summarized in Table 2, the results suggested that age, BMI, and ethnicity were positively associated with plasma BCAAs levels in the patients. Although heterogeneity was reduced in the mean age of < 30 years, mean BMI ≥ 28 kg/m2, publication year < 2007 and Asian groups, dramatic heterogeneity persisted in the other groups. Considering the existence of heterogeneity in the current study, the researchers performed sensitivity analysis, and removed any of the included studies that had no significant impact on the meta-analysis outcomes, suggesting that the results were stable (Figure 3).

Plot of sensitivity analyses. A, leucine; B, isoleucine; C, valine.

The current study showed that the increase of individual plasma BCAAs concentration may be related to the increased risk of GDM, however, the heterogeneity between different studies was relatively high, and the researchers used subgroup analysis to find the reasons for the heterogeneity.

Recently, the plasma BCAAs as biomarkers for DM patients has gained much attention (12). The complex association between diabetes and branched-chain amino acids was not fully understood (25). Accumulating evidences demonstrates that their abnormal concentrations associated with various DM, such as type 2 diabetes mellitus (T2DM) and GDM (26-29). More importantly, plasma BCAAs are extremely stable and present in serum, plasma, urine, milk, etc. (26, 30-32). Moreover, the use of plasma BCAAs is less invasive and less traumatic to the subjects. Furthermore, one hypothesis involves a mammalian Target of Rapamycin Complex 1 (mTORC1) that is activated by BCAA and activated by insulin and glucose by cellular ATP availability (33). If this is a relevant pathway, BCAA overload may cause insulin resistance by activating the mammalian target of rapamycin (mTOR) and lead to an increase in acylcarnitine (25, 34). Therefore, BCCAs may be potential biomarkers of GDM and plasma BCAAs can be served as reliable biomarkers for prevention, early diagnosis, and treatment of diabetes. In this study, the researchers demonstrated that plasma BCAAs are elevated in GDM patients, which are promising biomarkers for prevention, early detection, and treatment of GDM.

Among these diabetes-related metabolites, BCAAs are the most frequently studied metabolites (28). Dysregulation of plasma BCAAs was observed in multiple diseases, including GDM (16). Plasma BCAAs concentrations are different in different DM patients, which is useful to detect early DM (35), distinguish DM subtypes (16), and correlate with age, BMI, and ethnicity of patients (36, 37). The latest research suggests that normal or impaired glucose tolerance and T2DM groups have significant differences in BCAAs, and GDM has elevated plasma BCAAs (38). Additionally, similar results were found after BMI adjustment (38). However, Pappa et al. (18) documented that these significances disappeared, and BCAAs were within normal ranges in GDM patients.

The above-mentioned studies demonstrated that plasma BCAAs might serve as wonderful biomarkers for GDM (12-15), yet others did not support these roles in GDM detection (16-18). Therefore, the current researchers further evaluated the relationship between plasma BCAAs and GDM, and found that all three individual plasma BCAA concentration levels in GDM group were higher than those in the control group (leucine: SMD = 3.76, 95% CI: 1.70 - 5.82, P (SMD) < 0.001; isoleucine: SMD = 3.15, 95% CI: 1.42 - 4.87, P (SMD) < 0.001; valine: SMD = 2.77, 95% CI: 1.21 - 4.32, P (SMD) = 0.001) and the difference was statistically significant. These three representative parameters confirmed that the elevated individual plasma BCAAs concentrations might be associated with increased GDM risk, which also proved that plasma BCAAs are promising predictors for examining GDM.

Some strengths could be emphasized in the current study. Firstly, the researchers conducted a quantitative analysis for the first time to estimate the association between plasma BCAAs concentrations and DM. Secondly, comprehensive methods including strict literature screening and quality evaluation process were utilized to reduce bias. Thirdly, stratified analysis showed that some variables (age, BMI, publication year and ethnicity) could be potential sources of heterogeneity.

However, limitations do exist in the present study. Firstly, only seven articles (including eight studies) were included. Additionally, the number of the included articles in some subgroups is relatively small. Secondly, some included studies that covered a smaller number of subjects. Thirdly, due to the limited number of included articles, the researchers did not discuss the association between total BCAAs and GDM. Fourth, there may be potential publication bias.

In summary, this study demonstrates that BCAAs are associated with GDM risk and might be potential biomarkers for GDM. Well-designed and large-scale prospective studies are required to further confirm the validity of the results.

Copyright © 2019, International Journal of Endocrinology and Metabolism. This is an open-access article distributed under the terms of the Creative Commons Attribution-NonCommercial 4.0 International License (http://creativecommons.org/licenses/by-nc/4.0/) which permits copy and redistribute the material just in noncommercial usages, provided the original work is properly cited.
download pdf 516.66 KB Get Permission (article level) Import into EndNote Import into BibTex
Number of Comments: 0