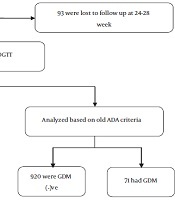 This study aimed to assess the prevalence of gestational diabetes mellitus (GDM) based on two sets of criteria, namely the old criteria suggested in 2009 by the American Diabetes Association and new criteria of the International Association of Diabetes in Pregnancy Study Group. We also evaluated the predictive power of the risk factors of GDM.

Pregnant women from three outpatient clinics in Tehran, Iran, participated in this cross-sectional observational study. During the first perinatal visit, demographic data, medical histories, weight, and height of mothers were recorded. The mother’s fasting glucose and glycosylated hemoglobin were measured. An oral glucose tolerance test was also performed. The prevalence of GDM, based on the two criteria, was estimated and its predictive factors were investigated.

Using the new criteria, the prevalence of GDM increases by 2.2 folds compared to the old criteria. Several factors can independently predict the occurrence of GDM.

Gestational diabetes mellitus (GDM) is defined as hyperglycemia at any time in pregnancy based on defined thresholds that are lower than those considered for overt diabetes (1, 2). It is the most common metabolic disorder during pregnancy, with a total prevalence of about 7%. However, depending on the study population and diagnostic criteria, higher prevalence rates have also been reported (3, 4). Different studies have reported that a family history of type II diabetes mellitus (DM), GDM in previous pregnancies, giving birth to a child with macrosomia, body mass index (BMI) > 30 kg/m2, idiopathic intrauterine fetal death (IUFD), and maternal age > 35 are among the risk factors of developing GDM (5).

Although most women recover after delivery, the tight control of GDM is associated with lower pregnancy and infant complications. Furthermore, the diagnosis of GDM can initiate interventions to decrease the later risk of developing diabetes or at least its early diagnose in case it occurs (6). Hence, the early detection of GDM is essential to avoid complications. Cost-effectiveness studies have shown that screening, diagnosis, and treatment of GDM can improve pregnancy outcomes and are, therefore, cost-effective, regardless of the type of treatment (7).

Different methods and time frames have been proposed for the diagnosis of GDM (Table 1), but there is still a great debate over the best approach (6). Changes in diagnostic criteria shift their sensitivity and specificity and consequently the number of pregnant women who are diagnosed with GDM. Based on the results of the HAPO study, a new method for the diagnosis of GDM has been adopted by the American Diabetes Association (ADA). The so-called International Association of Diabetes in Pregnancy Study Group (IADPSG) criteria are better correlated with disease complications in the fetus, infant, and mother. This method has resulted in a 2 to 3-fold increases in the prevalence of diagnosed GDM (8-10). While some researchers have criticized this fact, others believe that due to the number of cases that can easily be controlled with lifestyle changes, the new method reduces the complications of GDM at a lower cost (11).

Our study aimed to evaluate the effect of IADPSG criteria on the prevalence of diagnosed GDM; we also sought to evaluate the predictive power of each risk factor of GDM.

This was a cross-sectional study. The study population included pregnant women aged 18 years or older who visited the obstetrics and gynecology clinics of three university-affiliated hospitals in Tehran between October 2011 and November 2012. The exclusion criteria were an unwillingness to participate in the study, failure to complete the Glucose Tolerance Test (GTT), having an pregnancy with assisted reproductive technology, and a history of overt diabetes before the index pregnancy. Moreover, pregnant women consuming medications effective on glucose metabolism, patients with chronic liver disease, and those with endocrine disorders were excluded from the study. The University Ethics Committee approved the study protocol. All patients signed informed consent forms. Considering the GDM prevalence of 14%, α = 0.05, and accuracy of 5%, the sample size was calculated to be around 1100 women that were selected using consecutive sampling.

Demographic and clinical data were obtained during 10-min interviews, including age, smoking, alcohol consumption, history of hypertension, gestational hypertension, diabetes in first degree relatives or in previous pregnancies, polycystic ovary syndrome (PCOS), having a low-birthweight infant, macrosomia, and abortion. When a clear history of PCOS was absent, we obtained the history of signs and symptoms of androgen excess (including acne or hirsutism) and ovarian dysfunction. All interviews were conducted by either of the three researchers (MA, FF, and MN). The weight without shoes and with a light dress at the first prenatal visit (before 24 weeks of gestational age) was measured by a trained nurse using a standard digital scale (Seca, Hamburg, Germany) with an accuracy of 0.1 Kg. Height was measured without shoes and with a standard wall Stadiometer (Seca) with an accuracy of 0.1 cm. Blood pressure was measured twice by trained staff after a 15-min rest, in the sitting position, using a standard mercury sphygmomanometer with an accuracy of 1 mmHg. Gestational age was calculated based on the last menstrual period. If the exact date was not specified, the time of delivery was calculated based on sonographic evaluation (between weeks 6 and 28 of pregnancy). To check the fasting glucose and glycosylated hemoglobin, a blood sample was taken from the mother after 8-h fasting in the first prenatal visit.

For mothers whose overt diabetes was ruled out at the first prenatal visit, a standard oral glucose tolerance test (OGTT) was performed between 24 and 28 weeks of gestation. All evaluations were performed using an enzymatic method. A blood glucose test was performed using Enzymatic Glucose Oxidase Method and the coefficient of variation (CV) was below 5%.

Table 2. Demographic and Clinical Characteristics of the Participantsa

aValues are expressed as mean ± standard deviation or median (IQR 25 - 75).

cP value between overt DM and GDM (-)

moreover, 39 (2.95%) women had overt DM in their first prenatal visits. Of 1084 pregnant women who did not have overt diabetes at first visit, 93 did not return for further evaluation at weeks 24 - 28 of pregnancy and were not followed up. GTT was performed for the remaining 991 participants. Based on the old ADA criteria (having two plasma glucose measurements of above the specified values), 71 had GDM and the calculated prevalence of GDM was 7.1% (Figure 1). Based on the IADPSG criteria, 156 patients were diagnosed as having GDM and the prevalence of GDM was 15.7% (Figure 1). In 84.7% of these patients, the diagnosis was made by the FPG criteria.

Table 3. Past History and Biochemical Characteristics of Participants with and Without GDM

Various risk factors have been suggested for the development of GDM in previous studies. BMI has been reported in prior studies to be a predictive factor for GDM. In the present study, we also found that higher BMI at the beginning of pregnancy and more weight gain during pregnancy were the risk factors for GDM. The reduction of insulin sensitivity among obese pregnancies can justify this relationship. This obesity-related insulin resistance increases the normal glucose levels (27). This finding emphasizes the importance of weight control strategies, especially during pregnancy. In addition, our study showed the family history of diabetes, history of macrosomia, history of GDM in previous pregnancies, abortion, and impaired GTT to be the independent risk factors for GDM. Moreover, there was a significant correlation between age and onset of GDM. Macrosomia during index pregnancy may indicate poor maternal diet or GDM severity. This, in turn, predisposes the mother to recurrent GDM (28). The predisposing effect of a history of GDM may result from a “shared risk factor” in repeated pregnancies (29). Miscarriage during index pregnancy may point to the presence of various endocrine pathologies or poor blood glucose control. These may affect the normal metabolism of insulin, hence predisposing the mother to GDM (30). In line with the findings of this study, Teh et al. reported that a history of GDM and BMI of above 35 are two independent risk factors for GDM (31). However, Teede et al. reported that a history of GDM, higher maternal age and BMI, and a family history of diabetes were the most important risk factors for GDM (32). Four previous studies have shown that a family history of diabetes, history of GDM, higher maternal age, and BMI are the main risk factors for GDM (33-35).

In addition, although pregnant women at risk of GDM often receive training on lifestyle change and diet to control their weight, studies have shown that the diagnosis of GDM is an important factor in reaching the desired weight for these mothers (36). The awareness of diabetes creates a motivation to take more serious measures to adjust the lifestyle (37). Thus, early diagnosis and quick management of GDM is of great importance. Using IADPSG criteria, which are more sensitive for the diagnosis of GDM, is a better screening test for this purpose.

Our study faces some limitations. We did not evaluate the clinical outcomes of GDM in this study. Furthermore, due to its observational nature, the complete elimination of biases including “referral bias” was not possible. We did not have access to the pre-pregnancy weight of the participants and thus we assumed that this measurement was the best estimate of their pre-pregnancy BMI that we could have under study conditions. Moreover, the diagnosis of PCOS was mainly based on self-report.

However, our study, applied both criteria for the diagnosis of GDM simultaneously, which made it possible to compare the prevalence of GDM based on these criteria with high precision. The sample size was also large (> 1,000 participants).

Using the IADPSG criteria, a higher number of mothers who would otherwise be considered as healthy by the old criteria were diagnosed with GDM and received early treatment for the prevention of its complications. This may render this set of criteria more favorable. However, medicalization of pregnancy due to the higher rate of GDM is one of the disadvantages of using IADPSG criteria. In addition, our study did not evaluate the effect of criteria on feto-maternal and neonatal outcomes. Thus, we cannot recommend one of the criteria over another. The study of different risk factors and analysis of the effect of each factor on the prediction of GDM development can help us diagnose at-risk individuals for whom the GTT is either not available or not feasible. In addition, this study may be considered a start for the recognition of the power of each risk factor in GDM incidence.

According to the findings of the present study, the prevalence of GDM showed a 2.2-fold increase when the IADPSG criteria were applied in lieu of the old criteria. It was also shown that increased maternal BMI and age, family history of diabetes, history of GDM, and macrosomia in pregnancies are the risk factors for GDM.

The authors would like to thank the staff of Perinatology Clinics at Shohada-E-Tajrish Hospital, Taleghani Hospital, and Imam Hossein Hospital.

Copyright © 2019, International Journal of Endocrinology and Metabolism. This is an open-access article distributed under the terms of the Creative Commons Attribution-NonCommercial 4.0 International License (http://creativecommons.org/licenses/by-nc/4.0/) which permits copy and redistribute the material just in noncommercial usages, provided the original work is properly cited.
download pdf 150.94 KB Get Permission (article level) Import into EndNote Import into BibTex
Number of Comments: 0