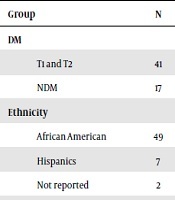 A cross-sectional study using the EndoPAT device was performed on children with poorly-controlled DM and NDM children. ANOVA, t-test, Mann-Whitney U test, multiple linear regression and Spearman correlation were used.

Endothelial dysfunction (ED) is an early sign of vascular compromise (1) and likely to be present prior to the development of atherosclerosis as it precludes cardiovascular disease (CVD). The major risk factors for CVD are obesity, diabetes, dyslipidemia and elevated blood pressure among others (2). Although CVD is rare in children (3), the risk factors are sometime present since childhood. Moreover, ED was noted in asymptomatic children and young adolescents who had risk factors to develop atherosclerosis without having CVD (4).

Currently, measured glycated hemoglobin (A1C) is the most commonly used and best evaluated marker for glycemic control and vascular complications prediction in diabetic patients (5). The Diabetes Control and Complication Trial (DCCT) Research Group 2000 states that strict glycemic control delays the onset and slows down the progression of diabetic vascular complications (6), which include microvascular (retinopathy, nephropathy, and neuropathy) and macrovascular (cardiac disease, peripheral vascular disease and stroke) diseases (3). Different treatment modalities (4), some aiming for better diabetes control, have shown to reverse the ED. Endothelial function is likely to be reversible in the early process of atherogenesis in children and young adults (4). Through the years, techniques to assess the function of the endothelium have been used clinically and routinely to monitor for CVD in adults, approved by the Food and Drug Administration (FDA). However, as of today, the use of these techniques continues to be part of research studies within the pediatric population. The EndoPAT (peripheral arterial tonometry) is a non-invasive device that measures endothelial function calculated as reactive hyperemic index (RHI). The greater the vasodilation, the higher the RHI (7). A Mayo clinic study (8) which compared the EndoPAT results to coronary injection of acetylcholine via cardiac catheterization, concluded that the normal RHI should be > 1.67. Studies of endothelial function using the EndoPAT device are sparse within the pediatric population and within those, different norms for children have been described. We used an RHI of 1.67 as the cutoff for normal within the pediatric population as other studies have also used (9, 10). There are other devices used to evaluate the endothelial function, for example, flow-mediated vasodilation (FMD) measured by ultrasound of the brachial artery, pulse wave velocity (PWV), radial artery tonometry (RAT) and ultrasonographic measurement of common carotid artery intima-media thickness (CIMT) (11).

An Institutional Review Board (IRB) approved cross sectional study using the EndoPAT device was performed in children/adolescents with T1DM and T2DM who were poorly-controlled along with overweight/obese children. We enrolled subjects in the age range of 7 - 21 years from the pediatric endocrinology clinics at SUNY Downstate Medical Center and Kings County Hospital Center, Brooklyn, NY. Written informed consent and assent were obtained from subjects and parents as appropriate. We enrolled 33 T1DM subjects, 8 T2DM subjects and 17 NDM obese subjects. Poorly-controlled DM was defined as A1C ≥ 7.5% more than 6 months after diagnosis. Subjects with TIDM were treated with insulin and T2DM with metformin alone or combination of metformin and insulin. All NDM overweight/obese subjects were normotensive, (systolic blood pressure [SBP] and diastolic blood pressure [DBP] < 90th % based on age, sex, and height as per National Institutes of Health (NIH) guidelines (12), had normal fasting blood glucose concentrations (< 100 mg/dL), normal A1C (< 5.7%) and normal fasting lipid profile (total cholesterol < 170 mg/dL, low density lipoprotein cholesterol (LDL) < 110 mg/dL, high density lipoprotein cholesterol (HDL) > 45 mg/dL and triglyceride (TG) < 90 mg/dL) (13). A positive family history of diabetes, hypertension, hypercholesterolemia or cardiovascular disease was not an exclusion criteria. Mean A1C represents the average value of A1C within the last year, while latest A1C is the last A1C value obtained. This value was obtained within 3 months before the EndoPAT measurements. The following subjects were excluded: T1DM and T2DM with most recent A1C < 7.5%, abnormal renal function (micro-, or macro-albuminuria), retinopathy or neuropathy, presence of hyperlipidemia, pre-hypertension or hypertension, smoking, coronary artery disease, congenital heart disease, carotid artery disease, peripheral vascular diseases, inflammatory or infectious process within the last 3 months, using medications that would affect endothelial function such as oral contraceptive pills or malignancy. Endothelial function was assessed by the same physician with the EndoPAT 2000 after subjects had an overnight fast and within 2 months of the laboratory testing. The EndoPAT device allows non-invasive measurement of endothelial function without the disadvantages of conventional ultrasound measurement. It detects plethysmographic pressure changes in the fingertips caused by the arterial pulse and translates this into a peripheral arterial tone. It is an integrated software program that calculates the RHI automatically between the flow in the arm with reactive hyperemia and the control arm. The subjects lay on a reclining chair with arms supported and hands adjusted at heart level so fingers can freely hang for a minimum of 20 minutes in a quiet, temperature-controlled (72 - 75 degree F) room with dim light.

Sixty-nine participants were assessed for enrollment in the study, 11 patients were excluded from the analysis (3 patients with A1C less than 7.5%, 3 patients with no EndoPAT device reading obtained, 1 patient with TIDM who developed nephropathy, and 4 patients who developed pre-diabetes). A total of 58 patients were included for data analysis. Different parameters are described in Table 1 while the statistical analysis of groups based on different factors is shown in Table 2.

Table 1. Parameters Among the Study Groups

Table 2. Statistical Analyses of RHI Based on Different Factors

Studies have shown that children with T1DM had significant ED when compared with non-diabetics (16, 17). Another study using the EndoPat demonstrated significantly lower RHI scores in obese adolescents when compared to lean controls (18). Krantz et al. demonstrated that the mean CIMT was greater in adolescents with T1DM when compared with controls (19). Bruzzi et al. demonstrated impaired FMD in T1DM children when compared with healthy controls (14). Ciftel et al. compared children with T1DM without complications and healthy children (15). Their study demonstrated ED (using FMD and CIMT methods) and increased arterial stiffness (using PWV) in the T1DM group (15). The SEARCH study compared the endothelial function in young patients with T1DM and T2DM using FMD, PWV and RAT, and concluded that youth with T2DM have worse arterial stiffness when compared with T1DM (P < 0.01) (20). In our study, we included T1DM and T2DM patients to assess if the type of diabetes influences endothelial dysfunction. Surprisingly, the arterial stiffness assessed by EndoPAT among patients with T1DM and T2DM were not significantly different. While the T1DM group had slightly higher A1C levels, there were not statistically different. Subjects with T1DM had more years of disease compared to those with T2DM although not able to reach statistical significance. Despite this, the endothelial dysfunction among these groups was similar. These findings are likely to the fact that in patients with T2DM, ED precedes overt hyperglycemia (21) by several years (2, 22), rather than caused by it. Hyperinsulinemia, insulin resistance and obesity are all factors affecting the endothelium in T2DM patients even before the disease is diagnosed. Conversely, ED in patients with T1DM develops after period of hyperglycemia.

In the Framingham Heart Study in adults, a significant inverse relation was demonstrated between endothelial function (determined by EndoPAT) and multiple cardiovascular risk factors such as male sex, BMI, total/HDL cholesterol, DM, smoking, and lipid-lowering treatment (23). Bruzzi et al. (14) did not find significant correlation between diabetes duration and FMD. Similarly, we did not find significant correlation of diabetes duration with RHI using the EndoPAT device. Of note, the EndoPAT device evaluates endothelial function in the microvasculature while the FMD evaluates such function in larger vessels. Selamet Tierney et al. (24) tested prospectively the reproducibility and feasibility of the EndoPAT and concluded that in healthy adolescents, EndoPAT is feasible, has excellent reproducibility, and provides an easy and reliable means of assessing endothelial function in the pediatric population.

In our study, the endothelial function as reflected by RHI was not statistically different when comparing diabetic patients (T1 and T2) with the NDM obese patients, even when taking type of diabetes and BMI into account. Both groups had a lower RHI score below 1.67 suggesting that each risk factor (diabetes or obesity) have a negative effect on the endothelium. A previous study done by Wadwa et al. (20) suggested that the difference in arterial stiffness between patients with T1DM and T2DM could have been due to elevated blood pressure and central adiposity. In our study, all subjects involved were normotensive at the time of the test though central adiposity was not measured.

As reported by Bhangoo et al., RHI increases during puberty in males as well as females. Endothelial function appears to improve during puberty as a result of hormonal changes, estrogen and DHEAS (25). Bruzzi et al. (14) reported that females had better endothelial function when compared to males in children and adolescents with T1DM. In our study, females had higher RHI score implicating better endothelial function when compared to males in the NDM obese group despite controlling for pubertal status. However, the difference was not sustained within the diabetes groups, T1DM and T2DM.

There have been conflicting data in regards to endothelial function in obese children. Landgraf et al. (26) and Mahmud et al. (27), reported lower RHI in obese children when compared with lean children. However, Tryggestad et al. (28) did not find such difference. In our study, no significant changes in the RHI were noted when the obese and T2DM patients were compared while controlling for BMI or glycemic control.

Our study has limitations. Despite being representative of our population, our sample size was small and unevenly distributed. Our study did not include non-diabetic lean subjects due to difficulty recruiting. Therefore, the findings should be interpreted with caution and further larger studies are needed. Nevertheless, our study provided relevant preliminary information for further studies regarding endothelial function in children.

Our data showed that patients with poorly-controlled DM as reflected by latest A1C of 10% or more had worse endothelial function as reflected by lower RHI score. Longitudinal studies are needed to elucidate the significance and implications, if any, of these findings. Assessment of endothelial function using EndoPAT device may be useful as part of routine care for DM and NDM obese children and adolescents.

Copyright © 2019, International Journal of Endocrinology and Metabolism. This is an open-access article distributed under the terms of the Creative Commons Attribution-NonCommercial 4.0 International License (http://creativecommons.org/licenses/by-nc/4.0/) which permits copy and redistribute the material just in noncommercial usages, provided the original work is properly cited.
COMMENTS