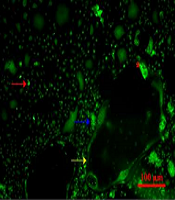 Vitamin D is an important steroid that can regulate bone metabolism including osteoclast (OC) differentiation. Transient receptor potential cation channel subfamily V member 5 (TRPV5), is a calcium channel protein involved in OC differentiation. However, the impact of vitamin D on TRPV5 expression during OC differentiation is not clear.

To determine if 1,25-dihydroxyvitamin D3 (1,25(OH)2D3) regulates the expression of TRPV5 during OC differentiation.

Osteoclasts (OC) are multinucleated cells that resorb bone in vivo (1). Its differentiation is induced by two important factors, e.g. macrophage colony-stimulating factor (M-CSF) and the receptor activator of nuclear factor-κB ligand (RANKL) (2). Both factors can induce OC differentiation in vivo and in vitro (3-5). The OC precursors (OCP) are first differentiated from bone marrow mononuclear macrophages (BMMs) by M-CSF. These cells fuse to form tartrate-resistant acid phosphatase (TRAP) positive multinucleated cells in the presence of RANKL (6). Mice deficient of RANKL or its receptor RANK develop severe bone sclerosis, further indicating that the RANKL-RANK pathway is essential for OC differentiation (7, 8).

Vitamin D can be produced by 7-dehydrocholesterol of the skin under ultraviolet light exposure and also be consumed directly from the food. Vitamin D is processed by the kidneys after liver processing to obtain the main active form 1, 25-(OH)2D3. The active form of 1, 25-(OH)2D3 binds to the serum vitamin D binding protein (DBP) and is then transported to the target tissue/organ through the blood circulation. The important biological functions of 1, 25-(OH)2D3 is acting through a soluble receptor protein called vitamin D receptor (VDR). Active 1,25(OH)2D3 binds to its vitamin D receptor (VDR) and regulates the physiological activity of osteoblasts (OB) by enhancing RANKL secretion, which results in enhancing the differentiation of OC (9-11). On the other hand, 1,25(OH)2D3 can also inhibit c-Fms and RANK expression in OCP and therefore inhibit OC differentiation (12). The expression of nuclear factor of activated T cells cytoplasmic 1 (NFATc1) could also be inhibited in the OC differentiation process by 1,25(OH)2D3 treatment. Thus, it is imperative to study the mechanism of regulation 1,25(OH)2D3 on OC differentiation.

The Ca2+ ion is an intracellular secondary messenger and has important physiological functions on a wide variety of cells types. It can be uptaken into the cytoplasm through a calcium channel expressed on plasma membrane. On the contrary, Ca2+ moves across the basolateral membrane and then into blood circulation via Na+/Ca2+ exchanger and plasma membrane calcium pumps (PMCA) such as PMCA1b (13-15). Transient receptor potential (TRP) cation channel subfamily vanilloid member 5 (TRPV5) constitutes a calcium influx pathway in a wide range of epithelial cell types (16). As one of the most selective calcium ion TRP channels, its mRNA is abundantly expressed in bone and OC of humans and rodents (17). Moreover, Ca2+ oscillation can be observed in RANKL-treated BMMs during OC differentiation (18). It has been thought that TRPV5 is involved in OC differentiation. However, whether 1,25(OH)2D3 regulates OC differentiation by affecting TRPV5 expression has not been studied.

For this study, BALB/c mice (5 - 6-week-old, male, weight 20 to 25 g) of clean grade were purchased from Comparative Medical Center of Yangzhou University, were sacrificed by euthanasia.

Bone marrow cells were isolated from long bones (including femur and humerus). The cells were then treated with red blood cell lysis buffer (Sigma, USA) to remove erythrocyte and cultured overnight in α-minimum essential medium (α-MEM; Gibco) supplemented with 10% fetal bovine serum (FBS; Gibco). Floating cells, which contained BMMs, were collected and resuspended at the density of rated amount per mL. The cells (plated at concentration of 2 × 105 cells/well and 6 × 105 cells/well in 24-well and 12-well plates respectively) were cultured with α-MEM supplement with 10% FBS and were treated by M-CSF (10 ng/mL) and RANKL (50 ng/mL) (Peprotech, USA)-induced form OC as previously reported (19). After OC formation, the cells were treated by different concentrations of ruthenium red (RuR, 500 nmol/L) and ECO (5 nmol/L) with or without 1,25(OH)2D3 treatments., A well-known marker of OC, TRAP, was stained by leukocyte acid phosphatase kit (Sigma, USA). TRAP-positive cells with > 3 nuclei were considered OC.

VDR immunofluorescent staining was performed as reported previously (20-22). The BMMs were plated at concentration of 2 × 105 cells/well in 24-well plates) incubated with α-MEM supplement with 10% FBS for 5 days, and added M-CSF (10 ng/mL) and RANKL (50 ng/mL)-induced form OC. Cells on the chamber slides were rinsed by phosphate-buffered saline (PBS) gently. After fixing with 4% paraformaldehyde at room temperature for 10 min, cells were treated by 0.5% Triton X-100 for 20 minutes. Cells were then washed twice in PBS and blocked by 5% bovine serum albumin (BSA) for 20 minutes, followed by incubation with anti-VDR antibody (Santa Cruz Biotechnology, USA) at 4°C overnight. After washing by PBS, anti-mouse IgG conjugated with fluorescein isothiocyanate (FITC, Cell Signaling Technology, USA) and was incubated for 2 hours. Nuclei were visualized by staining with 2 µg.mL-1 4',6-diamidino-2-phenylindole (DAPI, Sigma, USA) for 15 minutes. The images were captured by DM2500 Fluorescence Microscope (Leica, Germany).

Statistical analysis was performed with a Student t test by using the SPSS software (version 19.0; IBM SPSS, Armonk, NY, USA). All data were displayed as mean ± standard deviation. P-values less than 0.05 and 0.01 represent a significant or very significant difference, respectively.

We first conducted immunofluorescence staining to examine VDR expression in the cultured cells. As shown in Figure 1, VDR expression was detected on day 5 in cells-treated with M-CSF and RANKL (Figure 1). VDR signals were present in the nuclei of OCPs (red arrow, and and mature OC (yellow arrow, Figure 1A). The intensity of VDR signals was particularly high in aggregated mononucleated OCPs (blue arrow, Figure 1A). In mature OC, the VDR signals were weaker and mainly present in the ruffled border (red asterisk, Figure 1A). These results suggest that 1,25(OH)2D3 can influence OC differentiation through VDR in particular in those mononucleated cells with high levels of VDR expression. Vitamin D is required for normal osseous development and maintenance of bone architecture integrity. Vitamin D, usually acquired from food and skin (23), is metabolized into an active form 1,25(OH)2D3 once it passes through the liver and kidney (24). The active form of 1,25(OH)2D3 then reaches its target tissues and organs by binding the serum DBP during circulation (25). Active 1,25(OH)2D3 binds to VDR with high affinity and selectivity. In this study, we detected the expression of VDR in BMM-derived mononuclear cells. Its expression levels decreased in mature OC. This result is consistent with the observation of low VDR expression in OC of bone tissue in patients with Paget’s disease (26), suggesting that 1,25(OH)2D3 may act on VDR-rich OCP and regulate their differentiation.

Active 1,25(OH)2D3 exerts its biological effects in its target organs such as the small intestine, bones, kidneys and parathyroid gland where it participates in Ca2+ homeostasis (27). The first characterized channel in calcium transmembrane transport, TRPV5, is involved in renal Ca2+ reabsorption (28). Furthermore, 1,25-(OH)2D3 (29) may also cooperate with PTH (30), estrogen (31), testosterone (32) and other hormones to regulate Ca2+ homeostasis through TRPV5. Our study showed that TRPV5 expression was dramatically increased in OC, which is consistent with the results reported by van der Eerden et al. (17). Additionally, our data showed that TRPV5 was significantly inhibited by 1,25(OH)2D3 at the early stage (day 1 and 2) during OC differentiation possibly by inhibiting expression of TRPV5. Similarly, Allard et al. (12, 33) also reported that 1,25(OH)2D3 significantly inhibits OC differentiation at the early stage of cell differentiation.

Meanwhile, RuR can significantly block the TRPV5 channel activity. Since the inhibition effects of RuR on TRPV5 is actually by suppressing the electrophysiological activity of the channel. As a result, the inhibitory effect on the expression level of TPRV5 may be due to inhibition of TRPV5 electrophysiological activity and thereby hindering the differentiation and maturation-related activity of OC and bone resorption capacity. The inhibition of OC differentiation may partially inhibit the activation of RANKL-NFATc1 by TRPV5. Furthermore, RuR and Eco act as TRPV5 blockers, can inhibit the activation of NFATc1 and reduce the level of OC differentiation and bone resorption activity through calcium oscillation. Several key proteins such as Ca II, V-ATPase, CTSK and TRAP are secreted into the extracellular bone resorption site where they degrade hydroxyapatite or bone organic matter, thus functioning in OC bone resorption. These proteins are considered important markers of OC (34, 35). Indeed, our study showed that Ca II, V-ATPase, CTSK and TRAP were detected after treatment with 1,25(OH)2D3, which could be further blocked by RUR or ECO. A similar observation was made by Lin et al. (36).

In summary, our study provides evidence that VDR and TRPV5 were expressed in OCP and OC, and that TRPV5 was important in OC differentiation. Active 1,25(OH)2D3 may inhibit OC differentiation by suppressing TRPV5 expression at the early stage. The study warrants further investigation of the precise mechanism by which VDR regulates TRPV5 expression.

Copyright © 2019, International Journal of Endocrinology and Metabolism. This is an open-access article distributed under the terms of the Creative Commons Attribution-NonCommercial 4.0 International License (http://creativecommons.org/licenses/by-nc/4.0/) which permits copy and redistribute the material just in noncommercial usages, provided the original work is properly cited.
download pdf 4.72 MB Get Permission (article level) Import into EndNote Import into BibTex
Number of Comments: 0