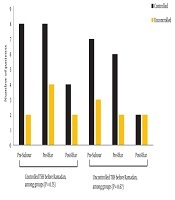 Fasting the month of Ramadan should be achieved by every pubescent Muslim unless they have an excuse. Fasting involves complete abstinence of oral intake throughout daytime. Patients who have hypothyroidism usually require levothyroxine (L-thyroxine) replacement, which is typically given on an empty stomach away from meals. Taking L-thyroxine replacement without feeding is challenging during the nighttime of Ramadan, in addition to being prohibited during daytime.

This study aimed to determine the best time of L-thyroxine intake during Ramadan.

No significant differences in TSH control were observed in patients taking L-thyroxine at pre-iftar, post-iftar, or pre-suhoor time in Ramadan.

The lunar month of Ramadan is one of the five obligatory Islamic pillars. It should be pursuit by every pubescent Muslim with few exceptions such as travelers, medically ill patients and pregnant women (1). Several millions of Muslims around the world fast the month of Ramadan every year, starting from dawn (suhoor) to sunset (iftar). During this period, they abstain from eating, drinking, smoking and sexual activity (1, 2).

People who fast Ramadan constitute a large number; thus, it is of interest to perform studies to examine the effect of fasting on various metabolic parameters (3).

Hypothyroidism represents the most common thyroid disorder with a higher frequency in women and the elderly. It has a broad spectrum of clinical presentations ranging from asymptomatic conditions to more serious and severe conditions such as myxedema coma (4).

Typically, levothyroxine (L-thyroxine) is the primary treatment for hypothyroidism, which has a low cost and few side effects. Optimally, L-thyroxine should be taken on an empty stomach at least 30 minutes before a meal (5). Unfortunately, a large number of patients fail to demonstrate a clinical and biochemical response, even though they take their typical dose. This poor response is mostly due to noncompliance with levothyroxine therapy (6). Several other factors have been highlighted by studies as causes of treatment failure such as celiac disease (7), lactose intolerance (8) and concomitant intake of food such as fiber-rich food, soy protein, grapefruit and coffee which interfere with L-thyroxine absorption (9, 10). In addition, some drugs are known to affect L-thyroxine absorption, leaving patients with a suboptimal response like calcium carbonate (11) and ferrous sulfate (12).

There is a great debate regarding the best timing for administration of L-thyroxine. Some studies have shown that there is no difference between taking L-thyroxine at bedtime or in the morning (13-15).

Up to our knowledge, there are very few studies conducted to examine the best time of L-thyroxine administration during Ramadan.

This study aimed to determine the best time of L-thyroxine intake during Ramadan.

This was a three-month prospective study conducted between April-June 2018. Patients attending the Faiha Specialized Diabetes, Endocrine, and Metabolism Center (FDEMC) in Basrah (Southern of Iraq) were enrolled in the study after providing consent. All the enrolled patients were already using L-thyroxine for hypothyroidism treatment. The inclusion criteria were adults with primary hypothyroidism.

Patients with central hypothyroidism, those who made dose adjustment during the time of the study and those with conditions known to affect either the thyroid function test or L-thyroxine absorption and metabolism like acute illness, severe chronic disease, celiac disease, intake of certain medications like ferrous sulfate, calcium carbonate, bile acid sequestrants, aluminum hydroxide antacids, activated charcoal, sucralfate, proton pump inhibitors, cholestyramine, colestipol, steroids, and certain materials like soya products were excluded from the study.

Ethical approval was granted from the Ethical Committee of the Basrah Health Directorate.

Table 1 summarizes the general characteristics of the studied patients. From a total of 50 patients enrolled in the study, 42 were females with a comparable female to male ratio among all the groups. There was no significant difference in the mean age, BMI, and TSH among the groups.

Table 2. Paired t-Test Comparison of the TSH Level Before and After Ramadan Within Each Study Group

bPaired t-test for difference in the TSH level before and after Ramadan within each group.

cThe ANOVA test for the mean difference in the TSH level among the groups.

Table 3. The TSH Control Before and After Ramadan According to the Time of L-Thyroxin Intake There have been contradictory results with regard to the best timing to take L-thyroxine in Ramadan. Some studies supported L-thyroxine intake at bedtime (13, 14), while other studies supported L-thyroxine intake during early morning fasting (16). Yet, some other studies found no timing difference in this regard (17). The optimum timing of L-thyroxine consumption in Ramadan is still undetermined. In our study, we did not find a significant difference in the effect of taking L-thyroxine at three different times during Ramadan, i.e. pre-iftar, post-iftar, and pre-suhoor. Moreover, we documented a non-significant overall reduction in the TSH level after Ramadan, which remained within the normal reference limit.

Two studies reported a significant rise in the TSH level after Ramadan in healthy subjects not taking L-thyroxine (18) and in hypothyroid patients consuming L-thyroxine (15). It appears that Ramadan fasting per se affects the TSH level, even in healthy people. Hadjzadeh et al. (19) in their review suggested to increase the dose of L-thyroxine routinely in Ramadan by 25 - 50 microgram per day. However, in our study, we demonstrated a non-significant reduction in the TSH level after Ramadan. Another interesting finding in our study was that the pre-suhoor group showed statistically non-significantly better results than the other groups in terms of the magnitude of TSH reduction before and after Ramadan.

Taking L-thyroxine on an empty stomach one hour before iftar is challenging for those who choose to fast. Intake of tablets or drinking water before the time of iftar will break the fast. Likewise, taking L-thyroxine one hour before suhoor may be not feasible for many people as waking up at that time is difficult and most people prefer to sleep until the time of suhoor. The sleep pattern is naturally disturbed in Ramadan because of the suhoor meal and thus adding extra-disturbance is regarded undesirable by patients. One study found that bedtime L-thyroxine intake was convenient and effective during Ramadan (20). In addition, two studies found that L-thyroxine intake was better at bedtime than in the morning (16, 17). Furthermore, early restoration of euthyroidism was documented in those taking L-thyroxine at evening time (17). Therefore, taking L-thyroxine after iftar may be more convenient to some patients during Ramadan. In our study, we did not document any difference in the intake time of L-thyroxine between the three studied groups. Hence, we recommend ingesting the tablet at any of the three specified times, namely before iftar, two hours after iftar and before suhoor, at patients’ convenience. This may offer patients flexibility in choosing the preferred time.

The strength of this study is due to the fact that it was carried out in a routine clinical setting and it compared L-thyroxine intake at three different times, which gave the patients as well as the investigators flexibility to choose the proper time.

There were some limitations in the study. First, the time interval was less than six weeks for TSH measurement in some patients. Second, the study design concentrated on patient convenience rather than on pharmacological properties of L-thyroxine. Third, symptomatology or quality of life measures were not considered. Fourth, the study was conducted in a single center. Fifth, no comparison was made in terms of the TSH profile with normal individuals. Finally, although we instructed the participants to take L-thyroxine at least two hours after iftar, we could not confirm neither the exact interval between iftar and L-thyroxine intake in the post-iftar group nor all the interferences of L-thyroxine absorption.

No significant differences were observed in maintaining or achieving new TSH control during Ramadan, whether L-thyroxin was taken at pre-iftar, post-iftar, or pre-suhoor time. Thus, different times of thyroxine intake during Ramadan are accepted.

Copyright © 2020, International Journal of Endocrinology and Metabolism. This is an open-access article distributed under the terms of the Creative Commons Attribution-NonCommercial 4.0 International License (http://creativecommons.org/licenses/by-nc/4.0/) which permits copy and redistribute the material just in noncommercial usages, provided the original work is properly cited.
download pdf 138.04 KB Peer Review Comments ( 151.22 KB) Get Permission (article level) Import into EndNote Import into BibTex
Number of Comments: 0