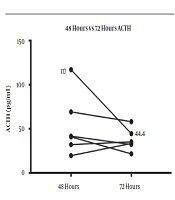 The recovery of hypothalamic-pituitary-adrenal (HPA) axis suppression following pharmacological doses of various steroids has been studied previously. However, no study has been conducted using the more commonly used 1-mg dexamethasone in the overnight dexamethasone suppression test (ODST). Hence, we aimed at evaluating HPA axis recovery after the 1-mg ODST.

This study aimed at investigating the pattern and time of recovery of the HPA axis following the 1-mg ODST in healthy subjects.

Ten healthy volunteers aged 18 - 40 years, BMI < 30 kg/m2, with neither exposure to steroids nor interfering drugs were included. The 1-mg ODST was performed, and the adrenocorticotropic hormone (ACTH) and cortisol samples were withdrawn at regular intervals. The serum cortisol of < 1.8 µg/dL was considered as HPA axis suppression, whereas the cortisol value equal to or more than baseline was deemed as recovery.

The complete recovery of the HPA axis occurs only 72 hours following the 1-mg ODST. ACTH begins to recover as early as 8 hours after the maximal suppression and diurnal rhythm of ACTH and cortisol resume 24 to 36 hours later.

Hypothalamic-pituitary-adrenal (HPA) axis suppression occurs most commonly due to exogenous steroid use (1). It is well known that the recovery of the HPA axis following glucocorticoid therapy depends on the type, route of administration, and a dose of the used drug and also the length of treatment. The degree of suppression and recovery of the HPA axis following the short- and long-term pharmacological doses of glucocorticoid therapy used in oncological and dermatological conditions has been widely studied (2-5). However, no study has yet been conducted using the 1-mg dexamethasone that is used more often in clinical practice to rule out hypercortisolism in the overnight dexamethasone suppression test (ODST). This test frequently is done on inpatients or as a part of preoperative investigations, and the patient is taken up for surgery within a couple of days. It may be worrisome that their HPA axis could remain suppressed when they undergo the stressful surgical procedure.

Hence, we conducted this study to understand the pattern and time of recovery of the HPA axis following the 1-mg ODST.

Ten healthy volunteers (6 men and 4 women) aged over 18 and younger than 40 years with a body mass index (BMI) of less than 30 kg/m2 and no previous exposure to any forms of steroids or native medications, as well as drugs that could interfere with the HPA axis assessment (anti-tuberculous therapy, antiepileptics, oral contraceptive pills) were included. This research was a pilot study; therefore, only healthy volunteers (ten healthy subjects) were enrolled in this study. After obtaining informed consent, they were subjected to a detailed history and clinical examination. The ambulatory subjects were explained that they could perform their normal duties throughout the study period.

The study protocol conformed to the ethical guidelines of the 1975 Declaration of Helsinki and was approved by the Institutional Ethics Committee of Sri Ramachandra Medical College and Research Institute, Chennai, India. Fasting sampling at 8 a.m. for serum cortisol and ACTH was done in all subjects at baseline. This was followed by the 1-mg ODST, where 1 mg dexamethasone tablet was given at 11 p.m., and the samples of ACTH and serum cortisol were measured on day 1 (8 a.m., 4 p.m.), day 2 (8 a.m., 4 p.m.), and day 3 (8 a.m.). Day 1 sample drawn at 8 a.m. was considered as 0 hour. A cut-off value of serum cortisol of < 1.8 mcg/dL was used to confirm HPA suppression. The recovery of the HPA axis was determined when the cortisol level following dexamethasone was equal to or greater than the baseline value. Additional samples were drawn if the serum cortisol level following ODST had not reached their baseline even after day 3. Six subjects were studied until day 4, and one subject was studied until day 14 following ODST. Serum Cortisol was measured by Chemiluminescence Immunoassay using DxI 800 Access® Immunoassay system (Beckman Coulter Inc., Brea, CA). Plasma ACTH was measured by the Electro Chemiluminescence method using the IMMULITE® 2000 Immunoassay system (Siemens Medical Solutions Diagnostic, CA, USA). Intra- and inter-assay coefficient of variation values were ≤ 10% and < 2.8% for ACTH and serum cortisol, respectively. Descriptive statistics were performed on a small data set.

The HPA axis was suppressed following administration of 1 mg dexamethasone in all subjects evidenced by a simultaneous sharp drop in ACTH (mean, 12.27 ± 4.25 pg/mL) and cortisol (mean, 0.63 ± 0.17 μg/dL) levels within the first 9 hours. However, the recovery pattern and time differed between ACTH and cortisol (Figure 1). Although ACTH and cortisol were initially suppressed in all subjects, ACTH showed an early increase within 8 hours in eight subjects, but cortisol exhibited a flat response in all subjects except for one case. After 24 hours, ACTH displayed an upsurge reaching the reference range (mean, 34.42 ± 17.99 pg/mL). Eventually, cortisol also showed a gradual increase alongside ACTH resulting in a tight coupling of graphs and reached the detectable range within 24 hours (mean, 3.96 ± 3.02 μg/dL). Both ACTH and cortisol levels had a small dip after 24 - 36 hours in eight subjects (mean ACTH, 23.84 ± 10.1 pg/mL and mean cortisol, 2.3 ± 2.5 μg/dL); however, they showed a steep rise after 48 hours. At the end of 72 hours, despite a fall, ACTH remained within the normal range (mean, 37.48 ± 12.44 pg/mL). This minor change within the range was probably driven by the high ACTH in subject 9 as shown in the slope graph (Figure 2) and was considered as a data-related issue. Nonetheless, cortisol continued to exhibit increasing levels and reached the baseline by 72 hours in all subjects except for one case (mean, 8.45 ± 3.32 μg/dL). The subjects’ clinical and biochemical data are shown in Table 1. The baseline 8 a.m. serum cortisol of the subject ten was 3.4 µg/dL. However, she was a normal and healthy case with no history of steroid use and no clinical evidence of adrenal insufficiency.

Table 1. The Subjects’ Clinical and Biochemical Data (N = 10)a Our results showed that ACTH and cortisol levels begin to recover 24 hours following the 1-mg ODST in healthy volunteers. However, they reached their baseline values only 72 hours following the 1 mg dexamethasone suppression. The nocturnal dip of the ACTH and cortisol was observed between 24 and 36 hours even before the complete recovery of the HPA axis. ACTH began to rise as early as 8 hours after the maximal suppression. This suggests the fact that HPA recovers earlier, which has been reported before. It is attributed to the probable early release of negative feedback at the level of hypothalamus and pituitary following the metabolism of oral dexamethasone. During pituitary-adrenal recovery following the short-term suppression with prednisolone (25 mg twice daily for five days), it has been shown that the peak cortisol response to physiologic ACTH release following hypoglycemia, as well as synthetic ACTH was reduced by 47% and 49%, respectively (6). Also, it was observed that the recovery of the adrenal component of the HPA response was delayed for 5 days following prednisolone therapy. This reconfirms our observation that ACTH recovery begins before cortisol recovery (6). The return of diurnal rhythm occurs before the complete recovery of the HPA axis evidenced by the small dip in ACTH and cortisol levels between 24 and 36 hours. Although the exact mechanism remains unclear, we propose that it could be due to the negative feedback of low cortisol levels on the corticotropin-releasing hormone (CRH), which is mediated through the hippocampal mineralocorticoid receptors (MR) (7). Cortisol preferentially binds to high-affinity MR (type I) in the hippocampus before the low-affinity glucocorticoid receptors (GR; type II) located in the hypothalamus and pituitary at lesser concentrations (8). The effect of MR is more pronounced during the early nocturnal period and prominent at the time of nocturnal nadir. In contrast, the GR effect predominates in the morning, when the cortisol level is at its highest level (9). Since the lower concentrations of cortisol could bind to the MR even before the complete recovery of the HPA axis, the nadir probably happened earlier in this study.

The complete recovery of the HPA axis, as defined by cortisol and ACTH reaching baseline levels, occurred only after 72 hours. This emphasizes the fact that cortisol levels in the first 72 hours following HPA axis suppression may not be in the optimal range. Therefore, it would be prudent to avoid any stressful intervention or surgery during this period, unless an emergency indication, where steroid cover may be considered. To the best of our knowledge, no study has yet been conducted on HPA axis recovery following the 1-mg dexamethasone; however, several studies are available on the recovery of HPA axis suppression with pharmacological doses of prednisolone (6), methylprednisolone (10), and dexamethasone (11). Since dexamethasone is the most potent among these drugs and is given at night to cause a greater suppression of ACTH, understanding about the recovery of the HPA axis with this drug is essential. The limitations of our study were the small sample size, less frequent sampling, and unavailability of the dexamethasone levels.

The complete recovery of the HPA axis occurs only 72 hours following the 1-mg ODST. ACTH recovery begins as early as 8 hours after the maximal suppression, and diurnal rhythm resumes after 36 hours.

The authors thank Sri Ramachandra University for the study grant and all the volunteers who participated in this study.

Copyright © 2020, International Journal of Endocrinology and Metabolism. This is an open-access article distributed under the terms of the Creative Commons Attribution-NonCommercial 4.0 International License (http://creativecommons.org/licenses/by-nc/4.0/) which permits copy and redistribute the material just in noncommercial usages, provided the original work is properly cited.
download pdf 813.76 KB Peer Review Comments ( 145.24 KB) Get Permission (article level) Import into EndNote Import into BibTex
Number of Comments: 0