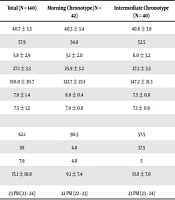 To investigate the independent association of chronotype with diabetes control.

In this cross-sectional study, 140 patients with type 2 diabetes were studied. The insomnia score was examined by a 7-item questionnaire. Also, chronotype was assessed by a 19-item questionnaire, and using the questionnaire, the patients were divided into three groups of morning, intermediate, and evening. This questionnaire has been developed for evaluating the preference for performing mental and physical activities at a special time of day. The Multivariate hierarchical analysis was applied for investigating the independent association of chronotype and glycated hemoglobin (HbA1c).

The fasting blood glucose and HbA1c levels were significantly different across all the three chronotype groups such that it had the highest value in the evening group and the lowest value in the morning group (FBS = 164.5 ± 34.1 mg/dL and HbA1c = 8.7% ± 1.7, in the evening group, and FBS = 132.7 ± 23.1 mg/dL and HbA1c = 6.9% ± 0.4 in the morning group, P < 0.001). The morning group had longer sleep duration and less insomnia than other groups. Results of the hierarchical regression analysis showed that the chronotype explained 28.4% of the variance of HbA1c. Results of the final model demonstrated that the chronotype had a relationship with HbA1c, independent of body mass index (BMI), time of going to bed, and insomnia score.

Evening chronotype is associated with poorer control of diabetes, independent of BMI and sleep variables.

Human beings have significant individual differences in their circadian rhythm. In the meantime, one of the most important differences is morning-evening preferences. The morning individuals tend to fall asleep in the early hours of the night and prefer the first half of the day to perform physical and mental activities. On the contrary, evening individuals tend to perform the activities in the evening and at night; these individuals fall sleep in the late hours of the night or at midnight. The third group, the intermediate individuals, is between these two ends of the spectrum (1). Determinants of chronotype are numerous. The circadian system, age, sex, genetics, geographical area of life, and unknown variables are among factors affecting the chronotype (2).

Most of the body’s hormones are affected by the circadian rhythm. The secretion of cortisol hormones, growth hormone, and prolactin is closely associated with sleep time, and changes in these hormones can cause metabolic effects (3, 4). The correlation of chronotype with the incidence and control of diabetes has been examined in a few studies. In a study in Finland (5), the evening chronotype was associated with a 2.5-fold increase in the incidence of type 2 diabetes. In other studies, the relationship between diabetes control and chronotype has been reported. In most of these studies, the evening chronotype is associated with higher HbA1c (6-9). In addition to the chronotype, sleep quality and sleep duration also affect metabolic health. Short nighttime sleep and poor sleep quality are associated with the increased probability of insulin resistance, risk of type 2 diabetes, as well as poorer glycemic control in patients with diabetes (10-13).

In most studies, the evening chronotype is associated with a shorter duration and lower quality of sleep (14, 15). Most of these studies have focused on sleep quality rather than insomnia score, and to the best of our knowledge, no study has evaluated specifically the association of evening chronothpe with poor control with respect to insomnia level. Considering the above-mentioned studies, both chronotype and sleep duration are associated with metabolic complications, and owing to the close relationship of chronotype with sleep duration, investigating the independent association of chronotype with poor control diabetes seems necessary.

To investigate independent (independent from sleep duration and insomnia score) association of chronotype with diabetes control.

In this cross-sectional descriptive-analytical study performed from February to July 2016, 140 patients with type 2 diabetes visiting an endocrine clinic were selected. The inclusion criteria were: age > 34 to < 46 years old, those whose diabetes had been diagnosed for at least one year ago. The exclusion criteria were using insulin, anti-depressants, antipsychotics, and patients with chronic diabetic neuropathy and nephropathy as well as nighttime shift jobs. The duration of the study was about nine months. The demographic data such as height, weight, years since the onset of diabetes, time of falling asleep, and sleep duration were extracted. The insomnia status was assessed by a 7-item questionnaire. This questionnaire has been validated in previous studies (16, 17), and the patients were placed in one of the three groups: No, moderate, and severe insomnia.

Chronotype was assessed by a 19-item questionnaire, and the patients were divided into three groups of morning, evening, or intermediate. In previous studies, the test alpha is reported equal to 0.78. The reliability of the test was reported as 0.77 (18). Fasting blood glucose and HbA1c values were measured after at least eight hours of fasting, using glucose oxidase and HPLC methods, respectively. The inter- and intra-assay were 2.96% and 0.51% and for glucose and 1.84% and 1.62% for HbA1c, respectively.

Statistical Analysis: The data were analyzed by SPSS 22 software (SPSS Inc. IL, Chicago, USA). Data were presented by the mean (SD) and frequency (%) for quantitative and qualitative variables, respectively. The normality of data was assessed and confirmed by one sample K-S test. One-way ANOVA and Kruskal-Wallis tests were used for comparison of data with normal and abnormal distributions, respectively. To investigate the relationship between HBA1c with chronotype and sleep-related variables, multivariate hierarchical analysis was applied for comparing with baseline characteristics. In the multivariate analysis, a three-step hierarchical strategy was used where chronotype was entered in the first step. In the second step, the baseline characteristics, including age, sex, and body mass index (BMI) were entered. In the third step, sleep variables (time of going to bed for sleep, sleep duration, and insomnia score) were entered. The qualitative variables were entered as indicators. The regression assumptions of residual normality, homogeneity of residual variances, residual independence, and co-linearity were assessed and confirmed using normal probability plot, residual versus predicted values plot, Durbin-Watson statistics (values between 1.5 to 2.5 as the acceptable range), and variance inflation factor (VIF < 5 as the acceptable values). All assumptions were fulfilled.

aValues are expressed as mean ± SD or median (interquartile range).

bSignificant difference between chronotypes of morning and intermediate, and morning an evening.

The results of the hierarchical regression analysis showed that chronotype explained 28.4% of HBA1c variance. In comparison to the morning chronotype, intermediate and evening chronotypes increased HBA1c by 0.59 and 1.82, respectively (Table 2). By adding age, sex, and BMI variables, the amount of the explained variance was only increased by 4.8%, which was significant, and by adding the sleep quality variables, the explained variance was increased by 10.9%. The results of the final model showed that evening vs. morning chronotype, BMI, and time of going to bed were significantly associated with HBA1c when controlling the other variables.

Table 2. Predictors of Changes of HbA1c in Multivariate Hierarchical Analysisa

In a study by Iwasaki et al. (6), which was performed on male Japanese workers, despite the similar calorie intake and physical activity in the evening and morning chronotypes, the levels of LDL and HbA1c were higher in the evening chronotype. Numerous factors can be involved in metabolic complications and poorer control of diabetic patients with an evening chronotype. The effect of chronotype on metabolic control can be caused by changes in the pattern, quality, and duration of sleep. People with evening chronotype usually suffer from sleep deprivation because they sleep late at night, and they have to rise earlier in the morning because of social issues (20). Inadequate sleep time is an effective factor in the incidence of diabetes (21) and poorer control of diabetes in patients with diabetes (22).

In our study, the frequency of insomnia, duration of sleep, and time of going to bed in the evening and intermediate chronotype was significantly different from the morning group. Although HbA1c was independently associated with the time of going to bed in multivariate hierarchical analysis, the evening chronotype was the significant independent predictor of HbA1c. In the study by Reutrakul et al. (9), the evening chronotype was associated with a higher level of HbA1c. In this study, in contrast to our work, there was no significant difference in sleep duration across chronotype groups. However, the frequency of poor sleep quality was higher in the evening group. In this study, the relationship between chronotype and HbA1c was independent of sleep quality. In our study, adding baseline characteristics, sleep duration, and insomnia level increased the explained variability of HbA1c by 10.9%.

Association of evening chronotype with poor glycemic control is multifactorial. Sleep deprivation increases the hypothalamic orexin system. The increased activity of orexin can increase the activity of the sympathetic system and secretion of cortisol, growth hormone, and as a result, increasing insulin resistance (23). Insufficient sleep is also associated with changes in leptin and ghrelin, which can lead to increasing the tendency to consume carbohydrates (24). The evening chronotype is associated with a 2-fold higher risk of eating disorders (25).

Changes in the distribution of calorie intake also may have some roles. Evening people usually eat dinner later and eat less breakfast or skip it (9, 26). In the study by Baron et al. (27), the calorie intake after 8 pm was associated with increased BMI independent from the time of falling asleep and the duration of sleep. During the day, glucose tolerance is reduced from morning towards evening hours. This phenomenon occurs due to the combined effect of reduced insulin secretion and increased insulin resistance in the later hours of the day (28). Therefore, the calorie intake in the later hours can cause poorer control of diabetes in the evening individuals with type 2 diabetes.

In addition to the above-mentioned points, the circadian system can have a direct effect on metabolic control in the body. Changes in body temperature, secretion of melatonin, cortisol, and growth hormone are associated with circadian rhythm, and the changes in the circadian cycle can directly lead to metabolic complications with an effect on the secretion pattern of these hormones (4). One of the interesting findings in our study was the higher frequency of evening chronotype than other studies. In our study, 41.4% of the participants had evening chronotype. In the study by Iwasaki et al. (6), the frequency of evening chronotype was only 10.9% in middle-aged men with type 2 diabetes. In the study by Yu et al. (19), only 5.9% of the participants had evening chronotype. The difference in this frequency can be attributed to cultural factors as well as social requirements. The main novelty of our study is evaluating the independent relationship of late chronotype with poor control diabetes with respect to insomnia level. Previous studies mainly have been focused on the association of poor sleep quality or chronotype with metabolic disturbances separately; very limited studies have evaluated the independent roles of poor sleep quality and chronotype in diabetes control; and to the best of knowledge, no previous study has evaluated the role of insomnia level in association with evening chronotype with poor control diabetes.

This study had some advantages and limitations. The main limitation of this study was the cross-sectional design of the study; therefore, no causality can be proven. The relationship between chronotype and diabetes control could be bidirectional (29). This means that in addition to the effect of chronotype on blood glucose control, the metabolic control could also affect the evening or morning preferences. Another limitation of this study was the lack of evaluation of differences in eating patterns, calorie intake, and amount of physical activity in chronotype groups that could justify our results more clearly.

Copyright © 2020, International Journal of Endocrinology and Metabolism. This is an open-access article distributed under the terms of the Creative Commons Attribution-NonCommercial 4.0 International License (http://creativecommons.org/licenses/by-nc/4.0/) which permits copy and redistribute the material just in noncommercial usages, provided the original work is properly cited.
download pdf 121.02 KB Peer Review Comments ( 182.89 KB) Get Permission (article level) Import into EndNote Import into BibTex
Number of Comments: 0