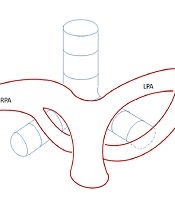 Hereby, the case of an 8-month-old girl diagnosed with partial anomalous left pulmonary artery (PLPA) is presented. Echocardiography and computed tomography (CT) examination demonstrated that the anomalous artery originated from the right pulmonary artery supplying the left upper lobe. PLPA is sometimes associated with tracheobronchial anomaly and congenital cardiovascular defects. A relationship between PLPA and Kabuki syndrome has also been suggested. Echocardiography and CT angiography can be used as accurate tools for identifying an anomalous left pulmonary artery and adjacent abnormal anatomic structures.

The patient was an 8-month-old girl with facial anomaly, low-set ears, and funnel chest accompanied by heart murmur. The cardiac murmur was classified as grade I/VI systolic murmur over the upper sternal border. Echocardiography revealed an abnormal branch formed in the middle segment of the right pulmonary artery (RPA) directed to the left side (Figure 1). Lack of prenatal examination record and fetal echocardiography prevented identification of congenital disorders. Cardiac computed tomography (CT) angiogram showed that the RPA gave off a branch arising from the posterior area that coursed left and upward, anterior to the left main bronchus (Figure 2A), supplying the left upper lung (Figure 2B). This was associated with a compression on the left main bronchus, resulting in focal segmental stenosis (Figure 3) and determined to be a PLPA. The main left pulmonary artery (LPA) originating from the main pulmonary artery supplied the left lower lobe. The RPA and aorta were located at the usual sites and displayed normal anatomy. The patient was followed up regularly in the outpatient department. Because there were no evident symptoms, surgical intervention was not considered. The patient’s pediatrician suggested genomic testing for Kabuki syndrome because of the patient’s facial anomaly and PLPA, but the parents refused. 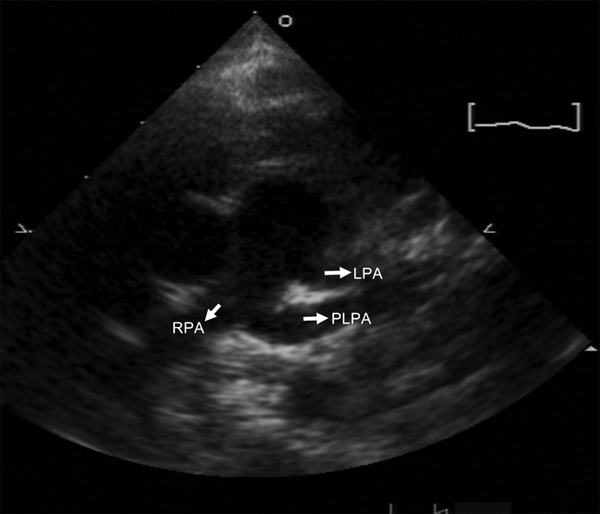 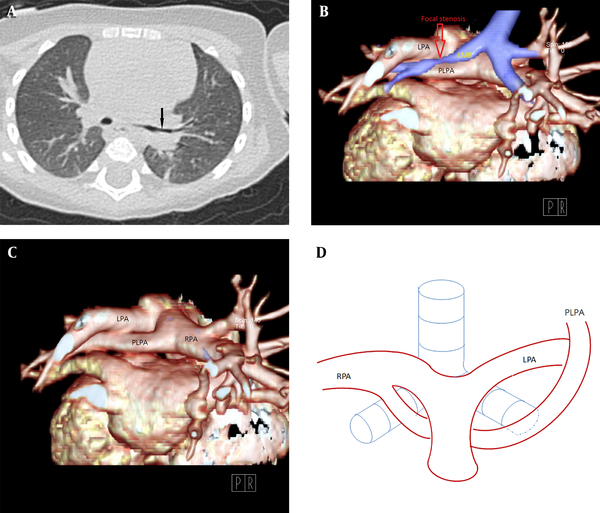 In general, the pulmonary artery originates from the sixth aortic arch in the embryogenic phase. The right arch turns into the right pulmonary artery (RPA), whereas the proximal segment of the left arch turns into the left pulmonary artery (LPA), and the distal segment develops into ductus arteriosus or ligamentum arteriosus. With regard to the cause of anomalous LPA, Jue et al. (1) hypothesized that the proximal left arch somehow fails to develop or is obliterated at an early stage, resulting in the supply to the left lung tissues being delivered by a collateral branch from the right arch. The collateral branch turns into the anomalous LPA if it remains. Another hypothesis (2) suggests that the anomalous LPA is actually the true LPA, but it develops into an aberrant connection and remains in close proximity to the ductus arteriosus. However, the above-mentioned theories cannot explain the existence of PLPA. Bamman et al. (3) purported that PLPA could be due to a connection error of the pulmonary artery. Distal pulmonary arteries originate from the vascular plexus around the lung bud, and a developmental error may occur such that the left primitive pulmonary artery communicates with the twigs from the plexuses of the left and right lung buds, instead of the plexus of the left lung bud in the normal manner. If this communication persists, an anomalous vessel can result that originates from the RPA and supplies the left lung. In previous studies, all cases of PLPA were reported to originate from the left lower lobe artery. The current study is the first to report a case of a left upper lobe artery, and the study conducted by Bamman et al. provides a hypothesis with a satisfactory explanation for our finding (3).

PLPA is sometimes accompanied by tracheobronchial anomaly. There have been two reported circumstances including tracheal bronchus (3, 4) and bridging bronchus or horseshoe lungs (4-6). Unlike a typical pulmonary sling, PLPA only rarely causes tracheobronchial stenosis. Although the course is between the esophagus and trachea, the level is usually below the carina and does not lead to vascular compression. In addition to congenital tracheobronchial hypoplasia, Collins et al. (7) reported a case of diffusely smaller left lung bronchi and a lower perfusion state in the left hemi-lung, as noted on magnetic resonance imaging. This finding may suggest that the state of hypoperfusion results in hypoplasia of the affected bronchial tree.

Another associated abnormality of PLPA is congenital cardiovascular defect, which could include ventricular septal defect, atrial septal defect, aortic coarctation, tetralogy of Fallot, total anomalous pulmonary venous return, and hypoplastic left heart syndrome. Such associations are suggestive of Kabuki syndrome, as reported previously by some studies (6-8). Kabuki syndrome consists of characteristic facial features, skeletal abnormalities, dermatoglyphic anomalies, and developmental and mental retardation. Most importantly, multiple congenital cardiac defects are also typically noted in reports of PLPA. To date, at least 30 cases of PLPA have been reported in the English research literature (Table 1) (3-15). Among them, Kabuki syndrome was confirmed or suspected in six patients, including the patient in the current case.

Because Kabuki syndrome is a very rare genetic disorder, its etiology remains unclear. Some studies have reported that it may be caused by a sporadic gene mutation, although not all cases of Kabuki syndrome have the same findings. PLPA could be a manifestation of cardiac defect in Kabuki syndrome. Although the patient in the current study had facial anomaly, a definitive diagnosis of Kabuki syndrome could not be made because there was no further genetic analysis and no other clinical features observed.

PLPA is basically left unaltered in all reported cases because the vascular anomaly itself does not result in a cyanotic condition or respiratory distress. Anatomical repair of the associated cardiac and respiratory system defects is a key factor in the patient’s prognosis. Obstructed left heart lesions, such as hypoplastic left ventricle, coarctation of the aorta, and mitral valve hypoplasia, are indications for corrective surgery in patients with PLPA and seem to be more frequently accompanied by Kabuki syndrome (6).

In conclusion, PLPA is an exceedingly rare congenital vascular anomaly. It is likely a result of a developmental mistake of the LPA in the embryogenic phase, and it develops into an anomalous left lower lobe artery in most cases. This is the first case report of an anomalous left upper lobe artery. This condition could be associated with tracheobronchial anomaly or more often, with congenital cardiovascular defect or anomaly. Kabuki syndrome should be suspected in cases with multiple cardiovascular defects or anomalies. Echocardiography is the primary imaging technique for detecting vascular abnormalities and is used to determine the complete anatomy of the anomalous artery. The adjacent tracheobronchial abnormality can be detected on CT angiography, which is imperative if surgical correction is required.