Primary Yolk Sac Tumor of the Endometrium with MRI Findings: A Case Report 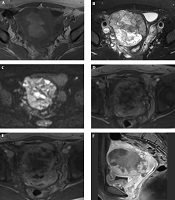 Primary yolk sac tumor (YST) of the endometrium is a very rare malignant germ cell tumor, primary YST of the endometrium with detailed magnetic resonance imaging (MRI) and contrast-enhanced MRI (CE-MRI) findings have not yet been reported in the English literature. We report a 40-year-old woman presenting with irregular lower abdominal pain and dysmenorrhea for more than 5 months. MRI showed a lesion in the right side wall of the uterus. Postoperative pathology and immunohistochemistry confirmed the diagnosis of primary YST of the endometrium with the International Federation of Gynecology and Obstetrics (FIGO) system staging of IV. The signal of the tumor was complex and lacked specific characteristic. Diffusion-weighted imaging (DWI) showed that the lesion is diffuse limited, the average apparent diffusion coefficient (ADC) value of the solid component was 0.735 × 10-3 mm2/s. CE-MRI showed that the irregular lesions presented uneven and mild enhancement in the arterial stage, and continued to strengthen in the venous phase, and strengthened close to the myometrium in the delayed phase. Primary YST of the endometrium should be considered if MRI scans show an irregular lesion in the myometrium with high level of alpha-fetoprotein (AFP).

Primary yolk sac tumor (YST) of the endometrium is very rare, and only 15 cases have been reported (1, 2). This case report is the 16th case in the world. We first report the case of primary YST of the endometrium with detailed magnetic resonance imaging (MRI) and contrast enhanced (CE) MRI findings.

The patient was a 40-year-old married woman with irregular lower abdominal pain and dysmenorrhea for more than 5 months. The patient felt that the lower abdominal pain was worse than before recently, accompanied by frequent urination. Tumor marker evaluations revealed a high level of AFP (1210 ng/mL), premenopausal Roman index (PI) (40.5) and human epididymis protein 4 (HE4) (121.2 pmol/mL). The levels of carbohydrate antigen (CA) 125 (23.95 u/mL), CA 19 - 9 (11.11 U/mL), and carcinoembryonic antigen (CEA) (1.48 ng/mL) were normal.

Pelvic MRI and CE-MRI was performed using the Siemens Avanto 1.5 T system before surgery. MRI showed that the uterus was enlarged, the lesion located in the right side wall of the uterus, and the boundary was unclear, the serosal layer of the anterior wall of the uterus was unclear, and the tumor size was 7.7 cm × 6.6 cm × 8.2 cm. T1 weighted imaging (WI) showed the lesion is equal and slightly higher signal (Figure 1A). T2WI was equal, slightly lower and slightly higher signal (Figure 1B). Diffusion weighted imaging (DWI) indicated that the lesion was diffusion restricted (Figure 1C), and the average apparent diffusion coefficient (ADC) value of the solid component was 0.735 × 10-3 mm2/s, partially broke through the serosa layer, invaded the right side wall of the vagina and the paravaginal space, and the right uretera was dilated. CE-MRI showed that the lesions showed uneven and mild enhancement in the early stage (Figure 1D), and continued to strengthen in the venous phase (Figure 1E), and strengthened close to the myometrium in the delayed phase (Figure 1F). No enlarged lymph nodes were present in the pelvis. 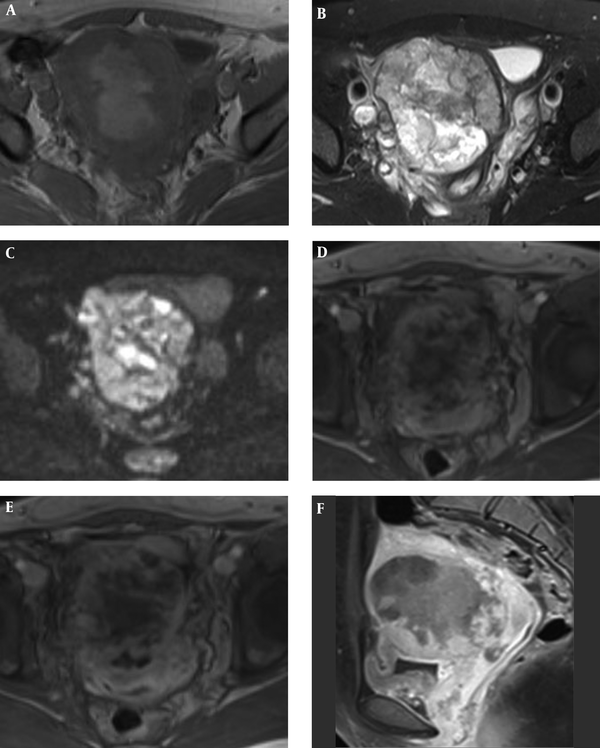 This case is in stage IV of FIGO (International Federation of Gynecology and Obstetrics). Postoperative pathological examination showed tumor in the right side of the uterus (Figure 2A). Tumor cells are dense and have an atypical network structure. Some tumor cells grow around the blood vessel wall, invade the surrounding muscular tissue, accompanied by a large amount of bleeding and necrosis (Figure 2B). The tumor cell nuclei are deeply stained, the nucleoli are obvious, and the nuclear membrane is irregular (Figure 2C). 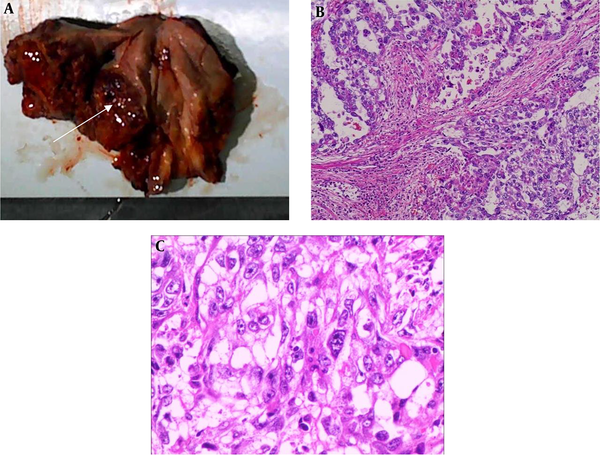 YST is a rare tumor in germ cell tumors. It most commonly occurs in the sacrococcygeal region, mediastinum, brain, vagina and retroperitoneum. Metastasis also occurs through the blood and lymphatic system. Primary YST of the endometrium is very rare (3). This case originated in the endometrium, was in stage IV of FIGO, and invaded the bladder and para-uterine structures.

T1WI and T2WI images of the pelvic MRI did not show specific findings, DWI image shows diffusion restricted area in the lesion. Hu et al. reported one case with MRI findings (4). The shape and signal of the tumor were similar to this case. They both show a place in the uterine muscle wall with complex signal, but no CE-MRI findings were reported in their case report. In this case, CE-MRI showed that the solid component of the mass appears as continued enhanced, the degree of enhance is close to the myometrium in the delayed phase.

In this case, MRI and CE-MRI imaging findings showed bilateral uterine, bladder and vaginal wall invasion, negative bilateral ovary and bilateral fallopian tube involvement is compatible with pathological assessments and extent of invasion determined after surgery. Typical pathology slice image of YST can be expressed as transparent body, papillary and gland-like structure, and the Schiler-Duval (S-D) body is a typical feature (5, 6). The tumor cells are arranged in a single layer or a complex layer surrounding the blood vessel. A set of surrounding or endodermal sinus-like structures was formed around the blood vessels. This case was finally diagnosed as primary YST of the endometrium. YST can produce AFP. The measurement of AFP can be used for preoperative diagnosis and detection of metastasis and recurrence after treatment (7, 8). In this case, AFP increased significantly, reaching 1210 ng/mL, and AFP dropped to 2.42 ng/mL after surgery. Review AFP was 1.43 ng/mL after 2 years. However, Song et al. reported a normal AFP level in a 38-year-old woman with primary YST of the endometrium (9). We need more sample collection and data for further research.

The clinical manifestation of primary YST of the endometrium is not specific. There are currently no uniform standards and regulations for the treatment of YST (10, 11). Fujita et al. (12) reported that 41 patients with ovarian endodermal sinus tumors underwent conservative surgery, followed by chemotherapy, with a 5-year and 10-year survival rate of approximately 80%. Rossi et al. (13) reported a case of a 30-year-old woman who only had a uterus removed and retained bilateral attachments, and survived after 6 years. No tumor recurrence was seen after 2 years of follow-up. We will continue to follow up this case.

In summary, primary YST of the endometrium is a rarer malignant germ cell tumor with lack of specificity in clinical manifestations. Detection of AFP levels is important for diagnosis and postoperative follow-up, and the final diagnosis still requires pathology and immunohistochemistry. At present, there is no unified diagnosis and treatment guideline for primary YST of the endometrium. We also believe that further researches and assessments are necessary.