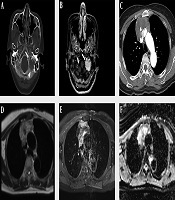 Primary Thymic Mucinous Adenocarcinoma: A Case Report Focusing on Radiological Findings and Review of the Literature

Primary thymic adenocarcinoma is a rare disease. Although the incidence varies according to literature, it accounts for about 1.6% to 3.98% of thymic carcinomas (1, 2). Mucinous adenocarcinoma is one of its subtypes. So far, 27 cases have been published in the English literature.

Due to the rarity of the disease, clinical findings are not well known. Previous studies have mainly reported its pathological findings. Few reports have focused on imaging findings. The known computed tomography findings are a large anterior mediastinal mass with cystic change and invading adjacent major vessels (3-5).

Among thymic adenocarcinomas, the prognosis for the mucinous subtype is poor (6). According to previous literature, patients undergoing complete resection may survive for more than 5 years. In many patients, however, adjacent tissue infiltration is observed at the time of diagnosis and that leads to poor prognosis (7).

We present a case of a primary thymic mucinous adenocarcinoma patient with radiological and pathological findings. We also reviewed and analyzed previous literature focusing on radiologic findings of primary thymic mucinous adenocarcinoma. In addition, we analyzed magnetic resonance imaging (MRI) findings that were rarely introduced in the previous literature, and tried to find imaging findings that could help diagnose this disease.

A 60-year-old woman visited the emergency room due to dysarthria for 10 days. The patient had no notable medical history except for hypertension. On physical examination, the patient’s tongue deviated to the left. Brain computed tomography (CT) scan and MRI with contrast enhancement (CE) were performed to identify the cause of dysarthria. On CT scan, an osteolytic lesion of about 2.5 cm in size was found in the left lateral part of the occipital bone and petrous apex (Figure 1A). The lesion showed homogeneous enhancement in CE MRI (Figure 1B). Diffusion weighted imaging (DWI) showed high signal intensity (SI) and low apparent diffusion coefficient (ADC) values. The first differential diagnosis was metastasis. The other differential diagnosis was primary solid malignant tumor. Except for the above findings, no abnormalities were found in the brain parenchyma or blood vessels. 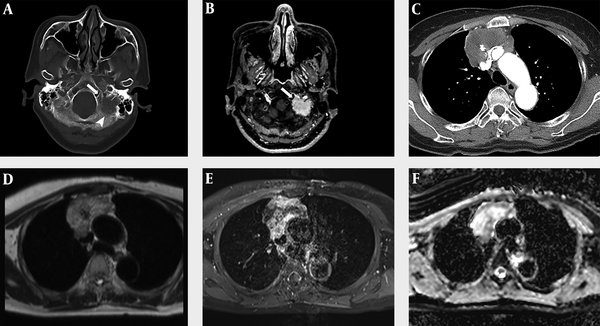 A 60-year-old woman with primary thymic mucinous adenocarcinoma presented with dysarthria due to metastasis to the skull base. A, In the brain CT with bone window setting, an osteolytic lesion (arrowhead) of about 2.5 cm in size is observed in the left lateral part of the occipital bone and petrous apex, and this lesion is invading the left hypoglossal canal (arrow). B, In contrast-enhanced (CE) brain MRI, there was approximately 2.5 cm homogeneous enhancing lesion in the left lateral part of occipital bone and petrous apex, invading the left hypoglossal canal (arrow). C, A heterogeneous enhancing mass of about 6.9 cm was observed in CE Chest CT, with central low attenuation and focal calcification. D-E, Chest MRI showed that this mass had a heterogeneous high signal intensity in the T2-weighted image (D), heterogeneous enhancement in the CE T1-weighted image, and invasion of adjacent superior vena cava and both innominate veins. F, The peripheral portion of this mass shows a low apparent diffusion coefficient value.

To find the primary lesion, the patient underwent additional chest and abdominal CT with CE and positron emission tomography-CT (PET-CT). Abdominal CT revealed no evidence of primary tumor. However, chest CT revealed a mass of about 6.9 × 6.4 × 4.9 cm in size in the anterior mediastinum. The mass showed enhancement in the periphery of the lesion, low attenuation in the center, and focal calcification. The mass was in close contact with the adjacent superior vena cava (SVC) and the left innominate vein. Invasion was suspected due to irregularity of the margin (Figure 1C). The first differential diagnosis was invasive thymoma, considering that a large tumor could be seen as a heterogeneous mass due to cystic or necrotic degeneration. In addition, calcification might be present throughout a tumor. Another differential diagnosis was thymic carcinoma. This is because thymic carcinoma is more likely to metastasize than invasive thymoma and invade adjacent structures. It may contain calcification in a large size of tumor. Another differential diagnosis was thymic germ cell tumor due to combination of soft tissue and calcification. PET-CT showed no abnormalities except for an avid 18F fluorodeoxyglucose (FDG) uptake in the mass and a nodule observed in the anterior mediastinum and skull base, respectively. 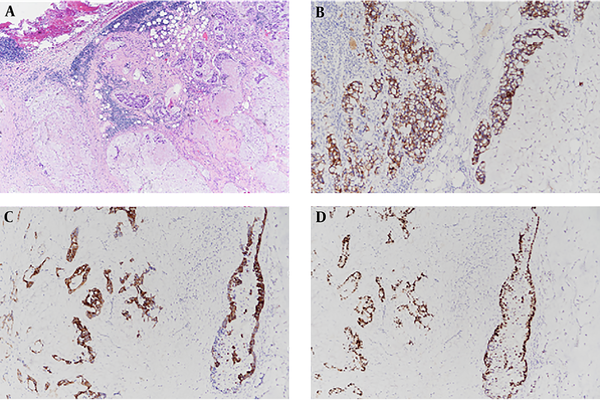 Chest CE MRI was performed to evaluate resectability before surgery. A mass with intermediate SI in T1-weighted image (T1WI), heterogeneous high SI in T2-weighted image, and heterogeneous enhancement in contrast-enhanced T1WI was observed in the anterior mediastinum. In the DWI, the peripheral portion of the lesion showed high SI and low ADC value. Dark SI in the mass was observed. It correlated with calcification seen in CT. The mass showed irregular boundaries with SVC and both innominate veins, suggesting invasion (Figure 1D and F).

Surgical findings revealed an irregular, hard mass in the anterior mediastinum with invasion of the pericardium, left innominate vein, and SVC. Although surgical resection was attempted as much as possible, complete resection was not possible due to severe adhesion of SVC. Surgical tissue was also diagnosed as mucinous adenocarcinoma. Invasion was observed in mediastinal fats around the mass. Finally, the patient was diagnosed with primary thymic mucinous adenocarcinoma.

The patient underwent adjuvant radiotherapy in the mediastinal area after surgery and steroid and fractionated stereotactic radiotherapy for metastatic lesions of the skull base. Postoperatively, the patient continued chemotherapy. However, metastases were found in the sternum and ribs in the bone scan performed 4 months after surgery. Multiple metastatic lung nodules were developed in chest CT. The skull base lesion did not change. One year after the surgery, metastases progressed despite continued chemotherapy.

Up to date, there were very few radiologic reviews of primary thymic mucinous adenocarcinoma. Most cases of primary thymic mucinous adenocarcinoma are reported in pathology journals. CT figures and descriptions were found in 11 of 27 cases reported in the English literature (3-7, 11-16). We analyzed a total of 12 cases of CT images, including the previous 11 cases and our case. Information that could not be identified with a given CT image such as tumor size or component was analyzed based on the description shown in the literature. We classified CT images by tumor composition (solid predominancy: > 50% of solid portion; cystic predominancy: > 50% of cystic portion), enhancement pattern (homogeneous or heterogeneous), presence of calcification, and adjacent invasion (present or not).

For a total of 12 cases, their mean age was 59 years (range, 28 - 79 years). The male-to-female ratio was 1: 2 (4 men and 8 women). The average maximal diameter of tumor was 9.2 cm (range, 5.6 - 14.5 cm). Eight (67%) of these 12 cases showed solid predominancy while four (33%) cases showed cystic predominancy. All (100%) tumors had a heterogeneous enhancement pattern. No calcification was observed in seven (58%) cases. Calcification was observed in five (42%) cases. Adjacent tissue invasion was observed in seven (58%) cases at the time of diagnosis. It was not observed in five (42%) cases. The association between thymic mucinous adenocarcinoma and thymic cyst has been observed in several reports (4-6, 9, 10, 17-19). Thymic cyst was identified in six (50%) of 12 cases. Clinical and radiologic findings of these 12 cases of primary thymic mucinous adenocarcinoma are shown in Table 1.

MRI findings were rarely described in previous literature. In our patients, there was an intermediate SI in the T1-weighted image and a heterogeneous high SI in the T2-weighted image, which were similar to SI of the mucinous component of mucinous adenocarcinoma occurring in the abdomen or pelvic cavity. This correlated with the low attenuation area observed in CT. However, this finding is not specific for mucin. So more research is needed on the findings of MRI images, including image-pathology correlation.

Histologically, primary thymic mucinous adenocarcinoma has malignant tumor cells in nests, tubules, and cribriform structures floated in pools of extracellular mucin (4). Immunohistochemical staining is important for determining the origin of the tumor and for distinguishing it from thymic mucinous adenocarcinoma and other thymic carcinomas. CD5 is a widely known thymic origin marker. About 70% of thymic carcinomas are positive for CD5 (11). CK7, CK20, and CDX-2 are useful markers for distinguishing mucinous and other subtypes of thymic carcinoma (5). However, they cannot distinguish between primary and metastatic lesions. They are also positive in tumors of pulmonary, gastrointestinal tract, and ovary origins. MUC (Mucin) family proteins are evaluated as markers for thymic mucinous adenocarcinoma in limited studies. In addition, markers such as TTF-1 can be used. TTF-1 is a primary pulmonary adenocarcinoma-specific marker. It is negative in thymic tumors. Our case showed positive staining for CDX2, CK7, CK20, and MUC2, indicating mucinous type of tumor. Our case showed negative staining for TTF-1, meaning that the tumor was not of pulmonary origin.

In conclusion, although primary thymic mucinous adenocarcinoma is a rare disease, it should be considered if a large mass with a heterogeneous enhancement pattern is accompanied by adjacent tissue involvement, associated thymic cyst, or calcification. Histologically abundant extracellular mucins and immunohistochemical stains are important for its diagnosis. The prognosis differs depending on whether complete resection is possible. In general, the prognosis is poor. Therefore, early diagnosis is important. Further studies on radiology findings including MRI findings are needed.