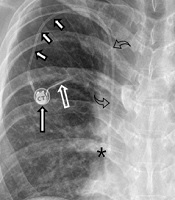 A totally implantable venous access port (TIVAP) is an essential component of care for oncology patients. Conventional placement of the TIVAP is performed through the internal jugular vein or the subclavian vein using a tunneled catheter, which involves creating two incisions. However, the conventional technique has several potential limitations. To address these limitations, a single-incision technique without a second incision or subcutaneous tunneling has been extensively tested since first being introduced by Glenn in 2007.

The purpose of this study was to evaluate the technical success, clinical outcomes, and complications of the single-incision technique for the placement of TIVAPs.

Between January 2013 and June 2017, 182 TIVAPs were placed by a single-incision technique in 175 patients, including 79 men and 96 women (mean age, 62.4 years; range: 20 - 88 years). Electronic medical records were retrospectively reviewed to obtain patient data, outcomes, and complication rates.

The single-incision technique for TIVAP via the axillary vein was safe and efficient with high technical and clinical success rates. This new technique may be a good alternative to conventional techniques.

A totally implantable venous access port (TIVAP) has become an essential tool for patients who require long-term venous access (1-4). Conventionally, placement of the TIVAP is performed through the internal jugular vein (IJV) or the subclavian vein by creating a tunnel between the venipuncture site and port pocket in the infraclavicular area. However, the conventional technique has several potential limitations associated with the creation of two incisions, such as a risk of bleeding, patient dissatisfaction associated with discomfort and esthetic disadvantages (5, 6). To overcome these limitations, the single-incision technique for placing TIVAPs has been extensively tested since 2007 (4-8).

The purpose of this study was to evaluate the technical success, clinical outcomes, and complications of the single-incision technique for the placement of TIVAP.

The institutional review board of our institution approved this retrospective study protocol. The requirement for written informed consent was waived due to the retrospective nature of the study. Electronic medical records and radiographic images of TIVAPs performed from January 2013 to June 2017 were retrospectively reviewed. Patients who underwent placement of a TIVAP by single-incision technique via the axillary vein were included in this study. Exclusion criteria were: (1) placement of the TIVAP by the conventional technique and (2) placement of the TIVAP via peripheral veins in the upper extremity.

Before the procedure, written informed consent was obtained from all patients. The right axillary vein was primarily used. Under local anesthesia, an oblique incision was made for the pocket in the infraclavicular area, and the port pocket was created by blunt dissection of subcutaneous tissue. Under ultrasound guidance, the axillary vein was punctured with a 7-cm x 21-G micropuncture needle (MAK Mini Access Kit, Merit Medical System, South Jordan, UT, USA). The needle tip was advanced diagonally upward to the axillary vein. The target vascular entry site of the puncture needle was lateral to the lateral margin of the first rib, which reduced the risk of pinch-off syndrome. An 0.018-inch hairy guidewire was inserted through the puncture needle, followed by a 5-Fr x 10-cm coaxial introducer. A 0.035-inch guidewire was then advanced through a 5-Fr introducer to the superior vena cava (SVC) and into the inferior vena cava, thereby confirming venous access. A peel-away sheath was inserted into the axillary vein. The port catheter was introduced through a peel-away sheath, placing the catheter tip at the junction of the right atrium and SVC or within the cephalic portion of the right atrium. The TIVAP chamber connected to the catheter tip was implanted in the port pocket. Port patency was confirmed by aspiration of blood and non-problematic flushing with normal saline. A final fluoroscopic image verified the correct positioning of the catheter tip and the course of the catheter (Figure 1). Heparin solution (100 units/mL) was locked into the port chamber and catheter lumen. Post-procedural chest radiography was performed to evaluate the port, catheter, and any complications related to the procedure. 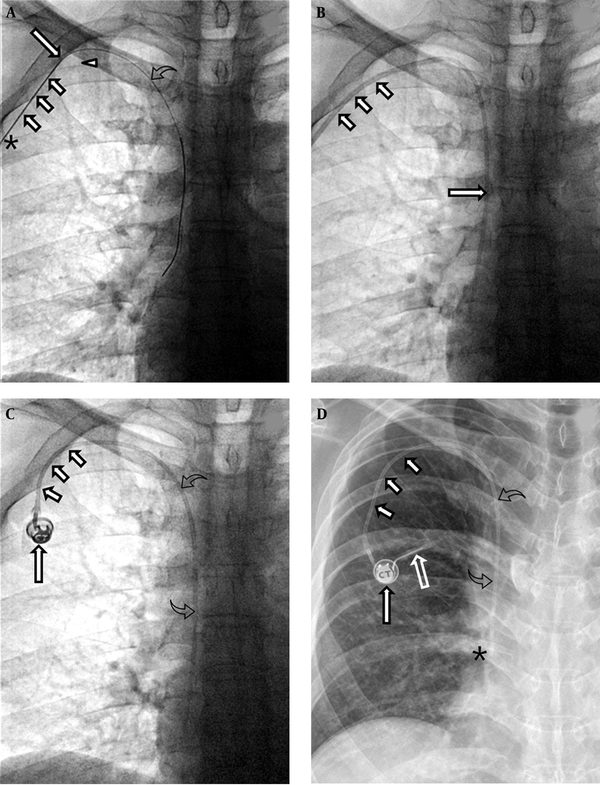 A total of 289 TIVAPs were implanted in 277 patients, including 182 TIVAPs implanted in 176 patients by the single incision technique, 103 TIVAPs implanted in 97 patients by the conventional technique, and four TIVAPs implanted in four patients via peripheral veins (right great saphenous, right basilic, left basilic, and right brachial veins). The demographics and underlying diseases of these 176 patients are shown in Tables 1 and 2. The numbers of ports used were as follows: 134 Celsite Discreet ports, 46 Districath ports, and two PowerPort ports. Technical and clinical success rates of the single incision technique were both 100% (182/182). At the study endpoint, 42 of 182 TIVAPs were removed, 53 were in patients who had died, and the remaining 87 TIVAPs were in outpatients or inpatients. The causes of removal of 42 ports in 40 patients are described in Table 3.

The conventional technique has several potential disadvantages associated with the creation of two incisions: difficulty in advancing the tunneling devices, risk of bleeding, pain at the tunneling site, and incorrect measurement of the catheter length. These problems can lead to catheter malfunction and venous thrombosis. Post-procedural problems include discomfort in the subcutaneous tunnel overlying the clavicle with neck movement or swallowing, and esthetic disadvantages. In patients with a low body mass index, it is difficult to create a subcutaneous tunnel in deep subcutaneous tissue (4-7).

To overcome the limitations of the conventional technique, a single-incision technique through the IJV, axillary vein, and subclavian vein has been used for TIVAP placement. The advantages of the single-incision technique include elimination of a second venotomy incision, reduction of bleeding risk, shortened procedure time, fewer infections related to the neck incision, esthetic advantages, and reduction of postoperative discomfort by avoiding the requirement for a neck dressing (4-8, 14). The limitations of the single-incision technique via IJV are limited subcutaneous tunnel length based on needle length, a potentially inaccessible IJV depending on the patient’s anatomy or available needle length, and difficulty in advancing devices with a hairpin-turn shape (6).

In this study, the overall complication rate was 13.74% (25/182). Among the total 25 complications, three occurred in the periprocedural early phase (1.65%), two in the early phase (1.10%), and 20 in the late phase (10.99%). There were no major complications that resulted in prolonged hospitalization, permanent sequelae, or death (9, 10). Considering the low periprocedural complication rate and the absence of any major complications, the single-incision technique is similar in safety to the conventional technique. The incidence of catheter-related infection was 5.49% in this study; the incidences of catheter-related infection were reportedly 1.7% - 8.8% in other studies (8, 15-20). In the present study, catheter-related infections were noted in the late phase of the follow-up period, which might have been due to patient factors (e.g., weakened immune status of patients with malignant disease, ongoing chemotherapy, and comorbidities), rather than differences between the two techniques with respect to implantation of the TIVAP (11, 20, 21). The incidence of pocket infection in this study was 2.20%, which was comparable to the rate reported in a previous study (range: 2.6% - 9%) (6).

The right IJV is the preferred access site for the insertion of central venous catheter because of its high technical success rate and low complication rate (22). However, in most oncology patients, thrombosis and central vein stenosis are occult in nature and respond well to anticoagulation and/or catheter removal (4). In the present study, symptomatic venous thrombosis occurred in one patient (0.55%), which was the only major complication observed within 30 days after the procedure. The incidence of thrombosis was lower than that reported in previous studies (range: 0.67% - 8.4%); it was also lower than the threshold suggested (6%) in quality improvement guidelines (8, 9, 23).

The limitations of this study were as follows. First, due to the retrospective nature of this study, complication rates could have been documented in association with the type of port, or the use of prophylactic antibiotics. Some patients were excluded because they had been lost to follow-up or transferred to other hospitals, which may have resulted in under- or overestimation of the complication rates. Second, no comparisons of the outcomes and complications were performed between the single-incision and conventional techniques. To fully document the procedure time, outcomes, and complications, further randomized prospective research studies comparing the two techniques are required. Third, patient satisfaction was not analyzed in terms of post-procedural pain, cosmetic issues, or any discomfort related to the procedures. Following the use of the single-incision technique, no patients reported discomfort over the clavicle or lower neck, which is a frequent complaint of patients who undergo TIVAP using the conventional technique.