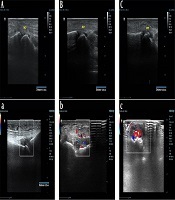 The goal of this study was to explore the role of US7 score in predicting the recurrence of RA patients with disease in clinical remission.

Totally, 186 RA patients in clinical remission were recruited and their demographic and clinicobiologic characteristics were collected. The US7 score and disease activity score in 28 joints (DAS28) were recorded as baseline indicators for a 1-year follow-up. Patients were divided into the recurrence group and non-recurrence group according to their recurrent results. The clinical indicators and US7 scores before the follow-up were compared and analyzed between the two groups. Kaplan-Meier and univariate COX regression analysis were used to analyze the effect of US7 score on the recurrence of RA. Receiver-operating characteristics (ROC) curves were established to evaluate the predictive accuracy of DAS 28 and US7 score for the outcome of RA.

The disease activity of rheumatoid arthritis (RA) is routinely evaluated by disease activity score in 28 joints (DAS28) (1). The goal of RA treatment is to maintain the disease activity in clinical remission (Disease Activity Score [DAS]28 ≤ 2.6) because a complete cure is difficult to achieve (2). However, according to a study performed by Peluso et al. (3), about 47.1% of RA patients would recur after remission. It will result in bone erosion and disability if the recurrence is not controlled in time (4). Nowadays, the synovial hyperplasia could be easily observed by grayscale ultrasound (GSUS), and the pathogenic vascularization could be evaluated by color Doppler ultrasound (CDUS) (5). Some studies have reported that synovial inflammation is still detected in patients with RA in clinical remission (6-8), which is called subclinical synovitis. RA patients with disease in remission are more likely to recur if the subclinical synovitis exists (9).

Seven-joint ultrasonic score (US7 score) proposed by Backhaus et al. (10) is currently the most convenient and economical ultrasonic examination for RA. Recent reports showed that the US7 score was positively correlated with DAS28, suggesting that it could effectively assess the disease activity of RA as well (11, 12). It is worth noting that the US7 score allows a more accurate assessment of subclinical synovitis because it can effectively evaluate the synovial inflammatory condition, which would lead to a more accurate prediction of the prognosis of RA patients. However, few studies explored the role of US7 score in predicting the prognosis and reducing the recurrence rate of RA patients with disease in clinical remission.

The aim of the present study was to evaluate the efficacy of RA treatment by the US7 score, and to explore its predictive role in the prognosis of RA patients with disease in remission, especially those with subclinical synovitis.

This was a longitudinal observational study in which we prospectively followed a cohort of RA patients. Ethical approval for the study was obtained from the ethics committee of Mianyang Central Hospital. Written informed consent was obtained from all patients. RA patients newly started on therapy in the department of rheumatology and immunology, Mianyang Central Hospital from March 2016 to March 2018 were recruited. Inclusion criteria were as follows: (1) meeting the RA diagnosis criteria (13); (2) all patients in active RA before treatment (DAS28 ≥ 2.6), and achieving clinical remission after treatment (DAS28 ≤ 2.6); (3) cooperation with the examinations and follow-up required for the study. Exclusion criteria were as follows: (1) joint disease caused by osteoporosis, trauma and other diseases; (2) autoimmune diseases such as systemic lupus erythematosus and Sjogren’s syndrome; (3) pregnancy or lactation; (4) malignancy or infection.

3.2. Collection of Demographic and Clinicobiologic Characteristics

The demographic data of RA patients including age, gender, and duration were collected and the number of tender or swollen joints were recorded before treatment. Erythrocyte sedimentation rate (ESR) was analyzed using the Westergren method examined by Roller 20 (ALIFAX, Italy). DAS28 score was calculated by:

Musculoskeletal ultrasonography of the wrists, hands and forefeet was performed with Mindray Resona7 or Mindray DC-8 (Mindray Bio-Medical Electronics Co., Ltd, Shenzhen, Guangdong, China). The hand and forefoot, which were more clinically affected by tenderness or swelling were chosen and examined. This included the joints most likely to be affected by RA: the wrist, metacarpophalangeal (MCP) II and III, proximal interphalangeal (PIP) II and III, metatarsophalangeal (MTP) II and V joints. Each joint region was investigated in dorsal, ventral, and, when possible, lateral views in GSUS and CDUS. The scoring methods of synovitis by GSUS and CDUS, tenosynovitis by GSUS and CDUS and erosions are shown in Table 1. The sum of these scores is US7 score (10). All RA patients underwent musculoskeletal ultrasonography to evaluate the US7 score before treatment and the beginning of follow-up.

Table 1. Definition of US7 Score

Patients in the low-activity and moderate-activity without poor prognostic factors received conventional disease-modifying antirheumatic drugs (cDMARDs) as a starting treatment. Patients in the moderate-activity with poor prognostic factors and severe-activity received a combined treatment of two or three types of cDMARDs or biologic disease-modifying antirheumatic drugs (bDMARDs), such as tumor necrosis factor-alpha antagonist or interleukin-6 antagonist. The DAS28 of each patient was re-evaluated monthly and the treatment protocol was adjusted every 3 months according to the DAS28. After clinical remission (DAS28 ≤ 2.6), the DAS28 was re-evaluated monthly and the original treatment plan was maintained for at least 3 months. The treatment dose was gradually reduced when the clinical remission was maintained for 3 months. The successful treatment was defined when clinical remission was maintained for at least 6 months.

A one-year follow-up was performed for all successful treated RA patients who had reached clinical remission and their US7 scores and DAS28 were recorded as the baseline indicators before the beginning of follow-up. DAS28 was evaluated every 3 months (3rd, 6th, 9th, and 12th month) during the follow-up. Recurrence was defined if DAS28 > 2.6 or the increase of DAS28 > 0.6 compared to the baseline were found at any time during the follow-up. The patients were divided into the recurrence group and non-recurrence group according to their recurrent results, and the clinical indicators and US7 scores before follow-up were compared and analyzed between the two groups (Figure 1). 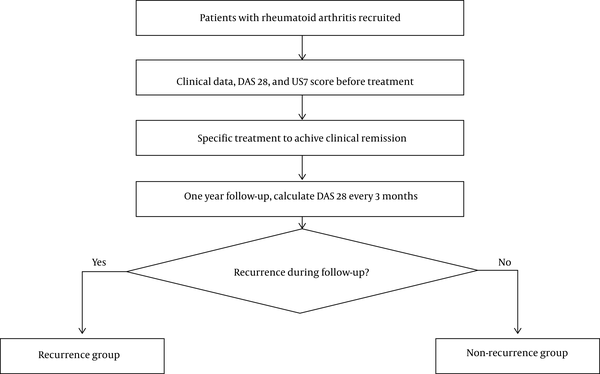 Statistical Product and Service Solutions (version 22.0; SPSS Inc., Chicago, IL, USA) and Medcalc (Version 22.0.1; MedCalc Software, Ostend, Belgium) were used for statistical analysis. The numerical data were expressed as mean ± standard deviations for normally distributed variables and as median (interquartile range) for other continuous variables. Independent sample t-tests and Mann-Whitney U-tests were used for comparison, and the paired variables were compared by Wilcoxon signed rank test. The categorical variables were expressed as number and the comparison was performed by the chi-square test. The association between US7 score and DAS28 before treatment was analyzed with Spearman correlations. The recurrence-free survival curves were plotted using Kaplan-Meier method and compared using the logrank statistic to analyze the difference in recurrence rate between RA patients with subclinical synovitis (US7 score ≠ 0) and without subclinical synovitis (US7 score = 0). Univariate COX regression analysis of US7 score was performed to analyze its effect on the recurrence of RA patients after treatment. Receiver-operating characteristics (ROC) curves were established to evaluate the predictive accuracy of the DAS 28 and US7 score for prognosis, and a combined prediction model was established by Logistic regression. Statistical significance was defined as two-tailed P < 0.05 for all tests.

A total of 186 RA patients were included in this study (41 males and 145 females, mean age of 54.09 ± 11.12 years, median disease duration of 9 months, and median DAS28 of 5.2). Twenty patients were diagnosed as low-activity, and the gray-scale ultrasonic image showed mild synovial hyperplasia and Doppler blood flow signal was not obvious (Figure 2A). In 93 RA patients with moderate-activity, it showed a moderate synovial hyperplasia with a little blood flow signal (Figure 2B). In 73 RA patients with severe-activity, a severe synovial hyperplasia with significantly increased blood flow signal was displayed (Figure 2C). The ultrasonic features revealed that most RA patients had GSUS synovitis and CDUS synovitis. GSUS synovitis was more common in the wrist, MCP2 and MTP2, and CDUS synovitis was more common in the wrist and MTP. According to the US7 score, the median US7 score was 18. Correlation analysis showed that the US7 score was positively correlated with DAS28 before treatment (r = 0.535, P < 0.001) (Figure 3). 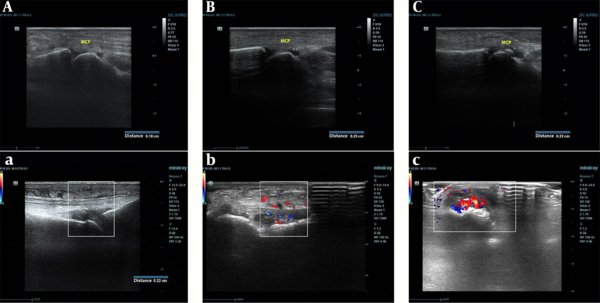 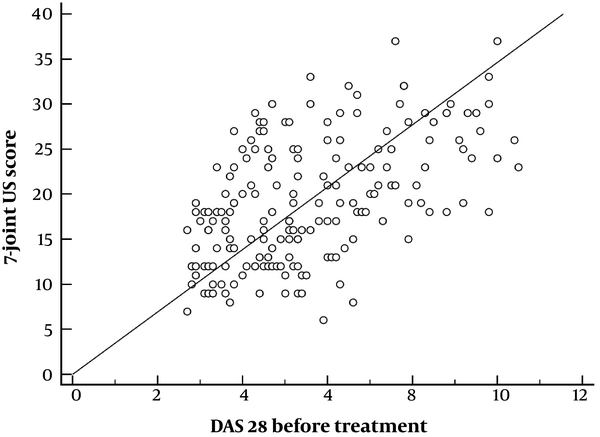 Figure 3. Scatter plot of the correlation between the US7 score and DAS28 before treatment. US7 score, seven-joint ultrasonic score; DAS28, disease activity score in 28 joints.

4.2. Comparison of the DAS28 and US7 Score Before and After Treatment

4.3. Recurrence Analysis of One-Year Follow-Up for RA Patients with Disease in Remission

Table 3. Comparison of Clinical Data, DAS28, and US7 Score Between the Recurrence and Non-Recurrence Groupsa, b

4.4. Influence of the Subclinical Synovitis on the Recurrence of RA Patients in Clinical Remission After Treatment 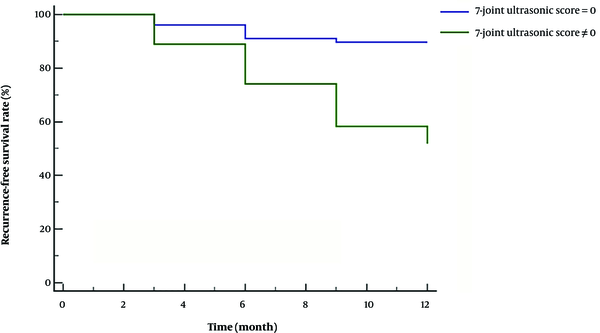 Figure 4. Kaplan-Meier analysis of the effect of US7 score on the outcome of RA patients. The recurrence rate of RA patients with subclinical synovitis (US7 score ≠ 0) after successful treatment was higher than those without subclinical synovitis (US7 score= 0) (Logrank χ2 = 27.556, P < 0.001). US7 score, seven-joint ultrasonic score; RA, rheumatoid arthritis.

4.5. Accuracy of US7 Score and DAS28 for Predicting the Prognosis of RA Patients 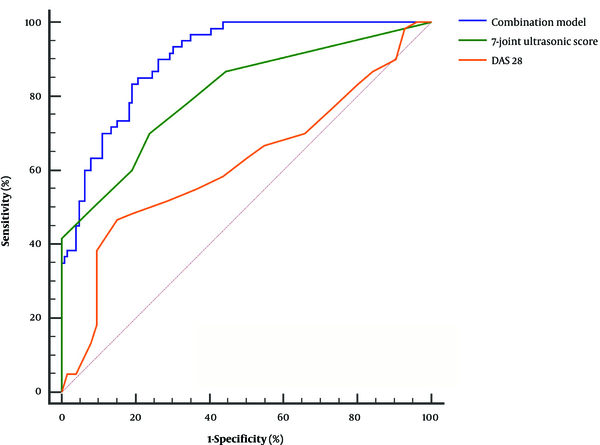 Figure 5. ROC curves of US7 score and DAS28 in predicting the recurrence of RA patients in clinical remission. US7 score, seven-joint ultrasonic score; DAS28, disease activity score in 28 joints; RA, rheumatoid arthritis; ROC, receiver-operating characteristics.
Table 4. Accuracy of US7 Score and DAS28 for Predicting the Prognosis of RA Patientsa

In the present study, the US7 score was positively correlated with DAS28, which indicated a high application value in the assessment of RA disease activity, similar to DAS28. Moreover, the disease activity could be assessed more intuitively and objectively by ultrasonography. RA patients with low-activity showed mild synovial hyperplasia and no Doppler blood flow signal. Synovial hyperplasia is obvious in RA patients with moderate-to-severe activity and is accompanied by significant blood flow signals. It suggested that in addition to the assessment of different disease activities, ultrasound examination is helpful to clinical treatment adjustment by imaging characteristics.

In the present study, the ROC curve showed that the AUC of US7 score was below 0.9 although it was higher than DAS28. It indicated that the US7 score alone was not accurate, and the combination was needed to improve the predictive accuracy. The combined prediction model of US7 score and DAS 28 showed a higher AUC (0.909), suggesting that the combined model could accurately predict the outcome of RA patients in clinical remission. Physicians may record the US7 score and DAS28 of RA patients and predict their probability of recurrence using this model to adjust clinical treatment.

RA patients in clinical remission are easily to recur due to subclinical synovitis. The results of our study are helpful to predict the recurrence risk of such patients. However, our study is a single-center study and the sample size is limited, there may be bias in the results, and a large sample size is needed for further verification. This study found that the accuracy of the combined prediction model is better than that of DAS28 or US7 score alone. It is believed that with larger sample sizes, we could predict the recurrence of RA patients more accurately.

The authors wish to thank all the study participants, research staff and students who participated in this work.