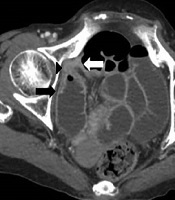 While typical abdominal hernias are found in the inguinal area, obturator hernia is rare and accounts for up to 1.4% of all hernias and 1.6% of all cases of mechanical obstruction of the small bowel (1). On the contrary, Meckel’s diverticulum is the most common congenital malformation of the gastrointestinal tract, present in approximately 2% - 4% of the population. However, it is uncommon in the adult population (2). The coexistence of obturator hernia and Meckel’s diverticulum is extremely rare, with only a few studies reported in the literature (3, 4). Although obturator hernias have the highest mortality rate of between 13% and 40% for all abdominal hernias (1), vague signs and symptoms make them difficult to diagnose. Multidetector computed tomography (CT) is useful for the identification of abdominal wall hernias (5). Herein, we present a rare case of herniation of Meckel’s diverticulum through the obturator canal, with an emphasis on imaging features.

A 76-year-old woman visited the local hospital due to abdominal pain and vomiting; she was referred to our hospital for intensive care and surgical treatment. At presentation, her vital signs were stable. Laboratory tests indicated that her leukocyte count and C-reactive protein (CRP) levels were 24.41 × 103/µL and 20.08 mg/dL, respectively. Renal function tests showed a blood urea nitrogen (BUN) level of 58.4 mg/dL and a creatinine level of 2.49 mg/dL. Other laboratory results were unremarkable.

Abdominal supine radiography performed at our hospital showed the ileus with gas distension in the small bowel (Figure 1A). A contrast-enhanced abdominal CT performed outside of our hospital showed the small bowel with wall enhancement and fluid collection at the right obturator foramen, indicative of obturator hernia (Figure 1B). Evaluation of the proximal portion of the herniated bowel showed a tubular structure connected with the small bowel (Figure 1C). On precontrast image, subtle heterogeneous high attenuation was noted at the herniated bowel wall, suspicious of mural hemorrhage (Figure 1D). These imaging findings suggested obturator hernia with incarcerated small bowel. 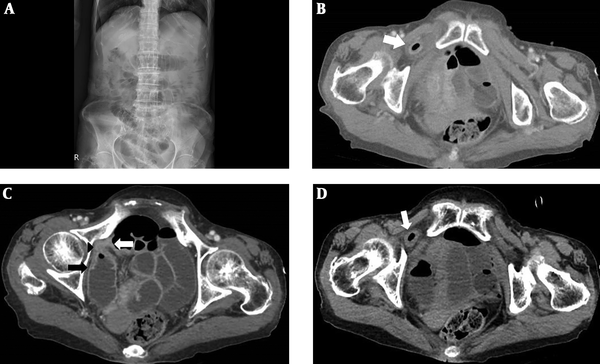 Immediate nasogastric tube decompression was performed in the emergency room and the general surgeon was notified. With a working diagnosis of acute small bowel obstruction, the patient was instantly admitted to the general surgery (GS) department followed by emergency laparoscopic herniorrhaphy.

Obturator hernia is a relatively rare type of abdominal hernia, characterized by herniation of abdominal contents through the obturator foramen. The prevalence of obturator hernia is approximately 0.07% - 1% of all hernias (6). Typically, it occurs in multiparous older women or patients with chronically raised intra-abdominal pressure. In general, obturator hernias are asymptomatic and difficult to diagnose unless mechanical obstruction followed by strangulation of the herniated bowels evokes severe abdominal pain. In 48% of the reported cases, pressure is applied to the obturator nerve by the herniated bowel, causing Howship-Romberg sign (pain and paresthesia along the inner aspect of the thigh, down to the knee) (7).

In this case, the patient had coexistence of these two rare diseases: obturator hernia containing Meckel’s diverticulum. This combination of infrequent illnesses is unusual, with only a few surgical cases reported in the literature (3, 4). Thereby, we report this case to discuss significant radiologic findings.

Abdominal CT scans with contrast enhancement have proven to be effective in identifying both obturator hernia and Meckel’s diverticulum with complications (1, 4, 5). Incarcerated obturator hernia can be diagnosed by locating the herniated sac between the pectineal and obturator muscle, superior and medial fasciculi of obturator externus muscle, and external and internal obturator muscles. Asymptomatic Meckel’s diverticulum alone may appear as a fluid-or air-filled pouch that arises from the antimesenteric side of the distal ileum (8). Typical CT findings of complicated Meckel’s diverticulum include small bowel obstruction and extravasation of contrast material when a gastrointestinal hemorrhage is present.

CT and magnetic resonance imaging findings of previous surgical literature reporting cases of obturator Littre hernia showed a small intestine loop herniated through the obturator foramen with dilatation of the proximal small bowel (11, 12) . In our case, the herniated Meckel’s diverticulum was positioned at the right obturator foramen (Figure 1B) and the transition site of the small bowel was observed as a tubular structure (Figure 1C). At first, the lesion was suspected to be incarceration of the small bowel. Finally, intraoperative findings confirmed that the herniated small bowel was actually Meckel’s diverticulum.