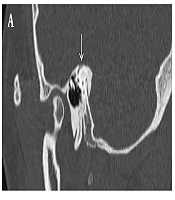 Superior semicircular canal dehiscence (SSCD) is known as abnormal communication of the superior semicircular canal (SCC) to the intracranial space secondary to a bony defect in the canal. Patients who are subjected to surgical repair usually have intractable symptoms, and recently, plugging of SCC using a transmastoid approach has been widely recommended. In this report, we describe a case of incomplete plugging for SSCD in a 37-year-old woman, along with the high-resolution three dimensional magnetic resonance imaging (3D MRI) findings using Pöschl view reconstruction. Postoperative MRI of 3D T2-wieghted sampling perfection with application optimized contrasts using different flip angle evolution (SPACE) Pöschl plane demonstrated an incomplete plugging of the SCC with partially visible perilymphatic fluid in the posterior limb above the common crus. A 3D fluid-attenuated inversion recovery (FLAIR) sequence showed an enhancement involving the vestibule and SCC, suggesting labyrinthitis. Although there are few reports about incomplete plugging for SSCD, this case could demonstrate postoperative status and complication after plugging of SSCD using a high-resolution 3D MRI sequences with Pöschl view reconstruction.

Since the description of superior semicircular canal dehiscence (SSCD) for the first time by Minor et al. in 1998, SSCD has been recognized as a clinical syndrome with symptoms of both auditory and vestibular dysfunction (1). Patients usually present vertigo, conductive hearing loss, autophony, tinnitus, or Tullio’s phenomenon, which is vertigo with or without nystagmus induced by loud noise. These symptoms are associated with a bony dehiscence in the roof of the superior semicircular canal (SCC), which can create a third mobile window into the labyrinth, consequently cause dissipation of the acoustic energy of sound waves, abnormal mobility of the endolymph, and reduction in bone conduction threshold (2). Surgery is recommended in patients with persistent intractable symptoms after undergoing conservative treatment. Generally, plugging of the osseous defect, resurfacing of the SSC roof, or reinforcement of the round or oval window are commonly used surgical options (3). Unfortunately, revision surgery is required when symptoms are persistent after surgical repair in order to resolve incomplete closing of the dehiscence. Recently, few studies have reported that high-resolution magnetic resonance imaging (MRI) techniques facilitate visualization of fluid signal in SCC, which in turn enable the evaluation of postoperative status including canal occlusion. Here, we report a case of imaging findings of incomplete plugging for SSCD using high-resolution three dimensional (3D) MRI by using Pöschl view reconstruction.

A 37-year-old female patient was referred to our hospital with a five-year history of autophony, vertigo and Tullio phenomenon. Unenhanced high-resolution temporal bone computed tomography (CT) scan was performed on a 128-section scanner (Somatom definition AS; Siemens Medical Solutions, Erlangen, Germany) with a 0.6-mm of the slice thickness, and SSCD was confirmed in her right temporal bone (Figure 1A). Subsequently, she underwent SSCD repair by canal plugging via the middle cranial fossa approach. However, autophony and Tullio phenomenon with hearing disturbance remained for 2 years after plugging surgery. Vestibular evoked myogenic potential (VEMP) was conducted to assess the presence of residual third mobile window, and VEMP thresholds was 80 dB in the right side. Postoperative temporal bone CT revealed fluid attenuation in SCC with a thin radiopaque covering above the previous SSCD (Figure 1B). Follow-up 3T MRI examination (Magnetom Skyra 3.0T; Siemens Medical Solutions, Erlangen, Germany), including isotropic 3D high-resolution T2-weighted sampling perfection with application optimized contrasts using different flip angle evolution (SPACE), pre- and post-contrast 3D fluid-attenuated inversion recovery (FLAIR) images with a 0.6-mm slice thickness, was performed. The two radiologists evaluated the presence of filling defect of SCC above the ampulla and common crus, presence of an abnormal signal intensity within the inner ear, and contrast enhancement on 3D high-resolution reconstructed images. Moreover, we reconstructed images in the Pöschl view, which is oblique plane parallel to SCC. 3D T2-wieghted SPACE Pöschl plane reconstructed image demonstrated a focal filling defect of SCC above the superior ampulla and common crus (Figure 2A), but a short segmental perilymphatic fluid signal remained in the posterior limb of SCC above the fenestration site, suggesting an incomplete plugging (Figure 2B). 3D-FLAIR sequence showed an enhancement involving the vestibule and SCC, suggesting labyrinthitis (Figure 2C). Consequently, she underwent revision surgery via middle cranial fossa approach for repairing residual SSCD. The materials used in the previous surgery were removed, and then bone wax with soft tissue was applied for SSCD, and the bone chip was finished with glue. After revision operation, autophony and Tullio phenomenon improved and the remaining mild high-frequency sensorineural hearing disturbance was made tolerable with the assistance of a hearing aid. 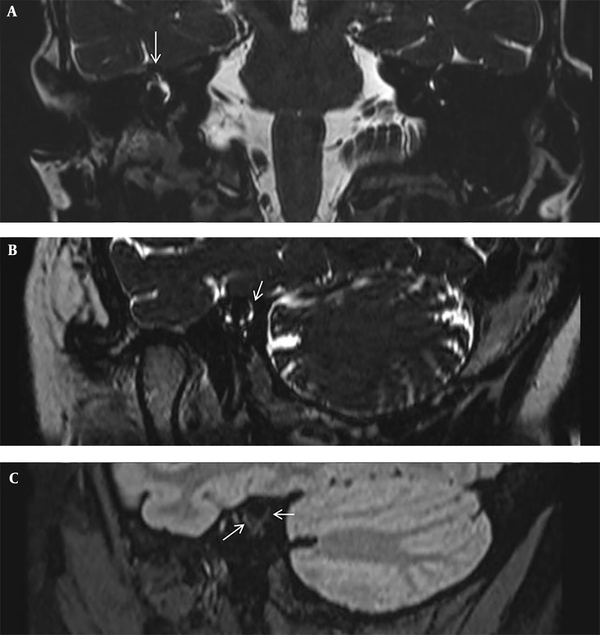 Herein, we have reported the imaging finding of incomplete plugging for SSCD using high-resolution 3D MRI sequences with Pöschl view reconstruction for evaluating postoperative status and presence of complication. The patient in our study showed a residual perilymphatic fluid signal above the fenestration site of the common crus on 3D T2-wieghted SPACE Pöschl view, suggesting an incomplete plugging. Additionally, a faint contrast enhancement is noted at the vestibule and SCC on contrast-enhanced FLAIR image, suggesting labyrinthitis. These MRI findings allowed us to perform revision surgery and help determine the extent of SSC occlusion for achieving an anatomical guide to prepare for the surgery.

SSCD symptoms are caused by a third window via a bony defect in the canal, which allows for the sonic pressure wave to be dissipated to the intracranial space (1, 4). When the patient presents intractable or debilitating symptoms after conservative treatment, operative intervention can be considered. So far, canal plugging, canal roof resurfacing and capping, and round window reinforcement are well-known surgical methods for repairing SSCD (3). Among them, recent studies demonstrated that plugging of SCC using a transmastoid approach is preferable than resurfacing owing to its lower revision and complication rates and a shorter hospital stay (5). Plugging of SCC blocks the extra window with bone dust, bone wax, or muscle, and then covers the operative site with muscular fascia, powdered bone, a bone chip, or cartilage (6). One report suggested that more than 90% of the patients who underwent canal plugging showed postoperative improvement in vestibular and hearing symptoms (7).

Recent studies have reported the utility of postoperative imaging evaluation after plugging for SSCD. Dournes et al. reported that a postoperative CT scan could detect complications such as a fistula or pneumolabyrinth (2). Moreover, CT is helpful for visualizing the condition and location of radiopaque materials including bone cement for reconstruction of the tegmen tympani or filling the bony defect of SSC (8). However, CT had some limitations to confirm complete closure of the third window, which is resulted by the radiolucent characteristic of surgical materials, such as the plugging wax or the covering muscular fascia or cartilage (2). In such cases, high-resolution MRI with heavily T2-weighted sequences could be used to assess successful closure of SSCD by detecting the presence of a bright signal intensity (SI) fluid in plugged SCC (8, 9). Also, postoperative MRI can be used to exclude other complications such as labyrinthitis, vascular injury or encephaloceles (10, 11). Furthermore, a recent report demonstrated that co-registrated CT/MRI combining 3D reconstruction of the CT and MRI, successfully identified the exact location of a residual defect (8). In our case, we obtained 3D high-resolution T2-wieghted, pre- and post-contrast FLAIR sequences, and could therefore reformat 3D images with an intended direction, such as the Pöschl plane. It is known that the Pöschl’s plane reformatted parallel to SCC, or Stenver’s plane reformatted perpendicular to SSC, which are derived from a high resolution temporal bone CT, can accurately demonstrate SSCD (3, 12, 13). These reformatted MR images optimized for SCC allow highlight the exact location of the residual perilymphatic fluid signal through a high spatial resolution and high contrast between fluid and bone of high-resolution T2-weighted images. Moreover, 3D FLAIR with gadolinium enhancement allowed for the detection of breakdown of the blood-labyrinth barrier, based on which labyrinthine inflammation or hemorrhage could be clarified (14). Consequently, we could provide accurate informs to clinicians about the most likely site of a persistent defect for revision surgery.

After revision surgery, symptoms directly related to SSCD, such as autophony or the Tullio’s phenomenon, tend to better improve than other associated symptoms, including headaches, chronic dizziness, or disequilibrium (11). In addition, few previous reports revealed that the hearing outcome after revision surgery might be similar or worse than that of previous operation (11, 15). Therefore, proper patient selection before revision surgery is mandatory for satisfactory improvement of symptoms. However, this study has presented only one case of high resolution 3D MRI sequences using Pöschl view reconstruction. Well-designed future prospective studies including comparison with temporal bone CT is necessary to confirm the clinical benefit of these MRI sequences with Pöschl view reconstruction whether it could guide an optimized outcome for patients.

In conclusion, we demonstrated a case of incomplete plugging for SSCD, which was visualized using high-resolution 3D MRI sequences with Pöschl view reconstruction. If the patient has residual symptoms after surgical intervention for SSCD, performing high-resolution 3D MRI could be helpful to assess the patency of SCC and accompanying complications.