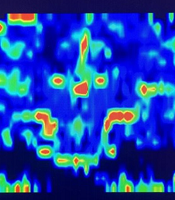 This study aimed to evaluate the blood perfusion parameters, such as rCBV and rCBF, in patients diagnosed with mesial temporal lobe epilepsy (MTLE), using DSC-perfusion MRI to determine whether there is a change in these parameters and if this modality can be used to diagnose and localize the epileptic side.

Twenty-two patients, who were diagnosed with TLE clinically and electrophysiologically by a neurologist, were investigated in this study. The patients were examined for the presence of any other lesions, such as tumors or cerebrovascular disease as the exclusion criteria. Perfusion images were processed by the Siemens perfusion software, and the rCBV and rCBF maps were generated based on the gamma variate fit. For qualitative analysis, coronal reconstruction of rCBV and rCBF maps was performed. For quantitative analysis, a single neuroradiologist placed the region of interest (ROI) on the hippocampus and the parahippocampal gyrus on T1W images at the same level of DSC images. After determining the CBV and CBF values relative to the ROI of each side, the asymmetry index (AI) was calculated.

In patients with TLE, significantly lower blood perfusion parameters in the affected side of the brain can help radiologists and neurologists to lateralize the MTLE side.

Focal seizures are the most common type of seizures, accounting for almost 60% of all seizures. The most common form of focal seizures is temporal lobe epilepsy (TLE) (1). TLE was first categorized by the International League Against Epilepsy (ILAE) under the group of localization-related symptomatic epilepsy in 1989 (2). There are few epidemiological studies on TLE, and the reports are controversial (1, 3-5). TLE is subcategorized as mesial temporal (amygdalohippocampal) and lateral temporal lobe epilepsy (LTLE) or neocortical (6). In 2010, the ILEA identified mesial temporal lobe epilepsy (MTLE) as a subclass of limbic epilepsies. The MTLE was defined as a symptomatic focal epilepsy. The pathophysiology of this condition is usually hippocampal sclerosis (HS) (2, 7).

TLE is diagnosed according to the patient’s history of focal seizure symptoms and is supported by electroencephalography (EEG), showing a temporal lobe epileptiform-like activity, and by imaging of the lesion (8). Commonly, TLE does not respond well to antiepileptic drugs. It is the most common form of medically intractable epilepsy (MIE), responsible for most epilepsy surgeries with a good prognosis (9). To localize the epileptic site for surgery, different neuroimaging methods can be applied. These methods include structural magnetic resonance imaging (MRI) to show the temporal lobe anatomy and the presence of tissue sclerosis, diffusion-weighted imaging, diffusion tensor imaging, magnetoencephalography, functional MRI (fMRI), positron emission tomography (PET), and single-photon emission computed tomography (SPECT), all of which can improve the outcomes of surgery (10, 11).

Perfusion MRI is one of the modalities used to evaluate the cerebral hemodynamics and localize intracranial neoplasia and cerebrovascular events. Perfusion imaging is divided to non-contrast methods (arterial spin labeling) and contrast-enhanced methods. The contrast-enhanced methods are subdivided into dynamic contrast-enhanced (DCE) T1W imaging and dynamic susceptibility contrast (DSC) T2 * W imaging (12, 13). DSC-MRI is the method of choice to measure the brain blood perfusion parameters, as it relies on the T2* signal loss of gadolinium-based contrast bolus, passing through a capillary bed. The most commonly calculated parameters are the relative cerebral blood volume (rCBV), relative cerebral blood flow (rCBF), mean transit time (MTT), and time to peak (TTP) (12-14).

Studies have shown that there may be a significant relationship between TLE and perfusion of the epileptic site. They have investigated different aspects of perfusion changes in epilepsies, especially localized epilepsies, such as TLE (15-21). One of the most inspiring studies was conducted by Xing et al., which demonstrated a decrease in the perfusion parameters in the epileptic side of TLE patients compared to the opposite side (19). However, there are limited studies evaluating changes in the cerebral blood flow perfusion parameters in epileptic patients, and there is no similar study on Iranian patients.

In this study, we aimed to evaluate the blood perfusion parameters, including rCBV and rCBF, in patients diagnosed with MTLE, using DSC perfusion MRI to determine whether there is a change in these parameters and whether it can be used as a novel alternative method for localizing the epileptic side.

Twenty-two patients (mean age: 26.45 ± 6.87 years), who were diagnosed with TLE clinically and electrophysiologically by a neurologist, were studied. All patients had previous MRI scans, indicating unilateral MTLE as sclerosis and volume loss, with no other lesions, such as tumors or cerebrovascular disease (as the exclusion criteria). All patients gave their informed consent about the study procedures, and the ethics committee of the university approved the procedures.

The DSC-MRI images were acquired using a T2*-weighted gradient-echo, echo-planar imaging (GRE-EPI) sequence with 50 continuous phases. The contrast agent (gadoterate meglumine, DOTAREM) bolus was administered in the 10th phase at 0.2 mmol/kg body weight dose, followed by 20 mL of saline flush. The contrast medium was injected by a MEDRAD injector (Liebel-Flarsheim Co., Cincinnati, OH, USA) at an injection rate of 4 mL/sec. Another axial gradient-echo T1W sequence with the same parameters, such as FOV, slice thickness, and coverage, was obtained after perfusion imaging for a better localization of the region of interest (ROI).

The perfusion images were processed by the Siemens perfusion software, and the rCBV and rCBF maps were generated based on the gamma variate fit. Since the perfusion differences were in the range of < 10%, and the hippocampus could be practically visualized in few axial slices, we used a quantitative analysis. Besides, a coronal reconstruction of the rCBV map in one of the patients in presented in Figure 1. 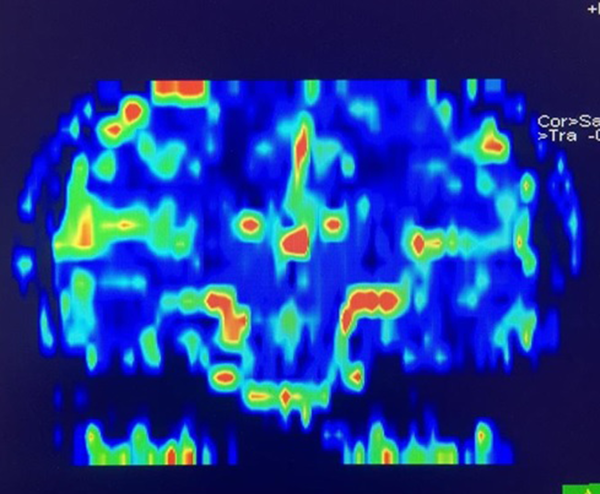 Decreased relative cerebral blood volume (rCBV) on the right side of the hippocampus in patient No. 10 with right-sided temporal lobe epilepsy (TLE).

For the quantitative analysis, a single neuroradiologist with 15 years of experience, who was blinded to the clinical data of the patients, placed the ROI on the hippocampus and the parahippocampal gyrus. The free-shaped ROI with a mean size of 15 pixels was placed on the T1W image, which showed the hippocampus the best, and was copied at the same level of DSC images. After determining the CBV and CBF values relative to the ROI of each side, the asymmetry index (AI) was calculated by Equation 1 (19):

Table 1. The Demographic Data and AI Results of the Patients

Table 2. The Patients’ Clinical Data a

Table 3. Comparison of Parameters in the Affected and Non-affected Sides a

The AI for both rCBV and rCBF was also measured for all patients listed in Table 1. The CBV and CBF were significantly different between the two sides of the brain in patients with unilateral epilepsy. Also, the positive values indicated that the parameters were lower in the affected side as compared to the opposite side. Besides, the frequency of epileptic side by gender is shown in Figure 2. 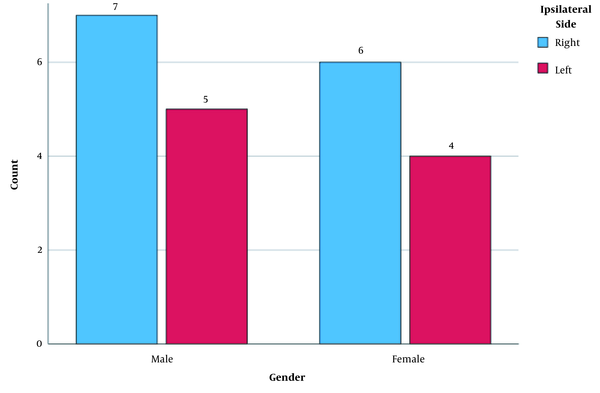 The frequency of epilepsy side in terms of gender

In another study by Xing et al. in 2013, a total of 20 interictal cases of TLE and 20 healthy volunteers underwent conventional and DSC MRI. They reported similar results and showed that both rCBF and rCVB were lower in the ipsilateral side, compared to the healthy control subjects. Although our results are similar, both studies lack a large study population. Further research is needed on a larger population, including LTLE patients so that we can strongly recommend DSC-MRI for localizing the epileptic side (19). Moreover, Kim et al. performed a study on 65 patients with intractable mesial temporal epilepsy (MTE). Also, subtraction ictal SPECT co-registered to MRI indicated hypoperfusion in the affected areas of patients with MTE (21).

Moreover, in a study by Oner et al. in 2015, a total of 36 patients with TLE and 11 healthy volunteers were enrolled. Measurements of different parameters showed that in TLE patients, the rCBF ratio of the affected side was significantly lower than the unaffected side. They also emphasized that physicians could localize the affected area in TLE by using rCBF (22); these results are consistent with our findings. However, the key point of our study is that we measured both rCBV and rCBf in the patients and compared the AI values.

In another study by Gelfand et al., changes in the perfusion pattern of the temporal lobe were found in patients with TLE. They also suggested that these abnormalities might be due to atypical vascular distributions; however, further studies are needed in this area (23). Another study by Pizzini et al. from Italy confirmed the effectiveness of pulsed arterial spin labeling (PASL) MRI in diagnosis and lateralization of hypoperfusion in patients with TLE (24). This issue was also discussed by Cleeren et al. in 2015, who showed that different temporal lobe seizures occurred in a common network induced by epileptogenic factors, such as blood perfusion in the brain (25).

The main shortcomings of ASL imaging for TLE localization are the need for a strong magnetic field and limited perfusion parameters that ASL can produce. However, in the present study, by evaluating the difference between parameters in both sides of the brain, we attempted to show that the difference was significant and that DSC-MRI could be applied to localize the epileptic region. We believe that DSC imaging of the brain and comparison of AI values can be reliable tools for a more effective TLE localization, even with a clinical magnetic strength of 1.5 T. The MR perfusion imaging can be used instead of SPECT imaging for tracing physiological changes in the epileptogenic side due to non-ionizing radiation and more spatial resolution.

In conclusion, in patients with TLE, significantly lower blood perfusion parameters in the affected side of the brain can aid radiologists and neurologists to lateralize the MTLE region.

This study was funded by Aja University of Medical Sciences, Tehran, Iran. We would like to express our gratitude to the reviewers for their constructive comments.