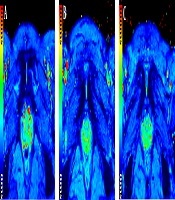 T2* mapping is a reliable tool in articular cartilage imaging. It has been widely used to evaluate the degeneration of knee joint and intervertebral discs. Degenerative joint disease of pubic symphysis is the primary cause of groin pain during late pregnancy.

Sixty-one first-pregnancy women, 48 second-pregnancy women and 64 nulliparous women were enrolled in this case-control study. All subjects underwent MRI exam of the pubic symphysis on a 1.5T MR scanner, including T2* mapping sequence. Regions of interest (ROIs) were hand-drawn on T2* maps along the left and right side of the cartilage and anterior/middle/posterior sub-regions of each side. T2* values were analyzed and compared among the three groups using analysis of variance. The average pubic symphyseal width was measured. The correlation between pubic symphyseal width and T2* values of cartilage were analyzed using Pearson's correlation coefficient.

Compared with nulliparous women, T2* values increased significantly in late pregnancy in the left/right cartilage of pubic symphysis. The differences were mainly driven by the posterior sub-region; while, no differences were found between women during first and second pregnancies. The positive linear correlation between symphyseal width and mean T2* values of the cartilage was only seen in the group of women during first pregnancy, with no significant linear correlation in the other two groups.

T2* mapping is a sensitive quantitative method capable of detecting changes in the pubic symphyseal cartilage related to pregnancy, and the T2* values increased significantly during late pregnancy.

The pubic symphysis is a secondary cartilaginous joint located between the left and right pubic bone, covered by a thin layer of hyaline cartilage attached to the fibrocartilage (1). Degeneration joint disease of the pubic symphysis, which can cause groin pain, always accompanies with aging and postpartum, and it is very common in pregnant women, such as symphysis pubis dysfunction.

T2 relaxation times can be used to measure cartilage degeneration due to their dependency on the water and collagen content of the extracellular matrix as well as orientation of collagen fibers (2). T2 mapping has been used in multiple clinical studies mostly in the knee (2-7), hip (4, 8, 9) and spine (10-16), many of which demonstrated that T2 mapping was able to identify early cartilage degeneration.

The T2* value is related to T2 as follows: 1/T2* = 1/T2 + 1/T2’, where 1/T2’ can be given by γΔB. So T2* values are also influenced by local susceptibility fields, T2* mapping is potential to provide greater sensitivity to the injury of the calcified cartilage zone (17), such as pregnancy-related degeneration of the pubic symphyseal cartilage. T2* mapping provides information on spatial macromolecule architecture and its interaction with water molecule mobility, could also be used to detect early abnormalities in the articular cartilage (18, 19). Compared with traditional T2 mapping, T2* mapping could bring added benefits of shorter acquisition time, high signal-to-noise ratio, and three-dimensionality (17, 20), which makes it be more suitable for pregnant women.

Literature search showed no studies with T2* mapping for evaluation of the pubic symphysis during pregnancy. The hormone called relaxin released during pregnancy increases the elasticity of tendons, ligaments, and muscles, widen the pubic width, and stretch the cartilage between the two pubic bones for the demand of child-birth. When the changes of ligaments and cartilage go beyond the physiological limit, the pregnant woman suffers from groin pain. Normal T2* values of cartilage between the pubic bones in pregnant women are useful for determining pathologic changes.

The purpose of this study was to evaluate the cartilage of pubic symphysis alterations during late pregnancy using T2* mapping.

This case-control study was approved by the Ethical Committee of Shandong Provincial Hospital, and all the participants provided written informed consent for this study. Subjects enrolled in this study were all Han Chinese, the inclusion criteria was as follows: (1) Healthy nulliparous women at child-bearing age without any injury to the pelvis; (2) healthy first- and second-pregnant women at late pregnancy (28 weeks until birth) (usually between 37 and 42 weeks of pregnancy), and none of the subjects complained of pubic pain during their pregnancies. We excluded the subjects who could not endure magnetic resonance imaging (MRI) examination because of claustrophobia or other reasons. MRI data with too much artifact was also abandoned.

All participants underwent MRI of the pubic symphysis on a 1.5T MAGNETOM Amira (Siemens Shenzhen Magnetic Resonance Ltd., China) with body and spine array coils. The subjects were all lying in a supine position with mild hip flexion during the MRI examination.

The slice with the narrowest pubic symphyseal width at the middle part was identified, the average pubic symphyseal width and anterior pubic ligament at mid-point were then measured on TE = 11.83 ms images (Figure 1). The regions of interest (ROIs) analysis were undertaken manually by one senior radiologist. Two ROIs were hand drawn on TE = 11.83 ms images of the left and right side of the cartilage, and three sub-regions (anterior, middle and posterior) were drawn on each side of the cartilage (Figure 2) for zonal evaluation. The ROIs were positioned within the fibrocartilage zone seen in Figure 2. The volume for left/right region was 28.6 ± 4.5 mm2; and the sub-region was 7.0 ± 0.8 mm2. Then the same ROIs were copied to the T2* maps to obtain T2* values. Mean values for T2* were used for statistical analysis and expressed as mean ± standard deviation (SD). 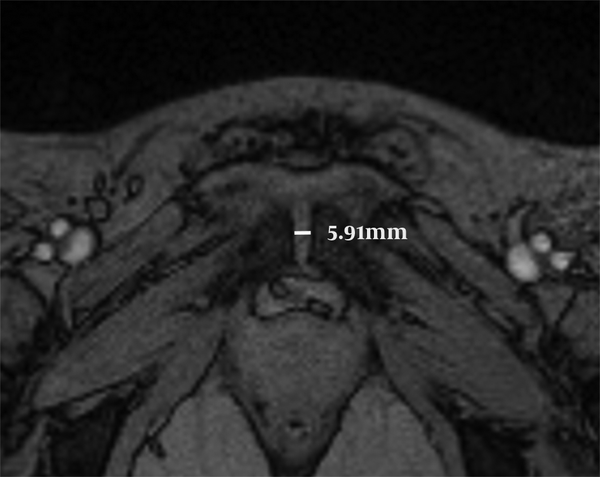 The pubic gap was measured on TE = 11.83 ms images of one woman during her first pregnancy (28 years old, gestational age 35 weeks), the pubic symphyseal width was 5.91 mm.

Eight regions of interest (ROIs) (left/right region and anterior/middle/posterior sub-regions of each side) were hand drawn on the cartilage of pubic symphysis based on TE = 11.83 ms image (A), then these ROIs were copied onto the T2* colored map (B). T2* values were measured.

Shapiro-Wilk test was used for the normality test to confirm that the data follow the normal distribution (P > 0.05). The differences in age, height and pubic gap among the three groups were analyzed using ANOVA. Student’s t-test was used to compare the gestational age between the first- and second pregnancies. To compare the T2* values in cartilage among the three groups, ANOVA and the least significant difference (LSD) tests were performed. Correlation between the pubic symphyseal width and the T2* values of cartilage were analyzed using Pearson's correlation coefficient for each group. A P < 0.05 was considered to be statistically significant. All the statistical analysis was conducted using SPSS Ver. 22.0 (IBM Corp., Armonk/NY, USA).

All T2* values in different regions of cartilage between the pubic bones of the three groups are shown in Table 2. The sub-region comparison of left /right regions showed that alterations of T2* values related to pregnancy were only seen in the posterior region (left P = 0.004; right P = 0.002). It indicated that the differences in T2* values in the cartilage of pubic symphysis between pregnant women and nulliparous women were mainly driven by the posterior sub-region (Figure 3).

Table 2. T2* Values in the Cartilage of Pubic Symphysis Among Three Groupsa 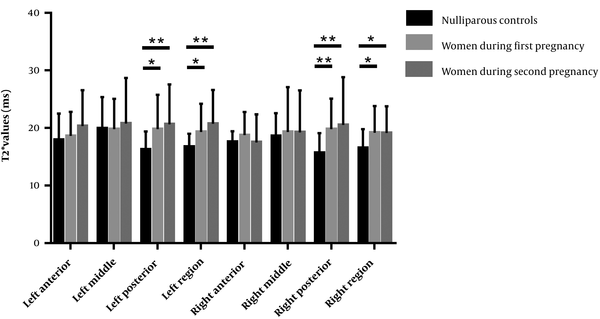 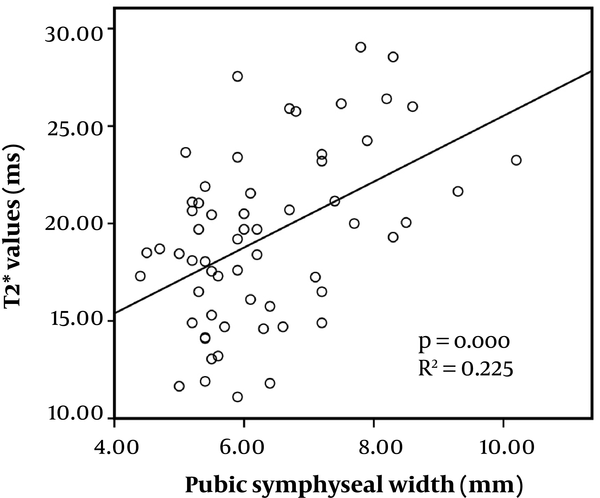 Correlation between T2* values and pubic symphyseal width in women during first pregnancy. T2* values were the average values of the left and right region of the cartilage. A positive linear relationship (r = 0.47, P < 0.001) is seen between them.

T2 relaxation time reflects the ability of free water proton molecules to move and to exchange energy inside the cartilaginous matrix (17). T2 mapping has been widely used in the evaluation of articular cartilage (2, 3, 6, 21, 22), and the numbers of studies have demonstrated it is a potential imaging biomarker for cartilage degeneration. T2* mapping is a technique similar to T2 mapping. It allows high image spatial resolution and shorter scan times (17, 20). Although T2* values have been widely used in many body regions, such as the intervertebral disc (16, 18, 19, 23, 24), knee (17, 25, 26), hip (27) or other articular cartilages (17), they have not been used previously for the assessment of pubic symphysis. So in this study, we chose T2* mapping as the tool to assess cartilage with short acquisition time which is appropriate for pregnant women. The results indicated the T2* values of cartilage between pubic bones increased significantly during late pregnancy, and the differences were mainly driven by the posterior sub-region of cartilage; while, no differences were seen between women during first and second pregnancies. This study suggests that T2* mapping is a sensitive quantitative method capable of detecting cartilage changes of the pubic symphysis during pregnancy.

The pubic symphysis is a secondary cartilaginous joint located between the left and right pubic bone, covered by a thin layer of hyaline cartilage attached to the fibrocartilage (1). In this study, the cartilage is mainly referred to fibrocartilage around the cleft in the center. T2* mapping is feasible to display the cartilage of pubic symphysis clearly, and the statistics results showed that T2* values of cartilage increase significantly during late pregnancy. The primary reason for this alteration is that the structure of pubic symphysis would change for the demand of child-birth. A hormone called relaxin released during pregnancy would increase the elasticity of tendons, ligaments, and muscles (28, 29), which induce the pressure from the fetus to easily widen the pubic gap and to stretch the cartilage between the pubic bones. Our results verified that the pubic symphyseal width increases from 4.8 mm to 6.2/6.7 mm in first/second pregnancy. We further found a positive linear correlation between T2* values of cartilage and pubic symphyseal width, which was only seen in women during first pregnancy. We assumed that the alterations of cartilage structure after first pregnancy were difficult to recover completely, so no significant linear correlation was seen in the women during second pregnancy.

The sub-region matrix comparison of cartilage demonstrated that the differences in T2* values between pregnant women and nulliparous controls were mainly driven by the posterior region of each side. There are four ligaments to maintain the stability of pubic symphysis, among which the posterior ligament is the thinnest one (1), so the posterior cartilage is the most prone to be stretched when the fetus presses the pubic symphysis.

Previous studies demonstrated a reduction in T2* values with degeneration of articular cartilage (4, 18, 30-32). Our results are contrary to previous work investigating the tendency of cartilage T2* values, the primary reason are the alteration of cartilage in this study is not related to aging, but pregnancy is in relatively short time. Other studies (33-36) reported a similar conclusion that early degenerative changes have higher T2 values. The hormone effect and external force can increase the water contents of cartilage, which may be one of the reasons for increased T2* values during pregnancy.

The major limitation of our study was that there was no histological assessment of cartilage between pubic bones during pregnancy. Further investigation is needed to establish the relationship between T2* relaxation times and precise biochemical content, such as water, collagen, and proteoglycans.

In conclusion, T2* values of cartilage between pubic bones increased significantly during late pregnancy, which was mainly driven by the posterior sub-region, while no differences were seen between women during the first and second pregnancies. In summary, our study demonstrated the feasibility of using T2* to monitor the pregnancy-related fibrocartilage changes of the pubic symphysis.

We would like to thank all volunteers and patients for their participation.