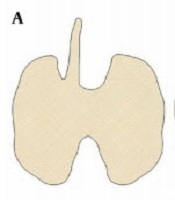 The pyramidal lobe (PL) is a common anatomic variation of the thyroid gland with a reported prevalence of over 50% in adult series, but to the best of our knowledge, there are no data in the literature regarding its characteristics in the pediatric population.

The aim of this study was to evaluate the prevalence, anatomic, and morphological features of the PL in pediatric participants on thyroid ultrasonography (US).

The descriptive cross-sectional study design was used. Between November 2018 and January 2020, the US images obtained from 325 participants with normal thyroid glands were retrospectively evaluated. The presence, location, size, volume, the morphology of the base, and continuity or separation from the thyroid gland were noted for each PL.

The present study showed, for the first time, that the age of the children is positively correlated with the size and volume of the PL. The prevalence and location of the PL were consistent with those reported in the adult population.

The pyramidal lobe (PL) is an anatomic variation of the thyroid gland observed as an incidental finding on ultrasonographic (US) examination. This lobe occurs when the caudal end of the thyroglossal duct differentiates into thyroid tissue (1). Many anatomic and morphological variations of the PL have been described, mostly based on the appearance, position, size, and shape (1). The PL may be susceptible to the same pathologies as the rest of the thyroid tissue; therefore, it is necessary to be informed of this common variation, as it may be a source of residual diseases in patients who previously have had thyroidectomy (2).

The frequency of the PL in adults has been reported to vary from 15 to 75% in cadaveric, surgical, radiological, and scintigraphic series, but to the best of our knowledge, no previous study has demonstrated the prevalence and features of the PL in infants and children.

The objective of this research was to evaluate the prevalence, anatomic, and morphological features of the PL of pediatric participants on thyroid US.

The Institutional Clinical Research and Ethics Committee approved this study. The descriptive cross-sectional study design was used. The present study analyzed 355 pediatric patients who underwent thyroid ultrasound examination between November 2018 and January 2020 at the University Hospital in Izmir.

The inclusion criteria for this retrospective study were as follows: (1) subjects under 18 years of age; (2) thyroid gland located in the normal position; (3) homogenous echogenicity of the thyroid parenchyma on US; and (4) no previous thyroid surgery. The following exclusion criteria were applied: (1) subjects over 18 years of age; (2) evidence of congenital thyroid disorders; (3) previous thyroidectomy; and (4) poor ultrasound image quality for thyroid evaluation. Patients with congenital absence of the thyroid gland [thyroid hemiagenesis (n = 2) and thyroid agenesis (n = 3)] were excluded from the study. Patients who underwent thyroidectomy previously (n = 3) were excluded from this research as well. Of the 347 patients enrolled, 22 were excluded since their ultrasound image quality was significantly compromised by patient movements.

A total of 325 subjects aged between 0 and 18 years (mean age, 10.95 years ± 4.92) were finally enrolled. The participants were classified into six age groups (Table 1). The age groups were chosen according to the definition in medical subject headings (MeSH) vocabulary (i.e., infants, toddlers, preschool children, school children, and adolescents).

Table 1. Distribution of Patients According to Age and Gender

The thyroid US examinations were performed by a single board-certified radiologist using a linear probe at a frequency of 5 - 12 MHz (Aplio 500, Toshiba Medical System, Japan).

After removing the clothing material from the neck, a sufficient amount of ultrasound gel was applied over the area of the thyroid cartilage, to ensure good contact of the US probe with the skin. Patients were examined from the submental region to the level of the suprasternal notch in a supine position with a pillow under the shoulders to maintain neck extension. Minimal pressure was applied during scanning in order to avoid distortion of the thyroid anatomy.

The thyroid gland was scanned in both the transverse and longitudinal planes. The PL was systematically evaluated as a routine part of the thyroid US examination. On gray-scale images, the PL extended in a cranial direction from the upper margin of the isthmus, with echogenicity similar to the normal thyroid gland (3).

The presence, location, size, volume, morphology of the base, and separation from the thyroid gland were noted for each PL. 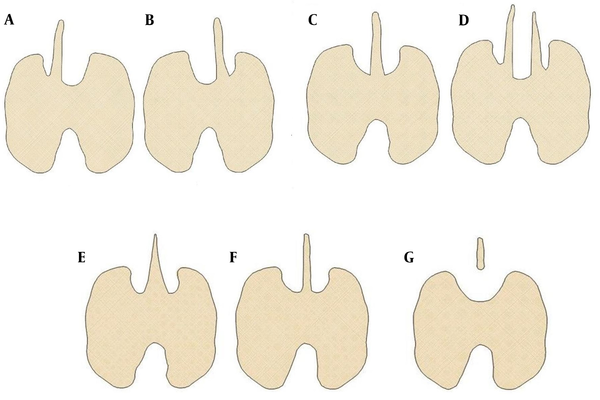 The volume of the PL was calculated using the following formula:

A correction factor of 0.524 was used to determine the volume of structures with ellipsoid shape.

The morphology of the base of the PL was categorized as follows: wide base size with a narrow apex and thin base size the same as the apex size (5) (Figure 1E and F).

The separation of the PL was described as a lack of continuity between the PL and the main thyroid gland (Figure 1G).

The distribution of quantitative variables was tested for normality using the Kolmogorov-Smirnov and Skewness-Kurtosis test. Quantitative data with a normal distribution were compared using the one-way ANOVA (followed by Bonferroni and Games-Howell post hoc analyses), while the Mann-Whitney U test, Kruskal-Wallis test, and Spearman's correlation test were employed for the analysis of continuous variables with a non-normal distribution. Chi-square and Fisher's exact tests were used for the analysis of categorical data.

The PL originated from the left of the midline of the isthmus in 62 (56.4%) and from the right of the midline in 46 (41.8%) patients. There was 1 (0.9%) patient in whom the PL originated from the midline of the isthmus, and in 1 (0.9%) patient, the PL was located bilaterally. The left-sided PL was more frequent in males than in females, but this gender difference was not significant (65.2 vs. 54.1%, P = 0.735, respectively). The left-sided PL was more common in group 4, group 5, and group 6; however, the differences between the age groups were not statistically significant (P = 0.192). Data related to the prevalence and location of the PL are given in Table 2.

Table 2. Distribution of Patients According to Gender, Location, and Prevalence of the Thyroid Pyramidal Lobe Among the Age Groups a

b P-values were obtained using a chi-square test; P-values < 0.05 was considered significant. 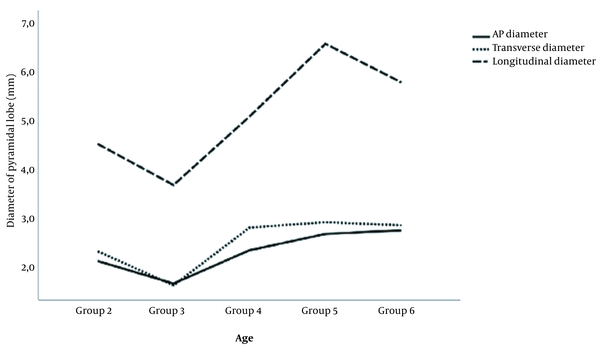 The graph shows the relationship between the estimated marginal means of the anteroposterior, transverse, and longitudinal diameters of the pyramidal lobe according to each age group.

Table 3. The Mean Diameters and Median Volume of the Pyramidal Lobe According to Age Groups and Genders, and the Statistical Significance Among the Age Groups a

a Vales are expressed as mean ± SD and median (interquartile range [IQR]) unless otherwise indicated.

b P-values for comparing genders among all age groups; P-values were obtained using the Kruskal-Wallis test; P-value < 0.05 was considered significant.

Complete separation of the PL from the thyroid gland was not observed in the study population.

The PL -also called Morgagni's or Lalouette’s pyramid- occurs when the caudal portion of the thyroglossal duct differentiates into thyroid tissue (1, 2). All the pathologies that may be seen in the normal thyroid gland are also seen in the PL. Therefore, knowledge of anatomy of this variant is of significance to the thyroid surgeons, as incomplete removal of the thyroid tissue prevents the completeness of thyroidectomy and may cause recurrent thyroid diseases (2, 3). US is a safe, low-cost, easy-to-implement, first choice for evaluating the thyroid gland and variants in infants and children (6). The PL is located in the pretracheal region between the isthmus of the thyroid gland and the hyoid bone. The echotexture of the PL is homogeneous, bright, and similar to the parenchymal echogenicity of the normal thyroid gland (3, 5).

Previous studies have suggested that PL is more frequent among females (3, 4, 10, 12-16), and some other studies have reported that it is more commonly seen among males (2, 8). However, in the present study, the PL was more frequent in girls than in boys, and this gender difference showed a strong significant correlation (P < 0.001).

Published data showed that PL is most commonly seen on the left side of the midline of the isthmus (3, 4, 8-15, 17). The reason for this probably lies in the fact that the thyroglossal duct is usually developed in the left caudal direction (1). In the current study, the PL was most frequently noted on the left side of the median plane (56.4%). Moreover, in one patient, the PL was located bilaterally. This finding conforms to the previous work reported by Mortensen et al. (5), who also found one patient with two PLs on thyroid US. The bilaterality rate of the PL in sonographic studies was lower than those in previous reports obtained on cadavers, ranging from 3.3 to 10% (18-20). The low bilaterality rate of the PL on US might be explained by the limitation in sonographic detection for thin PLs.

The present study had limitations that should be considered. This was a single-center, retrospective study. The number of subjects in each age group was relatively small. Future studies should focus on larger group sizes in order to further validate the results of the present study. There is a lack of studies to confirm the results of this study. Therefore, it is difficult to generalize the findings of this study to the whole pediatric population.

In conclusion, the present study provides first evidence for the anatomic and morphological features of the PL in the pediatric population. The present study showed, for the first time, that the age of children is positively correlated with the size and volume of the PL. The prevalence and location of the PL in the pediatric population are similar to those reported in the adult population. The high prevalence and variations in the location and size of the PL may impact the completeness of the total thyroidectomy. Therefore, it is important for the radiologists to report the presence of the PL on thyroid US.