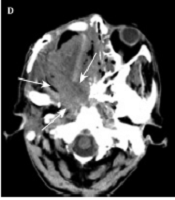 This study aimed to evaluate the ability of intra-arterial CRT alone to increase the overall survival (OS) of patients with MSSCC.

Forty patients with histologically confirmed MSSCC, who were treated at Tokyo Medical University Hospital (Tokyo, Japan) between February 1999 and June 2015, were enrolled in this study. Twenty-seven patients were treated with intra-arterial CRT (median dose of 60 Gy) without surgery (CRT group), whereas 13 patients were treated with neoadjuvant intra-arterial CRT (median dose of 40 Gy), followed by surgery (S group). The association of OS with age, performance status, T factor (mean tumor size according to the tumor-node-metastasis [TNM] grading system), N factor (mean lymph node involvement according to the TNM grading system), and treatment method was assessed.

The median follow-up duration was 36.0 months. There were no significant differences regarding the patients’ characteristics between the two groups. The treatment method was the only significant prognostic factor for OS. The five-year OS rates were 92% and 55% in the CRT and S groups, respectively (P = 0.01).

Maxillary sinus carcinoma is the most common type of paranasal sinus cancer (1), and squamous cell carcinoma is the primary histological type of maxillary sinus tumors. Unlike other head and neck malignancies, maxillary sinus carcinomas are often diagnosed in locally advanced stages (2), owing to their localization and lack of symptoms in early stages. According to several studies, use of concurrent chemoradiotherapy can improve the locoregional control and overall survival (OS) of patients with locally advanced head and neck carcinomas, compared to radiotherapy alone (3-5).

Maxillary sinus tumors often advance locally without lymph node metastasis due to limited lymphatic drainage (6). Therefore, chemotherapy followed by surgical resection, with or without radiotherapy, is the treatment of choice for patients with locally advanced maxillary sinus squamous cell carcinoma (MSSCC) (7-10). On the other hand, superselective cisplatin infusion with concomitant radiotherapy has emerged as a promising chemotherapeutic method (11-14).

This retrospective study was approved by the institutional review board (approval code: T2019-0262), and the requirement for written informed consent was waived.

The available treatment methods varied in the present study, because the time frame of the study was more than a decade, which could influence the therapeutic options. However, there were no significant differences between the two groups in terms of age, sex, tumor-node-metastasis (TNM) grading (8th edition by the Union for International Cancer Control [UICC]), tumor stage, or performance status (Table 1).

Table 1 . The Patients’ Characteristics in This Study

Over the course of this study, many advances were made in the available treatment methods, chemotherapy regimens, and irradiation methods (Table 2). Although cisplatin-based compounds were recognized as the chemotherapy agents of choice for both groups of patients, various regimens without cisplatin were used in early studies, particularly for the S group of patients (Table 3).

Table 3. The Regimens in the CRT and S Groups

This retrospective study was conducted according to the World Medical Association Declaration of Helsinki and was approved by the institutional review board. The requirement for informed consent was waived in this study.

Intra-arterial chemotherapy was performed by a radiologist. During this period, three other radiologists participated in the therapeutic procedures under the radiologist’s guidance. Intra-arterial chemotherapy involved the administration of high doses of cisplatin (200 mg/m2) using angiography-assisted computed tomography (CT) to allow for whole tumor coverage, as previously reported (16). The intra-arterial infusion of chemotherapeutic agents through the superficial temporal artery was performed according to the protocol proposed by Robins et al. (13). The patients in the CRT group received chemotherapy on days 1 and 36, while the S group received chemotherapy on day 1. The patients in the CRT group were irradiated at a median dose of 60 Gy, whereas the S group received a median dose of 40 Gy, followed by surgery. Surgical margins were defined based on the tumor bed before NACR.

Tumor response was evaluated by contrast-enhanced CT scan, magnetic resonance imaging (MRI), and endoscopy at two months after the end of treatment, according to the new Response Evaluation Criteria in Solid Tumors (RECIST) criteria (revised RECIST guideline, version 1.1) (17). Along with response evaluation according to the revised RECIST criteria, biopsy was performed for the patients.

The primary endpoint of this study was the OS measurement, and the secondary endpoint was the assessment of progression-free survival (PFS), both of which were calculated from the first day of treatment. The PFS was defined as the time interval from the first day of the therapeutic procedure until the time of death documented in the medical record or recurrence confirmed by CT or MRI. Besides, adverse events during treatment were defined according to the Common Terminology Criteria for Adverse Events (CTCAE) version 4 (18).

All statistical analyses were performed in SPSS version 27.0 (IBM Corporation, Armonk, NY, USA). A P-value less than 0.05 was considered statistically significant. The OS and PFS rates were plotted for patients in the CRT and S groups, using the Kaplan-Meier method, and the survival curves were compared based on the log-rank test. The prognostic factors for OS and PFS were identified in a multivariate analysis, using the Cox proportional-hazards model. The incidence of adverse events was also examined in the CRT and S groups by Chi-square test (χ² test). 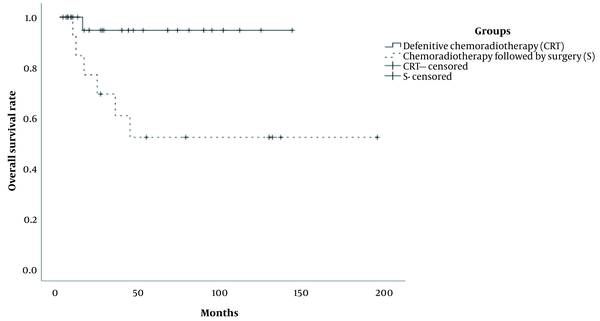 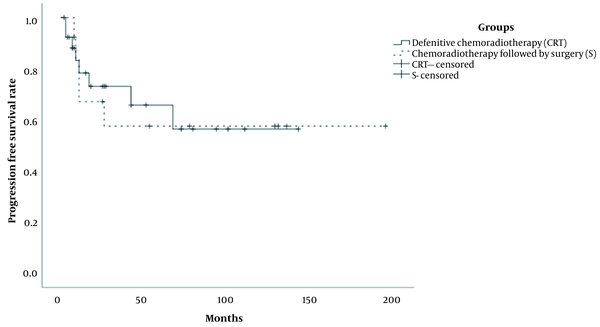 During the follow-up, five patients in the S group were diagnosed with local recurrence and expired in a median duration of ten months after the second-line therapy (Figure 3). Three patients in the CRT group were also diagnosed with tumor recurrence; two of them survived after surgery as a second-line treatment (Figure 4), while one patient died after receiving the best supportive care. The characteristics and outcomes of patients with tumor recurrence are presented in Table 4. There was no significant difference in the five-year PFS rates between the patients in the CRT and S groups (70% vs. 61%; P = 0.78). 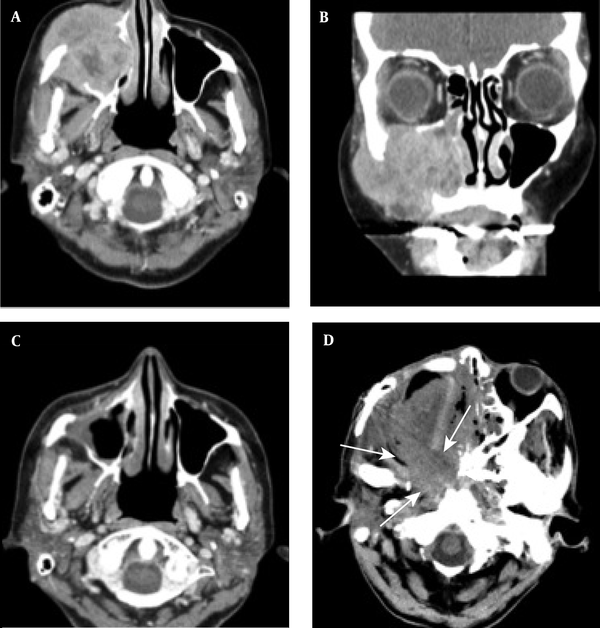 Table 4. The Second-Line Therapies After Recurrence and the Patient Outcomes

Based on the multivariate analysis using a Cox proportional-hazards model, among all variables, the treatment method was the only significant prognostic factor (P = 0.01) (Table 5). Regarding the development of treatment-related adverse effects, grade 2 toxicity occurred in five out of 27 patients in the CRT group, while such adverse effects were observed in two out of 13 patients in the S group. Besides, grade 3 toxicity occurred in five patients in the CRT group and two patients in the S group (Table 6). Nevertheless, there was no significant difference between the two groups regarding grade 2 or grade 3 toxicity (P = 0.424 and P = 0.773, respectively).

Table 6. Adverse Events Above Grade 2 According to the CTCAE v4.0 Criteria

In the present study, the treatment method was recognized as a prognostic factor in patients with MSSCC, while treatment-related adverse effects were similar in the two groups. The CRT group underwent superselective and retrograde chemotherapy. An angiography-assisted CT scan could confirm that the entire tumor volume was covered in both methods of chemotherapy. To discuss differences between the groups, the infusion speed was compared. However, since there was no detailed information in the patients’ medical records, the next step was to validate the infusion speed in trans-arterial administrations. Five and three patients relapsed in the CRT and S groups, respectively. All five patients with tumor recurrence in the S group expired despite additional second-line therapies. In contrast, two out of three patients with relapse in the CRT group survived after surgical resection. Therefore, intra-arterial chemoradiotherapy was proposed as a definite treatment for MSSCC, providing improved outcomes as compared to chemoradiotherapy followed by surgery.

Moreover, Homma et al. (23) showed that the five-year local progression survival and five-year OS rates were 65.8% and 67.9% in MSSCC patients treated with intra-arterial cisplatin infusion and concomitant radiotherapy, respectively. They also conducted a dose-escalation study to determine the optimal dose of cisplatin for intra-arterial chemoradiotherapy (24). In the present study, intra-arterial infusion using a superselective catheter allowed for the administration of a high dose of cisplatin. Besides, the use of CT-assisted monitoring ensured the coverage of the entire tumor, contributing to improved clinical outcomes using CRT. Overall, surgical interventions were significantly associated with a poor prognosis.

In the present study, no patients treated with CRT alone developed adverse effects (grade 4 toxicity or higher). In this regard, Rasch et al. (14) reported that the frequency of grade 2 renal toxicity (or higher) was significantly lower in patients treated with intra-arterial CRT. One patient suffered from grade 2 renal dysfunction, which was temporary. Also, one patient in the CRT group developed facial nerve palsy after chemoinfusion. Moreover, Sugiyama et al. (27) showed that cisplatin infusion into the middle meningeal artery (MMA) resulted in facial nerve palsy, because the feeding artery of the facial nerve arises from the petrosal branch of MMA. In the current study, to minimize the likelihood of facial nerve palsy, the chemotherapeutic agents were infused in the second portion of the maxillary artery, as maxillary sinus carcinoma extended to the lateral pterygoid muscle. However, this adverse event is limited to superselective chemotherapy, and it is preventable with an accurate knowledge of MMA anatomy.

The main limitations of this study were the retrospective design and several possible biases. To deal with the effect of bias, statistical analysis was performed using a Cox proportional-hazards model, which is a multivariate analysis. Moreover, the baseline characteristics of the patients could vary depending on many factors, such as chemotherapeutic agents and intra-arterial chemotherapy techniques. However, this study revealed that the therapeutic transition was not distressing for the patients, because the OS rate improved based on the comparison of the CRT and S groups. Finally, despite the ability of superselective CRT to improve the outcomes, the superselective intra-arterial infusion of chemotherapeutic agents is technically challenging; this problem could be overcome by the appropriate technical training of physicians and the improvement of catheters and guidewires. Overall, a multi-institutional phase III trial is needed to demonstrate the effectiveness of intra-arterial chemotherapy in patients with advanced MSSCC.

In conclusion, patients in the CRT group showed significantly prolonged OS rates compared to the S group. The definitive intra-arterial chemoradiotherapy increased the OS of patients with advanced MSSCC, based on a multivariate analysis. In the future, we will conduct a phase II clinical trial for a comprehensive comparison of CRT and S groups.

The authors would like to thank the Editage (www.editage.com) for their English language editing services.