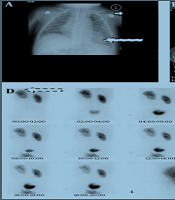 Thoracic kidney is a rare congenital abnormality with the lowest frequency of all renal ectopias. Most cases are discovered incidentally via routine imaging and have a benign clinical course. Here, we report three pediatric cases of thoracic kidney among 156 children with renal ectopy (1.9%). Thoracic kidney was asymptomatic in two children; in one child, it was associated with a recurrent diaphragmatic hernia. All diagnoses were made by chest ultrasonography (USG) and/or radiography in children and confirmed by computed tomography (CT) scan. Moreover, 99mtechnetium-ethylene-dicysteine (99mTc-EC) renal scintigraphy was carried out to visualize and assess the function of ectopic kidneys. All thoracic kidneys were left-sided, and their functions were comparable to their normally located counterparts. During an observation period of 5 - 10 years, two children with thoracic kidneys presented with unstable proteinuria/microalbuminuria and hypertension, respectively. The 99mTc-EC renal scintigraphy is an uncomplicated and safe method for imaging the thoracic kidneys and can be used for detecting the thoracic kidney function in children. Thoracic ectopic kidneys are associated with complications, such as hypertension and proteinuria. Children with thoracic kidneys need long-term follow-ups.

Thoracic kidney is a rare congenital abnormality, with the lowest frequency of all renal ectopias (< 5%) (1-3). This anomaly has been divided into four subtypes: with a closed diaphragm; with eventration of the diaphragm; with a diaphragmatic hernia (congenital or acquired); and with a traumatic diaphragmatic rupture (4). The prevalence of thoracic renal ectopia related to congenital diaphragmatic hernia is less than 0.25% (1-3). Embryological theories, such as pleuroperitoneal fusion abnormalities or persistence of the mesonephric tissue, may explain the cause of congenital thoracic kidney (4).

Patients with a thoracic kidney either present with no symptoms throughout their lives (1-3) or show dyspnea, flank pain, and intermittent cough (3-6). Regular follow-up is indicated in asymptomatic cases, while surgical treatment is recommended for children with respiratory distress, associated with a diaphragmatic defect and herniation (1-6). The differential diagnoses include neurogenic tumors, mediastinal lymphadenopathy, paraspinal abscess, aortic abscess, or esophageal pathologies (1-6).

MAG-3 and EC, as tubular radiopharmaceuticals, seem to be favorable for the assessment of kidney function due to the lower post-renal background activity and higher extraction rates in the kidneys. 99mTc–DTPA is a radiopharmaceutical used in the evaluation of filtration in glomerulonephritis or transplanted kidneys. According to the Polish National Ministry of Health Guidelines for Nuclear Medicine Procedures, all of the mentioned radiopharmaceuticals may be used in renal scintigraphy in children (9). Due to the relatively high availability and favorable cost of EC, it is currently the most widely used radiopharmaceutical in renal scintigraphy studies in Poland, both in adults and children. According to the available Polish data, the average cost of one labeling viol of EC is 14.5% less than MAG.

Negligible accumulation in the liver is one of the greatest advantages of 99mTc-EC over 99mTc-MAG3 (10). This feature is especially important when visualizing the kidneys in unusual locations, especially in the chest. It should be noted that radiation doses are similar for all radiopharmaceuticals (Table 1), as presented in detail in the European and Polish guidelines for diuretic renography in children (9, 11-13). Also, EC is excreted faster from the body as compared to MAG-3 (EC: about 70% after 40 minutes and about 95% after 1.5 hours post-intravenous administration; MAG-3: about 70% after 30 minutes and 95% after three hours) (9).

Among 156 children with renal ectopy in the age range of three weeks to 18 years, presenting to the Nuclear Medicine Center of Warsaw (Poland) during five years, thoracic kidneys were found in three children (two girls and one boy). In these patients, thoracic kidneys were diagnosed by USG and/or chest radiography (chest X-ray) before renal scintigraphy. In all children, thoracic localization of the kidney was confirmed by CT scan and 99mTc-EC renal scintigraphy.

Patients without pharmacological anesthesia after adequate hydration were examined in the supine position with a collimator placed under the body. After an immediate intravenous injection of a radionuclide tracer in the posterior-anterior (PA) projection, a dynamic acquisition was performed by the imaging system (DIACAM, Syngula, MiE). It continued for 20 minutes at a rate of 2 fps x 30 frames, followed by 15 fps x 8 frames and 34 fps x 30 frames. Images were acquired after excretion in each case, and supplementary late static images were acquired up to 60 minutes after 99mTc-EC injection in case of tracer retention. The dose of radioactivity within 35-120 MBq was calculated separately for each patient. At T0, 0.5 mg/kg body mass of furosemide was administered. Then, renal scans, renographic curves of radioactivity from the renal regions of interest (ROI), and the proportional percentage of each kidney function were determined. In all children, blood pressure, glomerular filtration rate (GFR) according to the Schwartz formula, and urinalysis were performed at the start and at the end of observations.

A thoracic left kidney was identified on the second day of the patient’s life. Since routine abdominal USG of the left kidney was absent, a chest USG was carried out (Figure 1A). The results of physical examination, renal function, urinalysis, and blood pressure were normal. Further imaging examinations included chest X-ray (Figure 1B) and chest CT scan (Figure 1C). The 99mTc-EC renal scintigraphy was also performed at the age of three years (Figure 1D) to compare the percentage of each kidney function. Two areas of focal tracer accumulation that corresponded functionally to two renal tissues were visualized. The thoracic location of the left kidney was determined. Both kidneys showed an efficient and adequate flow. The left thoracic kidney showed 51.1% function in both kidneys on the split differential renal function tests. 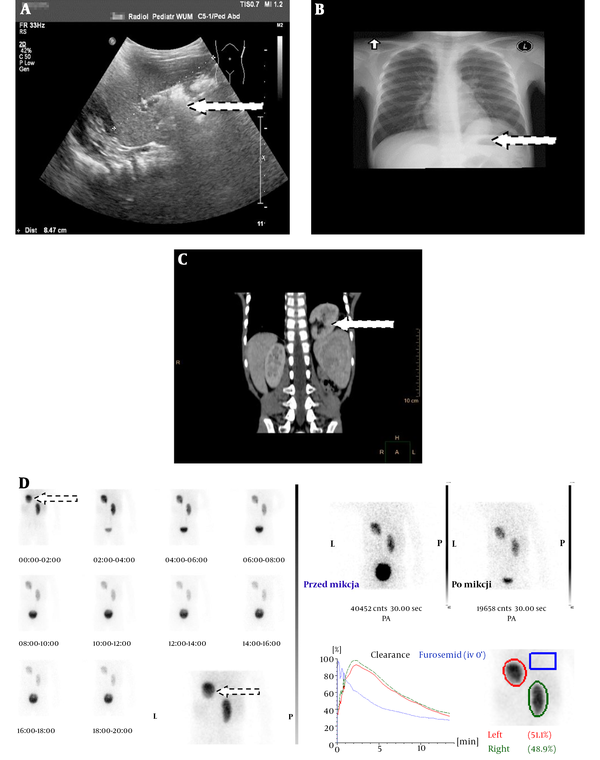 Case 1 (male): A, Ultrasonography of the left kidney above the spleen (spleen between the calipers); B, Posterior-anterior (PA) chest radiograph shows a mass above the left hemidiaphragm; C, Coronal CT scan shows the left kidney in the left posterior-interior thorax; D, 99mTc-ethylene-dicysteine (99mTc-EC) renal scintigraphy (PA).

A left-sided congenital diaphragmatic hernia was identified within the uterus. The initial chest X-ray on the first day of life showed the mediastinal shift of the heart to the right and an aberrant cardiac silhouette obscuring the left part of the diaphragm (Figure 2A). The abdominal USG revealed a typical right kidney location and an “absent” left kidney (Figure 2B). Contrast-enhanced chest and abdominal CT scans revealed a left-sided malrotated thoracic kidney (Figure 2C).

On the physical examination, the patient was tachypneic, and crepitant rales were heard in the basal segment of the left hemithorax. The renal function, urinalysis, and blood pressure were normal. She underwent surgery on the third day of life. The diaphragmatic defect was repaired primarily. The hernia bag was cut down to the edges of the diaphragm muscle, and the cavity was sutured without using a patch. The early postoperative period was free of complications. Because of recurrent herniation, she underwent surgery again after four months. 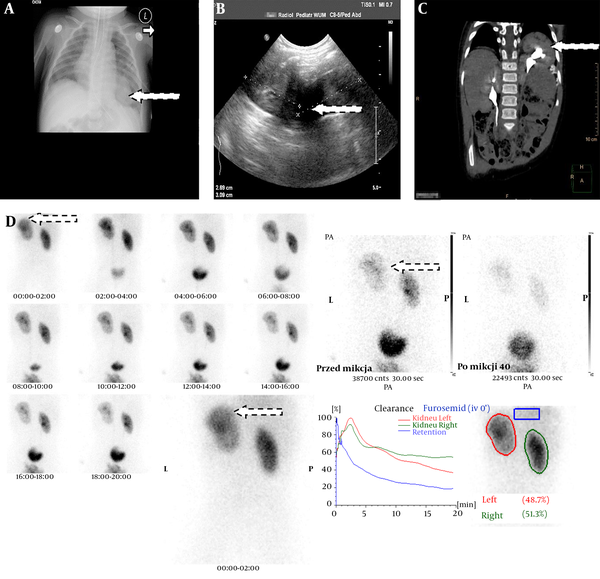 The 99mTc-EC renal scintigraphy was performed at the age of 17 months (Figure 2D). Two areas of focal tracer accumulation that corresponded functionally to two renal tissues were visualized. The thoracic location of the left kidney was determined. Both kidneys showed an efficient and adequate flow. The left thoracic kidney revealed 48.7% function in both kidneys on the split renal differential function tests. After five years of observation, her GFR was 84 mL/min/1.73 m2, and her blood pressure was 80/45 mmHg; in the urinalysis, unstable proteinuria up to 30 mg/dL was observed.

The thoracic ectopic left kidney was identified accidentally at the age of six years in this patient when an abdominal USG was performed because of abdominal pain. The left kidney was not present in the abdominal region, but was found on the chest USG (Figure 3A). The results of physical examination, renal function tests, urinalysis, and blood pressure were normal. 99mTc-EC renal scintigraphy was performed for this patient at the age of six years (Figure 3B). Two areas of focal tracer accumulation that corresponded functionally to two renal tissues were visualized. The thoracic location of the left kidney was determined, and both kidneys showed an efficient and adequate flow. The left thoracic kidney showed 58.3% of function in both kidneys on the split renal differential function tests. 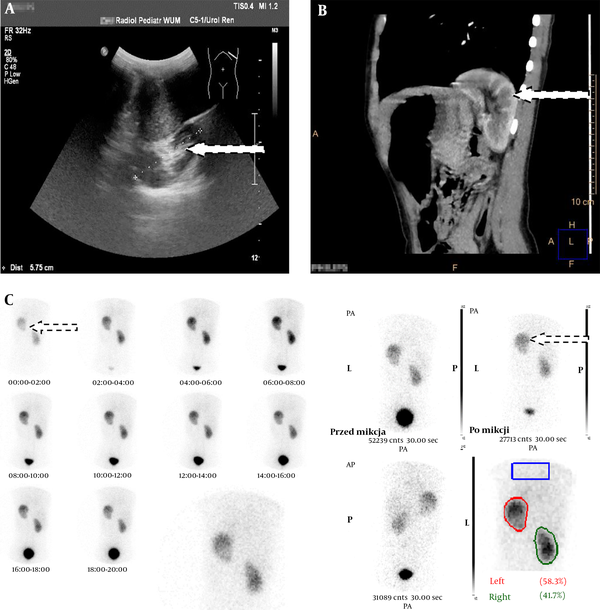 Since the publication of the first thoracic kidney report in 1930, fewer than 200 cases have been reported in the literature, mainly in adults (1, 2, 5). Less than 40 isolated cases of thoracic kidney have been reported in children over the past 30 years (1, 6). Among 156 children with renal ectopia diagnosed in our center, left thoracic localizations were found in three cases (1.9%). However, to the best of our knowledge, this is the largest group selected from one pediatric center in global reports.

In the literature, there are case reports that discuss the diagnosis, treatment, and follow-up of patients with thoracic ectopic kidney associated with a Bochdalek hernia (2, 4, 5). In our children, USG was the first diagnostic method to localize an ectopic kidney (1, 2). The 99mTc-EC renogram study not only can reveal the location of an “absent” kidney, but also helps demonstrate the functional renal parenchyma (7, 14, 15). In our patients, the function of all thoracic kidneys was comparable to the typically located ones.

Our literature review did not indicate any complications of thoracic ectopic kidneys, such as impaired renal function, hypertension, or proteinuria (1-3, 5, 6). Therefore, our observations differ from previous reports, because during the observation period (5 - 10 years), two children with thoracic kidney presented with unstable proteinuria/microalbuminuria and hypertension. Overall, 99mTc-EC renal scintigraphy is an uncomplicated and safe method for imaging thoracic kidneys and is used for detecting their function in children. Complications associated with thoracic ectopic kidneys, such as hypertension or proteinuria/ microalbuminuria, are possible. Also, children with thoracic kidneys need long-term follow-ups.