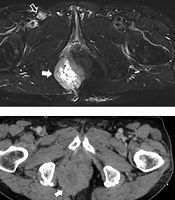 Primary lung cancer is the most frequent malignancy with bones, liver, adrenal glands, and brain as typical metastatic sites (1-4). Perianal/anal or perirectal/rectal metastasis of lung cancer is extremely rare, with only a few cases reported in the literature (1-8). The radiological features of gastrointestinal metastases, including the perirectoanal region, have not been fully investigated (1, 2). Herein, we report a case of perianal metastasis of small cell lung carcinoma (SCLC) with its imaging features. 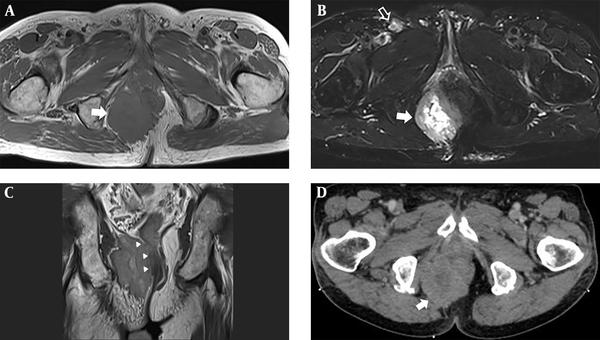 The patient underwent ultrasound-guided biopsy of the perianal mass with an 18-gauge core needle for histological confirmation. Histologically, the specimen was composed of nests of tumor cells with a hyalinized stroma (Figure 2A). The tumor was composed of small round cells with finely dispersed chromatin, nuclear molding, mitosis, and necrosis (Figure 2B). The tumor cells were diffusely positive for CD56 and cytokeratin on immunohistochemistry, implying metastasis from SCLC (Figure 2C and D) due to the histological and immunohistochemical features identical to those of lung cancer (image not shown). 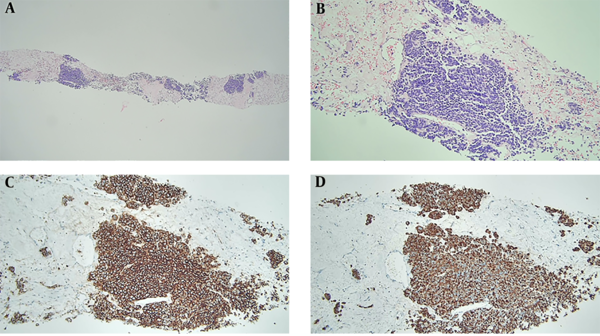 The palliative radiotherapy on the perianal area was performed with a daily dose of 250 cGy for 1 month, and a total dose of 5500 cGy. On follow-up after 1 year, pelvis CT scan revealed partial response based on RECIST 1.1 criteria with a significant decrease in the size of the perianal metastasis (2.8 × 2.7 × 1.9 cm). However, an enlargement in the right inguinal lymph node was observed (4 × 6.3 × 4.2 cm, image not shown).

SCLC is the most common primary pulmonary neuroendocrine malignancy, and the most common sites of metastases are the bones, liver, adrenal glands, and brain. Gastrointestinal metastases of primary lung cancer have been reported to have an incidence ranging from 4.7 to 14% on autopsy, and the small bowel is the most commonly reported site (1, 2). Perianal/anal or perirectal/rectal metastasis originating from primary lung cancer is extremely rare, with only 15 published reports (1-8). To the best of our knowledge, there are only three reports of perianal or perirectal metastases from SCLC, including the present study (6-8).

For treatment, patients should undergo systemic single chemotherapy or combined chemotherapy and radiation therapy (1). However, patients with perianal or perirectal malignancies may present with intestinal stenosis or obstruction, which requires urgent surgical intervention. Palliative surgery can also be performed in cases where hemorrhage and external mass cause severe discomfort to the patient (1). Pulmonary malignancy with gastrointestinal/colonic metastasis has been reported to have a poor prognosis, with a median survival time of 3 months (4). In the present case, radiation therapy was performed on the perianal area without surgical intervention since the patient had already been receiving systemic chemotherapy for SCLC.