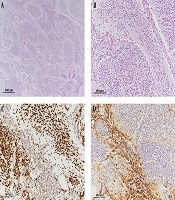 Medulloblastoma is the most common malignant tumor in children with a poor prognosis. According to the classification of the central nervous system (CNS) tumors in 2016 by the World Health Organization (WHO), medulloblastomas, in addition to four preexisting histopathological subtypes, are also classified into four molecular subgroups. Medulloblastoma with extensive nodularity (MBEN) is the rarest histopathological subtype, with an incidence of 3.2% - 4.2% in large case series (1). This variant appears at a relatively earlier age than other subtypes and is associated with better outcomes (2).

Radiologically, the unique grape-like pattern of MBEN with restricted diffusion aids preoperative diagnosis (3, 4). However, given the rarity of MBEN, the importance of specific magnetic resonance imaging (MRI) features other than diffusion-weighted imaging (DWI) remains under discussion. Herein, we report the case of a nine-month-old patient with MBEN associated with sonic hedgehog (SHH) activation and rare multimodal MRI features, even on DWI, susceptibility-weighted imaging (SWI), dynamic susceptibility contrast (DSC) perfusion imaging, and MR spectroscopy.

The patient was a nine-month-old female with a five-month history of enlarged head circumference and delayed motor milestones. An unenhanced brain computed tomography (CT) scan showed a large high-attenuation mass in the posterior fossa, which caused a significant mass effect with herniation through the tentorial incisura and resulted in obstructive hydrocephalus. The brain MRI revealed a large isointense mass with extensive gyriform enhancement and a convoluted pattern on T1-weighted image (T1WI) and T2-weighted image (T2WI) in the vermis and both cerebellar hemispheres. The mass showed a dense homogeneous enhancement following the intravenous injection of gadolinium, besides restricted diffusion on DWI and apparent diffusion coefficient (ADC) map. 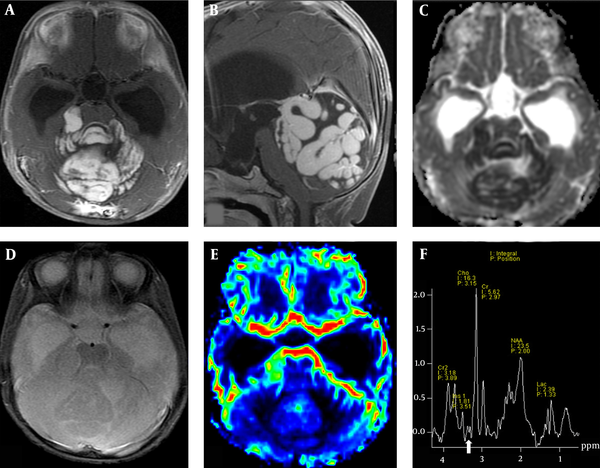 The patient underwent partial tumor resection through a suboccipital approach. Intraoperatively, a gray, hard, well-demarcated mass was found, originating from the cerebellar vermis. Postoperative pathological examination of the mass showed extensive nodularity with variable-sized lobules and interlobular areas. The cells within the lobules were small, round, and uniform and occasionally exhibited a neuropil-like streaming pattern in the fine stroma. The intralobular cells showed neurocytic maturation, as evidenced by strong immunoreactivity for synaptophysin and NeuN proteins.

For a better genetic characterization, immunohistochemistry of the representative surrogate markers was performed. Immunoreactivity for beta-catenin was negative for assessing the WNT-activated subtype, whereas GAB1 was strongly reactive in tumor cells between the lobules for assessing the SHH-activated subtype (Figure 2). The histological findings were consistent with MBEN with activated SHH (WHO grade IV). Subsequently, the patient was treated with six cycles of high-dose chemotherapy, consisting of alternating cisplatin, etoposide, cyclophosphamide, vincristine, carboplatin, etoposide, ifosfamide, and vincristine regimens with autologous peripheral blood stem cell transplant (PBSCT). 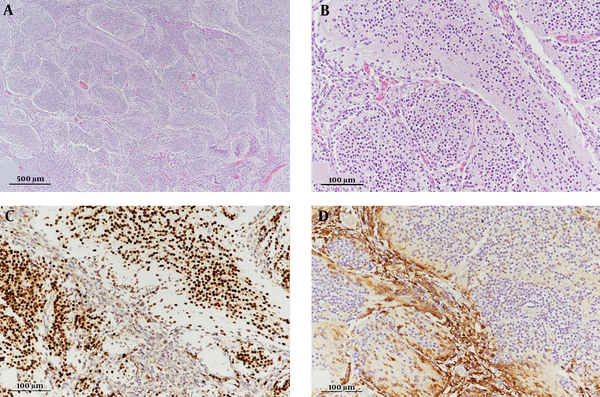 The two-month follow-up MRI after completing two cycles of chemotherapy and PBSCT showed marked shrinkage of the remnant lesion in the posterior cranial fossa. Most of the remnant lesion, which previously showed contrast enhancement, did not exhibit any enhancement; also, diffusion restriction was normalized to that of physiological conditions. Besides, serial MRI was performed for 39 months. Subsequent MRI showed more atrophic changes and complete regression of the remnant lesions without regrowth.

MBEN is a rare embryonal tumor of the cerebellum, characterized by a distinct and diffuse nodular architecture. This variant occurs in infants and very young children and is associated with an excellent prognosis if treated properly. In the latest WHO classification of CNS tumors, medulloblastomas have been classified into four subtypes according to their genetic characteristics, besides the preexisting histopathological classifications, for a better prediction of treatment response and prognosis.

Among different molecular subtypes, the majority of MBENs are in the SHH-activated group (5). This subgroup, characterized by the upregulation of genes in the SHH signal transduction pathway, has been identified as the second most common subtype, accounting for 15% - 25% of medulloblastomas, with more favorable outcomes (6). In our case, we confirmed immunoreactivity for GAB1 protein, which is a surrogate marker of SHH signaling activity in the internodular regions via immunohistochemistry; therefore, favorable treatment outcomes were expected. However, not all MBENs are SHH-activated medulloblastomas, and it has been rarely reported that they have a more aggressive type of molecular profile (group III or IV) (5).

Despite the rarity of MBEN, its conventional MRI-based morphological features are relatively well-known. They usually present as isointense to hypointense lesions on T1WI images and as isointense to hyperintense lesions on T2WI images; they predominantly show a homogeneous contrast enhancement, similar to classic medulloblastomas. The distinctive imaging feature of MBEN, which clearly distinguishes it from other subtypes of medulloblastoma, is the remarkably nodular appearance of the solid component, described as a “grape-like” pattern (3). This unique finding reflects the histological feature of MBEN, that is, an expanded lobular architecture composed of variable-sized lobules and interlobular areas. Rare cases of peculiar gyriform with well-defined, enlarged cerebellar folia, rather than a nodular pattern, have been reported (7); a striking gyriform pattern was more prominent in our case. However, there is no known clinical or pathological difference between these two different morphological patterns.

Among advanced MR modalities, the findings of DWI for MBEN have been reported. MBEN shows a high signal intensity on DWI and low ADC values, similar to other subtypes of medulloblastoma, due to densely packed cells and a high nuclear-cytoplasmic ratio (8). These DWI features play an important role in discriminating between medulloblastomas and other posterior fossa tumors. In our case, the mean ADC (×10-3 mm2/s) was 0.69, which is comparable to the mean ADC range of 0.59 - 0.81 for MBEN in the literature (8, 9).

Moreover, DWI is helpful for monitoring the tumor response to therapy. Chemotherapy increases the ADC value by decreasing cellularity and increasing the extracellular space, while signal intensity on the ADC map reduces again in case of recurrence (2). According to the DWI of our case two months after chemotherapy, the previous restricted diffusion disappeared, indicating that MBEN responded very well to treatment; also, no decrease in ADC was observed in the follow-up images thereafter.

It has been reported that perfusion increases due to high microvessel density and elevated levels of vascular endothelial growth factor (VEGF) receptors in most cases of medulloblastoma in children, based on arterial spin labeling (ASL) or DSC (12, 14, 15). Unlike previous reports, the rCBV based on DSC was low in our case. Overall, the perfusion imaging results are significantly related to tumor grading and survival. Therefore, MBEN with the most favorable prognosis shows a lower rCBV than previous studies which did not include MBEN. In the present case, these findings were correlated with pathological findings for the lack of neovascularity. Besides, no calcification or hemorrhage was observed on SWI. Compared to other pediatric posterior fossa tumors, calcification and hemorrhage are less frequent in medulloblastomas, which is consistent with our findings.

Besides unique morphological features, another striking aspect of MBEN is its very good prognosis. Despite treatment with surgery, radiation, and chemotherapy, the five-year disease-free survival rate of medulloblastomas, excluding MBEN, is only 40% (16). Although studies are lacking due to the rarity of MBEN, several researchers have estimated an overall survival rate of more than 90% (4, 7, 17). This great improvement in the overall prognosis of MBEN may be related to higher chemosensitivity and neurocytic or gangliocytic maturation after chemotherapy and radiation (18).

Our patient was treated with postoperative chemotherapy and autologous PBSCT without radiotherapy. Contrast enhancement and diffusion restriction in the remaining tumor immediately improved on MRI performed two months after surgery, and no recurrence was observed during the 39-month follow-up. This result is consistent with several previous reports of complete remission in MBEN patients, who were treated with postoperative chemotherapy alone (3, 6, 18). In the MBEN treatment protocol, reduction of radiation dose or complete elimination of radiotherapy, which causes many adverse events in very young children, may be another important factor for obtaining better treatment outcomes.

In conclusion, we described a case of SHH-activated MBEN with multimodal MRI features. Conventional MRI showed unique morphological characteristics, based on which a precise preoperative diagnosis could be made. Previously unknown advanced MRI features of MBEN, such as lower Tau concentration and lower rCBV, which are considered to be associated with a good prognosis, were also confirmed. An excellent outcome was achieved with postoperative chemotherapy and autologous PBSCT in our case. Therefore, radiologists should be familiar with these radiological features to avoid unnecessary aggressive surgeries or radiation treatments and establish a proper treatment plan for MBEN.