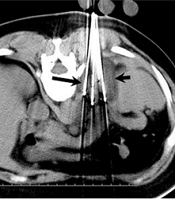 Computed tomography (CT)-guided ablation has been used to treat adrenal metastasis (AM). However, the incidence of AM secondary to non-small-cell lung cancer (NSCLC) has not been investigated.

To assess the clinical efficacy of CT-guided cryoablation for treating AM secondary to NSCLC.

This retrospective study was performed among patients with AM secondary to NSCLC, undergoing CT-guided cryoablation in our hospital. The rates of complete ablation, local recurrence, local recurrence-free survival (RFS), systematic RFS, and overall survival (OS) were also analyzed.

CT-guided cryoablation can be a safe and effective treatment to control AM secondary to NSCLC.

Malignant tumors often metastasize to the adrenal glands (1-3), and up to 27% of patients with known malignant tumors exhibit adrenal metastasis (AM) upon autopsy (4, 5). So far, no clinical trial has been conducted to establish the benefits of local AM treatment. However, multiple studies have proposed that surgical resection may improve the survival outcomes in patients with isolated AM (6-10). Laparoscopic adrenalectomy (LA) is commonly used to treat adrenal tumors (6-8). However, it is not an appropriate treatment for patients with certain comorbidities and is associated with prolonged postoperative hospitalization (1). Percutaneous ablation strategies have been used to treat adrenal tumors, with 89 - 100% complete ablation rates (11-13). Generally, ablation is less invasive and more cost-effective than LA (14).

Multiple studies have used computed tomography (CT)-guided ablation to treat AM (1-3), achieving local one-year recurrence-free survival (RFS) rates of 71 - 82% (1, 2). However, these studies have evaluated AM secondary to multiple primary cancers (e.g., lung, liver, renal, and colorectal cancers), which can potentially cause selection bias in the results (1-3). However, the clinical effectiveness of ablation for AM secondary to a specific malignant tumor has not been evaluated in more detail in previous studies (1-3). In this regard, Hasegawa et al. (1) performed radiofrequency ablation for 35 patients with AM and found that AM from non-small-cell lung cancer (NSCLC) was a significant indicator of poor prognosis. Therefore, it is important to conduct studies to specifically evaluate the treatment of AM secondary to NSCLC.

This study was designed to assess the efficacy of CT-guided cryoablation as a treatment for AM secondary to NSCLC.

The Institutional Review Board approved this retrospective single-center study, and the requirement for written informed consent was waived.

This study enrolled consecutive patients with AM secondary to lung cancer, undergoing CT-guided cryoablation in our hospital between January 2015 and December 2019. The inclusion criteria were as follows: (1) patients who were not eligible for surgery or refused surgical resection; (2) patients who had undergone surgical resection of primary NSCLC; (3) patients with AM ≤ 5 cm in size; and (4) patients with no extra-adrenal tumors at the time of admission. Patients were excluded if they exhibited adrenal vein invasion or had infections, active bleeding, or significant coagulation disorders.

AM secondary to NSCLC was diagnosed based on the patient’s history, abdominal CT results, and percutaneous biopsy.

Patients were placed in the prone position for access to the posterior anatomic structure, and all procedures were guided by CT scan (Philips, Amsterdam, Netherlands) under local anesthesia. Argon-helium cryoablation (CryoHit, Galil Medical, Israel) was conducted under local anesthesia. Each cryoprobe had a 1.5 × 3.5 cm freezing area. Abdominal CT scans were used to locate the tumors in patients and to assess the size of these tumors (Figure 1A). Next, the cryoprobes were distributed according to tumor shape and size (Figure 1B). Since the edge of the freezing area had a temperature of 0°C, while a temperature below -40°C is necessary to kill the cells, the overall freezing area was approximately 0.5-1 cm beyond the tumor edge, with a ≤ 1.5 cm interval between pairs of cryoprobes (3).

A 59-year-old man with left AM after lung squamous cell carcinoma (SCC) resection. (A) Contrast-enhanced CT images of a left adrenal metastasis (AM) exhibiting significant enhancement (arrow). (B) Cryoablation procedures. The cryoprobes (long arrow) were placed into the tumor, and the frozen area could be seen on the CT image (short arrow). (C) Contrast-enhanced CT scan, indicating no visible tumor enhancement after treatment (arrow).

Following cryoprobe placement, tumors were subjected to two freeze-thaw cycles (ten minutes of freezing, followed by three minutes of thawing). Freezing was performed through rapid argon gas expansion in the sealed cryoprobes, which reached a minimum tip temperature of -140°C within a few seconds. Thawing was then performed by replacing argon with helium gas. For confirmation of the frozen tissue dimensions, abdominal CT scans were acquired repeatedly following the cryoablation protocols.

After cryoablation was completed, the patients were closely monitored for approximately 30 minutes and subsequently returned to the general ward if no discomfort was observed. The patients’ vital signs were also monitored for an additional six hours.

Follow-up was routinely conducted from the time of treatment until death or until the last visit during the study. All data were collected in December 2020. Once per month, the patients underwent a standard physical examination and blood collection for laboratory examinations, including blood cell count and adrenal hormone measurements. Besides, postoperative CT scanning was conducted at 1, 3, 6, and 12 months following treatment and every 12 months thereafter.

SPSS version 16.0 (SPSS Inc., IL, USA) was used for statistical analysis. Continuous data are presented as mean and compared using t-test. Categorical and numerical data were compared via χ2 test and Fisher’s exact test. Kaplan-Meier curves were also used to assess the patients’ survival, and a log rank test was used to compare the survival duration. Moreover, a Cox regression analysis was used to assess the association between survival time and one or more predictive factors. Covariates that yielded a P-value < 0.1 in the univariate analysis remained in the multivariate analysis. The level of statistical significance was set at P < 0.05.

Thirty-four consecutive patients with AM secondary to NSCLC, undergoing cryoablation, were analyzed in this study. Each enrolled patient had a single AM. The mean number of used cryoprobes was 2.7 (range: 1 - 4). The primary NSCLCs included squamous cell carcinoma (SCC) (n = 16) and adenocarcinoma (n = 18); there was no other pathological type of primary NSCLC in this study. The baseline data of the patients are presented in Table 1.

Table 1. The Baseline Data of 34 Patients Included in This Study

The mean and median follow-up of the patients were 28.8 ± 15.9 and 22 months, respectively. No patient was lost to the follow-up. The mean follow-up duration was significantly longer in the SCC group as compared to the adenocarcinoma group (35.9 ± 14.9 vs. 22.6 ± 14.4 months) (P = 0.013). There were six and seven patients in the SCC and adenocarcinoma groups, who underwent chemotherapy after cryoablation, respectively (P = 0.311).

Moderate blood pressure increases were observed in 7/34 (20.6%) patients during cryoablation (n = 5 in the SCC group and n = 2 in the adenocarcinoma group) (P = 0.306). The increase in systolic or diastolic blood pressure was less than 10 mmHg in these seven patients. They were treated with alpha-blockers immediately after the cryoablation procedure was completed and were closely monitored until their blood pressure returned to normal. No patient suffered from a hypertensive crisis, hematoma, hemorrhage, or damage to the surrounding tissues following cryoablation.

Commonly, AMs are treated via CT-guided radiofrequency ablation and microwave ablation (1, 2, 13). More recently, cryoablation approaches have been applied to treat AM and other malignant tumors, since they cause less pain, allow for visualization of the treatment zone, and are beneficial for better healing (3, 12). Our findings suggested that CT-guided cryoablation can be a safe and effective treatment to control AM secondary to NSCLC. The success rates of primary and secondary ablations in the present cohort were 91.1% and 100%, respectively. These high success rates might be attributed to the mean AM size in this study (3 cm).

A previous study on CT-guided AM ablation showed that the OS of patients with AM secondary to NSCLC was significantly lower than that of patients with AM secondary to other cancer types (1). In this study, we found that the median OS was 34 months in all patients, which is longer than 18.9 months reported in a previous study (1). This discrepancy might be attributed to different patient inclusion criteria, as all of our patients had undergone surgical resection of primary NSCLC.

We also found that the median OS was significantly longer in the SCC group as compared to the adenocarcinoma group (56 vs. 22 months) (P = 0.009). The Cox regression analysis also revealed that primary SCC was a predictor of longer OS. It was also shown that the NSCLC subtype is an important determinant of metastasis and patient survival. Many studies have reported that lung adenocarcinoma is more prone to lymph node metastasis than SCC (17, 18). This may explain why patients with primary SCC in our study had a longer OS as compared to patients with adenocarcinoma. Age and stage III primary NSCLCs were both independent predictors of OS in our cohort. Age was likely to be an adverse prognostic factor, partly because older patients were often immunocompromised; therefore, tumors in older patients progress faster than younger patients (1).

Chemotherapy is a common procedure to treat NSCLC. However, in our multivariate Cox regression analysis, no significant association was found between chemotherapy and patient survival (P = 0.090). This may be attributed to the limited sample size of this study. Further studies on a larger cohort of patients are warranted to determine whether chemotherapy exerts beneficial effects on patient survival. The ablation of adrenal tumors has been found to be associated with the incidence of a hypertensive crisis (2, 11). It is known that a thermal ablation causes significant temperature increases in the target tissues and is associated with higher hypertensive crisis rates as compared to other forms of ablation (3). Several moderate hypertension cases were identified and provided with timely blood pressure control medications. However, no case of a hypertensive crisis was found in the present cohort; therefore, timely blood pressure control after cryoablation may decrease the incidence of a hypertensive crisis (3).

There are several limitations to this study. Firstly, this was a retrospective analysis and is therefore, subjected to selection bias. Secondly, this was a single-center study with a small sample size; therefore, caution must be taken when generalizing the results to a larger patient population or over longer follow-up periods. Thirdly, this study did not include a comparison group of patients with some other forms of ablation; therefore, further multi-center randomized controlled trials are crucial to validate and expand these findings. Fourthly, only some of our patients received postoperative chemotherapy, based on their clinical status. Some of the patients did not receive chemotherapy because of their poor economic status, while some patients refused to receive chemotherapy after cryoablation; this definitely increased the risk of bias.