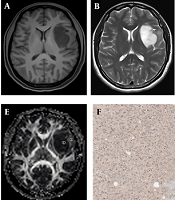 Most brain gliomas are high-grade and likely to spread locally. Consequently, these patients commonly have a poor prognosis. Accurate identification of the malignancy grade of brain glioma before treatment is of great clinical significance.

A total of 116 patients were selected for this study from January 2018 to December 2019. All the participants underwent magnetic resonance imaging (MRI) and DTI before surgery, and the FA and ADC values were measured for the regions of interest. Surgically resected tumor specimens were collected for immunohistochemical assay. Finally, the FA and ADC values and positive expression rates of VEGF and Ki-67 were compared.

The FA value, as a DTI parameter, is valuable for assessing the malignancy grade of tumor cells and can provide a proper reference for formulating treatment regimens for brain gliomas.

Brain glioma is the most common primary craniocerebral tumor, caused by the progression of cancer in glial cells in the spinal cord. Patients mainly experience headache, seizures, nausea, vomiting, hemidysesthesia, and blurred vision. Besides, this type of tumor seriously affects the function of local brain tissues (1, 2). Most brain gliomas are high-grade and likely to spread locally; consequently, patients commonly have a poor prognosis. Since different grades of brain gliomas have different treatment options, accurate identification of the malignancy grade before treatment is of great clinical significance (3-5).

Magnetic resonance imaging (MRI) can be used to determine the location of brain tumors, invasiveness of tumors into the surrounding normal brain tissues, and source and type of tumor tissue (6). However, it cannot accurately represent the pathological grade or microscopic histological characteristics of tumors, which in turn increases the difficulty of formulating a suitable treatment regimen and directly affects the patient prognosis (7). Therefore, it is necessary to find an approach that can accurately reflect the pathological features of tumors.

Diffusion tensor imaging (DTI) is derived from diffusion-weighted imaging (DWI). The DTI parameters can be used to reflect the diffusion of water molecules in brain tissues, which is valuable for assessing the grade of brain glioma, integrity of nerve fiber bundles, and peritumoral edema (8). As vascular endothelial growth factor (VEGF) can promote neovascularization, it plays a pivotal role in the progression of multiple malignancies (9, 10). Additionally, Ki-67 is a nuclear proliferation-related antigen, the expression of which is closely associated with the proliferation of tumor cells (11).

This study aimed to investigate the correlation of DTI parameters with the pathological parameters of brain glioma and VEGF and Ki-67 expression to provide a reference for formulating early diagnosis and treatment plans for brain glioma.

A total of 116 patients with brain glioma, confirmed by a pathological examination in Beijing Huairou Hospital (Beijing, China) from January 2018 to December 2019, were enrolled in this study. The inclusion criteria were as follows: undergoing DTI; images of ideal quality; and brain glioma confirmed by a pathological examination. On the other hand, patients with other craniocerebral tumors were excluded. This study was approved by the hospital ethics committee [approval No.: Beijing (Huairou)-2019-006-01]. The ethical approval file was not available online at the time of approval (in 2018), and it is not linked to a webpage. Written informed consent was obtained from all the participants in this study.

The scanning data were transmitted to a workstation (Siemens, Germany), and FA and ADC maps were automatically generated through smoothing and interpolation using a supporting software package (Syngo MRB17). According to contrast-enhanced T2WI or T1WI findings, the largest representative tumor slice was selected for each patient, and peritumoral edema, tumor parenchymal, cerebrospinal fluid, and white matter areas on the opposite side of the same anatomical site (normal brain) were considered as the regions of interest (ROIs), which were 20 - 40 pixels in size. They were measured three times based on experience, and the average values were calculated. Finally, the FA and ADC values of each ROI were calculated. The procedures were conducted by the same radiologist with 10 years of experience in analyzing images.

3.4. Detection of VEGF and Ki-67 Expression in Pathological Tissues

All data were statistically analyzed in SPSS version 23.0 (released in 2015, IBM SPSS Statistics for Windows, IBM Corp., Armonk, NY, USA). Numerical data, including the positive expression rates of VEGF and Ki-67 and sex ratio, were expressed as rate (%) and compared using χ2 test. The normal distribution of the collected data was assessed using Kolmogorov-Smirnov test, and all data were found to be normally distributed. The ADC value, FA value, and other quantitative data are presented as mean ± standard deviation (SD). Comparison of FA and ADC values between different ROIs was performed using analysis of variance (ANOVA), and pairwise comparisons between groups were performed by post hoc test. Moreover, Spearman’s test was conducted to explore the correlation between the ADC and FA values and expression rates of VEGF and Ki-67. A P-value less than 0.05 was considered statistically significant. 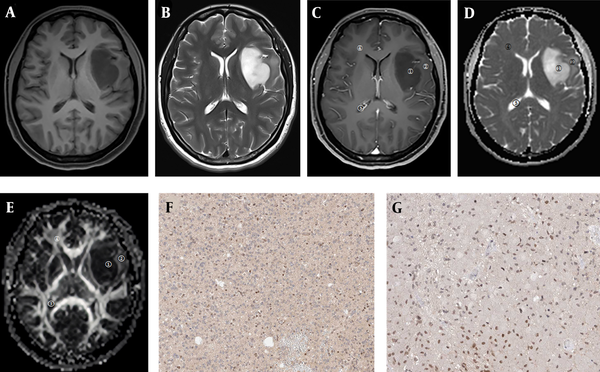 4.3. Relationship of Pathological Grade with FA and ADC Values of Tumor Parenchymal Area

The high-grade group showed a significantly higher FA value and a lower ADC compared to the low-grade group (P < 0.001) (Table 2).

Table 2. Comparison of FA and ADC Values Between High- and Low-Grade Gliomas in the Tumor Parenchymal Area

4.4. Correlation of Pathological Grade with VEGF and Ki-67 Expression

The positive expression rates of VEGF and Ki-67 were significantly higher in the high-grade group compared to the low-grade group (P < 0.05) (Table 3).

Table 3. Comparison of VEGF and Ki-67 Expression Between High- and Low-Grade Gliomas

Table 4. The FA and ADC Values of Different ROIs

4.6. Correlations of DTI and Pathological Parameters

DTI is developed from DWI with directional gradient magnetic fields. The FA and ADC maps are obtained through recombination of DWI images, indicating the diffusion features (15). DTI focuses on the motion anisotropy of water molecules, involving two independent parameters, namely, ADC and FA. The former represents the diffusivity of water molecules, while the latter is used to quantify the anisotropy of water molecules. The FA value is affected by the density of tumor cells, integrity of the white matter fiber myelin sheath, and tumor extracellular matrix (16). The malignancy grade of glioma cells is usually rated based on nuclear atypia, mitosis, and endothelial status (necrosis/viability). Changes in these characteristics influence the FA and ADC values. Therefore, it is highly reliable to determine the malignancy grade of tumor cells by measuring the FA and ADC values (17).

In this study, the FA and ADC values varied among patients with gliomas characterized by different degrees of malignancy, which is consistent with previous research (18). The observed differences may be attributed to differences in the severity of damage to the surrounding tissues by tumors with various grades of malignancy, invasive growth, and edema. Compared to low-grade glioma cells, high-grade glioma cells exhibit more obvious invasive growth and edema and cause more severe damage to the surrounding tissues. Therefore, high-grade gliomas have higher FA values and lower ADCs. These values differ among various ROIs, probably because the structures of cells and tissues are destroyed by tumor cells (19).

VEGF directly contributes to tumor neovascularization as the main route for tumors to receive hydrogen and nutrients, which is also dominant in tumor invasion and metastasis. Consequently, the expression of VEGF is closely associated with the progression of malignant tumors (20-22). Generally, Ki-67 can reflect the proliferation of tumor cells. Its expression can be detected in G1, S, G2, and M phases, while it quickly disappears in the late M phase. Moreover, Ki-67 has a short half-life, and cell proliferation can be determined by measuring its expression level (23). This study revealed that the positive expression rates of VEGF and Ki-67 were significantly higher in the high-grade group compared to the low-grade group (P < 0.05), mainly because high-grade brain gliomas were more susceptible to neovascularization, and tumor cells proliferated more vigorously. However, the correlation between the ADC value and Ki-67 expression remains controversial. In this regard, Martino et al. reported that the ADC value was negatively correlated with Ki-67 expression (24), whereas Engelhorn et al. found no obvious correlation between the ADC and Ki-67 expression (25); the difference observed in the ROI selection may yield different results due to the heterogeneity of tumors.

Based on the findings, the FA value of DTI is of great significance for glioma diagnosis regarding the following aspects. First, the FA value is highly reliable for the evaluation of tumor cell malignancy and aids in the preoperative grading of gliomas and differential diagnosis of low- and high-grade gliomas. Second, the FA value is not only affected by the content of extracellular water molecules, but also related to the destruction and displacement of white matter bundles due to tumor cell invasion. Therefore, the FA value can reflect peritumoral edema to a certain extent and is conducive to determining tumor invasion. Third, the FA value allows for a non-invasive evaluation of the pathological characteristics of tumor tissues before operation, thereby providing valuable information for the formulation and implementation of surgical regimens. Fourth, the FA value provides a basis for the selection of target areas and reduces unnecessary damage in radiotherapy. Fifth, DTI is sensitive to changes in the diffusion of water molecules, which plays a crucial role in monitoring the treatment outcomes (26, 27). Therefore, it can be used as a sensitive index for determining recurrence and evaluating prognosis.

In conclusion, the FA value as a DTI parameter is highly valuable for assessing the malignancy grade of tumor cells and is applicable for the clinical diagnosis and treatment of brain glioma.

This study was not financially supported.

Copyright © 2022, Author(s). This is an open-access article distributed under the terms of the Creative Commons Attribution-NonCommercial 4.0 International License (http://creativecommons.org/licenses/by-nc/4.0/) which permits copy and redistribute the material just in noncommercial usages, provided the original work is properly cited.
download pdf 3.33 MB Get Permission (article level) Import into EndNote Import into BibTex
Number of Comments: 0