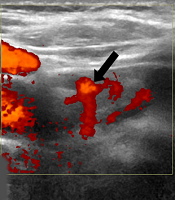 A 77-year-old man presented a 3.5-cm parathyroid adenoma with mixed cystic and solid components. He was ineligible for parathyroidectomy because of his age and the surgical history of the coronary artery bypass graft. First, EA was performed to remove cystic component. After that, the volume of parathyroid adenoma was decreased (volume reduction rate: 94%); however, the level of serum parathyroid hormone (PTH) was persistently high (88 pg/mL). Subsequent RFA was performed to remove the remaining parathyroid adenoma. Further, it was completely disappeared on the following ultrasound examination, and PTH was normalized. The results during a 2-year follow-up confirmed clinical success, and no relevant complication was reported.

The combination therapy of EA and subsequent RFA is safe and effective as an alternative therapeutic method to treat PHPT in patients ineligible for parathyroidectomy.

Primary hyperparathyroidism (PHPT) is one of the endocrine disorders arising from the head and neck area with a prevalence rate of 0.1 - 0.4% (1), characterized by the elevation of serum parathyroid hormone (PTH) with or without hypercalcemia. PHPT is mostly induced by parathyroid neoplasm. Parathyroid adenoma, with a prevalence rate of 85 - 90%, is more frequent than parathyroid hyperplasia (2, 3). Parathyroidectomy is a standard method to treat PHPT. However, the mortality and morbidity of surgery are increased in patients aged above 65 years or have cardiovascular and respiratory diseases since general anesthesia and following hospital admission for several days are required (4). Recently, minimal invasive treatment modalities such as ethanol ablation (EA), radiofrequency ablation (RFA), and microwave ablation have been introduced to treat PHPT to inactivate parathyroid neoplasm and normalize serum PTH and calcium (5-7). Previous studies have reported the efficacy of a single non-surgical therapeutic modality of EA, microwave, or RFA (5-7). This report introduces the combination therapy of EA and subsequent RFA for a case with PHPT. Technical success to treat parathyroid adenoma was obtained by EA; however, serum PTH was persistently high after EA. Clinical success was also reported after subsequent RFA for a 2-year follow-up.

A 77-years old male presented with discomfort in his right lower neck for several years. He had medication for long-standing hypertension, dyslipidemia, and gout. He had a surgical history of coronary artery bypass graft for myocardial infarction 18 years ago and no history of renal calculi or severe bone diseases. Physical examination revealed a gentle palpable mass in the right lower neck. The laboratory findings of the blood test showed elevated serum PTH (80 pg/mL, normal range: 15 - 65), upper normal limit of calcium (10.4 mg/dL, normal range: 8.8 - 10.5), normal ionized calcium (1.3 mmol/L, normal range: 1.05 - 1.35), and normal phosphorus (3.2 mg/dL, normal range: 2.5 - 4.5). Ultrasound (US) examination results reported a single 3.5 × 1.4 × 2.4 cm (volume: 6.12 cc) circumscribed oval mixed cystic and solid mass in the right inferior thyroid bed (Figure 1A), for which no invasion to adjunct thyroid tissue or organs was reported. No additional extrathyroid mass was noticed in the other sites of bilateral thyroid beds. Power Doppler examination suggested vascularity with an arc of vessels in an intranodular solid component. 99mTechnetium-sestamibi scintigraphy showed a focal hot uptake of radionuclide at the early and delayed phases in the right lower thyroid bed. Parathyroid adenoma was diagnosed through US-guided fine needle aspiration, in which the washout PTH value from the aspirated specimen was 28,500 pg/mL. Bone marrow densitometry revealed osteopenia for the lumbar spine, hip, and forearm. 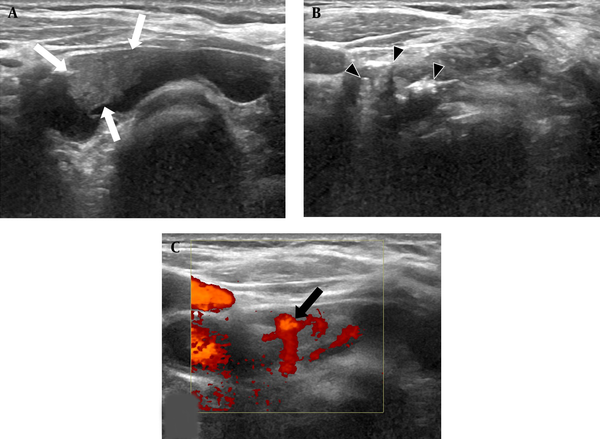 The physician recommended non-surgical treatment because of the patients’ age and the high risk of morbidity following parathyroidectomy and general anesthesia. First, US-guided EA was advised to remove a cystic portion of the parathyroid adenoma. Under the local anesthesia of 1% lidocaine, intranodular fluid was aspirated using a 21-gauge plain needle (amount: 4cc, color: transparent yellowish). Then 2 cc of 99% sterile ethanol was injected to the remaining cystic and solid components (Figure 1B). Following the EA procedure, hematoma or voice change was not detected. On the follow-up ultrasound examination one month after EA, the nodule size was 1 × 0.7 × 1 cm (volume: 0.36 cc, volume reduction rate; 94%). Its cystic component completely disappeared; however, a solid component with intranodular vascularity remained (Figure 1C). According to laboratory findings, serum PTH was not normalized (value: 88 pg/mL) two months after EA. Serum calcium was normal (9.8 mg/dL).

Subsequently, the ultrasound-guided RFA was performed to remove the remaining solid component of parathyroid adenoma using a cool-tip radiofrequency system with an 18 gauge straight-type internally-cooled electrode (Radio Frequency Thyroid-RF Electrode, RF medical, Seoul, Korea). Following the local anesthesia of 1% lidocaine, an electrode was inserted into the target lesion using a lateral needle approach. The unit-by-unit ablation with the moving shot technique was applied to cover the whole area of the parathyroid adenoma. The procedure was completed under the following conditions: procedure time: 19 min, ablation time: 3 min, ablation power range: 20 - 30 W, and total energy: 2460 J (Figure 2A). Hydrodissection using normal saline or dextrose was not applied. Following the RFA procedure, no complication, including hematoma or voice change, was detected. The informed consent was separately obtained for the two procedures. 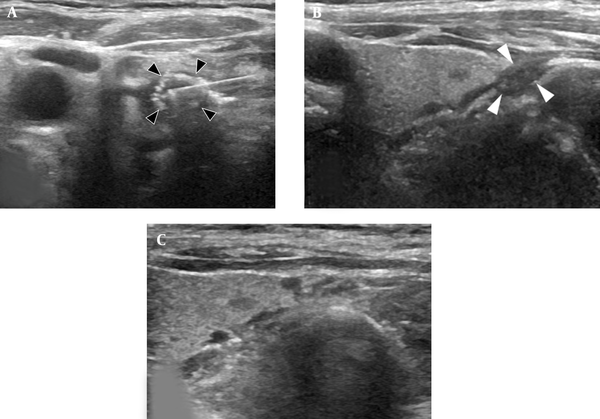 The follow-up nodule size was 0.5 × 0.4 × 0.7cm (volume: 0.07 cc, volume reduction rate: 98.8%) three months after RFA (Figure 2B). It completely disappeared after 10 months (volume reduction rate: 100%) and was not identified on after two years (Figure 2C). According to the laboratory findings, serum PTH was normal (63 pg/mL), and calcium level decreased (9.1 mg/dL) on follow-up three months after RFA. However, serum PTH also gradually increased: 71 pg/mL after nine months and 74 pg/mL after two years. The levels of calcium and phosphorus were normal range during the two-year follow-up.

This PHPT case was effectively treated by the combination therapy of EA and subsequent RFA. By EA, the cystic component of parathyroid adenoma was effectively removed; however, the solid component considerably remained. By subsequent RFA, the remaining parathyroid adenoma was removed entirely, resulting in the clinical success during follow-up; however, complete biochemical remission was not sustained. Procedure-related complications, such as hematoma and recurrent laryngeal nerve injury, were not noticed. The combination therapy of EA and subsequent RFA is safe and effective and can be considered an alternative therapeutic method for PHPT treatment, especially for patients with high morbidity and mortality of parathyroidectomy.

For several decades, percutaneous EA has been used to treat symptomatic thyroid cysts or cystic nodules in the head and neck areas. The mechanism of ethanol has the following two effects: (1) the coagulative necrosis of target tissue due to cell dehydration and protein denaturation; and (2) ischemic necrosis caused by small blood vessel thrombosis and the inhibition of enzymatic activity in surrounding tissues (8). EA has been established as the first treatment modality alternative to treat cystic thyroid disease since EA has some benefits, including cost-effectiveness, easy accessibility, and repeatability based on outpatient departments. EA has also been introduced in the literature as an alternative therapeutic approach to treat parathyroid adenoma with a relatively high response rate (Table 1) (5, 9, 10). Yazdani et al. used EA for treating 39 cases with parathyroid adenomas and demonstrated a 46% therapeutic response rate for a one-month follow-up and 84.5% for a 12-month period to decrease serum PTH and calcium. However, no major complication was reported by these researchers (5). Ha et al. reported the acceptable outcome of 98.5% mean volume reduction rate for EA in treating eight cases with nonfunctioning parathyroid cysts on a six-month follow-up. In their study, one case had transient voice change after EA, which was recovered spontaneously within two months (7).

Table 1. Literature Review of Laboratory and Radiologic Findings of EA and RFA to Treat Primary Hyperparathyroidism

Percutaneous RFA has been mainly applied to treat benign thyroid nodules in the head and neck area for a decade. The RFA mechanism has the following two effects: (1) friction heat damage by tissue agitation, which results promptly in protein denaturation and irreversible cell death around an electrode; and (2) conduction heat damage, which slowly destroys the remote tissue around the ablation zone (12). RFA has been demonstrated to be more efficient than EA in treating solid thyroid nodules (13). RFA has been recently introduced as an alternative treatment modality for PHPT (Table 1). The effectiveness of RFA in treating PHPT has been reported from 50% to 89.9% for short-term or intermediate-term follow-ups (3, 7, 11). Wei et al. reported that the cure rate of RFA for treating 23 parathyroid adenoma cases was 87% (20 out of 23) on a six-month follow-up to normalize serum PTH and calcium, and that the complication rate was 4.3% (1 out of 23) (3). Ha et al. documented that the clinical outcome of RFA in treating 11 cases with PHPT was 63.6% (7 out of 11), and that complete biochemical remission was 63.6% (7 out of 11) and complication rate was 9% (1 out of 11) with transient hypocalcemia, which was spontaneously recovered within a few days (7). Korkusuz et al. found that the clinical outcomes of RFA in treating nine parathyroid adenoma cases were 100% (9 out of 9) technical success, 55.6% (5 of 9) biochemical remission, and that no complication was appeared (2). Khandelwal et al. showed that the clinical outcome of RFA in treating 10 parathyroid adenoma cases was 100% (10 of 10) technical success and 100% (10 of 10) biochemical remission for a short-term follow-up, and that the complication rate was 10% (1 of 10) with voice change. The complication was spontaneously resolved within three weeks (11). Previous studies, however, had some limitations, including small sample sizes (< 30 cases) and short-term follow-up periods (< 1 year). To validate the clinical outcome of RFA in treating PHPT, multicenter studies with larger population and more extended follow-up period are recommended.

In conclusion, the combination therapy of EA and subsequent RFA can be an alternative to treat PHPT for patients ineligible for parathyroidectomy, if EA is not sufficiently effective to achieve clinical success.

Copyright © 2022, Author(s). This is an open-access article distributed under the terms of the Creative Commons Attribution-NonCommercial 4.0 International License (http://creativecommons.org/licenses/by-nc/4.0/) which permits copy and redistribute the material just in noncommercial usages, provided the original work is properly cited.
download pdf 3.14 MB Get Permission (article level) Import into EndNote Import into BibTex
Number of Comments: 0