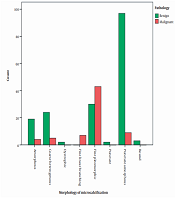 Successful Stereotactic-Guided Vacuum-Assisted Biopsy in the Evaluation of Breast Microcalcifications: A Study in a Single Tertiary Referral Center in the Middle East

Breast microcalcifications are a category of lesions that can lead to malignancies. They remain a major concern in imaging of suspected cases. Vacuum-assisted biopsy (VAB) has been proposed as a safe and effective measure to evaluate microcalcifications.

The present study aimed to assess the results of VAB for breast microcalcifications.
<b>Patients and Methods</b>:
This cross-sectional study was conducted on patients with microcalcifications detected on mammograms. Patients were recruited through simple random sampling during 2019 - 2020, based on the inclusion criteria. The inclusion criteria were microcalcifications on mammography, classified as the breast imaging-reporting and data system (BI-RADS) categories 3, 4B, 4C, and 5, and undergoing mammography-guided VAB for the microcalcifications. Patients with missing data and those who could not be followed-up for at least six months were excluded from the study. They were assessed regarding different imaging characteristics of lesions, including the breast density, BI-RADS classification, microcalcification distribution and morphology, and other demographic and clinical features before biopsy. Additionally, the results of stereotactic-guided VAB were assessed for various benign and malignant pathologies of microcalcifications. The results of descriptive and analytical tests for various radiological and pathological features of lesions were reported.

A total of 257 patients, with a mean age of 50.3 ± 8.3 yars, were included in this study. Almost half of the patients (n = 125, 48.6%) had a C-grade breast composition. Regarding the BI-RADS classification, 206 (80.2%) patients were diagnosed with 4B lesions, followed by 44 (17.1%) patients with 4C lesions. The assessment of the pattern of microcalcification distribution in imaging showed that more than half of the patients (n = 148, 57.6%) had lesions in multiple groups. The most prevalent morphology of microcalcifications was punctate amorphous (n = 109, 42.4%). The majority of patients (n = 180, 70%) had benign findings in the pathological assessment, and only 69 (26.8%) had malignant features in pathology. The distribution of malignancies differed among various BI-RADS categories. In the 4B category of lesions, there were 166 benign lesions versus 32 malignant lesions, while in the 4C category, there were 10 benign lesions versus 34 malignant lesions (P < 0.001).

Breast cancer (BC) is the leading cause of cancer-related death in females, with increasing trends of incidence and mortality in the past decades (1). Appropriate screening programs are necessary to diagnose and treat suspected cases of BC effectively and to increase their survival and reduce costs. Imaging modalities, mainly mammography, are the core of BC screening programs. Screening approaches vary significantly based on the population and individual characteristics. Nevertheless, most of these programs suggest annual screening in middle age for women with an average risk of BC to protect them against this malignancy (2).

Although there are questions regarding the effectiveness of mammography as the main tool for BC screening, it remains the most accessible and commonly applied screening tool for this lethal cancer (3, 4). Evidence suggests that different clinical and radiological findings of benign and malignant breast abnormalities have significant associations (5). One of the most common findings of mammography is microcalcification, which refers to small calcium deposits within the breast parenchyma. The presence of these microcalcifications has been shown to have many significant associations with the pathophysiology and clinical features of BC (6).

Recent studies suggest that microcalcifications lead to BC and result in the progression of macrophage-mediated epithelial-mesenchymal transition (6). Besides, research shows that breast microcalcifications are independent risk factors for BC, which are more prominent in premenopausal women compared to their postmenopausal counterparts (7). In a more in-depth investigation, different morphologies of BC lesions were found to be amorphous, coarse heterogeneous, and fine pleomorphic microcalcifications. Overall, each morphology represents a specific behavior and distribution pattern of a lesion (8). Therefore, appropriate management of these lesions is necessary to prevent the adverse effects of BC.

So far, studies on interventional breast biopsy for the detection of benign and malignant lesions have mainly involved CNB, and the findings are limited to VAB in patients with BC in Iran (12, 13). Therefore, further investigations are needed to determine the efficacy of VAB in the management of patients with breast microcalcifications.

This study aimed to describe our experience of the pathological evaluation of stereotactic-guided VAB for breast microcalcifications in a large referral center to determine BC management methods in low- and middle-income countries with limited resources to manage this malignancy.

All patients were completely assessed before undergoing biopsy, and the microcalcification type and distribution pattern were determined. Patients with atypical or benign patterns of microcalcification in the baseline mammography were re-evaluated after six months via control mammography to examine the progression of lesions. One expert radiologist with 15 years of experience examined the images; it should be noted that this study was a blinded experiment.

To conduct stereotactic VAB, after lesion localization via mammography, the scout view and two images with 15-degree deviations to the right and left, respectively were acquired in this study. After detection of microcalcifications on the mammograms, the coordinates of the lesion were entered in the stereotactic device. Following the lesion biopsy, if adequate drainage of the lesion was achieved, a marker would be left at the site of biopsy. The Hologic Multicare Platinum Prone Breast Biopsy table and a Barco 5 MegaPixelWorkstation (SVDx-400) were used to conduct VAB. Besides, an ATEC SapphireTM (9-G) needle was used for VAB.

The VAB samples were placed in 10% buffered formalin for a minimum of six hours for fixation. Next, they were processed, and paraffin-embedded blocks were prepared. Hematoxylin and eosin (H&E)-stained slides were evaluated by a pathologist for diagnosis. Also, in some cases, for a definite diagnosis, immunohistochemistry (IHC) staining was carried out.

The patients’ age and history of personal and family cancer were recorded as important demographic and clinical data. The variables under study included the pattern, morphology, and distribution of microcalcifications, mammographic breast density and composition, BI-RADS category of the lesion, detection of malignancy on VAB, and other associated breast lesions. Besides, microcalcification alterations in patients with atypical or benign lesions at baseline, who underwent control mammography after six months, were examined to detect suspicious lesions and malignancies.

Quantitative variables are reported as mean and standard deviation (SD), and qualitative variables are described as frequency and percentage in this study. Chi-square (for a qualitative cross-tabulation analysis) and independent samples t-test (for the analysis of qualitative and quantitative variables) were used to investigate the association of different variables. A P-value less than 0.05 was considered statistically significant. Fisher’s exact test was also used as a statistical significance test in the analysis of contingency tables with a small sample size, leading to small expected values in the tables. All statistical analyses were conducted in SPSS for Windows version 16 (released in 2007, SPSS Inc., Chicago, IL, USA).

This study was granted approval by the institutional review board of Tehran University of Medical Sciences. All the patients provided an informed consent form before participation in this study and also agreed with the publication of data without any personal identification information.

A total of 257 patients, with a mean age of 50.3 ± 8.3 years (range: 31 - 76 years), were included in this study. The majority of patients reported no family history of BC (n = 135, 52.5%), and only 36 (14%) patients had a positive family history of this cancer; the largest proportion of the participants (n = 18, 7% total) had a history of BC in first-degree relatives. Only 27 (10.5%) patients had a personal history of BC. Overall, 11 patients had atypical findings and were followed-up for six months; two of these patients underwent surgery, and a diagnosis of ductal carcinoma in situ (DCIS) was made based on the pathology reports. The remaining nine patients had stable lesions in the radiological evaluation during the follow-up.

Table 1. The General Demographic and Radiological Characteristics of the Patients

The assessment of two lesion samples is presented in Figures 1 and 2. Except for eight patients (3.1%) with missing data in pathology, the majority of patients (n = 180, 70%) had benign findings in the pathological evaluation, and only 69 (26.8%) cases showed malignant features on pathology. Among benign lesions, fibrocystic change (n = 67, 26.1%), hyperplasia (n = 35, 13.6%), and stromal fibrosis (n = 29, 11.3%) were the most common diagnoses. Also, DCIS was the most commonly diagnosed pathology among malignant cases (Table 2).

A sample of detected microcalcifications in a patient with benign lesions. Lesions can be seen on the mammogram in the mediolateral oblique (MLO) view (A) and magnification (B) view. In the pathological examination, a coarse heterogeneous microcalcification is associated with mild usual ductal hyperplasia (C) and a fibrotic background in the dilated ducts (D). 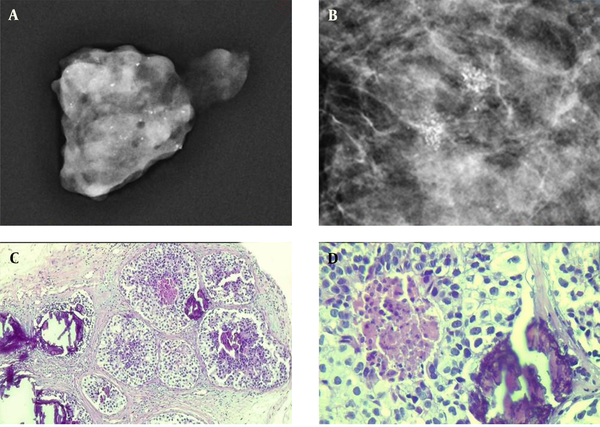 Table 2. The Results of the Pathological Evaluation of Vacuum-Assisted Biopsies (VABs)

According to the radiological investigation of the morphological patterns of microcalcifications in patients with benign and malignant pathology results, the frequencies of amorphous, coarse heterogeneous, and punctate amorphous morphologies were substantially higher in benign cases. Moreover, the difference between different pathology types was significant (P < 0.001) (Figure 3). 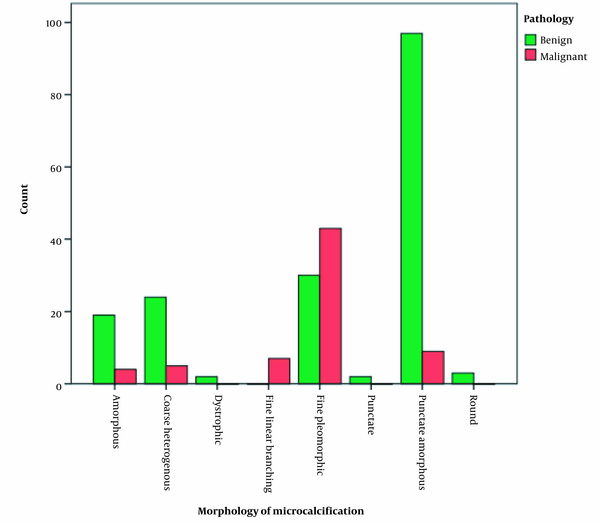 Other variables were also investigated in this study. Age was not significantly different between benign and malignant microcalcification groups (P = 0.552). Also, a family or personal history of BC was not a significant predictor of malignancy in the detected microcalcifications (P = 0.555 and 0.929, respectively). The breast composition did not differ significantly regarding malignancy detection between patients with benign and malignant lesions (P = 0.902). Besides, the presence of a concurrent mass was not significantly associated with malignancy (P = 0.239). Conversely, the distribution of malignancy was significantly different between 4B and 4C lesions (166 benign vs. 32 malignant 4B lesions; 10 benign vs. 34 malignant 4C lesions) (P < 0.001) (Figure 4). 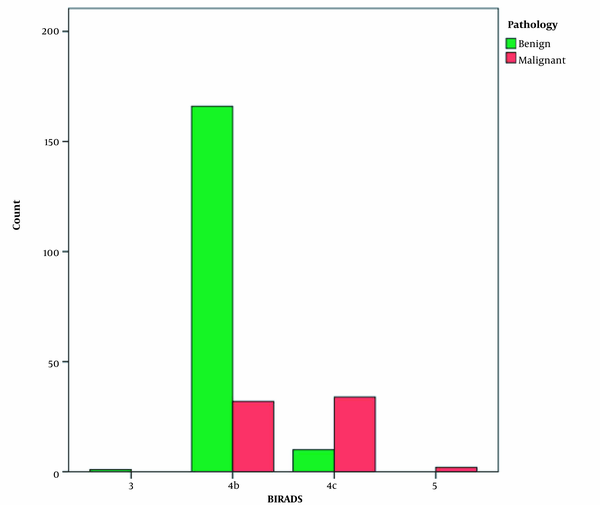 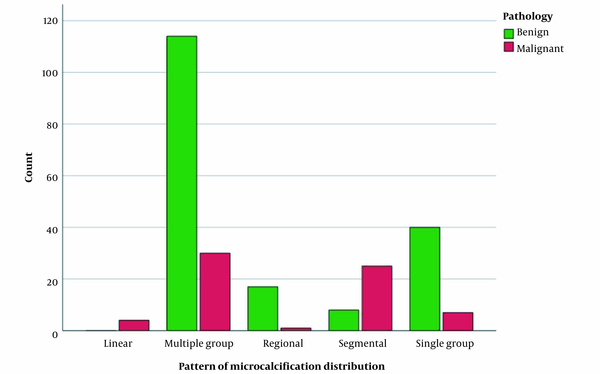 The main findings of this study were the benign histology of the majority of pathologically evaluated VABs, fibrocystic change as the main microscopic diagnosis, and DCIS as the most common diagnosis among malignant pathologies. The prevalence of the amorphous pattern of microcalcification, as the most common pattern in mammograms, was significantly higher among patients with benign lesions based on VAB. The BI-RADS scoring system was a significant predictor of malignancy, with higher BI-RADS categories indicating more malignant lesions in the microscopic evaluation. Differences in the distribution of microcalcifications were related to malignancy diagnosis, and they were found to be significant.

Regarding the BI-RADS scoring of mammograms in the present study and its association with malignancy detection in the microscopic evaluation, it was found that higher BI-RADS categories were significantly associated with more malignant pathological findings as compared to lower BI-RADS categories. This finding is highly consistent with the results of multiple previous studies on the association of malignant changes in the detected breast microcalcifications and the higher BI-RADS categories (5, 15, 18, 19). These findings confirm the advantageous use of this scoring system for microcalcifications evaluated by VAB and suggest further expansion of this system for various benign, suspicious, and malignant breast lesions (8, 15).

This study had some limitations. The small sample size and short follow-up period were the main limitations of the present study. Future research is suggested to include a larger sample size and include more diverse patterns and pathologies of breast microcalcifications. Besides, incorporating the role of hormonal factors, such as estrogen and progesterone receptors in the pathology of BC, is highly recommended to investigate the nature of microcalcifications in the breast tissue.

In conclusion, this study described and analyzed successful stereotactic-guided VAB for breast microcalcifications and investigated the patterns and associations of these lesions with various demographic, clinical, and radiological findings based on mammography. VAB can be considered as a promising assessment tool for breast microcalcifications and may be implemented to prevent breast malignancies by promoting earlier detection, proper management, and effective treatment.

The authors would like to thank all the people who contributed to this study.

Copyright © 2022, Author(s). This is an open-access article distributed under the terms of the Creative Commons Attribution-NonCommercial 4.0 International License (http://creativecommons.org/licenses/by-nc/4.0/) which permits copy and redistribute the material just in noncommercial usages, provided the original work is properly cited.
download pdf 6.91 MB Get Permission (article level) Import into EndNote Import into BibTex
Number of Comments: 0