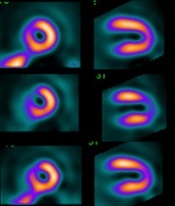 This study was conducted on 29 consecutive patients with AMI (23 males and 6 females; mean age, 71 ± 8.4 years), who underwent MP-SPECT using a standard two-day rest/stress protocol. The rest 99mTc-MIBI MP-SPECT images were acquired in the early phase at one hour after the injection of 99mTc-MIBI and in the delayed phase at three hours after the early phase. The total perfusion deficit (TPD) score for SPECT was measured to compare the defect area between the rest-early phase, rest-delayed phase, and post-stress imaging conditions.

The combination of rest-early phase, delayed phase, and post-stress 99mTc-MIBI imaging using a two-day protocol after AMI reperfusion was a clinically useful method, which could identify residual ischemia and predict the left ventricular function improvement in the chronic phase of disease while reducing the exposure dose.

The prognosis of acute myocardial infarction (AMI) mainly depends on the left ventricular (LV) function, infarct size, and the extent of myocardial ischemia in infarcted and non-infarcted areas. It is generally important to investigate the effects of treatment on AMI (1). Previously, dual single photon emission computed tomography (SPECT) using 201TlCl (Tl) and 99mTc-pyrophosphate (PYP) tracers was performed to determine the effects of acute treatment on AMI. 99mTc-PYP, which depicts a necrotic myocardium, can quantify an infarcted myocardium. This agent, by capturing the overlap region between 201Tl and 99mTc-PYP on dual SPECT, can identify necrotic tissues in a re-inflated myocardium in the acute phase, and its usefulness has been reported in the literature (2, 3). Moreover, previous research has investigated the mismatch of 201Tl and 123I-β-methyl-p-iodophenyl-pentadecanoic acid (BMIPP) dual SPECT (4). A mismatch defect between 201Tl and 123I-BMIPP dual SPECT has been reported following AMI reperfusion in patients with a blood flow deficit and a fatty acid metabolism disorder, with the cardiac function expected to recover in the mismatched area (4, 5). However, 99mTc-PYP and 123I-BMIPP dual SPECT uses 201Tl and requires the simultaneous administration of two nuclides, resulting in a high exposure dose.

In recent years, 99mTc-sestamibi (MIBI) washout has been associated with myocardial mitochondrial damage in patients with AMI after a successful percutaneous coronary intervention (PCI); it may also predict the functional improvement of LV during follow-ups (6-8). Overall, the myocardial uptake of MIBI depends on a large negative charge in mitochondrial membranes (9); this observation is associated with mitochondrial dysfunction and LV dysfunction in the myocardium (6-8). 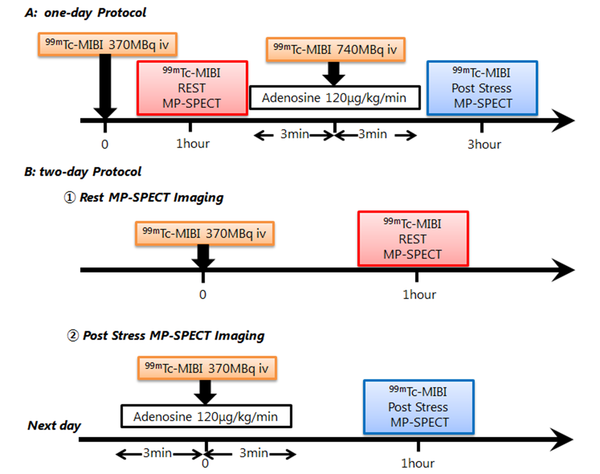 Standard rest-stress 99mTc-sestamibi (MIBI) myocardial perfusion-single photon emission computed tomography (MP-SPECT) protocols. Rest-stress MP imaging with 99mTc-MIBI can be performed based on either a one-day protocol (A) or a two-day protocol (B). In the rest-stress one-day protocol, the dose of stress imaging should be higher than that of rest imaging.

A total of 29 consecutive patients with AMI (23 males and 6 females), with a mean age of 71 ± 8.4 years, were evaluated in this study. All the patients were admitted within six hours after the onset of symptoms and successfully received direct PCI. On the other hand, patients with myocardial infarction associated with another culprit branch of coronary arteries in ≤ 1 month of PCI treatment were excluded from the study. Angioplasty was considered technically successful when residual stenosis of < 50% and Thrombolysis in Myocardial Infarction (TIMI) grade 2 or 3 on angiography (12) were observed at the end of angioplasty. All patients underwent 99mTc-MIBI MP-SPECT based on a standard two-day rest-stress protocol (Figure 1B). The rest MP-SPECT imaging with 99mTc-MIBI was performed in ≤1 week after PCI, whereas stress 99mTc-MIBI MP-SPECT was performed in ≤ 10 days after rest MP-SPECT (Figure 2). 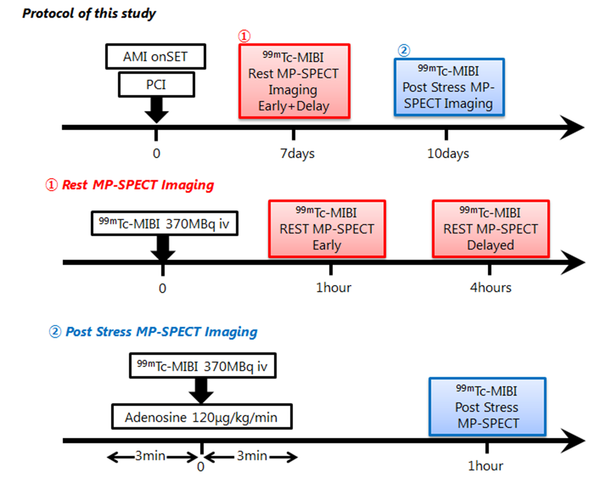 The Institutional Review Board of Gifu Prefectural General Medical Center (Gifu, Japan) approved this study. This study was performed according to the ethical standards of the 1964 Declaration of Helsinki. The requirement to obtain informed consent was waived because of the retrospective design of the study.

Following the 99mTc-MIBI injection, 99mTc-MIBI MP-SPECT imaging was performed after the patient had eaten to accelerate the excretion of isotopes through the gallbladder into the bowel. The 99mTc-MIBI MP-SPECT imaging was performed on a BrightView X SPECT system (Philips Healthcare, Eindhoven, Netherlands), equipped with a cardiac high-resolution collimator. A total of 36 images were acquired at 60 seconds per frame (matrix, 64 × 64; magnification, 1.46) under stress and rest conditions, using the “step-and-shoot” technique (90°/head). Images were acquired along an auto-proximity circular orbit in a range of 180° (from 45° right anterior oblique to 45° left posterior oblique). Energy discrimination was provided by a 20% window, centered over the 140-keV photon peak of 99mTc.

Additionally, transverse images were reconstructed using a filtered back projection with a Butterworth pre-filter (order, 8; cutoff frequency, 0.6 cycle/pixel) and a ramp post-filter for processing without attenuation correction. The transaxial images were then reformatted along the short axis, vertical long axis, and horizontal long axis of the LV.

The total perfusion deficit (TPD), proposed by Slomka et al. (14) as an objective parameter, was automatically calculated using the QPS quantitative perfusion SPECT software (Cedars-Sinai Medical Center, Los Angeles, CA, USA) (15) to represent both the defect severity and the defect extent. The TPD scores of SPECT were calculated as the percentage of the total surface area of LV below the predefined uniform average deviation threshold. A normal database, developed by the Japanese Society of Nuclear Medicine, was used for TPD scoring (16). This database is based on exercise-rest myocardial perfusion images, acquired from 80 Japanese individuals with a low likelihood of cardiac disease.

A total of 29 consecutive patients with AMI (23 men and 6 women; mean age, 71 ± 8.4 years), who underwent successful PCI on admission, were examined in this study. A general summary of the total population characterlike is shown in Table 1.

Table 1. Baseline Characteristics of the Patient Population a

a Data are expressed as No. (%) or mean ± SD, unless otherwise indicated. 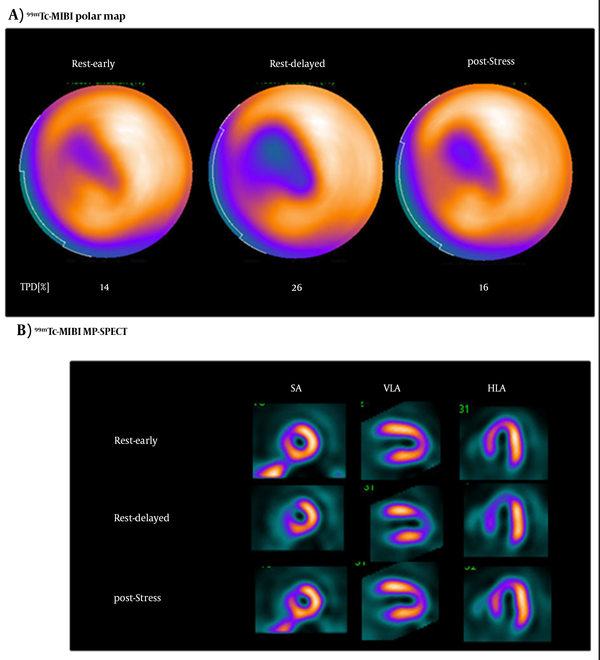 Table 2. Individual Characteristics of the Population a

The results of the present study showed that the TPD score of post-stress SPECT was significantly lower than that of rest-delayed phase SPECT. The significantly smaller ischemic area relative to the 99mTc-MIBI washout area was the main finding of this study. TPD, which represents both the extent and severity of defect/abnormality on MP-SPECT images, was used to investigate the defect size. Previous studies on 99mTc-MIBI washout have mostly employed visual segmental scoring systems to calculate the defect score, including the total stress and rest scores (6). However, these systems are semi-quantitative and require special skills or imaging interpretation knowledge, which can be only gained through training and experience. Alternatively, Yoda et al. (17) reported that TPD, automatically calculated by the QPS software (Cedars-Sinai Medical Center, USA) (15) on a normal Japanese database, is an objective quantitative index with high reproducibility, which is comparable to conventional visual segmental assessments by experienced interpreters; therefore, the TPD of SPECT was used in this study.

The results of the present study did not show a significant close relationship between the TPD scores of post-stress and rest-early phase SPECT, indicating that all patients enrolled in this study underwent a successful PCI for AMI. Therefore, no residual ischemic area was detected in most patients, and the infarction area was only observed in few patients. Generally, the defect area size on rest-delayed phase images is related to tissue salvage and is a predictor of late functional recovery (6, 18). The main finding of the present study is that the defect area was significantly larger under rest-delayed phase conditions compared to the post-stress condition. Early interventions to protect the mitochondrial function may be also important for myocyte protection (19, 20). Also, accurate detection of mitochondrial dysfunction in patients with AMI can be considered useful (6).

The adenosine triphosphate (ATP) level in the myocardium with a blood flow-blocked AMI significantly decreased, as oxygen is required to produce ATP in the myocardium (21-24). Another study reported that the ATP concentration in cardiomyocytes depends on the extent and duration of damage to cardiac function (25). Besides, Torrealba et al. found that when the oxygen supply decreased due to reduced myocardial blood flow, the mitochondrial membrane potential became abnormal, the ability to retain 99mTc-MIBI decreased, and the 99mTc-MIBI washout rate increased (20, 26). The residual ischemic region indicated by post-stress imaging represented a myocardial tissue, with increased mitochondrial damage due to a lack of oxygen. Consequently, the ability of myocardial tissue to retain 99mTc-MIBI was lost. Moreover, the 99mTc-MIBI washout region, identified by rest-delayed phase imaging, represented a myocardial tissue with normal oxygen supply through successful PCI reperfusion (20, 26); however, mitochondrial damage caused by AMI remained unchanged, and 99mTc-MIBI was retained. The TPD scores of post-stress and rest-delayed phase SPECT were significantly different considering the difference between the degree of myocardial perfusion injury and the level of mitochondrial damage (Figure 4). The TPD score of delayed-phase SPECT was significantly higher, suggesting that delayed-phase imaging could sensitively detect mitochondrial damage. 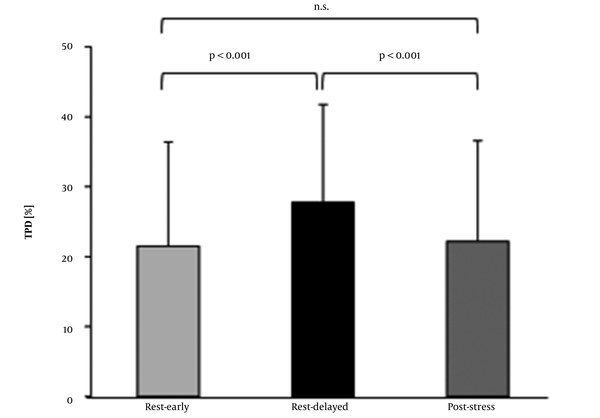 Investigation of treatment effects on AMI is important for predicting the AMI prognosis. The myocardium with 99mTc-MIBI washout in rest-early phase and delayed phase 99mTc-MIBI MP-SPECT can be identified as the myocardium which is exposed to ischemia, but is expected to recover (6-8, 18). The current study showed that the extent of washed-out myocardium did not match the residual ischemic myocardial area and that the washout area was significantly larger than the residual ischemic area. Therefore, ischemia assessment using rest-stress 99mTc-MIBI MP-SPECT imaging alone insufficiently evaluates the recovery of cardiac function after revascularization. Besides, rest-early phase and delayed phase 99mTc-MIBI MP-SPECT imaging, which provides information on intramyocardial mitochondrial damage, is also necessary.

This study had some limitations. First, the acquisition interval of rest-early phase images and rest-delayed phase images was three hours. This could be influential through not only changes in the defective area due to 99mTc-MIBI washout, but also the effects of count decrease considering the decay time of 99mTc. Second, since the sample size was small, the reliability of statistical analysis may be insufficient.

Copyright © 2022, Author(s). This is an open-access article distributed under the terms of the Creative Commons Attribution-NonCommercial 4.0 International License (http://creativecommons.org/licenses/by-nc/4.0/) which permits copy and redistribute the material just in noncommercial usages, provided the original work is properly cited.
download pdf 4.16 MB Get Permission (article level) Import into EndNote Import into BibTex
Number of Comments: 0