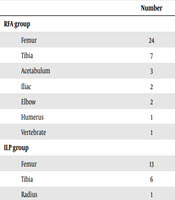 We aimed to assess the safety and outcomes of RFL and ILP in patients with OO as well as compare the efficacy of these two procedures.

Medical records of 60 OO patients were retrospectively reviewed. Patients were divided into two groups, of which 40 underwent RFA procedures and 20 went through ILP. All patients were followed up clinically either through telephone interview or outpatient clinic visit and imaging was conducted in case signs and symptoms recurred.

Similar to previous published studies, this study showed high success rates for both RFA and ILA. Total pain relief occurred in 96.6% of the patients.

Osteoid osteomas (OO) are the third most common benign bone tumors affecting mostly children and adolescents with more tendency toward males (1). Lower extremities, in particular femoral and tibia bones are the main area of involvement (1). OO is described by a characteristic pain that is intensified at nights and ascribed to the high level of prostaglandin formation in the affected area, leading to vasodilation and vascular proliferation which cause stimulation of peripheral nerve fibers. Therefore, non-steroidal anti-inflammatory drugs (NSAIDS) dramatically alleviate the pain (2). Other presenting signs that commensurate to the site of lesions include tenderness, swelling, limp, scoliosis, and bone deformity.

Main imaging modalities including plain radiographs, computed tomography (CT) scan, magnetic resonance imaging (MRI), and whole body bone scan (WBBS) along with clinical findings lead to the accurate diagnosis in most cases. The most common feature of OO is a small, well-delineated, low-attenuation nidus surrounded by a dense sclerotic reaction (3). Treatment options include medical therapy, surgical removal, and minimal invasive procedures such as CT or MRI-guided core drill excision, and percutaneous thermal ablation (PTA). Taking into consideration that conservative approaches take 6 to 15 years for symptom resolution as well as adverse effects of long term use of NSAIDS, surgical excision is the treatment of choice (4). Significant PTA procedures that refer to radio-frequency ablation (RFA) and interstitial laser photocoagulation (ILP) have also been recently applied with high success rates (5-10).

The goal was to assess the safety and outcomes of RFL and ILP in patients with OO as well as compare the efficacy of these two procedures.

Medical records of OO patients were retrospectively reviewed. Diagnosis of OO was made based on clinical and imaging features. The patients were referred by orthopedic surgeons from the hospital clinic. Imaging methods used for diagnosis were plain radiography, CT scans and radio isotope bone scans. Written informed consent was obtained from all patients or their parents after detailed explanation of the procedure and the Ethics Committee of the University Research Deputy approved the study. All patients were followed up clinically either through outpatient clinic visit or telephone interview and imaging was conducted in case of reappearance of signs and symptoms of OO.

Our institutional review board approved this study. Informed consent was applied from the patients or their parents. One experienced interventional radiologist performed all RFA procedures in our university affiliated hospital on an inpatient basis.

All RFA procedures were done under general anesthesia and fluoroscopic CT guidance (Somatom, Siemens, Germany) with a thickness of 1 - 5 mm to localize the lesions. After prep and drep, under CT guidance we adjusted the position of the patient’s lesion and access into the nidus was made by a coaxial bone biopsy system. The tumor was ablated using a temperature of 60°C - 90°C for 3 - 7 min by 3 - 20 W power.

Postprocedural CT was done to rule out soft tissue swelling and hematoma. Patients were advised to avoid vigorous exercise and sports for 6 weeks.

All procedures were carried out under general anesthesia. Under CT scan (Siemens, Germany) we localized the lesion and the dimensions of the nidus were measured.

We used Nd-YAG laser equipment with two watts power. An eight hundred micron fiber was inserted through the needle and the needle was withdrawn about 5mm to let the bare tip of the needle to remain within the tumor. Fiber precharing was done clinically by firing of fiber in a few milliliter of patient’s blood immediately before initiating the procedure.

Sixty patients were included in this study. Characteristics of the patients are summarized in Table 1. Location of the lesions is shown in Table 2.

Table 2. Distribution of OO Lesions Based on the Anatomic Location

Forty patients underwent RFA. Patients were followed up from 4.5 to 16 months (mean = 10 and SD = 3.99). Forty one RFAs were performed. Pain relief was documented within 1 - 7 days in 35 and 1 - 3 months in five of the patients. The technical success rate was 100%. Recurrence of tumor occurred in four patients. Of these, one patient was successfully treated with the second RFA and open surgical excision was performed in two cases. Two fractures also occurred in two cases in the right iliac and left humorous bones that were both managed by nonsurgical methods. Therefore, the primary and secondary clinical effectiveness was 90.00% and 92.50%, respectively. The procedure was not complete in one patient who had OO of the pedicle of the fifth thoracic vertebrate to prevent spinal injury.

In comparison between the outcomes of RFA and ILP, no statistically significant difference was seen (P value > 0.05). In addition, as we mentioned, except for two cases of fractures, no other major complications happened in the two groups.

Osteoid osteoma (OO) is a small, benign bone tumor that causes typical pain that often gets worse at night and is relieved by NSAIDs (1). OO has a distinctive feature that makes its diagnosis straightforward and is mainly diagnosed based on the presenting signs and symptoms and radiological findings. Characteristic radiographic findings include a nidus of vascular osteoid tissue in the bone cortex surrounded by reactive sclerotic bone (3). However, there may be lesions that mimic the imaging features of OO including Brodie abscess of chronic osteomyelitis with a radiolucent center and surrounding reactive sclerosis, chondroblastomas that occur in the epiphyses of children, osteoblastoma, stress fracture, osteomyelitis, eosinophilic granuloma, bone cyst, avulsion fracture, chondroblastoma, and intracortical hemangioma (11, 12). CT is the modality of choice for diagnosis of this tumor and provides the characterization of the nidus and the surrounding sclerotic bone. In addition, MRI and radionuclide scintigraphy are useful for detecting lesions (11, 13-15).

Surgical excision of the nidus is the treatment of choice; however, it has disadvantages such as difficulty locating the lesion intraoperatively, prolonged period of hospitalization and restricted activities, and postoperative complications (16, 17). Moreover, the location of some lesions may prevent surgical excision because of possible adjacent structure damage. Articular and epiphyseal lesion excision requires arthrotomy impairing bone growth and joint mobility.

In this cohort of patients, no histological confirmation was required since a dynamic-contrast CT was obtained in all patients.

In this study we evaluated the safety and efficacy of PTA procedures including RFA and ILP. Our data showed high success rates for both RFA and interstitial laser ablation (ILA) similar to previous published studies. Total pain relief occurred in 96.6% of the patients. As we mentioned, our major complication was fracture that occurred in two patients. In other studies, fracture has been rare and it has been reported as case report (19). Comparison of the two methods has shown similar results in previous studies. For example, in a clinical study conducted by Gebauer et al. (20) on thermal ablation of OO using laser interstitial thermal therapy on 12 patients and RFA in eight patients, pain relief ocurred in all patients after the first ablation. Recurrence occurred in three patients after 3, 9, and 10 months that was successfully re-treated. No major complications were reported. It was concluded that thermal ablation is a safe method for OO. In addition, they reached the conclusion that there is no difference in the clinical outcome between the two methods (20). It has been mentioned that RFA and open surgery have similar treatment outcomes; however, RFA is preferred as it has a shorter hospital stay and recovery period (21). Some studies have reported a clinical efficacy of 100% for RFA (21). An advantage of RFA under the guidance of CT is the rapid frame rate and highly resolved visualization of bony structures. These characteristics allow the interventionist to perform the procedure in a real-time manner (22). Comparing the cost of the two methods, as we mentioned, laser ablation device is more expensive, but performing each procedure by RFA needs a more expensive probe compared to laser ablation. Average total costs per patient is higher in RFA compared to laser ablation (about 20% higher in RFA compared to laser) (22). Needle navigation could be performed by ultrasongraphy, CT, fluoroscopy and MRI. As OO is not very detectable in ultrasonography, it is not the method of choice. CT fluroscopy guidance is better due to its real time control possibility (21).

In conclusion, similar to previous published studies, this study showed high success rates for both RFA and ILA.