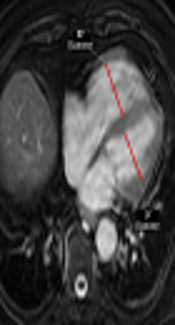 Increased right ventricle-to-left ventricle (RV/LV) ratio on computed tomography pulmonary angiography (CTPA) has been reported as a poor prognostic indicator in patients with acute pulmonary embolism (PE). It has also been reported that pulmonary vein sign (PVS) on CTPA is a rare finding of PE.

To evaluate PVS on CTPA and unenhanced magnetic resonance imaging (MRI) in patients with PE suspicion. We also aimed to investigate the relationship between the severity of PE and presence of PVS, RV/LV ratio and combination of these two on unenhanced MRI.

One-hundred-twelve patients with PE suspicion who underwent CTPA and unenhanced-MRI [steady state free precession (SSFP)] within the first 48-hours constituted the study group. All CTPA images were evaluated for the presence, location and severity of PE by observer-1. Two observers (observer-2 and 3), independently evaluated unenhanced-MR images for the presence of PVS without knowing the results of CTPA. Then, these 2 observers reviewed the CTPA and MRI images together with observer-4 to reach the final consensus for the presence of PVS and measurement of RV/LV ratio. Cohen’s Kappa analysis was used to assess the agreement between observers. Relationship between the mean PE index and imaging findings (PVS, RV/LV) were calculated.

PVS on CTPA or unenhanced MRI can be used as a sign of severe PE and it may also be an indicator of right heart dysfunction.

Pulmonary embolism (PE) is a widespread and serious health problem with high mortality rates. It usually results from thrombosis of the deep veins in lower extremities (1). Computed tomography pulmonary angiography (CTPA) is used as a preferred imaging tool in the diagnosis of PE (2-4). Magnetic resonance imaging (MRI) has become a feasible imaging method with the recent developments in gradient technology, multichannel coils, and parallel imaging techniques, which make it possible to obtain fast acquisition sequences with high temporal resolution. Unenhanced MRI sequences or contrast-enhanced magnetic resonance pulmonary angiography (MRPA) are particularly useful in patients with clinical suspicion for pulmonary embolism who have contraindications for CTPA scanning (i.e. pregnancy, allergy to iodine-containing contrast medium), or in patients for whom ionizing radiation exposure is a major concern (5-8).

Herein, we aimed to prospectively evaluate PVS on CTPA and unenhanced MRI in patients with PE suspicion. We also aimed to investigate the relationship between the severity of PE and presence of PVS, RV/LV ratio and combination of these two on unenhanced MRI.

This prospective cross-sectional study has begun after ethics committee of Pamukkale University Faculty of Medicine, Denizli, Turkey approved our letter of application (reference number: 60116787-020/85545). Informed consent was taken from the patients who agreed to participate in the study.

This prospective HIPAA-compliant study was conducted at a tertiary hospital (Pamukkale University Medical Center) and informed consents were obtained from all patients before the study. The study population was recruited from 635 patients who had undergone CTPA for suspected acute pulmonary embolism between October 2017 and September 2018. Patients who agreed to undergo unenhanced MRI after CTPA were included. Patients with fibrotic lung disease, congestive heart failure and contraindications for MRI, those who were uncooperative, younger than 18 years, pregnant, and those with a duration of > 48 hours between CTPA and MRI, and those with a history of cardiopulmonary surgery, radiotherapy or cardiac ablation therapy were excluded. Briefly, in this cross-sectional study, all patients who met the inclusion criteria and accepted to participate in the study between October 2017 and September 2018 were evaluated.

All magnetic resonance (MR) images were obtained using annually calibrated 1.5 Tesla superconductive magnet (GE Signa Excite HD, GE Medical Systems) and 8-channel phased-array torso coil positioned over the anterior and posterior chest. The maximum gradient strength was 33 mT/m and slew rate was 120 mT/m/s. The FOV was set to 40 × 32 cm to include the area between the thoracic inlet and the crura of the diaphragm while the patient was in supine position with arms along the sides. Fat-suppressed unenhanced steady state free precession (SSFP) MR images were obtained using “fast imaging employing steady-state acquisition (FIESTA)” during breath hold or free breathing according to clinical condition of the subjects. The MR imaging parameters were as follows: Time to repetition/time to echo (TR/TE), 4.2/1.8 msn; Flip angle, 70°; number of excitations (NEX), 2; matrix 288 × 160; and slice thickness/gap, 4/1.5 mm.

All CTPA images were evaluated for the presence of PE by a radiologist (observer 1) with 4-year experience in thoracic imaging. CTPA images were evaluated in mediastinal (WW: 350, WL: 50) window settings. The evaluation was mainly performed using the transverse sections, but the reader was free to change the window settings and perform multiplanar reconstruction (MPR) and maximum intensity projection (MIP) if needed. The presence and location of PE were recorded in the standard forms. To determine the severity of PE in each patient, we used a computed tomography (CT) index; (Σ (n × d)/40) × 100, which was described by Qanadli and colleagues (17). The “n” represented the number of affected segmental arteries (“n” of 20 segmental arteries) and “d” represented the weight coefficient of obstruction in affected arteries (d = 0 indicates no embolism, d = 1 indicates partial obstruction, d = 2 total obstruction). The diagnosis of PE was made according to the presence of a hypodense filling defect in the pulmonary artery, total luminal filling defect or partial filling defect with an acute angle at least in two consecutive sections in the pulmonary arteries on CTPA images (3).

The PVS was accepted as previously defined on CTPA (15), as the presence of a hypointense filling defect of > 2 cm in a PV on unenhanced MR images. Two observers with 3 (observer 2) and 7 years (observer 3) of experience independently evaluated unenhanced MR images for the presence of PVS without knowing the results of CTPA. After that, these two observers reviewed the images together with 18 years experienced third observer (observer 4) to reach the final consensus for the presence of PVS. For evaluation of right ventricular dysfunction, each ventricular diameter was measured by consensus of these three observers on the axial MR images where it was largest, as previously described (Figure 1) (14). The ratio of the right to left ventricle axial diameters (RV/LV) were calculated and RV/LV > 1 was accepted as right ventricular dysfunction. Then, all CTPA images were evaluated by these three observers for the presence of PVS by consensus. Data analysis was performed using SPSS software (SPSS Version 24, Chicago, IL, USA). Continuous variables (RV/LV ratio, PE obstruction index) were expressed as means and standard deviations (SD). Categorical variables (presence of PE, PVS and RV/LV > 1) were expressed as number and percentage. The Shapiro-Wilk and Kolmogorov-Smirnov tests were used to test the normality of the data distributions. If data were normally distributed with equal variance, Student’s t-test was used to evaluate the association between the mean PE index in patients with PVS, RV/LV > 1 and combination of these two; otherwise, the Mann-Whitney U-test was used. A p value of less than 0.05 was regarded as significant. Cohen’s Kappa analyses and values (κ) were used to assess the agreement between two observers and two imaging modalities. Kappa values (κ) was categorized as follows: κ = 0 - 0.20 poor; κ = 0.21 - 0.40 fair; κ = 0.41 - 0.60 moderate; κ = 0.61 - 0.80 good; and κ = 0.81 - 1.00 very good agreement (18). The correlations between PVS, RV/LV ratio or both and PE index were analyzed with Spearman’s correlation analyses.

Of the 635 patients who underwent CTPA for suspected PE, 127 agreed to participate in the study. However, 15 patients were excluded from the study due to: three had known fibrotic lung disease (one with usual interstitial pneumonia and two with idiopathic pulmonary fibrosis), three without MRI within 48 hours after CTPA, three with suspicious or contradictory medical history, two had known heart failure, two had cardiac ablation history, one was < 18-years-old, one had MRI incompatible metallic hip prosthesis. Fifty-three patients with positive PE on CTPA and 59 patients without embolism (50 male and 62 female; mean age, 54.7 ± 14.2 years; range, 23 - 83 years) were enrolled in the study (Table 1). The median MRI acquisition time was 6 minutes (range, 3 - 9 minutes; mean ± SD, 6 ± 1.6). The mean period between CTPA and MRI scans was 23.8 ± 19.1 hours.

aCorrelation is significant at 0.01 level.

bCorrelation is significant at 0.05 level.

Our results showed that presence of pulmonary vein sign (synonym with insufficient contrast medium filling in pulmonary veins) on CT or MRI is significantly correlated with PE severity index and patients with PVS had more severe PE than those without. Therefore, it can be used as a sign of severe PE on unenhanced MRI and PVS may also be an indicator of right heart dysfunction. Presence of both PVS and RV/LV ratio > 1 on MRI indicates more severe pulmonary embolism than absence of PVS or RV/LV ratio > 1. There was a very good agreement for the detection of PVS between two observers on unenhanced MRI.

Although PVS on MRI has not been investigated yet, some authors have described and studied pulmonary venous filling defects on CTPA (15, 16). Souza et al. (15) investigated the contribution of PVS to the diagnosis of PE and they found that the sensitivity, specificity, PPV and NPV of PVS on CTPA in the diagnosis of PE were 36.36%, 98.67%, 94.12%, and 72.55%, respectively. It is not very useful to use PVS as an adjunctive tool for the diagnosis of PE because it is a rare finding in patients with PE suspicion and can also be found in patients without PE. According to the findings of our study, we suggest using PVS on CTPA or MRI as an indicator of poor prognosis rather than using it as an adjunctive tool for the diagnosis. Although the agreement between CTPA and MRI is very good for detecting PVS, CTPA detected more PVS than MRI. As expected, this may be due to the high sensitivity of SSFP sequence to artifacts. Also, the use of larger slice thickness in MRI may have been another affective factor. As in that CTPA study (15), we found very good agreement between the two observers for the detection of PVS on unenhanced MRI.

There are weaknesses and limitations in this study. The small number of cases is the most important limitation and the findings of our study should be evaluated with more comprehensive studies. However, the strong point of this study is that it is the first study that investigated the PVS on both CTPA and unenhanced MRI that may be clinically important and correlate with PE severity. We have not used the respiratory or electrocardiogram (ECG) gating (that would have minimized the motion artifacts and potentially improve the diagnostic performance), which is another limitation of our study. However, in an emergency setting, the use of respiratory or ECG synchronizer and thinner sections would increase the imaging time and it is crucial to keep the imaging time as short as possible to decrease the motion artifacts in patients with poor medical state. The other limitation in our study was that the relationship between prognosis and PE severity index, PVS, RV/LV ratio was not investigated. However, many previous studies have shown that PVS, RV dilatation and high PE intensity index on CTPA are poor prognostic markers (14, 16, 21, 22). In addition, our samples were from one center. Therefore, our results need to be confirmed by studies conducted from other centers. Finally, MR images were obtained only in patients with acute thrombotic PE suspicion and we have used relatively thicker slices (slice thickness; 3 mm). Further MRI studies with thinner slices will be useful for investigating PVS in normal population and chronic thrombotic PE.