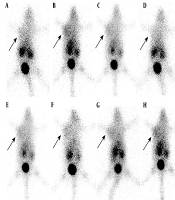 Hypoxia is an important cause of recurrence and metastasis of malignant tumors. Noninvasive detection of the extent of hypoxic areas of tumors is essential for delineation of radiotherapy target areas and dose.

To investigate the feasibility of 99Tcm-2-(2-methyl-5-nitro-1H-imidazol-1-yl) ethyl dihydrogen phosphate (99Tcm-MNLS) hypoxic imaging to monitor the tumor hypoxic state in tumor-bearing mice after radiotherapy.

Hypoxia is a ubiquitous phenomenon in most malignant tumors, which is the main reason for the tumors refractory and resistance to chemoradiotherapy (1, 2). Noninvasive detection of the extent of hypoxic areas of tumors is essential for delineation of radiotherapy target areas and dose. In the oxygen-enriched area, enough radiation doses could be given to kill malignant tumor cells. Then, oxygen-enriched cells experience an apoptotic die and hypoxic cells get enough oxygen and transform into oxygen-enriched cells, in which, enough doses could be given too. Therefore, monitoring the range and extent of hypoxic area can guide the radiation dose segmentation and the timing of radiotherapy. At present, there are many methods for the detection of tumor hypoxia, but most of them are invasive. Thus, their applications are restricted. Non-invasive detection of hypoxic areas has been improved continuously, and radionuclide hypoxic imaging is currently one of the most concerned detection methods of tumor hypoxia (3), which is beneficial to the diagnosis and treatment of tumor (4).

The aim of this study was to investigate the feasibility of 99Tcm-MNLS in monitoring the hypoxic status of tumor after radiotherapy and to confirm whether it could accurately reflect the tumor hypoxic status by immunohistochemical staining of hypoxia-inducible factor 1α (HIF-1α) in tumor cells.

A freshly rinsed 99Tcm liquid adjusted to 7.4 MBq/0.1mL with saline was added into a MNLS lyophilized product (Beijing Xinkesida Pharmaceutical Technology Co., Ltd., China), and then shaken manually and stood at room temperature for 10 minutes. Polyamide as the stationary phase and 10% hydrochloric acid solution as a developing solvent, the radiochemical purity of 99Tcm-MNLS kept at room temperature and 37°C for 30 minutes, 1, 2, 3, 4, 6 and 8 hours was determined.

Ninety Kunming mice (clean grade, half male and half female), aged 6 - 8 weeks old and weighing 20 - 25 g, were provided by the Experimental Center. 0.1 mL H22 hepatoma cells (provided by the Experiment Center) were subcutaneously inoculated in the right forelimb armpit of each mouse at a concentration of 2 × 108/mL. Then, the mice were fed in a clean environment for eight days. The size of the tumor was measured each day. The largest diameter of the tumor was about 1 cm at the last observing day. The tumor-bearing mice with well-growing, regular shape and almost similar size of tumors were selected for further experiments.

Forty-two tumor-bearing mice were equally divided into seven groups according to the imaging time after the injection by random number table: 30 minutes, 1 hour, 2 hours, 3 hours, 4 hours, 6 hours and 8 hours groups. Mice were treated with tail vein injection of 7.4 MBq/0.1 mL 99Tcm-MNLS and received single photon emission computed tomography (SPECT) (Millennium VG Hawkeye, GE Company, the United States) imaging at the corresponding time point of each group. The image acquisition parameters were set as: SPECT equipped with high resolution collimator with low energy, each frame image acquisition was 200 K and the matrix was 256 × 256 with 4 times magnification. The region of interest (ROI), such as the tumor site and the contralateral site, was sketched out on the images obtained from each group to get their respective radiocounting. The ratio of the radiocounting in tumor and non-tumor (T/NT) was calculated. Immediately after the imaging, the eyeballs of each tumor-bearing mouse were taken out for collecting blood and then the mouse was killed by dislocating the neck. Tissues such as tumor, heart, lung, liver, stomach and hind limb muscles were taken out for measuring the radiocounting per minute of each tissue using γ-counting instrument (ZD-6000 well type counting technetium analyzer, Xi’an Zhida Company, China) and the percent of injected dose per gram (% ID/g) of each tissue at each time point was calculated. The standard source of 99Tcm-MNLS was reserved.

Data were expressed as mean ± standard deviation (SD) and analyzed using statistical software SPSS version 17.0. The normality of data were assessed before analysis. If the data were normality, comparisons of measurement data were carried out using one-way ANOVA, pairwise comparison least significant difference (LSD) -t test, two independent sample t-test and non-parametric Spearman analysis. If not, the Rank sum test was used. The difference was statistically significant if P < 0.05 was considered.

4.2. 99Tcm-MNLS Imaging and Its Biological Distribution in Tumor-Bearing Mice

All tumor-bearing mice developed clear tumor images at the right forelimb armpit. The retention of imaging agents in tumors (T) and non-tumorous tissues (NT) was highest at 1 hour, and excreted with time, which was more significant in non-tumorous tissues, T/NT ratio was the highest and the imaging was the best at 2 hours after the injection of 99Tcm-MNLS. 4.5. Correlation Between 99Tcm-MNLS Hypoxia Imaging and the Expression of HIF-1α

In this study, the distribution of 99Tcm-MNLS in tumor-bearing mice showed that the uptake of 99Tcm-MNLS by the tumor was higher at early stage. Its distribution was mainly in the blood, liver and kidney but less in the brain, spleen, stomach and intestine. With extension of time, radioactivity was gradually increased in the tumor, while that in other organs (except kidneys and bladder) and tissues was gradually decreased. The T/NT ratio was increased gradually with time and reached the highest level at 2 hours. The reason may be that 99Tcm-MNLS is continuously diffused from the blood to the hypoxic area and absorbed by the hypoxic cells, and the background in blood is gradually cleared with time. In contrast, the low T/NT ratio in the tumor, kidney and bladder may result from the excretion 99Tcm-MNLS mainly by the kidneys and bladder.

99Tcm-MNLS hypoxia imaging showed that the tumor site could be visualized as early as within 30 minutes, and clearly at 2 hours with low background and high T/NT ratio. Then, the imaging of the tumor site and background were both reduced with time, so was the T/NT ratio. No obvious imaging was found in the abdomen of tumor-bearing mice except the kidneys, suggesting that 99Tcm-MNLS can display tumor lesions well and may have greater advantages on displaying the abdominal neoplasms than other hypoxia imaging agents (such as 99Tcm--HL91, which displays enriched radioactivity in all the abdomen). However, it needs more studies to confirm.

Different types of tumors have different sensitivity to radiotherapy. For instance, lymphomas and seminoma are sensitive to radiotherapy with significant effect, while melanoma and glioma are not sensitive to radiotherapy with poor curative effect. Nevertheless, most of the remaining malignant solid tumors have moderate sensitivity to radiotherapy and easily relapse and metastasize (9). Hypoxic cells in the tumors mainly contribute to this phenomenon because the percentage of hypoxic cells determines the sensitivity of the tumor to radiotherapy. The ionizing radiation of radiotherapy induces DNA to generate free radicals, combining with oxygen to form peroxides, which cause strand break of DNA and lipid peroxidation of the cell membrane, thereby leading to tumor cell death (10). Low oxygen content in hypoxic cells leads to insufficient combination with free radicals generated after radiotherapy to cause tumor cells death, thus, the dose of radiotherapy should be improved. Studies have shown that if the tumors are all hypoxic cells, the radiation dose should be three times of aerobic cells to kill most of the cells (> 90%), but a simple increase of the radiation dose will inevitably increase the chance of damaging the surrounding normal tissues (11). Therefore, assessing the proportion of hypoxic to oxygen-rich cells in the tumor is of great significance for determining the appropriate timing of radiotherapy. Adjusted fractionated irradiation should be considered basing on the extent of tumor re-oxygenation. The re-oxygenation time of hypoxic tumor cells provides a basis for clinicians to make a decision of re-radiation (12). In this experiment, the degree of hypoxia in the tumor site of 48 hours group was lower than that of Aimmediately and A24 h groups, indicating that re-oxygenation occurred in the hypoxic cells of the tumor. Regarding this, one more radiotherapy for the tumor site at this time can achieve better results than at 24 hours after the first radiotherapy.

HIF-1α is an important transcription factor in tissues that responds to the hypoxia microenvironment. HIF-1α can let tumor cells adapt to hypoxia microenvironment formed due to the rapid proliferation by regulating various biological processes including glycolysis, angiogenesis factor, vascular endothelial growth factor (VEGF) and 3-(5’-hydroxymethyl-2’-furyl)-1-benzylindazole (YC-1) (13-17). Its content can also predict the efficacy of radiotherapy on tumor (18, 19). HIF-1α has an oxygen-dependent degradation region in the polypeptide region and is strongly dependent on oxygen. HIF-1α is easily degraded in oxygen-rich condition, so it is almost undetectable in normal cells. But the hypoxia condition increases the protein stability of HIF-1α, resulting in the block of HIF-1α degradation and its continuous accumulation in tumor hypoxic cells. Re-oxygenation of hypoxic cells can effectively inhibit HIF-1α production, thus the amount of HIF-1α can also reflect the re-oxygenation state of hypoxia within tumor (20, 21). In conclusion, our results showed that most of the hypoxic tissues in tumor had different levels of HIF-1α expression, and its expression was significantly different with the different treatments; HIF-1α expression had good correlation with tumor hypoxia imaging. Our findings strongly proved that 99Tcm-MNLS tumor hypoxic imaging is likely to accurately predict the changes of the hypoxic state of the tumor.

As the main point of the study findings, we can say that 99Tcm-MNLS tumor hypoxic imaging can truly and accurately reflect the changes of tumor hypoxia.

99Tcm-MNLS tumor hypoxic imaging expected to become a non-invasive method for the detection of the extent and scope of tumor hypoxia, and to provide a strong basis for the determination of tumor fractionated radiation time.