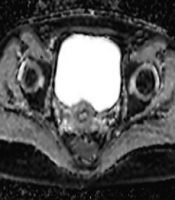 In the magnetic resonance imaging (MRI) of many tissues, apparent diffusion coefficient (ADC) values vary with age. In the literature, there are no studies in which normal cervix ADC values and their relationship with age is analyzed.

To evaluate whether changes occur in ADC values with aging in the uterine cervix with 3-Tesla MRI.

Female patients aged between 18 and 70 years who were found to have lower abdominal diffusion-weighted magnetic resonance imaging (DWI) in the radiology database from December 2017 to May 2018 were evaluated. All DWI examinations were performed using a 3-T MR with 2 b values (b = 50, 800 s/mm2). A total of 161 patients were divided into two groups according to their menopausal status (premenopausal n = 106, postmenopausal n = 55). To evaluate the correlation between the age of the patient and the ADC values, Pearson correlation analysis was performed.

Diffusion-weighted magnetic resonance imaging (DWI) is a noninvasive imaging technique that provides information on water proton mobility. This can make subtle microscopic abnormalities in tissue more obvious, thereby providing good tissue characterization. It is sensitive to the diffusion of water molecules in tissues, resulting in information on the extracellular space, tissue cellularity, and cellular membrane integrity (1).

The main initial clinical application of DWI was to detect acute cerebral ischemia in the brain and afterward expanded to detect several brain disorders (2). DWI was used to reveal microscopic details of tumor-like cellular density and proliferative activity (3-5). DWI can be used as a tool for characterizing microstructure of the tissue and some studies proposed that DWI might help to differentiate malignant and benign lesions in such tissues such as breast or thyroid (6, 7). It has also been shown that DWI with advanced sequence designs has the potential to distinguish between differentiated and undifferentiated subtypes of thyroid carcinoma (8).

Today, DWI is used in the detection and characterization of malignancies, as well as in the evaluation of treatment success and detection of recurrence in abdominal malignancies (9). DWI has become a routine sequence in female pelvis imaging and is also used widely in uterine cervical cancer. The main uses of DWI in the uterine cervix are tumor detection, staging, lymph node differentiation, and treatment evaluation (9-16). Apparent diffusion coefficient (ADC) values enable the differentiation of cancer tissue from normal cervical tissue with high diagnostic accuracy (11). In addition, the potential ability of DWI to indicate histologic subtypes of cervix cancer has been shown (10, 11, 14). ADC values of cervical tumors can represent tumor cellularity, which provides for the evaluation of histologic tumor grade through radiologic imaging (14-17). Lower ADC values may be related to poor prognosis (11). Pre-treatment ADC values were found lower in patients with complete response after treatment when compared with partial response (12). When evaluating the strength of the magnetic field, it has also been shown that 3 Tesla (3T) MRI contributes a significant benefit in detecting local and distant metastasis of cervical carcinoma then 1.5 T MRI (17, 18).

There are several studies of age-related ADC value changes in the normal appearance of several normal-appearing tissues such as the prostate, vertebra, and muscles (19-21). In children, age and vertebral body level-dependent differences in ADC values occur due to varying composition and cellularity (20). ADC values of both the peripheral zone and central gland of the prostate gland increase with age (21). As our knowledge in literature, there is no study about age and normal cervix ADC values.

The aim of this study was to evaluate if there was a correlation between ADC values and age for the uterine cervix with 3T MRI.

This study was conducted in the Department of Radiology of a tertiary hospital. Electronic records from December 2017 to May 2018 were analyzed retrospectively. Patients with lower abdomen MRI and DWI for various reasons were screened and compiled from the radiology archive. The cervicovaginal smear results of the patients were evaluated from the archive. Patients with both upper and lower abdominal MRI and only lower abdominal MRI were evaluated. Among 655 women who underwent lower abdominal MRI and DWI, 161 women met the inclusion criteria: aged between 18 and 71 years, and had a normal cervicovaginal smear. Patients with gynecologic malignancy, extra-gynecologic abdominal malignancy, and cervical mass, abnormal cervical cytology (n = 4), numerous nabothian cysts (n = 3) and those who had undergone hysterectomy (n = 98) were excluded from the study. A total of 161 patients were divided into two groups according to their menopausal status. Menopause was accepted as 1 year without menstrual bleeding; all of the patients had experienced menopause naturally. A total of 106 patients were in the premenopausal period, and 55 patients were in the postmenopausal period.

All DWI examinations were performed using a 3T MR (Siemens Magnetom Skyra, Erlangen, Germany) using transverse diffusion-weighted echo-planar imaging sequence. The ADC values were calculated from two different b values (b50 and b800 seconds/mm2, repetition time [TR] / echo time [TE]: 6800/46, slice thickness/gap: 4 mm/1 mm, echo time: 31 ms, field of view: 280 mm × 270 mm) and ADC maps were reconstructed with these values. The mean ADC values were calculated by manual placement of circular regions of interest (ROIs). The ROI diameter was the largest (with minimum 4 mm diameter of ROI), thus it was possible to exclude the cervical stroma and mucosa (Figure 1). To increase measurement accuracy on ADC maps, ADC maps were matched with the T1-weighted sequences. The ADC values of the cervix were measured three times on the axial ADC maps in the slice of where the cervix was seen most voluminous by the same researcher (10 years of experience). All measured ADC values were recorded as a mean ± standard deviation for each measurement. Then, the mean value of the measurements was calculated for each patient by dividing the sum of ADC values by three. ADC values of the cervix were measured 3 weeks later by the same researcher another three times and the mean value of the ADCs was calculated to evaluate intraobserver variability. A, Patients b50 image at the level of the cervix. B, Apparent diffusion coefficient (ADC) map of the same slice. C, Measurement with regions of interest (ROI) of ADC value of cervix is seen.

The SPSS statistics for Windows version 17.0 was used (SPSS Inc., Chicago, Ill, USA). The mean and standard deviation (SD) values of parameters were used to describe scale variables. Before analyzing the differences, the Kolmogorov-Smirnov test was used to define the normality of the parameters. Since the variables were found to be normally distributed due to Kolmogorov-Smirnov test, the independent samples t-test was used. To evaluate the relationship between variables because the variables were normally distributed, Pearson’s correlation test was used. The receiver operator characteristics (ROC) curve analysis was used to establish the cut-off point for the ADC value. To determine the locally appropriate cut-off value for the highest Youden index (sensitivity + specificity - 1) was considered as the optimal cut-off value. Intraobserver variability for cervix ADC measurements were analyzed by calculating the interclass correlation coefficient (ICC: 0.00 - 0.20 = poor correlation, 0.21 - 0.40 = fair, 0.42 - 0.60 = moderate, 0.61 - 0.80 = good, and 0.81 - 1.00 = excellent). P values < 0.05 were considered statistically significant. Table 1. Comparison of Age and ADC Values Between Premenopausal and Postmenopausal Groupsa ADC value alterations with aging and menopausal status have been presented in this study. A negative correlation between aging and mean ADC values was revealed. Several studies showed age-related ADC value alterations in normal tissues such as the prostate, vertebra, and muscles (19-22). To our knowledge, no study has reported on age-related changes of cervix ADCs in the literature.

Multiple MRI parameters are associated with aging in muscles, and MRI can also be used to evaluate premature or abnormal aging of muscles (19). Yoon et al. showed that DWI could be used as an imaging tool to evaluate aging of tissues. In a study performed on children in 2018, it was shown that ADC values of the vertebra and intervertebral disks changed with the age groups and locations (20). Other studies revealed that ADCs of normal prostatic tissue changed by age, which could be a prognostic marker for evaluating prostate cancer (21, 22). In our study, we found that as age advanced, the cervix ADC value decreased (Figure 2), which may be pertinent to the evaluation of cervix lesions in premenopausal and postmenopausal women. In addition, the ICC of intraobserver consistency of ADC measurements was found as good in our study, which shows that it can be consistently used in measurements.

Cervical cancer is one of the malignancies in which screening is performed effectively around the world. Today, precancerous lesions of the cervix are effectively treated with screening, and cervix screening provides early diagnosis. Imaging methods have an important role in the management of disease as well as in gynecologic examinations. Advanced imaging techniques are not recommended in the International Federation of Gynecologists and Obstetricians (FIGO) staging; however, imaging should be used appropriately to guide treatment (28). Several studies showed that ADC value, which is 1.50 mm2/sec×10-3 in the normal uterine cervix, was decreased in cervix cancer (10, 14). In study, the mean ADC value was 1.26 mm2/sec×10-3 in normal uterine cervix with 3T MRI. In the study by Liu et al., the potential ability to differentiate between normal and cancerous tissue in the uterine cervix was shown (10). Therefore, the ADC value might be helpful in distinguishing benign, premalignant, and malignant tissue, as well as in gynecologic examinations and pathologic diagnosis. In our study, we did not include malignant and premalignant lesions; however, studies are needed to evaluate the effects of aging in cervix on malignant and premalignant lesions. Prospective studies that also include precancerous lesions of the cervix in a larger population are needed. For this reason, cervical ADC changes with age could be useful for clinical correlation.

DWI might be used in the diagnosis of cervical cancer in some suspicious cases, as well as in the management of cervical cancer. The current recommended treatment for early-stage cervical cancer is radical or modified radical hysterectomy (29). In addition to surgery, radiotherapy plays a critical role in the management of cervix carcinoma (30). DWI has been extensively used in the evaluation of the response to radiotherapy in cervix neoplasias. In a study in 2009 from China, it was shown that before treatment, ADCs for complete response were significantly lower than in partial response (12), suggesting that measurement of ADC values is important in cervical neoplasias. ADC values of tumors may also vary due to the age of the patient, because the ADC changes in the normal cervix with age. Studies are needed to evaluate if there are changes of ADC values of malignant lesions with age in the cervix.

One of the main limitations of this study is that due to the retrospective design, the two groups consisted of an unequal number of subjects. Another limitation is that it did not include precancerous lesions.

In conclusion, the ADC values of the uterine cervix were inversely correlated with age, which is probably linked to alterations in cellular and extracellular matrix changes. This is the first study to show ADC value alterations with age and menopausal status.