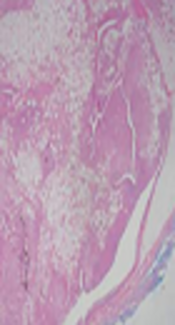 A phyllodes tumor is an uncommon breast tumor with a large, rapidly growing tendency (1). Phyllodes tumors can be benign, borderline, or malignant, and the prevalence of malignant tumors is varied but rare (2, 3). A malignant phyllodes tumor usually shows fibrosarcomatous differentiation and rarely shows other heterologous sarcomatous elements (4). On ultrasonography (USG), most of these tumors exhibited lobulated contours, smooth margins, hypoechoic echotexture, with posterior acoustic enhancement. Malignancy may be suspected if the tumor contains cystic space, or if it is with an irregular shape or non-circumscribed margin (5-7).

A 62-year-old female patient visited our clinic with a palpable mass in her right breast. She had first noticed this tumor six months before her visit. The mass was a 4cm sized firm and fixed mass in the upper outer quadrant of her right breast. There was no familial or psychosocial history related to breast disease.

Five years prior, she had visited an outside hospital with similar symptoms. On mammography in that visit, the mass was observed as a 2.5 cm sized oval circumscribed equal density mass with a radiolucent halo at the mid outer portion of her right breast (Figure 1). Excision and biopsy were performed in our hospital, because the mass was palpable and showed a relatively fast-growing tendency. The mass was diagnosed as a borderline phyllodes tumor, and the resection margins were positive for the tumor cells. The patient had taken serial follow-up mammographies at the outside hospital before returning to our hospital (Figure 2). On mammography taken two years prior, a newly developed mass was found in her right breast (Figure 2A). On mammography taken six months prior, the mass was observed to be larger, shown as a 3cm sized oval indistinct equal density mass, with heterogeneous internal fat components (Figure 2B). The tumor then grew larger, to 4cm in size, with more dense and lobulated morphology, so she returned to our hospital (Figure 2C).

Serial mammography with craniocaudal (CC) and mediolateral oblique (MLO) view of the right breast. Two years (A), six months (B), and one day (C) before she returned to our hospital. Newly developed 2 cm sized round circumscribed equal density mass (arrows) in the upper outer quadrant of the right breast (A). The size increased to about 3 cm, the margin became indistinct, density increased, and a new heterogeneous fat component was observed (arrows) (B). The size increased to approximately 4cm, and the density increased (arrows) (C).

On USG, the mass was an oval indistinct heterogeneous hyperechoic mass with cystic portions, and color Doppler ultrasound showed minimal internal vascularity (Figure 3). Since the margins were indistinct and the size rapidly increased, the likelihood of malignancy was considered high and subsequently classified as breast imaging-reporting and data system (BIRADS) category 4c. Core needle biopsy was performed for both hyperechoic and cystic portions, and the mass was diagnosed as a fibroepithelial lesion with atypical mesenchymal cell proliferation. Excision and biopsy were subsequently performed on the mass because the mass was suspected to be malignant. Gross examination showed an ill-demarcated gray-white rubbery mass, measuring 4.0 × 2.4 × 1.7 cm. Upon microscopic examination, the tumor showed a leaf-like growth pattern and hypercellular stroma (Figure 4A). The stroma consisted of severe pleomorphic polygonal to spindle cells with lipoblasts (Figure 4B and C). Finally, the mass was diagnosed as a malignant phyllodes tumor with liposarcomatous differentiation. Microscopic findings of the tissue obtained after excision and biopsy. The tumor had a leaf-like growth pattern with marked stromal hypercellularity. (hematoxylin and eosin (H&E) × 40) (A). The epithelial component showed a benign-looking appearance, the stromal component composed of severe pleomorphic polygonal and spindle cells (arrow) with dispersed lipoblasts (arrowhead). (H&E x100 and ×400) (B, C).

The surgical resection margins were negative for tumor cells, and the patient returned to our hospital 6 months after surgery. She underwent follow-up evaluation including mammography, breast USG, computed tomography of chest with magnetic resolution image of the breast, and there was no evidence of local recurrence or distant metastasis. Because the mass was completely removed and there was no evidence of recurrence, we decided to do an ultrasound every 6 months without any other medical treatment.

On mammography, most of the phyllodes tumors were found as a round shaped, circumscribed marginated, and high density mass, with large and fast-growing tendency. A lucent halo caused by a fat component can localize the margin of the mass. Calcifications are rare because of their rapid growth (9). In our case, the mass showed typical features on mammography five years ago, with an oval circumscribed equal density mass with a radiolucent halo. The re-emerged mass appeared similar at first but evolved as an oval indistinct high-density mass, with heterogeneous internal fat components. The differences in these mammographic findings can be interpreted as the difference between malignant potentials.

On USG, most of the phyllodes tumors exhibited a lobulated contour, smooth margins, mild hypoechoic internal echo, and heterogeneous internal echo pattern (5). According to Liberman et al. most of phyllodes tumors exhibited hypoechoic internal echotexture and posterior acoustic enhancement and the presence of cystic spaces on USG was known to be more common in malignant cases (6). According to Kalambo et al. an irregular shape, non-circumscribed margins, and/or mass size > 7 cm may indicate more borderline and malignant subtypes of phyllodes tumors (7). In our case, the mass was observed as a mainly hyperechoic mass, with oval shape, indistinct margin, and cystic portions. It is noteworthy that the mass was hyper-echogenic unlike usual cases, and the mass was with cystic portions, increasing the probability of malignancy.

Most phyllodes tumors are surgically treated and full mastectomy is recommended. If the mastectomy is not performed completely or if the resection margin is positive, recurrence may occur (10). The recurrence occurred in about 21% of all cases, most of which occurred within 2 years after surgery (1). In our case, recurrence may be suspected, because of the positive surgical margins seen in the previous surgery and the reappearance of the tumor near the previous operation site.

Our case report included serial mammographies, USG images including Doppler USG, and microscope slides with pathologic explanations, compared to the previous case report, which only presented one USG image. However, since there were only two related case reports, there is a limit to the explanation of the association between liposarcomatous differentiation and hyperechoic appearance.

In conclusion, we can identify several potential rare features of various and unpredictable phyllodes tumors through our case report. First, malignant phyllodes tumors may appear as hyperechoic on USG, and second, they may show liposarcomatous differentiations, with these two factors possibly being related. In addition, phyllodes tumors can recur if they are not totally resected and they can show different malignant potentials from the previous tumor.